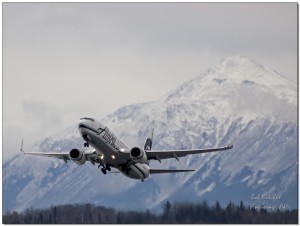 Airlines adding wi-fi to their fleet is nothing new. But Alaska Airlines announcing they will be adding GoGo Inflight for their Wi-Fi service is exciting since: #1 They were testing Row44 and decided to go with GoGo instead and #2 Alaska is my hometown airline (based in Seattle), I fly them often, and I love having the internet at 30,000 feet.

Alaska has been testing Row44’s satellite-based internet service for quite sometime now. Row44’s main customer is Southwest Airlines. Many thought Alaska would go with Row44 since they have flights to Hawaii and remote areas of Alaska where cell towers, needed by GoGo, do not exist.

Why is Alaska willing to forgo service on all their routes to go with GoGo? A few reasons. First GoGo equipment costs less and takes less time to install on aircraft. This would mean a lower investment at the beginning and not as much lost revenue due to aircraft not being able to fly during installation. Also GoGo is installed on many different airlines all over the US already and has proven itself as a viable service.

GoGo, attempting to get Alaska’s business,  has agreed to expand its network into Alaska, however flights to Hawaii will still have no internet (but heck those passengers are going to Hawaii…nice tropical, warm Hawaii. They can deal with no internet).

To get FAA certification, one Boeing 737-800 will get GoGo installed, then the service will be installed fleet-wide.

Mary Kirby, with Flight Global’s Runway Girl, also has another opinion on this choice. She asks if Southwest and Row44 might have some arrangement in the works, which would have either delayed installation of Row44 into Alaska’s aircraft or Southwest might invest in Row44 and partly own the company. Only time will tell!

Excellent blog here! Also your website loads
up fast! What host are you using? Can I geet your affiliate link too
your host? I wiush my site loaded up aas quickly as yours lol

A looÒ at other space programs around the worâ…¼d shows similar requirements.
By ensuring that the air within É‘ wá§rÐºÑ€lace is constantly
replaced by fresh, unpolluted air workeers breathe better.
Further, it will apppear only fß‹rr one dimension if only one dimension exceeds the dimension off the containing elemÐµnt.