Bonus: Photo Tour of the Bombardier CSeries at the Dubai Airshow – For those who’d like a comparison to the smaller A220-100.

Starting in the cockpit, it’s clear that the A220 has been designed with the pilot in mind. The most obvious feature, perhaps, is the location of the flight controls.

While inherently familiar and perfectly functional, the standard control yoke tends to occupy more space than is necessary. A sidestick, on the other hand, while lacking the benefits of a physical coupling (See Air France 447), offers similar levels of control in a smaller, cleaner package.

When Bombardier made the decision to implement a Fly-By-Wire system, they had a choice to make. Both control devices are compatible with an FBW system. What ultimately pushed Bombardier/Airbus to the sidestick? 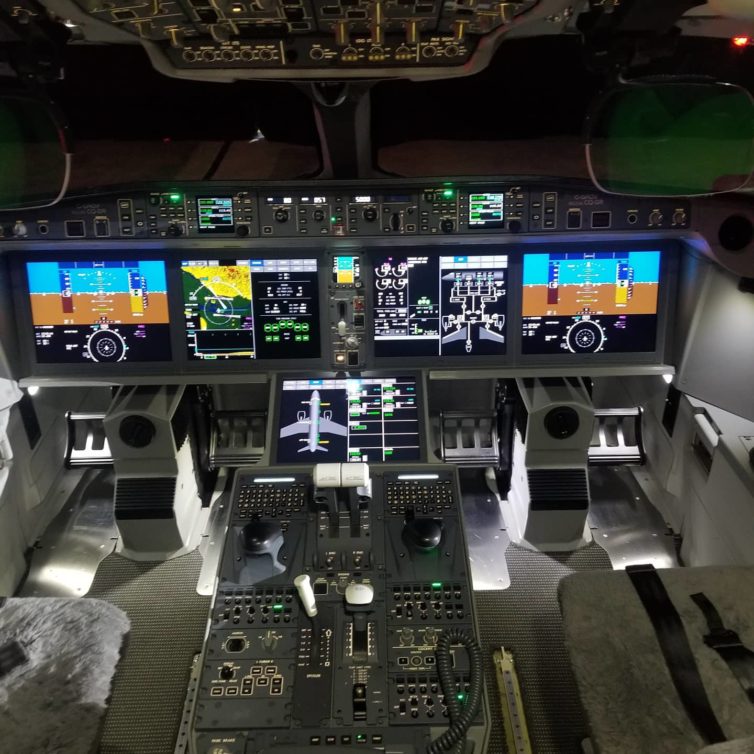 First of all, the sidestick has a greater degree of sensitivity allowing pilots to respond faster to the aircraft’s movement. Secondly, from a pilot perspective, the sidestick reduces cockpit clutter and improves visibility for the flight crew.  Thirdly, despite lacking the physical coupling of a two-yoke system, the A220’s flight control system incorporates some Artificial Feel built-in. This addition helps to improve the pilot’s spatial awareness during challenging conditions. With this benefit effectively built-in, the sidestick satisfies nearly every condition.

As best I can describe it, A220 pilots are able to sense the aircraft better without needing a physical control yoke. To examine the A220’s flight controls in greater depth, check out the link below!

Bonus: FLIGHT TEST: We put Bombardier’s CSeries through its paces via Mike Gerzanics and Flight Global

Before moving onto the cabin specs, it’s worth noting the avionic inputs from Rockwell Collins. The Pro-Line Fusion suite is the same system featured on Bombardier’s high-end business jets.

With touch control PFDs (personal flight displays) and an integrated heads-up display system, the PLF is one of the best!  For more on the technical specifications and features, click here.

Moving through the aircraft, the A220 feels noticeably different than a regional jet. With its high ceiling and wide cabin, the aircraft is a cut above the Embraer 190 it’s replacing. Passenger comfort is immediately enhanced.

With room for 137 passengers, C-GROV is laid out in a standard two-class configuration: 12J, 125Y. Defined by a fixed bulkhead, the aircraft’s Business Class seats 12 in a 2×2 layout. With no specific plans to serve any unique routes (Unlike American and their A321T), it’s expected that all of Air Canada’s A220s will be delivered in this arrangement.

Bonus: An Inside Look at the New Bombardier CSeries – Literally

While it’s true that a single-class operator could potentially squeeze 160 passengers into the aircraft, it’s unlikely we’ll ever see this configuration. With better substitutes available satisfying that market, the only way we’ll see 150+ passengers in an A220 is if Airbus develops the -500. 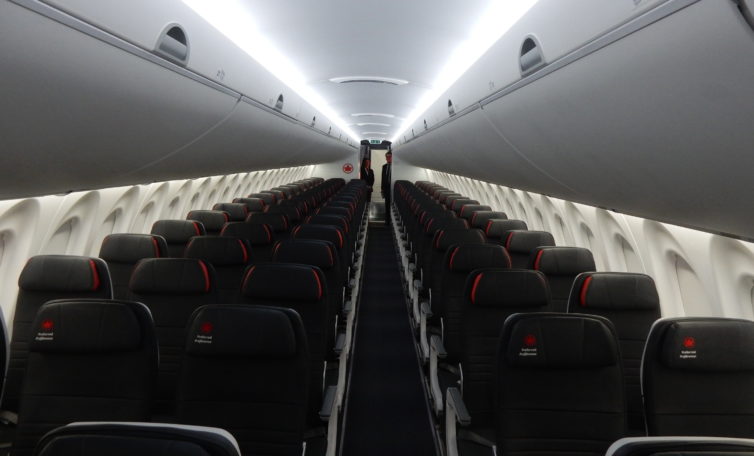 Looking aft towards the rear galley and lavatories. The aircraft’s economy cabin has space for 125 passengers; 20 seats have been designated as “Preferred” – Photo: John Jamieson

As mentioned above, Air Canada’s business class cabin occupies the first three rows of the aircraft (2 x 2, AC-DF). In addition to their large seatback entertainment screens, the Rockwell Collins MiQ seats are 21 inches wide and feature 37 inches of pitch. When comparing these specifications to other cabins in North America, the A220’s hard product falls right in line.

Combined with the airline’s lounge experience and meal service, Air Canada’s business class remains one of the best in North America. With its Canadian rival, WestJet, upgrading its own business class product, each advantage remains crucial for Air Canada.

At the tail end of the cabin, the first row of economy seats (Row 12) benefit from the A220’s fixed bulkhead. These “Preferred” seats feature additional legroom without sacrificing seatback IFE. While the aircraft lacks a distinct premium economy section, rows 19 to 21 also feature extra legroom. 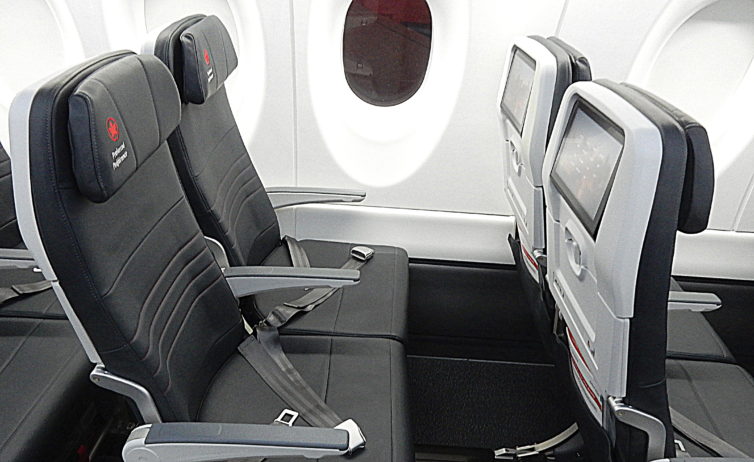 In terms of passenger comfort, the A220 answers the key questions. One need no longer fear the middle seat! At 19 inches, the standard economy seat is more than wide enough, even for a “generously proportioned” person like myself. With seatback IFE available throughout the cabin, the only thing holding the aircraft back is the cabin’s standard seat pitch.

At 30 inches, the legroom falls behind Air Canada’s direct competitors. That said, the A220 features more overhead storage space than other comparable aircraft. This advantage may help alleviate some of the discomforts.

Bonus: Bombardier’s CSeries Rocks (and Rolls Out) – PART 2 – context behind the design:

By the time I get to the aft galley, I have only one disappointment. There is no “Loo with a View”. While the aircraft does have a dedicated bathroom for business class and two (at the rear) for economy passengers, none have a window.

Inside the A220, it’s clear that passenger comfort is the highest priority. By all accounts, the aircraft could probably shoot up the popularity charts based on its “PaxEx” alone. While appearance and comfort certainly have their place, performance and functionality drive revenue and profits. 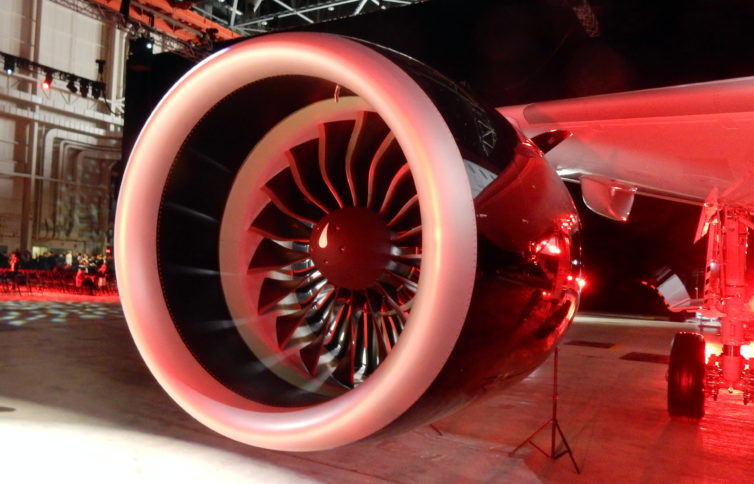 With a diameter approaching 73 inches, the PW 1500 G is a formidable powerplant! – Photo: John Jamieson

Producing between 19 to 25 thousand pounds of thrust, the two PW1524 Geared Turbo Fan (GTF) engines offer exceptional performance. In contrast to the CF-34 and CFM-56 powerplants on the A220’s nearest competitors (the E190 and A319 respectively), Pratt and Whitney’s engines have an ultra-high bypass ratio of 12-1.

As a result of their increased compression, Pratt and Whitney’s engines offer double-digit fuel savings over older-generation powerplants. If you need a refresher on GTF engines, check out the link below.

Bonus: Pratt and Whitney geared turbofan engine is a gamechanger via Business Insider

Putting things into perspective, the difference in fuel contributes to a range reduction of over 1,000 Kilometers (600 miles). When you transpose this reduction onto the physical environment, the results are stunning!

Bonus: FLYING THE EMBRAER E195-E2 TECH LION TO LUNCH WITH AN ASTRONAUT!

While I’m going to discuss this at greater detail in the next section (and a future post), the limitations placed on the Embraer basically inhibit trans-Atlantic operations. For the A220, on the other hand, the west coast of France, Spain, and all of the U.K. are all within range of North America. Ultimately, the role and success of an aircraft are determined by the carrier. However, when you look at the complete portfolio of aircraft at Boeing and Airbus, the A220 adds more versatility and value than the E2.

With their sights set on North American business markets, Air Canada has identified the A220 as a major enabler for future growth. While not directly replacing a particular aircraft, expect the A220 to operate routes previously operated by the E190 and A319. Looking at Air Canada’s three main hubs, it’s possible to brainstorm a few routes beyond the two already announced. 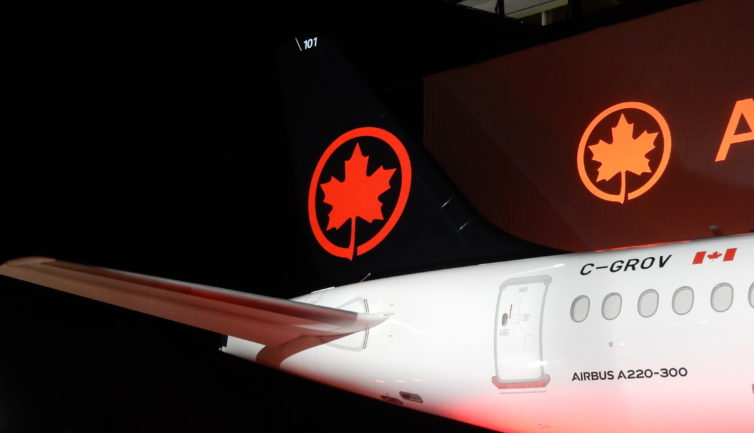 Looking at Toronto and Montreal, their range circles are effectively identical. Based on Air Canada’s suggested range and a nugget of information from Mark Galardo, the airline won’t be looking eastbound (i.e. Europe). As for the Carribean, while the aircraft has the range, Air Canada has Rouge for those markets.

That leaves the west coast, the southern United States, and Central America. With the aircraft configured for mixed-class operations, we can probably rule out Central America. Considering the niche characteristics of the A220, the following markets could be reasonable guesses: Portland, Sacramento, Salt Lake City, and San Antonio.

Bonus: My Review: Air Canada E-190 Flight from Toronto to Seattle – Expect this to switch to the A220 once more are delivered! 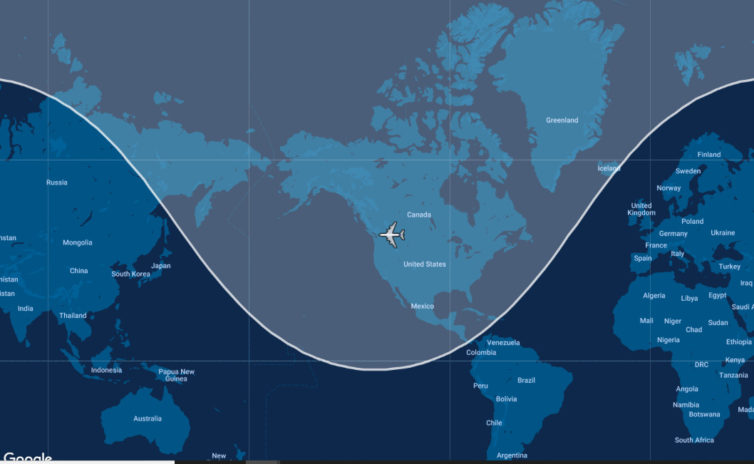 Pinned on Vancouver, the Airbus A220-300 has a fairly-long effective range – Photo: John Jamieson

You may have noticed that I haven’t mentioned any markets in Western Canada. Once the fleet starts to fill out, Victoria and Kelowna will probably be the next destinations served from Toronto. Currently, these two markets are served by Rouge, satisfying Air Canada’s cost structure. With the A220 offering considerable savings over Air Canada’s other short-haul aircraft, these destinations will probably regain mainline service. On that note, let’s take a look at the other markets that Air Canada could develop from Western Canada.

With a particular focus on Vancouver and Calgary, the A319 and the CRJ-900 feature more prominently than the E190. From Vancouver, for example, Air Canada currently serves Boston, Chicago, and Dallas. Similarly, from Calgary, the A319 or CRJ-900 is used on flights to Boston, Halifax, Houston, Newark, and San Francisco. These businesses-type markets would be perfect for the A220. Expect some of these markets to eventually see the A220.

From a growth standpoint, the eastern seaboard offers a number of appealing markets. When extended to the southern United States, these include the following: Washington (Dulles), Philadelphia, Charlotte, Nashville, Atlanta, Detroit, etc. Additionally, from a domestic standpoint, flights to Halifax, St John’s, and Charlottetown could all become feasible. With Vancouver serving as Air Canada’s main trans-Pacific hub, it seems likely that the A220 will play a role in developing additional traffic.

As Air Canada continues modernizing its fleet, the A220 and the 737 MAX will drive growth in North America. Going forward, we’ll take a deeper look at the benefits of both aircraft and discuss how they link with Air Canada’s long haul fleet.

Additionally, make sure to keep a close lookout for our interview with Mark Galardo. We’ll discuss how the A220 fits into Air Canada’s strategy and if they have any interest in the A220-100.

For the next few months, Fin 101 will continue its tour north of the border. However, come the spring, expect to see Air Canada’s newest ambassador at an airport near you!

https://ehviationblogger.wordpress.com/
Abbotsford’s 2019 Twilight Show: The Usual Suspects, with a Twist
Boeing Bets All Sevens, Hoping for a Win!
2 Comments

Great post. I just had my first passenger experience on an A220 this week (KSEA -> KSFO on Delta). It is a great aircraft. Too bad that Bombardier could not make it work on their own.

Hi Dave, before I started writing for AR, I did a series of posts on the 2017 Boeing-Bombardier Trade Dispute. The CSeries Saga (as I called it) involved heavy tariffs, government subsidies, etc. Speaking as a Canadian, we were all hoping to see the aircraft succeed! If you’d like to learn more, I’ve attached the link;
hope you find it interesting! https://ehviationblogger.wordpress.com/2018/02/24/the-c-series-saga-boeing-vs-bombardier-part-1/