The 767s will fly to Athens, Edinburgh and Venice, all departing from Toronto or Montreal (YUL). More destinations will be added to the schedule as rouge receives additional aircraft from Air Canada. Many of their vacation routes will be transferred from Air Canada as the rouge fleet grows. They’re planning to ultimately have 20 767s and 30 A319s, as Air Canada takes delivery of 787s and additional 777s. The new airline has its own operating certificate, but is wholly-owned by Air Canada. It’ll be integrated into AC’s website and Aeroplan frequent-flier program.

Air Canada has tried the “airline within an airline” experiment before, most recently with low-cost carrier Tango which only operated for 3 years, from 2001 to 2004. AC says that rouge will be different because of lower costs and a more favourable labour contract.  I expect that means rouge employees are paid less than Air Canada’s.

Rouge is also going to pack more passengers into their planes – their A319s will have 142 seats, compared with AC’s 120-seat A319s. Tighter seat pitch, for sure, but not as cramped as Allegiant Air’s 156-seat A319s.

Rouge’s In-Flight Entertainment (IFE) system is something new for Air Canada. All of the planes will be equipped with Wi-Fi, and passengers will be able to stream content to their own devices. But not all devices will be compatible with the system — at least at launch. In order to deal with the content producers’ concerns about piracy, only iThingies and laptop PCs can be used. If you have an Android or other device, you’re out of luck. Passengers will have to download an app to their iPhone or iPad before boarding, or connect with their laptop onboard. The charge for the IFE will be $5 for for rouge class, free for the others. Rouge starts Air Canada down the Ancillary Revenue path with this fee for IFE, along with charges for premium seating and advanced seat selection. 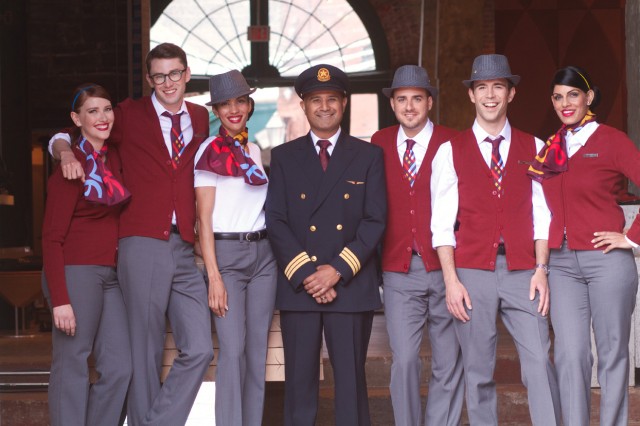 rouge flight attendants show off their new look. How about those hats?!

Rouge’s in-flight crew will have very different uniforms from AC and I think they look pretty good. “Our goal was to create a unique, welcoming and fashion forward look with lasting appeal that would also be practical and comfortable, ” Renee Smith-Valade, rouge’s Vice President, Customer Experience stated. “We developed our uniform and overall look with our partners in record time – about four months — with close attention to cost and making every effort to engage with Canadian designers for an end result that reflects our relaxed, fun, holiday atmosphere onboard.”

All of rouge’s flight attendants have received customized service excellence training at the Disney Institute in Florida. Before you get all goofy and start imagining mouse ears, do a bit of research into the Disney Institute. It’s an amazing facility that has hosted millions of professionals since 1986, helping companies develop and improve their organizational culture. I think it’s a great move, especially with a new start-up company. I hope it wasn’t just rouge’s FAs that went – I’m sure everyone would benefit.

So we have another brand-new airline in Canada, with trendy new uniforms and a spiffy new design on their planes. What do you think about Air Canada’s latest venture? Will they create a new revenue stream from vacationers or might they confuse their current customers with the new airline? And how about those ?  UPDATE – the uniform hat is more accurately called a “trilby“, which is a narrow-brimmed fedora.

Interesting that rouge has launched on the day we Canadians celebrate the birth of our wonderful country – July 1st, Canada Day. But rouge wants to fly us out of Canada!  Ironic, no?

Happy Canada Day to our Canadian readers, from all of us at AirlineReporter.com.

Impeccable service, Will Prove that Canada is a Innovator in the Airline Industry.