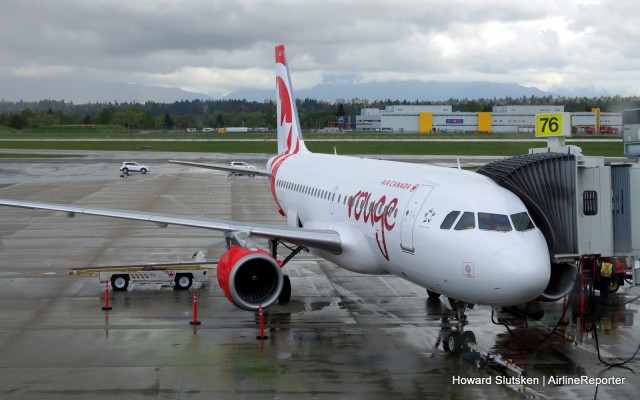 You may have read the recent commentary and analysis by AirlineReporter’s Bernie Leighton, “You Get What You Pay For Rant: Why Economy Class Is What It Is.”  I certainly did. It seemed fitting, then, that just a couple of days later, I was invited to Vancouver International Airport (YVR) for Air Canada rouge‘s first Western Canada flight.

Air Canada rouge is an “airline within an airline”, and is part of the Air Canada Leisure Group along with inclusive-tour operator, Air Canada Vacations.  The airline is positioned as Air Canada’s “Leisure” carrier, intended to get passengers to their vacation destinations.  Air Canada rouge launched last July 1st with flights from Toronto (YYZ) and Montreal (YUL) to Europe, the Caribbean, Mexico, and the U.S. In addition to specific vacation travel, Air Canada is hoping to make its unprofitable routes financially viable by a transfer to Air Canada rouge, which has lower operating costs. Bernie talked all about that, and CASMs and RASMs, in his rant.

By the end of 2014, Air Canada will have transferred 47 routes to rouge. Another seven routes new to the AC network will be operated exclusively by rouge. The just-announced Western Canada routes include YVR to Las Vegas, Los Angeles, San Francisco, Phoenix, and seasonal service to Anchorage.  From Calgary, flights will go to Las Vegas and Los Angeles.

The Air Canada rouge fleet is made up of Airbus A319s and Boeing 767-300ERs, transferred from Air Canada’s mainline fleet. As of the end of April, there were 15 A319s and four 767s flying for the leisure carrier. Ultimately, rouge may have up to 30 A319s and 20 767s, with the 767s coming into the fleet as Air Canada receives its new 787 Dreamliners. 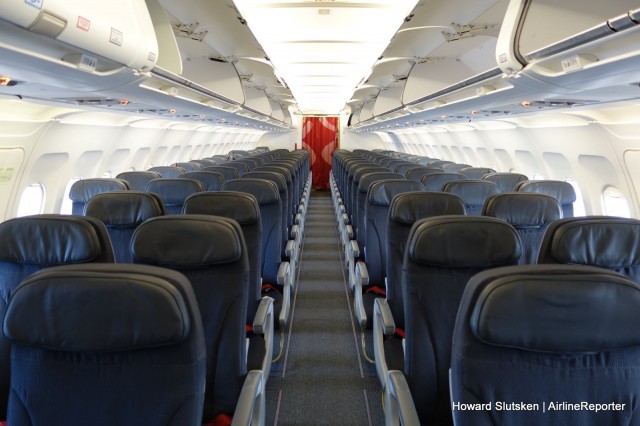 The transferred planes didn’t just get a new paint job, though. The interiors were reconfigured to a higher density, with low-profile seats.  Air Canada’s mainline A319s seat 120 passengers, and the rouge planes have up to 142 seats. The 767s changed from 211 seats on AC to as many as 280 seats in the Air Canada rouge planes. Most of the additional seating in the rouge 767s comes from the elimination of the AC Business Class “pods”.  Air Canada’s website shows two different configurations for both rouge aircraft types.

The A319 that I saw at YVR was on Air Canada rouge’s first flight to Las Vegas, and offered “three customer comfort options”. The 2-2 seats in AC Business Class on this A319 were replaced with a 3-3 “Premium rouge” configuration, but the middle seat of each seat block is not sold (similar to intra-European business class). Seat pitch (the distance between the rows) for Premium Rouge is 35″ on the rouge A319, down from 38″ or 39″ in J class on the AC mainline planes. The economy, or “rouge class” seats on both the mainline and rouge planes are about the same width, with the rouge seats a teeny-bit wider at 18″ versus 17.83″. But seat pitch is reduced from 32″ on AC  to 29″ on rouge. Seat recline has also been reduced from 4.5″ to 3″.  There was also one row of “rouge Plus” on the plane, with a more comfortable 35″ seat pitch. 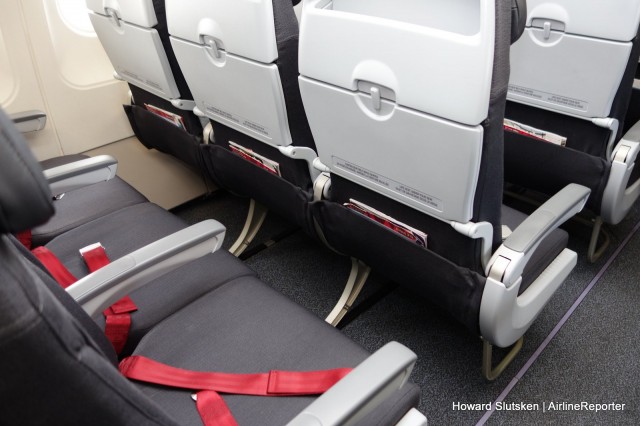 Low-profile seats on an Air Canada rouge A319.

By comparison, Air Transat, which is one of Air Canada rouge’s competitors in the Canadian vacation market, has seats between 16.5″ and 18″ wide in their A310 & A330 fleet, with a seat pitch of between 31″ and 33″.  And in an even higher density than rouge, the remarkably profitable low-cost carrier (LCC) Allegiant Air has managed to put 156 non-reclining seats into its A319s. Allegiant Air has been hugely successful in enticing Vancouver-area passengers to fly from Bellingham International Airport (BLI), just 20 minutes south of the U.S.-Canada border, with the promise of lower fares. You get what you pay for!

Not unexpectedly, fares on Air Canada rouge are lower than what passengers previously paid when the now-transferred routes were operated by mainline Air Canada planes and crews. 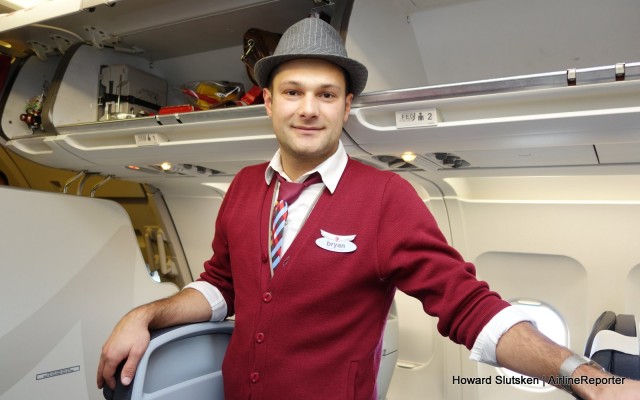 Rouge is also trying to differentiate itself from the mainline carrier by its in-flight service. Rouge crews go to the renowned Disney Institute for customer service “excellence” training. If my chats with the flight attendants are any indication, passengers can expect enthusiastic service during their flights. Cabin crews are decked out in a trendy uniform, including trilby hats, Lululemon headbands, and shoes from Vancouver designer John Fluevog. And the crews must adhere to a standard look, right down to makeup and hair styles. Shades of the 1960’s!

Air Canada rouge is one of the first airlines to offer a streaming wireless in-flight entertainment system (IFE) that rouge calls “player“.  The system has over 250 movie and TV titles, along with music playlists. So far, player will work with laptops and iThings. Support for Android devices is “coming soon”.  Access to player costs $5, and you can rent one of a limited number of iPads for another $10.  rouge sends out a pre-travel email to passengers reminding them to download and install the latest Air Canada app on their Apple device, or Adobe Flash for a laptop. There isn’t seatback power on rouge’s A319s, so passengers are advised to make sure their devices have a full charge.

What do you think? Will Air Canada rouge succeed where AC’s previous “airlines within an airline”, Tango and Zip, didn’t? Have you flown AC rouge – how was the passenger experience?  Is the recently criticism of AC rouge in the press and social media justified?  Leave us a comment!

I used to be an extremely frequent Air Canada flyer, I put the Super in Super Elite. I was actually planning to keep AC as my main airline when I moved to Washington. The steady downgrade in product with a return to the early 2000’s attitude of “you’ve no choice but to fly us” started in 2012. Thing is, no longer residing in middle of nowhere Canada- I did have a choice. No longer was I encumbered by golden handcuffs- I could cut my losses and run. No matter what people say, Westjet is not a real airline for frequent travelers. They have no business class product, no lounges, no alliance participation- they offer nothing and charge the same as AC. In fact, most of their marketing in Western Canada is “we never reduced your city to nothing but Zip flights to prove a point to our pilots!” That is great for most people. I agree, Westjet is actually a pretty fine transportation service (I will never call an LCC an airline, an airline is a term that carries weight). Thing is, they could not meet my needs. I hear you can earn AA EQMS on them now- so I may have to give them another shot when I am up North.

Air Canada, noticing that Westjet could charge the same fares as them for less product, found itself in a bind. Westjet got to keep more of the ripoff of the Canadian air travel duopoly because they weren’t stuck with labor agreements that treated their “human capital” as an actual value add. A moot point now that the government stands behind Air Canada in all labor relations, but I believe an important one that explains the motivation for Rouge. Create a fake airline “within an airline” and you can create new labor agreements that treat the “human capital” as a short-term cost- as they will want to quit and go elsewhere when they realize they cannot pay the bills.

If that was not enough, we have to turn to the fact that greed is good. Westjet’s unit cost on a 737-7CT is considerably lower than a mainline AC E-190. Unfortunately, it is also much lower than a standard configuration AC A319. Westjet, of course (due to the duopoly) can expect the same yields as Air Canada, but because their costs are so much lower- they keep more. Air Canada’d be irresponsible to not investigate that path. This is why I have always said that Rouge is not a leisure carrier and never will be. It is not about giving the customers choice also. I’ve got a rant sitting in editing right now that will further elucidate on this point- so I’ll get to another one.

What is Rouge? Honestly? It’s not an airline within an airline and it’s not a separate airline. If there was any real separation, flights could not be randomly “rouged” and “unrouged” within the GDS long after people had purchased actual AC tickets. Considering how the GDS, right now, is showing that YYZ-BGI (a Rouge route) is going to a 77L over the “high season” one has to wonder how the decision to rouge or not to rouge is made. Entire swathes of U.S. states have become “lower cost to us, same price for you” for reasons that still remain a mystery. The argument could be made that these routes had very little high-yield business travel, but at the same time I am very suspicious of this. United, for instance, flies aircraft from the same cities to the same airports with a proper 2-2 domestic business cabin. Now, if UA is having difficulty with these routes- they are all within the range of a contract CR2 or Embraer with no J… Just saying. So maybe there is a case for a proper business class?

If you live in a Rouged city and there is any choice (barring the joke that Aeroplan has become) of airline that will meet your Star Alliance AQM needs- fly them. Meet the minimum spend/milage requirement on AC by flying your family to Calgary to go see the Stampede or something.

I sincerely believe that Rouge deserves all the ridicule it gets because it is about reaping the profit from the customers in the most unabashed ways possible. It’s a joke. In five years Rouge will be another fare class (below Tango). Hey, does anyone remember Tango?

Rouge will follow in the proud Air a Canada traditions of Zip and Tango.

I just escaped a Rouge-ing (which, for our US friends, a Rouge is also the name of that point they give in the CFL when you miss a field goal kick and the ball isn’t returned by the defense) on the YYC-LAS route.

I booked an upcoming business trip for June back in the winter on mainline AC using an E90, and being a avgeek, I always keep an eye on my booking–of course. Bit of a surprise in April when I checked in to see I no longer had my window seat in a 2×2, but was in a middle seat of a 3×3 in the back of an A319!(no Rouge mention when logged into the confirmation either). Went on to AC website like I was booking the trip, and noticed there it was now Rouge, so that got me to call my corporate travel agent for a switch to Westjet.

The only reason I didn’t take WS to start was because I preferred the E90s on that trip, as I’m happy to fly WS anywhere in Western North America. With Rouge running these routes, WS is a no-brainer now.

I was looking into fares from Chicago to Ireland and Rouge came up as the best deal by about 200 bucks. I have a family of 5 and that would price difference would save ahold deal of money. I looked thru the site and was interested in the product, even the transfer thru toronto was quick. While i did not purchase the tickets, i would have flown this over the UAL nonstop. I used to have AA status and UAL status but rarely fly these days. I have become a bottom feeder, frequenting Spirit all too often. Give me my iPad and a few movies and the product is pretty much the same unless you are going for status miles