I was fortunate enough to attend the Dubai Airshow this year which was held at Al Maktoum International Airport from November 8th to 12th. As part of the various events and substantial flying program, I was invited along with my friend Bernie to attend a press conference and aircraft tour of the new Bombardier CSeries which was present on the static display.

The CSeries has been the center of much media hype and excitement even though it has not always been smooth sailing for the company. Despite the various challenges facing Bombardier at the present time, all the staff were incredibly positive and excited to showcase their aircraft on its first debut in the Middle East. Following a rather spirited press conference where many questions were posed by local media with regards to the regulatory and political complications of selling the aircraft to Middle Eastern Airlines, it was time for the AvGeek’s favorite moment: the aircraft tour! 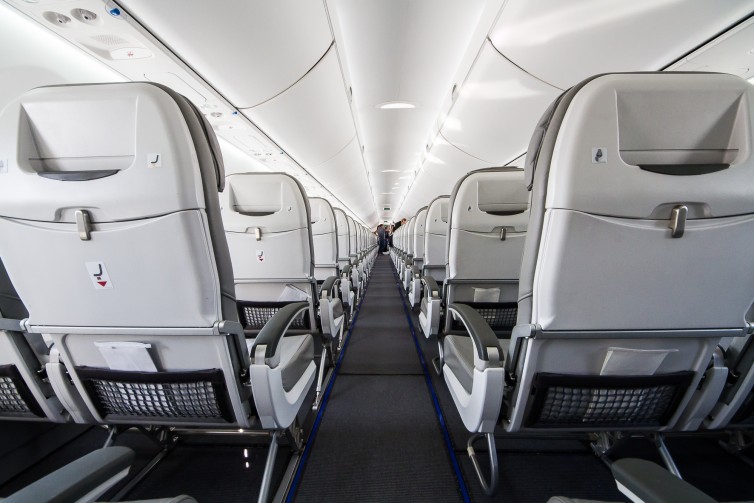 The CSeries cabin is billed as the widest in class – Photo: Jacob Pfleger | AirlineReporter

My first impression upon entering the aircraft was how wide the cabin is compared to similar regional jets in the same class. Bombardier claims to have the widest economy class seats on any regional jet in service. The economy layout will be 2-3 while the business class configuration will be 2-2, but I suspect most carriers will opt for the very popular “Euro J” business class, which means the same layout as economy with just the middle seat being blocked. 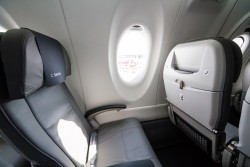 The Bombardier C-Seats are extremely comfortable and wide 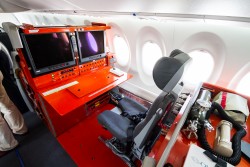 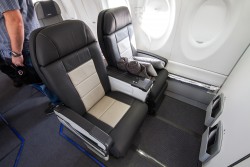 This aircraft is currently used as a test-bed meaning that whilst it does have a business and economy class cabin mock-up, there is also a flight test station within the cabin. This is where the engineers sit and monitor various parameters during flight. This was quite exciting to see and provided much AvGeek eye-candy and unique photo opportunities. 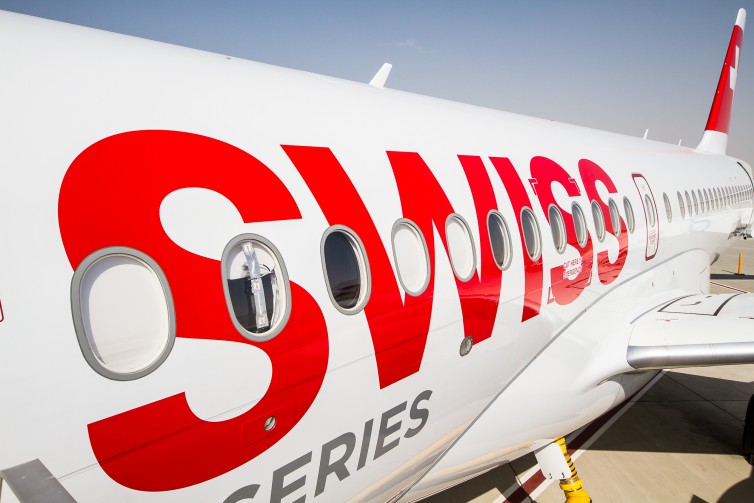 Don’t be fooled by the Swiss livery, this is indeed still a test aircraft – Photo: Jacob Pfleger | AirlineReporter

The aircraft windows are a little on the small side but still more than sufficient to look out of. The biggest wow-factor for myself on the aircraft was how spacious the rear lavatory is. The pictures do not do it justice — it really is huge especially compared to most 737 or A320 lavatories. 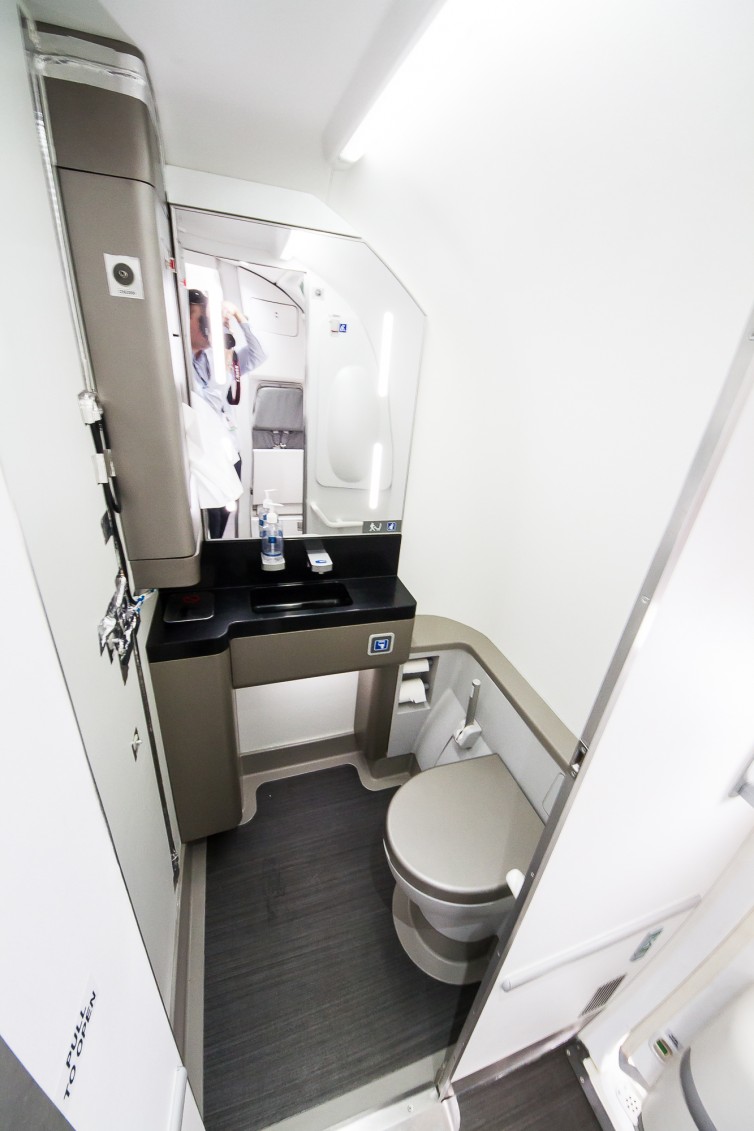 The CSeries lavatory really is quite spacious for a jet in its class – Photo: Jacob Pfleger | AirlineReporter

Of course, no aircraft tour is complete without a visit to the flight deck. The Bombardier CSeries cockpit does not disappoint. It is again surprisingly spacious for a regional jet and provides pilots with a wealth of information via four multi-function displays, as well as two electronic flight bag displays, and a captains side HUD (head-up display). In a production first, Bombardier has selected to equip the CSeries with a side-stick in lieu of the classic yoke seen on all other Bombardier models. This option once again increases the already generous space available in the cockpit. 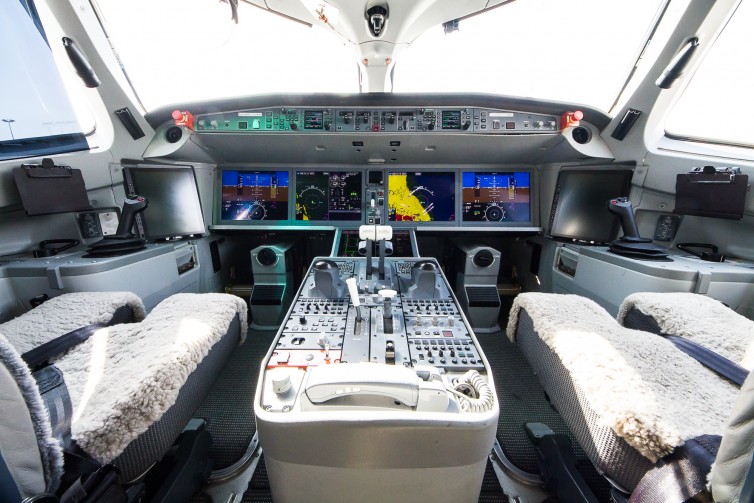 The spacious & modern flight deck of the Bombardier CSeries, complete with side-sticks which is a first for Bombardier – Photo: Jacob Pfleger | AirlineReporter

The CSeries is not only an impressive aircraft from a passenger and crew perspective but also in terms of economics. Bombardier claims that the aircraft has the best-in-class economics and efficiency with a 20 percent fuel burn advantage over other in-production aircraft. The Pratt & Whitney PurePower PW1500G engines and advanced aerodynamics help deliver an aircraft which outperforms in terms of take-off performance even in hot and high scenarios – making it an ideal candidate for Middle East operations. 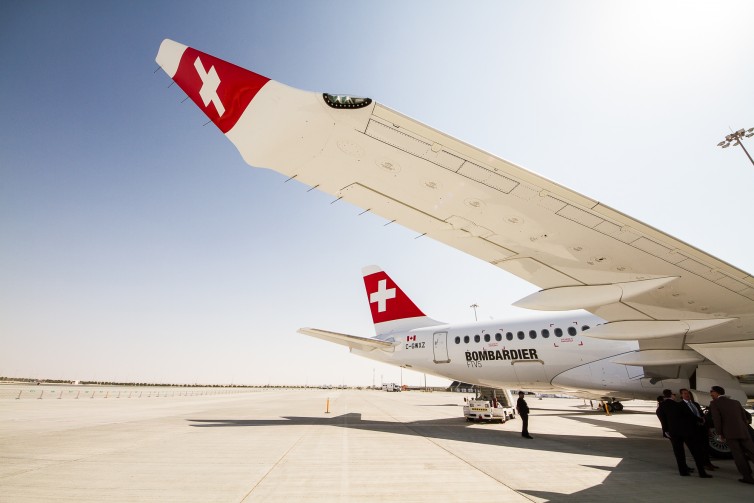 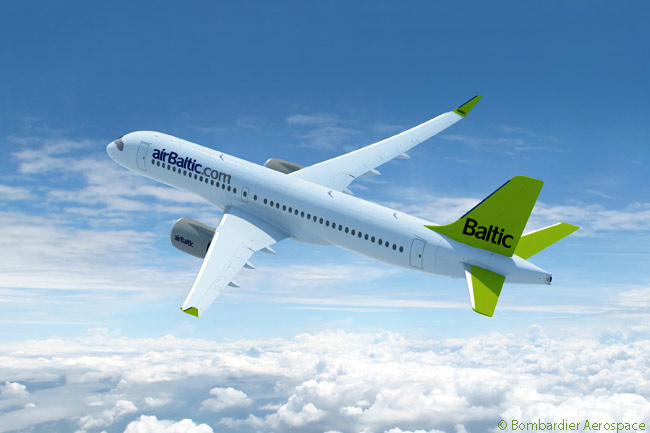 Air Baltic will be the launch customer for the CS300 – Image: Bombardier Aerospace

Despite the various challenges facing Bombardier at the present time, the Bombardier CSeries has the potential to be a successful aircraft. It will fill a vital gap in the 100-150 seat aircraft market and will deliver the largest regional jet in production with a 150-seat capacity. This will mean airlines will be able to operate a 150-seat aircraft with regional jet economics in play.

impressive. Always think of the Bombardier as this small little plane. Congrats Bombardier with this masterpiece. Thank you Jacob for this very good article.

Looks good! Hopefully Bombardier can finally get this bird into service. Despite the fact that they are built and tested 2 hours away from where I live, I don’t know if I will get to fly on one once they reach production. The only Canadian airline interested is Porter, and only if Toronto city council sides with them over condo owners (which isn’t likely to happen) on the topic of jets at Billy Bishop airport.

Is the CSeries specifically marketed as a regional jet? It’s seating capacity and 2-3 cabin width don’t scream RJ to me. Plus, if it’s designed/intended to replace 737 Classics, I don’t see how it wears the RJ moniker. Just curious.

I have long been of the opinion that #CanadianPlanesSuck. Nothing against our friends to the north, just that I think the Dash 8 and entire family of CRJ are miserable, so I avoid them at all costs. From what I see here, this plane might force me to rethink my opinion. We shall see.

Oh JL, you are so close. Just remove about ten letters from that hashtag and you’ll be perfect. The Fanta-C-Series is all the proof you ever need to know about Eastern Canadian ego. Sure, they got some stuff right- but just wait for my story about the press conference revelations.

Also, the Dash-8 does not suck. It is an extremely versatile aircraft. Especially the originals!

Every time I see that Q400 fly overhead so effortlessly, I think to myself -buy more stock!

While I’m not a fan of the CRJ series, I really like de Havilland Canada’s planes. Yeah, they are not big aircraft like Boeing and Airbus churn out. But the Otter and Twin Otter are some of the most versatile short field aircraft ever built.

I think the Dash 8 is gets under-appreciated as “one of those propeller planes”. From a passenger perspective, I’d happily ride one of those any day over a CRJ – it’s way roomier and has actual headroom. In fact, on United at least, row 7 on the Dash 8 has (in my experience) the most legroom of any economy seat in the fleet.

You have a mistake. The cockpit has five displays, not four. The 5th is in the middle below the other four.

Interesting article about a plane that is late to the market as you can get. For the sake of Bombardier and the employees who work there, I hope for them it is successful. Tour comment about the windows caught me attention. I absolutely HATE the smaller CRJ’s because of their windows. They are geared for 5 year olds, not adults. Anyone who has flown on one of the 50 seaters must agree with the distaste for the windows but from what you say, looks like they are going to do a redux with the CS series. Ugh!

I’ve always found it funny that we call them regional jets. This aircraft is being marketed for the 100-150 seat market which does put it the same category as the A318/319/320 and the smaller B737s. If you look at the range, it is also right up there with those non regional planes, so shouldn’t we be calling all planes in this range a “regional plane?” At least here in the US if one of our carriers does pick it up, it will have to be flown by mainline pilots due to scope clauses.

Did they change the window size? The AirlineReporter site said “The CSeries will sport larger windows than its competition, allowing more natural light and a bit more shoulder room. The CSeries will have windows measuring 11à—16″³, which are about the size you would find on a Boeing 777”

Couple of comments on all of the posts and original report.
This is not a regional aircraft at all.
Fuselage cross section size is competing against A321/A320/A319 & B737 family of aircraft. Just because the launch models CS100 & CS300 has 150 seat limits at reasonable seat pitch (up to 165 seats with tight seat pitch). Wait for the CS500, then say its a regional jet ! Hopefully Bombardier will realize this model.
Agree with KWH, window size is larger than what you find on mentioned competitors.
Shame the original report doesnt mention the new technology this platform also provides. Aluminum Lithium fuselage and composite wing, CWB, Hstab/Vstab and tailcone.
From a proud retired Bombardier Structural Integrator who worked on the Cseries.