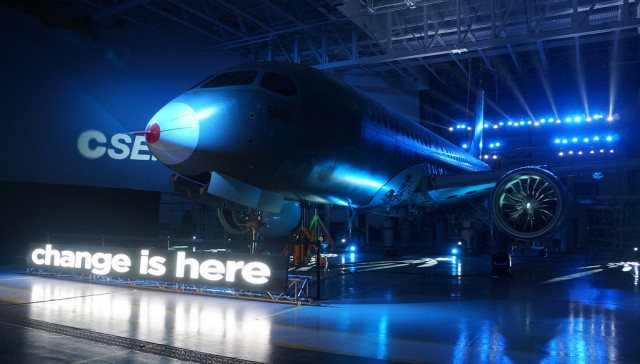 This story was written by Chris Sloan, who operates Airchive.com and is the creator/producer of the TV show Airport 24/7: Miami seen on the Travel Channel (see AirlineReporter.com’s review of the show). This is a two part story, with PART 2 posting tomorrow.

On Thursday March 7, 2013 Bombardier introduced to the world what it and its customers believe is a game changing line of aircraft, the Bombardier CSeries. This ultra fuel efficient, partial-composite / advanced aluminum construction, ducted turbofan line of aircraft, with advanced 787 Dreamliner like cabin and passenger experience features is the first ’œclean sheet design’ regional / short-to-medium haul category in a decade. Even more significantly, it attempts to create a new successful class of aircraft that could one day rival the duopoly of the Boeing 737 and Airbus A320 families.

Bombardier is not new to game changing aircraft. 20 years ago, Bombardier Aerospace first changed the game, and indeed created a new category of airliners – the first modern 50 seat ’œRegional Jet’, with the CRJ100/200 series. With the first entry into service of the Canadair Regional Jet CRJ100 and CRJ200 in 1992 and 1996 respectively, Bombardier’s RJs became a phenomenal success for both the manufacturer and their airline customers. Indeed by the time production concluded in 2006, a total of 938 examples of both types were in operation.

In the low fuel price environment and economic high gear era of the 1990s, the CRJs became much sought after by passengers and airlines as replacements for turbo-prop equipment such as the ATR series and ironically, Bombardier’s Dash 8, which would both later undergo a renaissance. In spite of their fairly high cost-per-passenger mile, The CRJs opened up new city pairs, new levels of comfort and smoothness (compared to the turboprops), bought jet service to smaller markets, and took regional airlines such as American eagle, SkyWest, and ASA to new heights. The CRJ’s success spawned their chief Brazilian competitor, Embraer to launch their own competitors in the 37-50 seat category in the form of the ERJ 135/145, launching service in late 1996.

The small regional jet party came to an end in the 2000s as 2 recessions, post 9/11 air traffic collapse, deteriorating airline balance sheets, and most of all sharply escalating fuel prices particularly in 2008 sealed its fate. To put things in perspective, a gallon of jet fuel cost bottomed out a $.30 USD in January, 1999; peaked at $3.89 per gallon in July, 2008; and stands at $3.09 in January 2013. Even adjusted for inflation, this is 7.5X increase. Airlines began to not only reduce flying the first generation 35-50 seat regional jets, but wrote their values down to zero in many cases. They are being grounded en mass. Their former passenger fans have abandoned them, especially in the face of newer larger RJs and the fact that airlines used their RJs on some very long stages as they replaced mainline operations.

The Delta Connection brand through its subsidiaries and partners such as ASA, the former ComAir, and SkyWest, is one of the world’s largest CRJ operators. The CRJ200s are being retired quickly and have now been limited to routes of less then 2 hours in duration or 700 miles. This CRJ-200 is seen at the airline’s home base and hub at Atlanta. Image from Chris Sloan / Airchive.com.

As proof of this trend, according to ’œThe Wall Street Journal’ Delta has limited the 50-seaters to trips of a maximum of 2 hours or 700 miles. The few airlines that created branded services based on these expensive to operate regional airliners such as ACA’s Independence Air and ExpressJet’s self-branded service learned the hard way that these small RJs couldn’t compete on a cost-per-passenger basis and they folded their wings. Ironically, the aircraft the smaller RJs replaced such as the Dash 8, Q400, ATR-42, and ATR-72 in turn replaced the RJs.

One study calculated that the use of a 50-seat Regional Jet would break even at 45 (out of 50) passenger seats compared to the Q400’s 35’“36 seats (around 55% breakeven load factor). Most short-haul routes are less than 350 miles, so the time spent on taxiing, takeoff and landing overrides an RJ’s speed advantage. As the Bombardier Q400’s 414 mph cruise speed approaches jet speeds, short-haul airlines can usually replace a regional jet with a Q400 without changing their gate-to-gate schedules. Such was the case as even long-time successful Alaska Air subsidiary Horizon Air was forced to convert its all RJ fleet to an all Q400 fleet. Alternately, some airlines such as Delta upgraded their smaller CRJs to Boeing 717s purchased from Southwest, following the AirTran merger.

DOUBLE BONUS: Flying a Frontier Airlines Bombardier Q400 into Aspen and a Q400 with Porter Airways

Back to happier times when they were flush with cash, healthy backlogs, ambition, demands from airlines for additional capacity, and perhaps even some clairvoyance as noted above, Bombardier and Embraer set their sights on larger designs. This foresight turned out to be correct as the market in the larger category of RJs continues to be healthy even as the smaller RJs precipitously decline. In the last 10 years, passenger traffic on RJs (classified as planes from 30-90 seats) has more than tripled according to the Department of Transportation. RJs are logging longer flights now with some stages close to four hours and the flight distance growing by 50%. According to a recent article in ’œThe Wall Street Journal’, ’œRegional airlines fly 64% of the takeoffs and landings at Chicago’s O’Hare International, 74% at Seattle-Tacoma and 52% at New York’s LaGuardia Airport. Still, the 50-seat jet, which is less fuel-efficient per-seat than bigger regional jets, remains the backbone of regional airline service and 43% of the entire regional airline fleet.’

A CRJ1000NG on the factory floor in Montreal waiting to be delivered to CRJ1000 Garuda Indonesia. Photo by Chris Sloan / Airchive.com.

Bombardier was first to explore the possibility of larger RJs, first considered purchasing the struggling Dutch manufacturer Fokker to gain access to the F-100 line. Then they looked at the BRJX, ’œBombardier Regional Jet eXpansion’ with a similar configuration to the CSeries with 2-3 seating and under-wing engines. Instead Bombardier opted for the conservative route: choosing to stretch, re-engine, and re-wing the CRJ200 into the CRJ700/900 line with maximum seating of 78 and 90 seats respectively. The CRJ700 entered service in 2001 with Brit Air while the CRJ900 entered service in 2003 with Mesa Air. In December 2010 Bombardier began delivering the 90-104 passengers stretched CRJ1000 to launch customers Nostrum and Brit Air.

With over 730 deliveries and orders as of December, 2012 the CRJ 700/900/1000 series is an unqualified success. Not one to be complacent and in response to the E-Jets, Bombardier launched an enhanced CRJ700/900 NextGen series in 2008. The stretch CRJs are capable of being fitted with First Class cabins and Wi-Fi and are a substantial improvement over the initial CRJ100/200s in efficiency and comfort, though the narrow 2-2 cross section remains unchanged. Indeed, this line has been the cash cow for Bombardier Aerospace, taking over for the CRJ200.

BONUS: Flying a United CRJ-700 from Seattle to LAX

Embraer chose to answer with an entirely new design: the E-Jets whose success would eventually spur the CSeries. The E-170 was built to compete with the CRJ700 and the E-175 was built to compete with the CRJ-900. They featured under-wing engines and wider fuselage then their competition. The E-170/175 first entered service respectively in 2004 with LOT and 2005 with Air Canada. With this success under its belt, Embraer leaped frog Bombardier with the stretched, new-winged, and larger engine E-190 and E-195, in essence creating a new class of aircraft. The E-190 and E-195 featured seating up to 114 and 122 passengers respectively. Jet Blue took delivery of its first E-190 in 2004 while FlyBe began the E-195 operations shortly after.

The E-190, in particular, has emerged as the most popular of the E-Jets. The upsized E-Jets upstaged their secondary downsized competitors the Airbus A318, Boeing 737-600, and Boeing 717 (MD-95). These aircraft weren’t very successful and have basically been discontinued. Combined, the E-Jets as of December 2012 have 908 deliveries and 1093 firm orders with the bulk of the market concentrated in the larger E-190/195s. Clearly Embraer had the edge and near monopoly, particularly in the larger class RJs. With momentum shifting to its formidable competitor to the South, Bombardier needed to not only respond, but had to respond big with a game changing design.

Bombardier initially announced the CSeries (then known as the C110 and C130) in March 2005. The new CSeries would be the first RJ to access the next vanguard of aviation technology such as a high percentage of composites and new lightweight lithium aluminum for its wings and fuselage, and very fuel-efficient high-bypass geared turbofan engines under the wing. Looking closer, the majority of the fuselage would be constructed out of a new lighter weight lithium aluminum. The empennage, tail-cone, wing, and horizontal/vertical stabilizers would be constructed of composites.

Bombardier didn’t feel the additional lighter weight full composite fuselage would justify the additional production challenges and costs, especially on a shorter-range jet. In retrospect, this seems like a smart decision. The smaller C110, with up to 125 seats, would compete directly with the E-195, and secondarily with the Boeing 737-600, Airbus A318, and Boeing 717. The C110’s 125 maximum passenger capacity would be comparable to the E-195’s 122 max passenger capacity.

The mock up for the Cseries had different seat pitch for each row and you can see that some have fake entertainment screens as well. Photo by David Parker Brown / AirlineReporter.com.

The CSeries would have a wider 5 abreast cabin width of 10.75 feet compared to 9 feet wide and 4 abreast seating in economy in the E-195, allowing the CSeries to have wider seats and/or aisles. In terms of passenger appeal 80% of seats would be on an aisle or window, but the middle seats would have the potential to be larger and/or have larger arm rests. It would feature larger windows then any other airliner except the 787 Dreamliner measuring 11 X 16 inches. The C110 maximum seating capacity would be slightly less then the A318’s 132 passengers and 737-600s 130 passengers. However, the C110 would be 12 and 13 feet longer respectively then the A318 and 737-600 respectively. The CSeries’ 5 abreast cabin, seating in economy and 10.75 cabin width, would be quite a bit narrower then the 737’s 6 abreast 11 feet, 7 inches cabin and the A318/319/320’s 6 abreast 12 feet, 2 inches cabin.

However, there hasn’t been significant new interest in aircraft of this size: the 737-700 MAX has no orders at press-time and the Airbus A319 NEO has just a handful due to improved economics with the larger aircraft moving forward. Thus, the CS300 isn’t yet a direct competitor to the A320 / 737 family just yet.

With the larger CSeries meeting and in many cases exceeding its competition, this clearly signaled Bombardier’s intentions to take on the big boys in Seattle and Toulouse, not to mention it’s arch-nemesis in Brazil. It is clearly viewed as a threat however. Airbus is rumored to be selling A320s at prices similar to the CSeries 300 to prevent the nascent Canadian aircraft from encroaching into its market.

Chris’ story on the Bombardier CSeries will conclude on AirlineReporter.com tomorrow.

http://www.theairchive.net
We Will Miss You Brian: Southwest Boeing 737-200 and AMC Pacers
Bombardier”s CSeries Rocks (and Rolls Out) – PART 2
2 Comments

I can’t believe airlines still fly those horribly uncomfortable CRJ-200’s,
despite their much higher operating cost!!
I will never again fly an airline that uses these aircraft, I am 6’3″ and not willing to subject myself to this much suffering.
Airlines can’t get rid of them fast enough for me.

wow, Garuda Indonesia will have CRJ1000 . a good news for indonesian domestic passenger . i will be excited soon