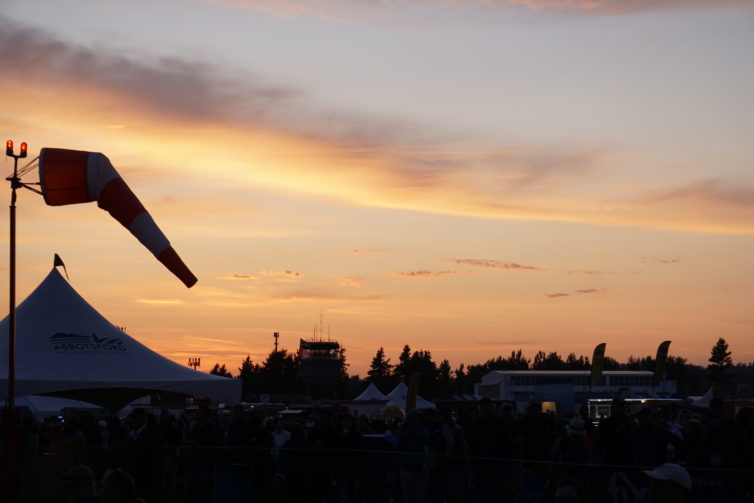 Itâ€™s been Canadaâ€™s National Airshow. Itâ€™s hosted such legendary aircraft as the An-124 and SR-71 Blackbird. For years, itâ€™s been the Canadian West Coastâ€™s airshow. Itâ€™s the Abbotsford International Airshow, now in its 47th year, and it’s as impressive as ever. Iâ€™d been to Abbotsford many times before, and this year I tried something a bit different â€“ I went to the Twilight Show. For those who donâ€™t know, this is a Friday night show held before the full two-day airshow. This idea wasnâ€™t my first instinct; after all, less airshow = less fun, right? But the Twilight show still managed to impress and is an excellent alternative to a full day at the airshow. 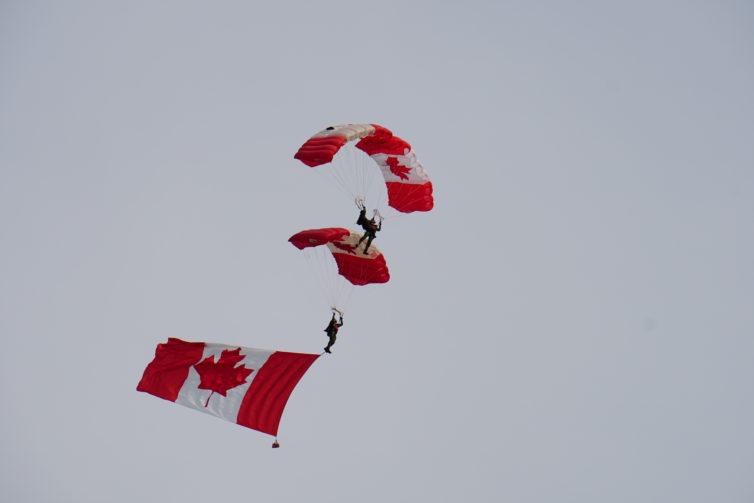 The Canadian Forces Skyhawks during the opening ceremonies of the 2019 Abbotsford Airshow – Photo: Matthew Chasmar

Despite traffic, I made it to my seat just in time to catch the opening act, which wasnâ€™t so concerned with flying as it was with falling. Â The Canadian Forces Skyhawks opened the show (as they do every year) by parachuting in to the national anthem. 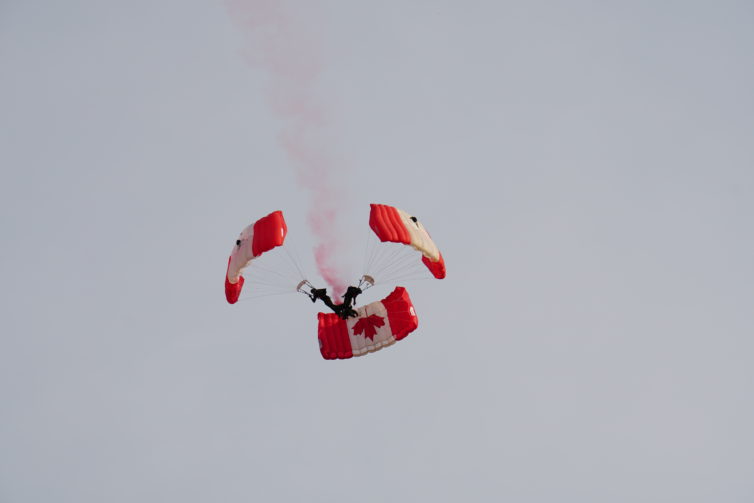 Following that, the Snowbirds (our aerobatic display squadron) got the display off to a great start with their usual flying display. According to the airshowâ€™s website, the Snowbirds performed their first show at Abbotsford in 1971 and have been at every show since. This year was no different. The Snowbirds are always a crowd-pleaser, and this was a rare chance to see them start, rather than end, the show. 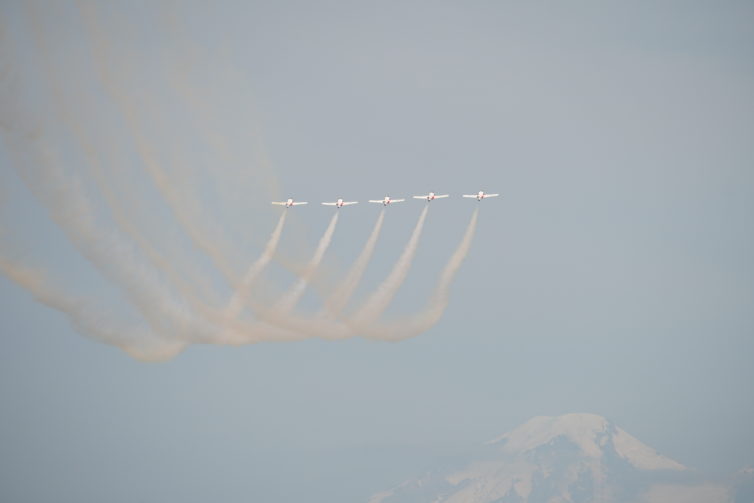 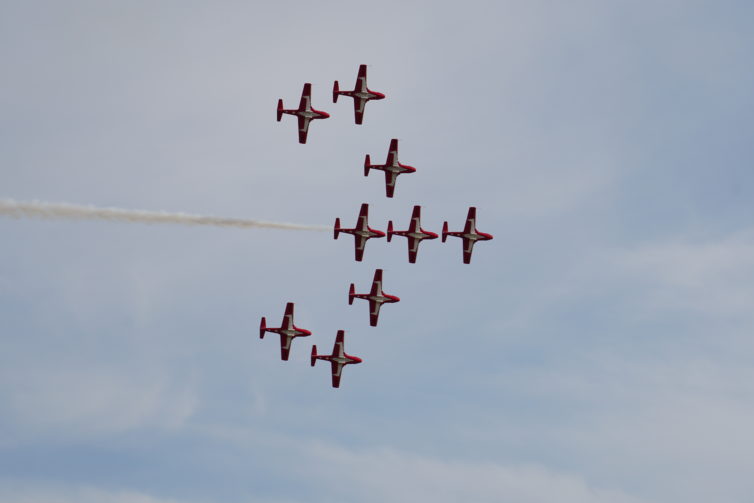 The Snowbirds show their red-and-white underbellies to the crowd – Photo: Matthew Chasmar 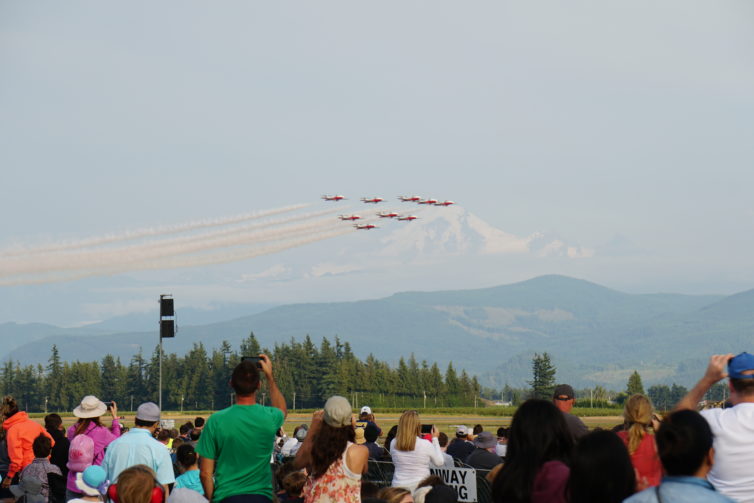 The Snowbirds make a low pass in front of the crowd, again with Mt. Baker in the background – Photo: Matthew Chasmar

The Snowbirds were followed up by a heritage flight consisting of two CF-18 Hornets and an A-1 Skyraider, and then a more unusual flying display by one of the RCAFâ€™s C-17 Globemasters. I didnâ€™t pay too close attention to these as Iâ€™d gone to check out the other half of the airshow: the static display. 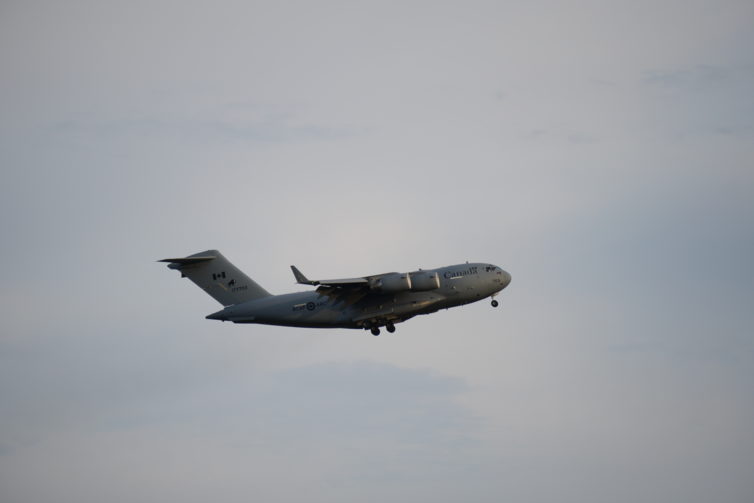 A C-17 Globemaster III of the Royal Canadian Air Force performs a pass during its flying display – Photo: Matthew Chasmar 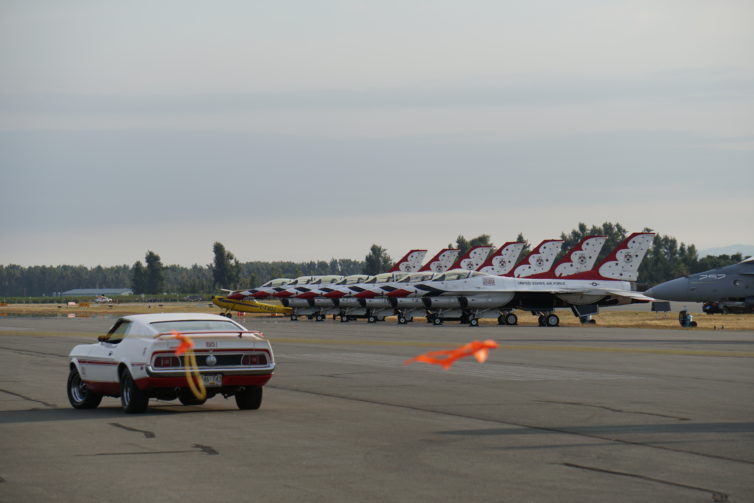 F-16s of the U.S. Air Force Thunderbirds on the flightline. Sadly they did not perform until the next day. – Photo: Matthew Chasmar 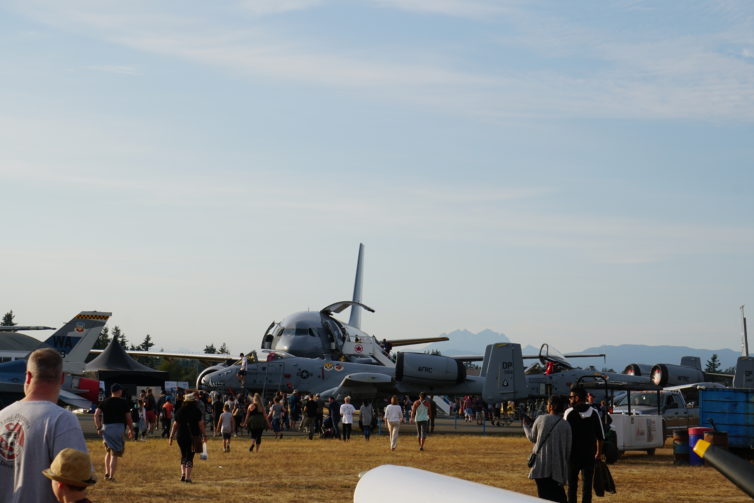 One of the downsides of the twilight show is that most aircraft arenâ€™t open for visitors – but that didn’t dampen the experience. Most of the display was made up of the usual selection of Canadian and American military aircraft. For example, the RCAFâ€™s CC-150 Polaris (a modified A310), CP-140 Aurora (a P-3 Orion), and CH-149 Cormorant (an AugustaWestland AW101), amongst others, are staples of the Abbotsford static displays. 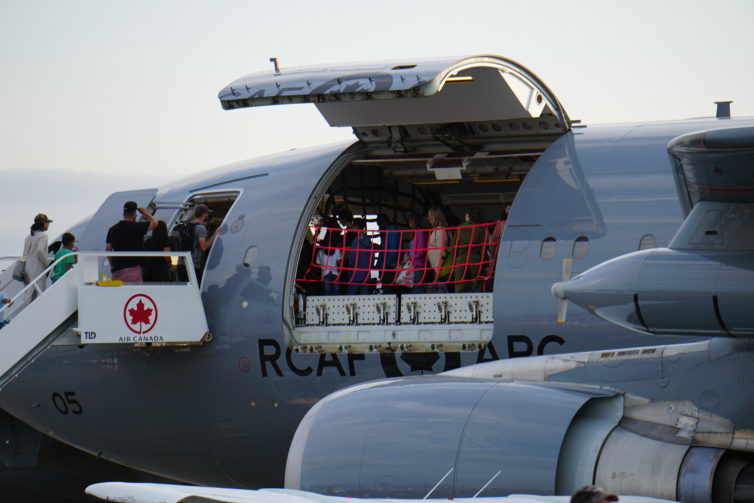 Visitors line up to tour a CC-150 Polaris in the static display – Photo: Matthew Chasmar 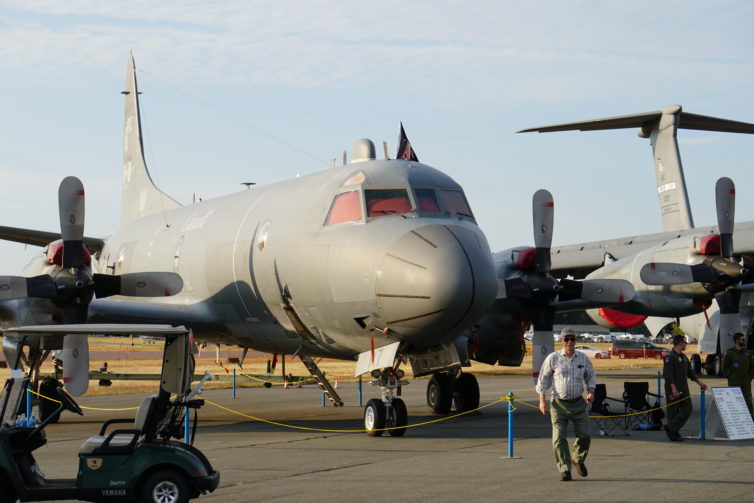 A CP-140 Aurora in the static display – Photo: Matthew Chasmar

Yet as always, there were some less regular visitors. For starters, the USAF sent a KC-10 Extender to this show, as well as F-16s from an aggressor squadron with their strange Soviet-style markings. 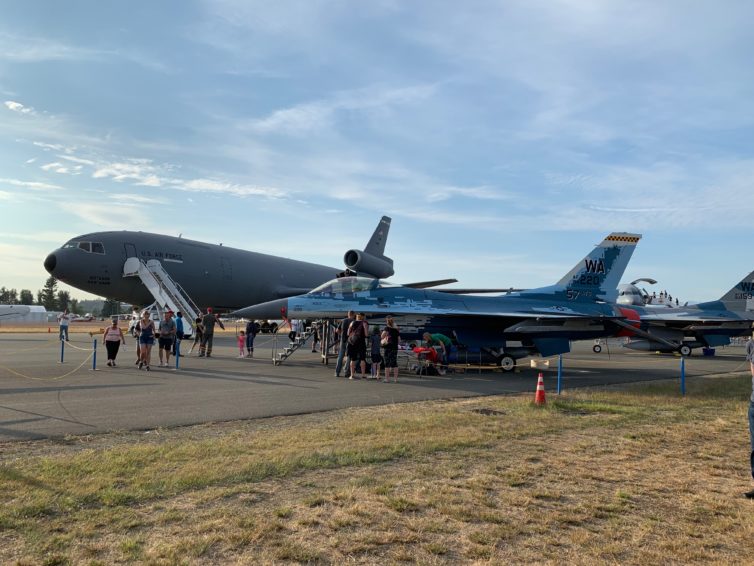 The KC-10 Extender and Agressor F-16s in the static display – Photo: Matthew Chasmar

Elsewhere were two impressive restoration projects, both from close to home. The first was a fully-airworthy PBY Catalina from The Catalina Preservation Society. I had no idea about this project, and seeing such a unique aircraft was a welcome surprise. Likewise, the B.C. Aviation Museum had the nose section of a Lancaster that they are hoping to restore. I donâ€™t think flying is in the future for this aircraft, but Iâ€™m sure the restoration will be a formidable task and I wish them all the best. 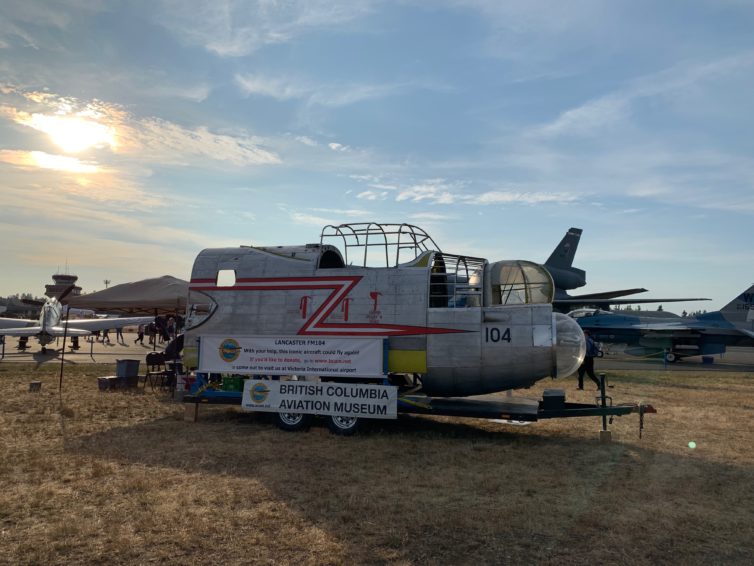 Â The biggest change this year was the European presence. With the competition to select the RCAFâ€™s next fighter underway, Eurofighter/Airbus have been finding a reason to show their faces at Abbotsford. Last year they handed out free hats, and this year they brought a full-scale mockup of a Eurofighter Typhoon with a host of weapons. Looked almost like the real thing. (Side note: since the airshow Eurofighter has withdrawn from the competition in question). More impressive was the first-ever visit to Abbotsford of an Airbus A400M of the German Air Force. With its modern design, curved propellers, and dwarfing even a C-130 Hercules, it made quite the impression on the flightline. 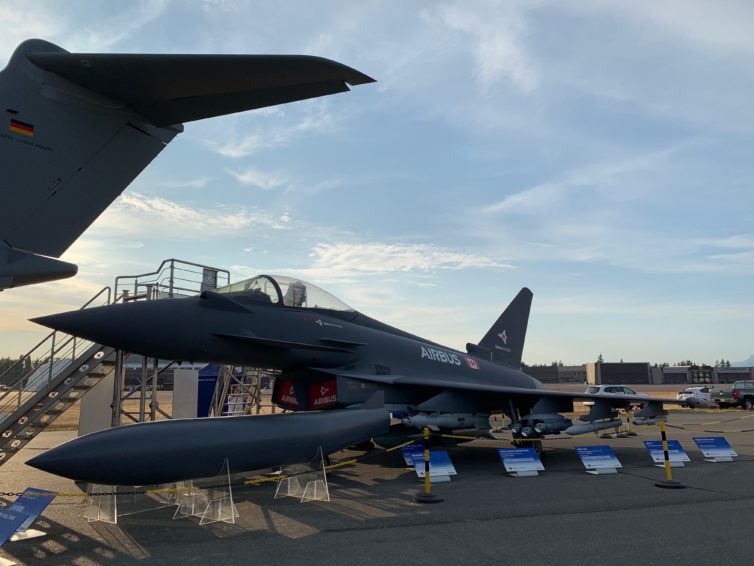 Airbus’ Typhoon mockup next to the A400M in the static display – Photo: Matthew Chasmar 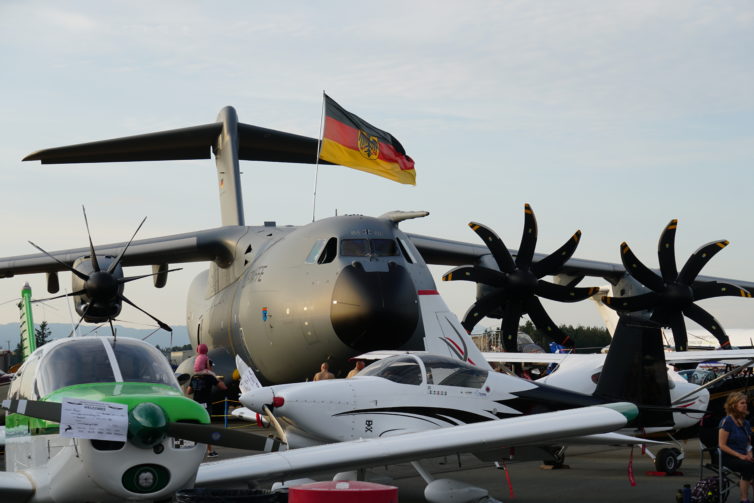 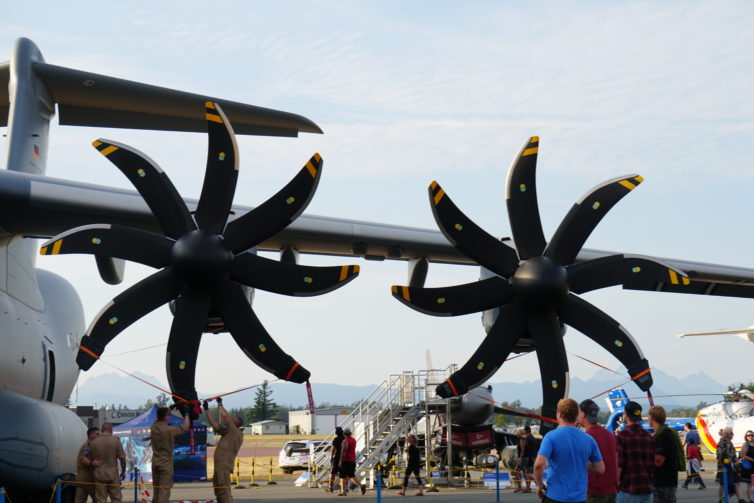 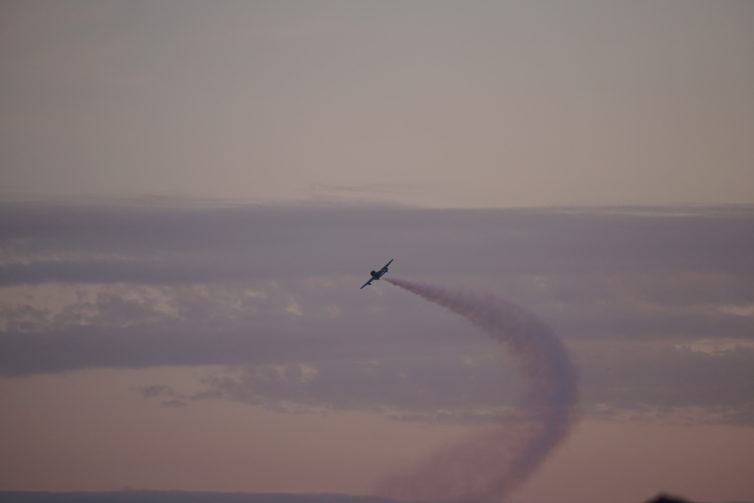 The De Havilland Vampire banks away from the crowd as the sun sets – Photo: Matthew Chasmar

As the sun began to set, I returned to the flying display in time to hear the low whistling sound of a De Havilland Vampire. This was the RCAFâ€™s first-ever jet fighter, and I donâ€™t think there are many still in airworthy condition. The Vampire may lack the capability of todayâ€™s jets, but had no trouble wowing the crowd with a series of fast passes â€“ including at a mind-bogglingly low altitude. At one point, the pilot even raced a Lamborghini down the runway! As you may expect, the Vampire won. 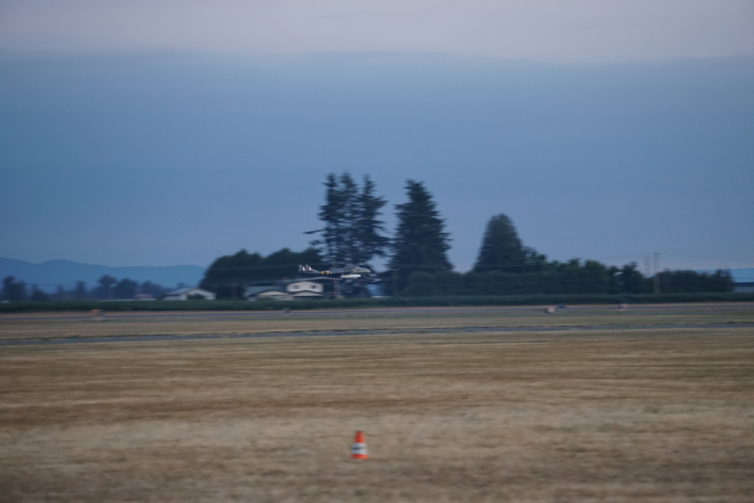 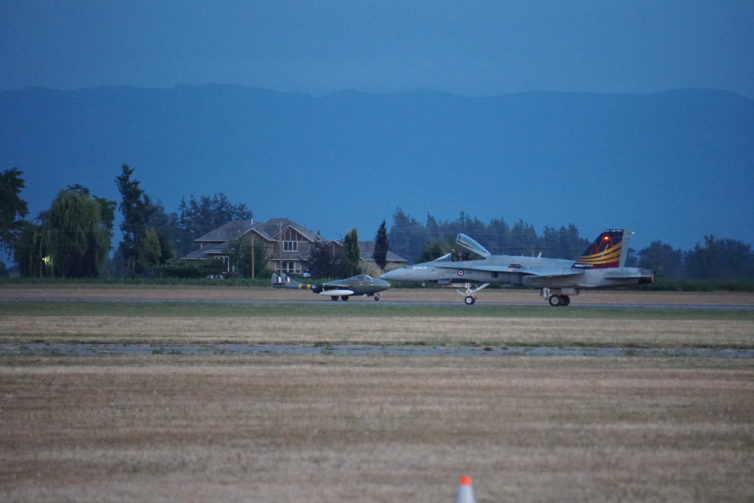 Then, it was time for the RCAFâ€™s first jet fighter to give way to the RCAFâ€™s newest. My personal highlight: the CF-18 demo. Each year, the RCAF paints a CF-18 in a special livery and sends it to airshows all around the country to put on an aerobatic display. And it was during this display that the advantage of the night show really shone through. Seeing the glow of the afterburners in the dusk light, and the shadows cast by the setting sun, really added a dimension to the display that you canâ€™t get during a regular daytime show. 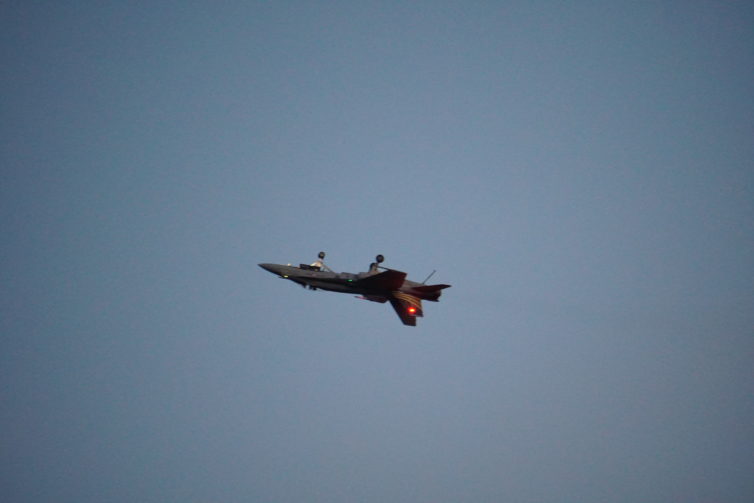 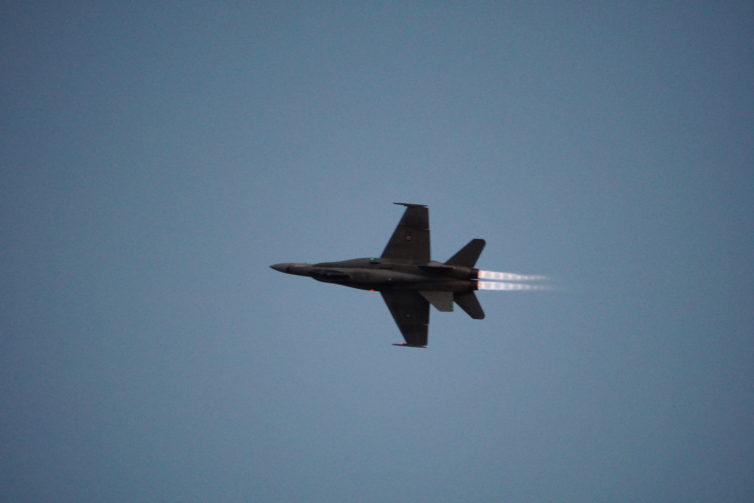 The CF-18 makes another pass for the crowd – Photo: Matthew Chasmar 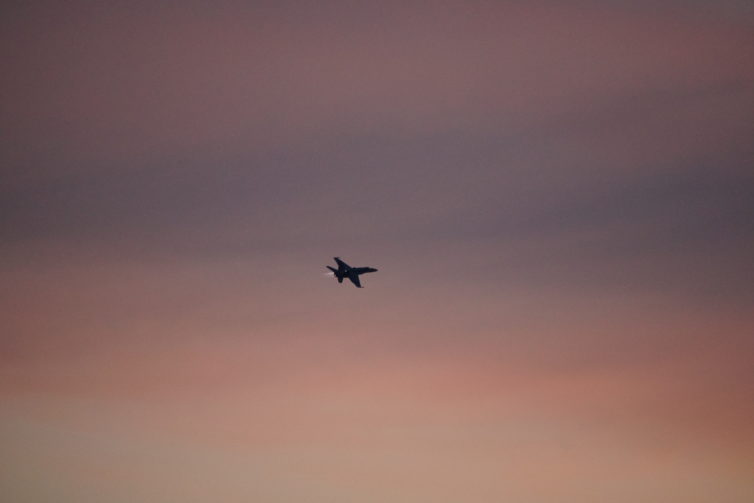 The CF-18 makes a turn against the backdrop of a sunset sky – Photo: Matthew Chasmar

Once the sun went down, the display took on an almost surreal feel to it, becoming more a show of lights than a show of aircraft. I left soon after that, watching the disembodied wingtip fireworks of a glider twist and turn through the night sky. The Abbotsford twilight airshow had met my expectations for sure. If anyone ever has the opportunity to go to this or any other airshowâ€™s night show, I absolutely recommend it. It may be shorter â€“ but trust me, you wonâ€™t be disappointed. 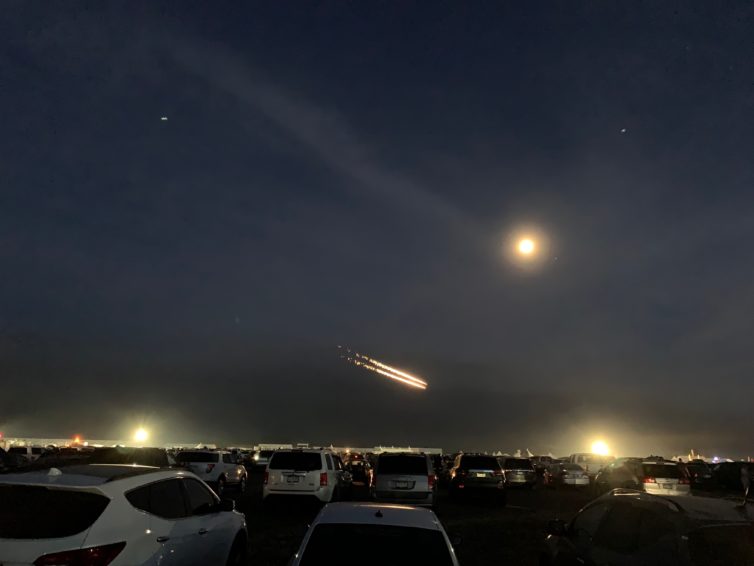 Wonderful summation of an absolutely surreal evening that I happened attend as well this year with my folks. The Snowbirds approach lights coming in formation head-on silhouetted off Mt. Baker in the evening dusk light were stirringly reminiscent of my youth. Having grown up in the Abbotsford area as a kid and a longtime Abbotsford Airshow fan, I still fondly remember the SR71 Blackbird’s visit when the announcer told us they had just called down to Bakersfield (Edwards) confirming that the Blackbird was on its way up upon which the pilots said, “put the coffee on”, we’ll be there in 20 minutes. Indeed they were as I still remember the ear-splitting “slow pass” of this beast over the tarmac and then the pilots popping the canopy waving to the crowd in their astronaut suits. Footnote for others considering attending, bring lawnchairs, blankets and enjoy the fantastic food trucks!

Great Piece and Photos Matthew! I went on the Saturday last year and loved it. Disappointed about the Thunderbirds, but the CF-18 demonstration and Snowbirds display helped soften the blow. We’ll have to catch up sometime in Vancouver!