Weâ€™re all AvGeeks here, but what really gets my heart pumping is fast jets at air shows and demonstrations.Â  As someone based in Chicago, Iâ€™m spoiled with having the wonderful Chicago Air and Water Show in my backyard, as well as EAA AirVenture in nearby Oshkosh, and am a short flight away from many other fabulous official demonstrations like Fleet Week in SFO.

But there was one show I had somehow not ever heard of, until I read about right here on AirlineReporter: Fliegerschiessen Axalp.Â  An air show that combines liberal use of flares, cannon fire, vapor, and set with a backdrop in the Swiss Alps?Â  SIGN ME UP! 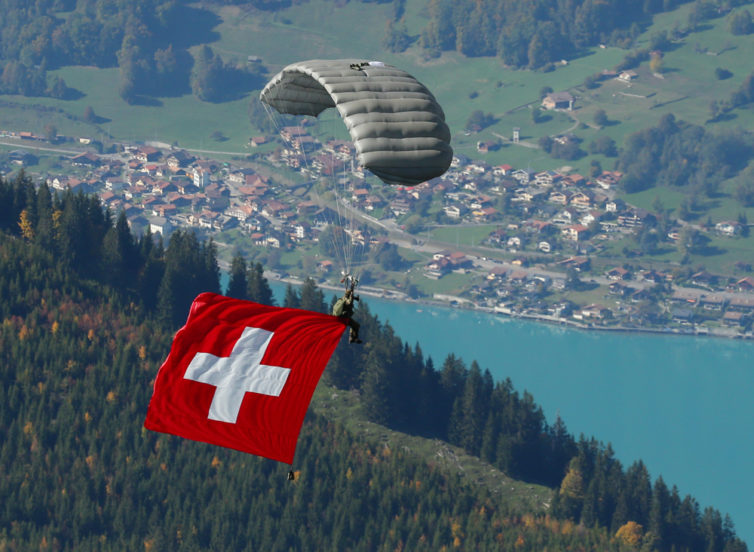 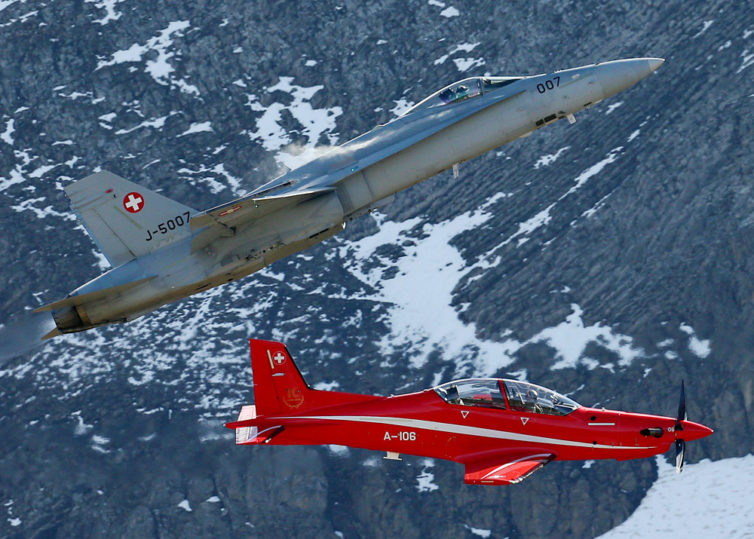 A Swiss F/A-18 and a Pilatus flying in formation.

Around August, I started making my preparations to visit.Â  I got a flight to Zurich booked, rented a car, and found an Airbnb in Brienz, a quintessential lakeside Swiss town at the foot of the Alps. 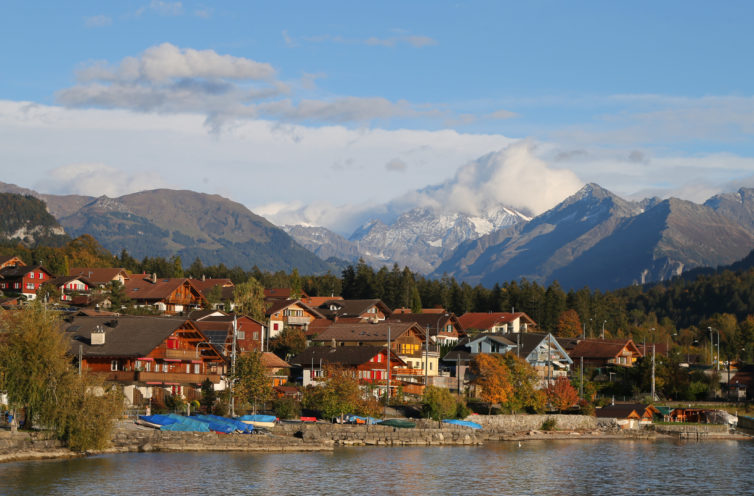 Brienz is as picturesque a town as you can imagine. 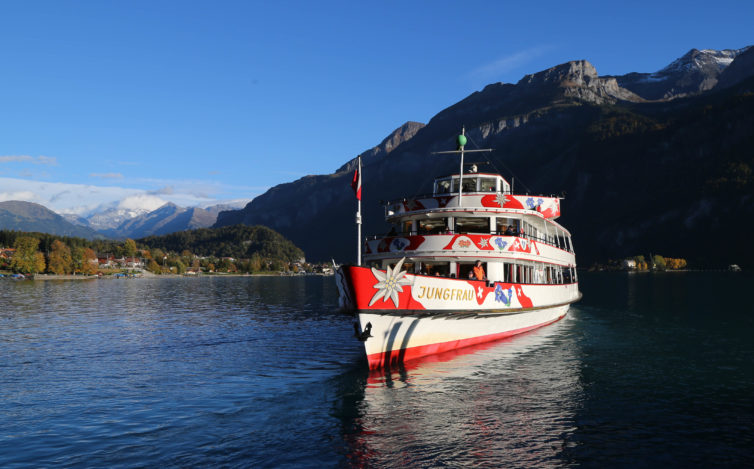 Many Swiss lakes have tour boats, and some of their liveries rival those of our favorite aircraft.

I knew that going into this trip that because weather at this time of year in the Swiss Alps can be a bit unpredictable, that planning a trip where the primary purpose of seeing the Fliegerscehiessen would be a lot like fishing.Â  You have no idea what you are going to get on a given day, and need to be prepared for the possibility that you may get completely shut out.Â  Indeed prior to 2017, this event had been canceled several years in a row. Â You really do have to go into an adventure like this with the mindset that you could get skunked.Â  However, at the end of the day, youâ€™re in the Swiss Alps with so much to do in nearby Brienz, Interlaken, Lucerne, and others.

Fortunately, the weather gods were in my favor for the 2018 edition.Â  I made the 90 minute drive from Zurich to Brienz in beautiful 70 degree fall weather on Monday afternoon before the first practice day, so that I could figure out where I needed to go before it got dark.Â  As I passed Meiringen and approached Brienz, I could hear the roar of Swiss fighter jets above me.Â  That was the confirmation I needed to have to know it was going to be a great week.

I was a combination of being both jet lagged and overly excited, so I ended up waking up at 3 a.m.Â  Being unable to fall back asleep, I decided to just head to the show early which as you will read below, ended up being very fortunate. I arrived at the Park and Ride in the dark at about 5:45 a.m. but was not the first one there.Â  There were many other cars already parked and unloading their gear for the trek up to Axalp.

And hereâ€™s the part that people donâ€™t really warn you enough about: the hike.Â  Oh that hike!Â  Iâ€™m in pretty good shape, but it still took me a strenuous hour and 15 minutes to get from the chairlift to the uppermost viewing area, KP Ebenfluh.Â  The photos of the climb donâ€™t really do justice to describing just how steep some portions get [editor: I dunno, those photos look pretty intense]. 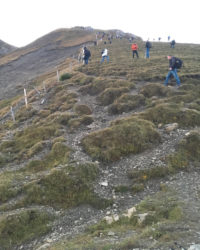 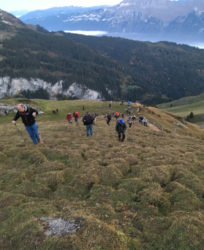 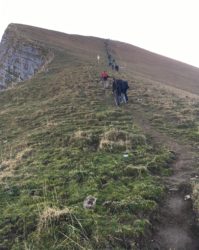 But when you stop and look in the other direction, youâ€™re rewarded with beautiful views of the town below. 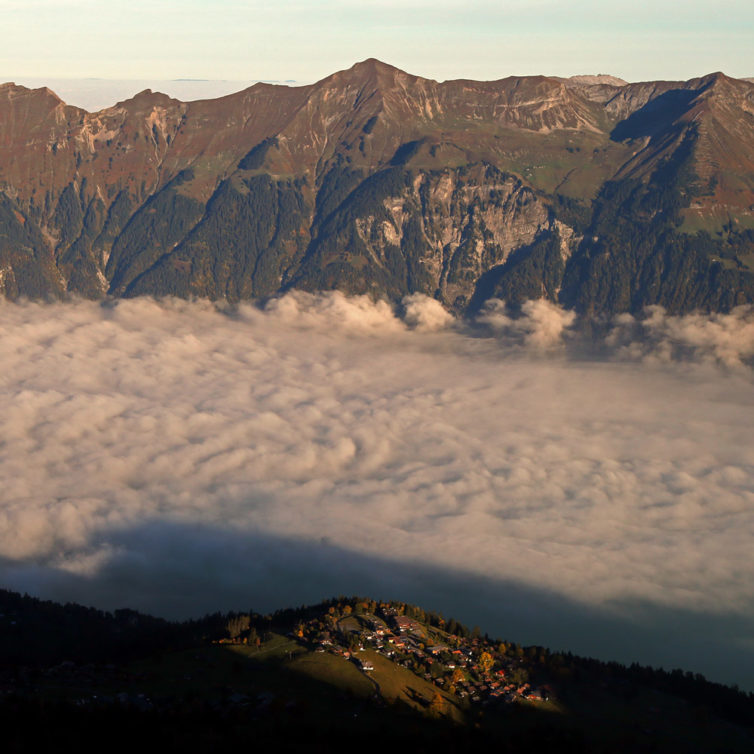 A layer of morning fog covers the lake below the show site.

After the bus transfer, chairlift ride, and hike, I got to my spot in KP Ebenfluh at about 8:30 a.m. and geared up for a long morning of waiting.Â  I was pleasantly surprised that I didnâ€™t have too wait long â€” at about 9 a.m., four Swiss F/A-18 Hornets made their very loud arrival by dropping flares and firing their cannons at the targets for morning practice. 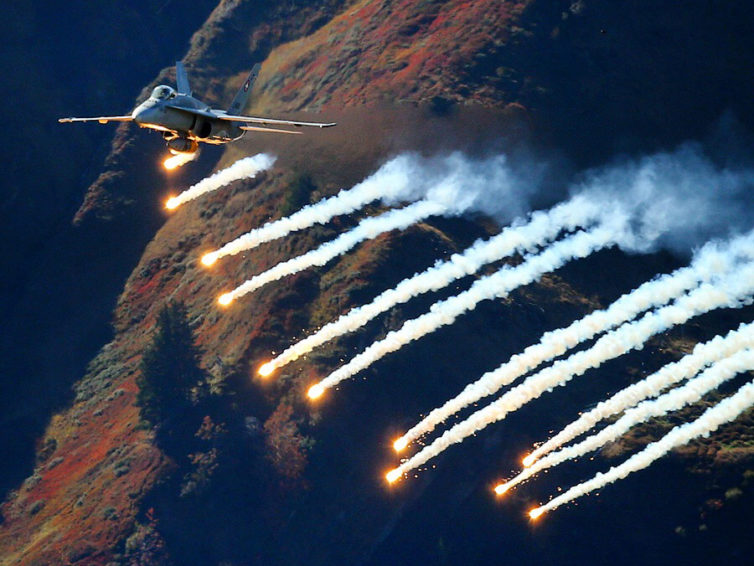 An F/A-18 releases flares as it heads up the valley â€” it’s a sight to behold. 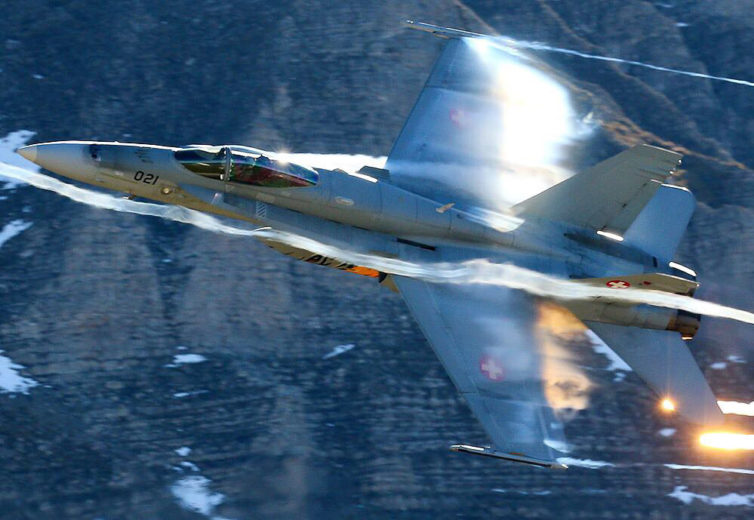 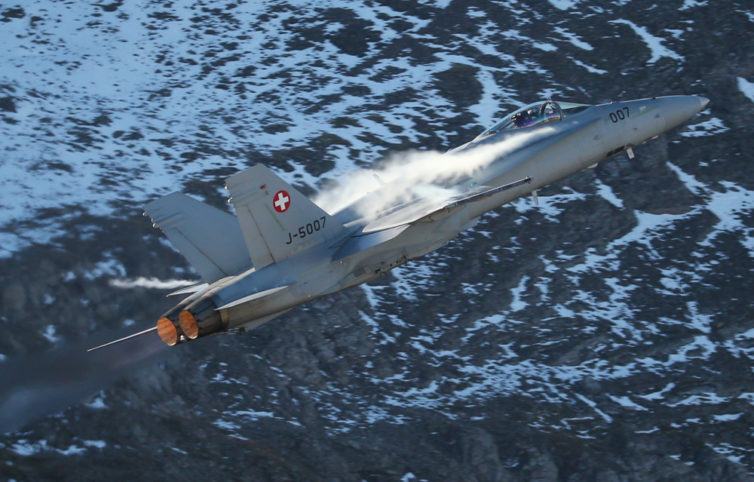 Favorable morning temperatures are often conducive to vapor formation in the Alpine autumn. 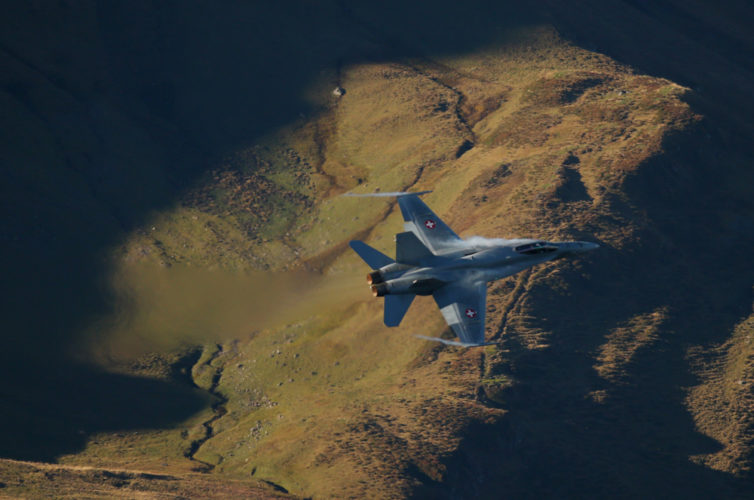 Dropping into the valley.

This was followed by a Super Puma performing their full demonstration. 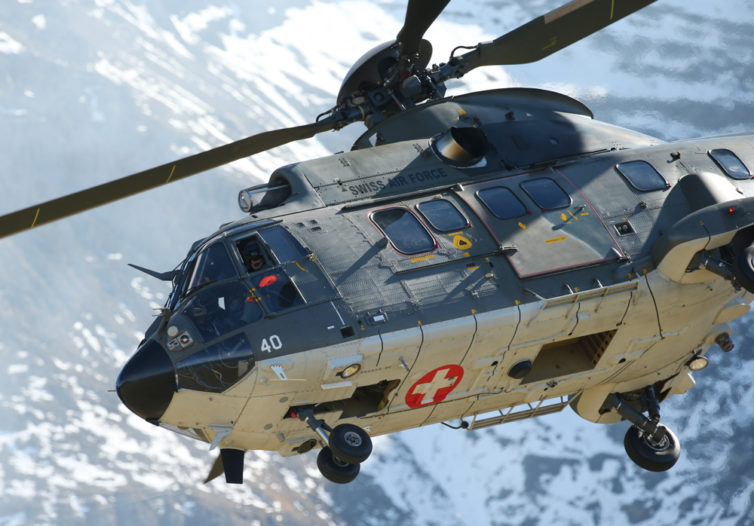 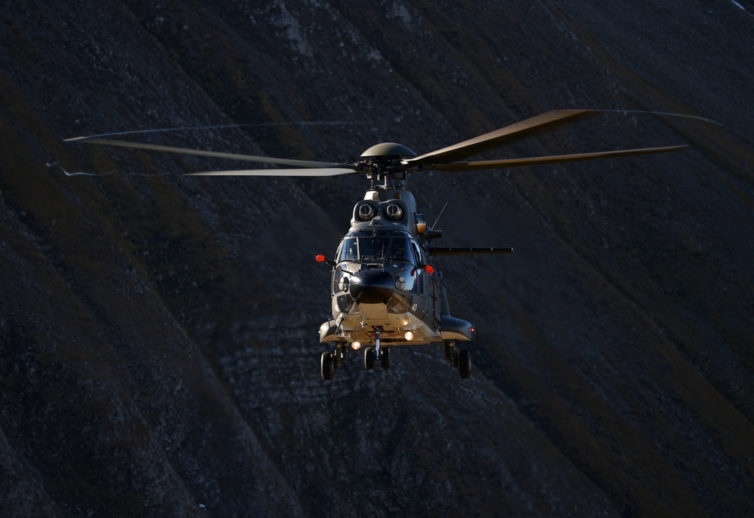 Both pilots wave to the crowd while wearing orange gloves.

All in all, morning practice lasted for an hour and quite frankly, if that was all that I saw that day I would have been one happy camper.Â  But no, that wasnâ€™t all, not by a long shot.Â  At noon, the hornets returned but brought their Tiger friends along for a few additional practice runs. 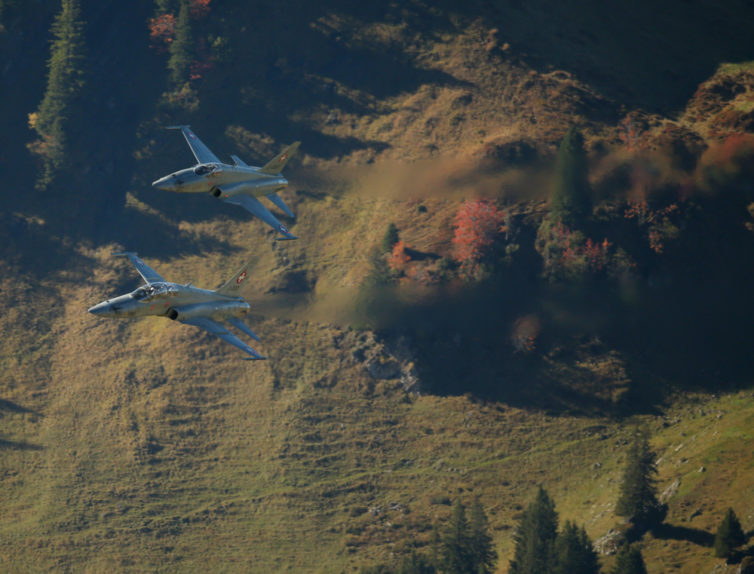 It’s super fun to see Super Hornets flying beneath your vantage point. It is also cool to watch a few F5s fly by :).Â 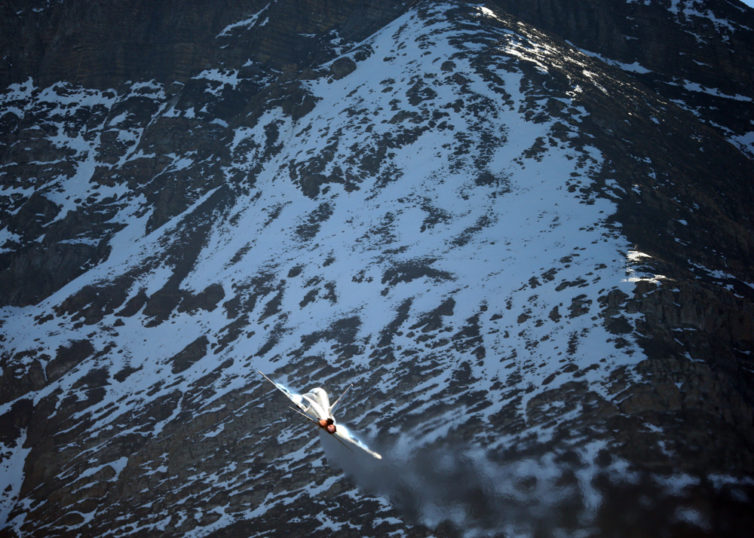 Afterburner on at the end of the valley. 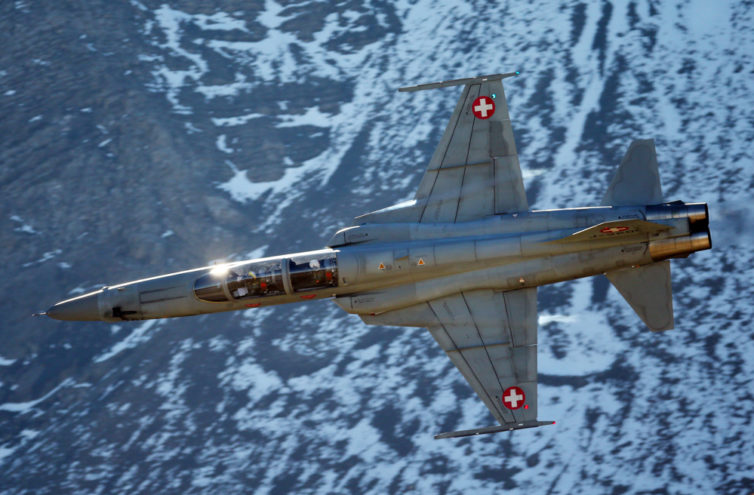 Finally, after all that, the regular show at 2 p.m. began.Â  In addition to the previously seen Hornet and Tiger teams, any teams that didnâ€™t practice earlier like the parascouts and Patrouille Suisse finally made their appearances. 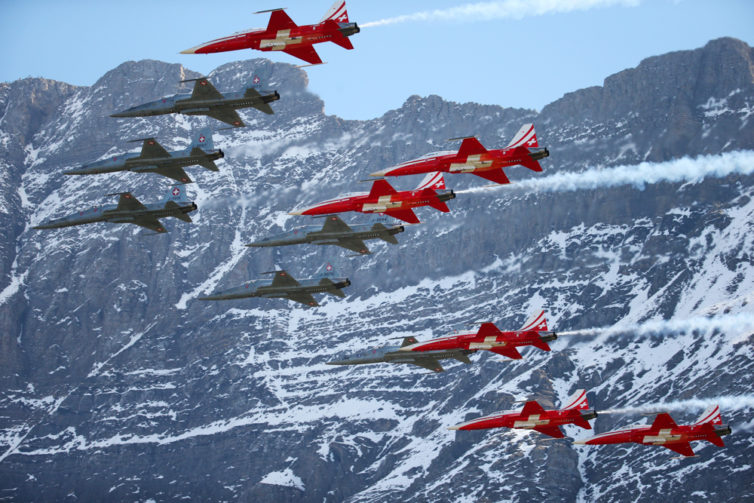 Formation flying with the Patroiulle Suisse. 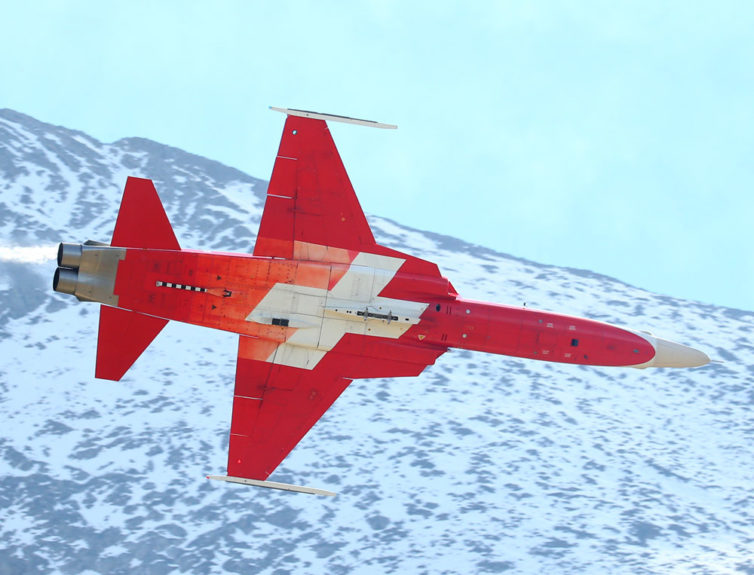 One of the finest liveries in military aviation, at least in this editor’s humble opinion.

When the day was finally done, I essentially ended up watching and photographing three air shows between 9 a.m. and 3:30 p.m.Â  Needless to say, because of the constant action, the flawless weather, and the great ambiance around me; this exceeded all my expectations.Â  A few of my friends who are also AvGeeks â€” but just not as hardcore as me being willing to get the risk of getting skunked for the distance traveled â€” said that after seeing my photos they are not going to make any excuses and will definitely go in 2019.Â  If youâ€™re like them and thinking the same thing, you can already start planning:Â  The Swiss have announced the dates for next yearâ€™s show for Wednesday, October 9 and Thursday, October 10, 2019. 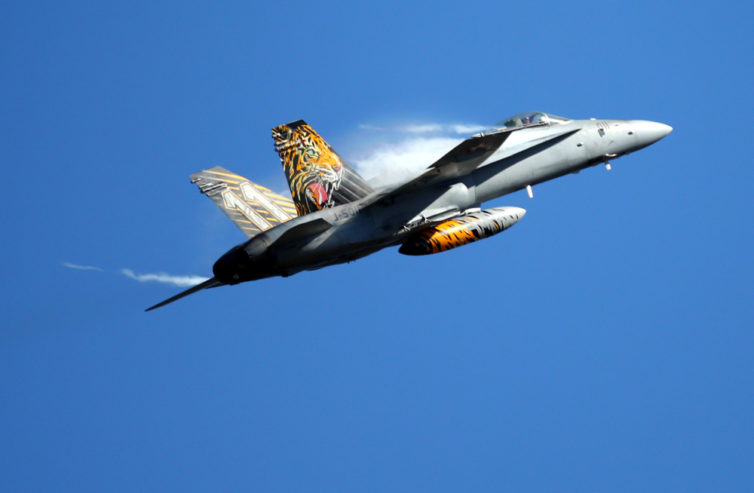 An F/A-18 sporting a special livery. 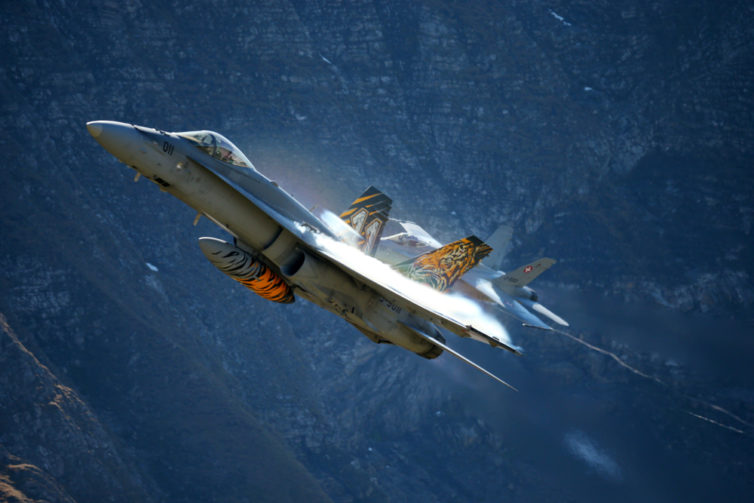 Even the drop tank got special paint on this one. 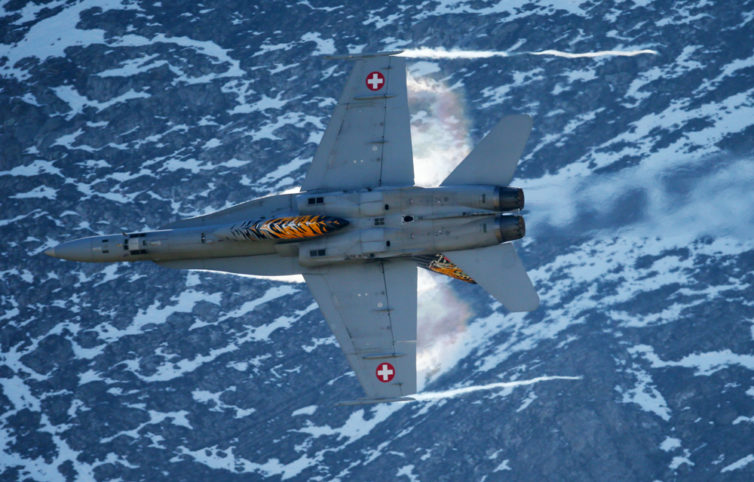 https://www.airlinereporter.com
We Finish Our Chat With Finnair’s Airbus A350 Program Manager – And Give Away An A350 Model!
PlaneTags â€” A Bit of Aviation History in Your Pocket
6 Comments

Incredible photos, Jerry. And thank you for the protips at the end, about 1/4 way through I was convinced that this will be on my AvGeekToDoList. Not sure if I can make 2019 but it will happen someday for sure.

Dear Jerry , stunning pics , a slight mistake under one of the pics it says “Itâ€™s super fun to see Super Hornets flying beneath your vantage point.” that image is of a F-5. Do upload more , thanks Mike

Good catch! I mean, it IS true that it is super fun watching hornets, that photo is of a few F-5s :). I have gone ahead and updated the caption.

Also there on Tuesday, being a practice day less people. According to one of the helpers outside our hotel they ran 9 buses going up on Tuesday, looking at over 25 on show days. Also all the activity at the air base is good to see, as is the unique restaurant on the base. Went three years ago when the show was cancelled for the two days, this year perfect weather.

One can look for more help on https://www.google.com.