Boeing’s newest offering, the 737 MAX 7, took to the skies on March 16, an uncharacteristically sunny, blue-sky day for a Boeing first flight most all of them in recent memory have taken place on truly miserable days. 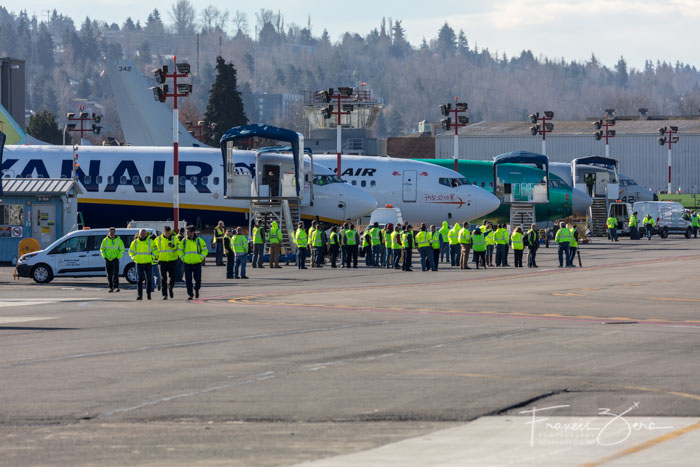 The flight took off from Boeing’s Renton facility, without a hitch, at 10:17 a.m., accompanied by one of Boeings T-33 chase planes, for a successful three-hour, five-minute flight, landing at 1:22 p.m. at Seattle’s Boeing Field. According to Boeing, the airplane was put through tests on its flight controls, as well as checks of its systems and handling qualities. 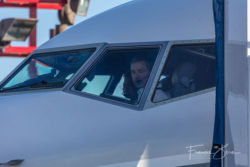 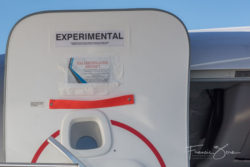 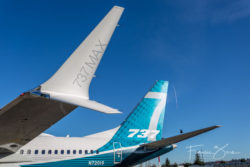 It was soon followed into the air at Renton Airport by a Japan Airlines 737-800, also on its first flight, which was a nice treat.

BONUS: The MAX 7 rolled out of the factory on Feb. 5

The Renton factory pumps out 47 of various derivatives of the 737 per month, on the way up to 52 per month at some point this year. The runway at Renton Municipal Airport is where every 737 built since 1970 first takes to the skies.

The fourth and final MAX variant, the larger MAX 10, is expected to enter service in 2020. 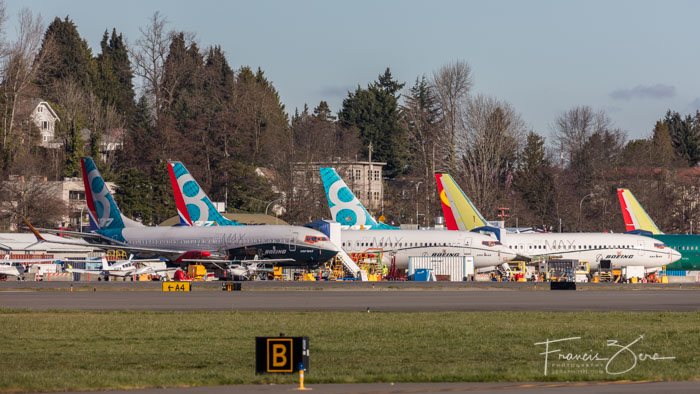 According to Boeing, the MAX program has garnered more than 4,300 orders from 93 customers, making it the fastest-selling airplane in the company’s history

Currently, the MAX 7 is the slowest-selling variant by a lot. Instead, many carriers are opting for the larger -8 and -9 models. All models are powered by CFM’s LEAP-1B engines and feature Boeing’s Advanced Technology split winglets. 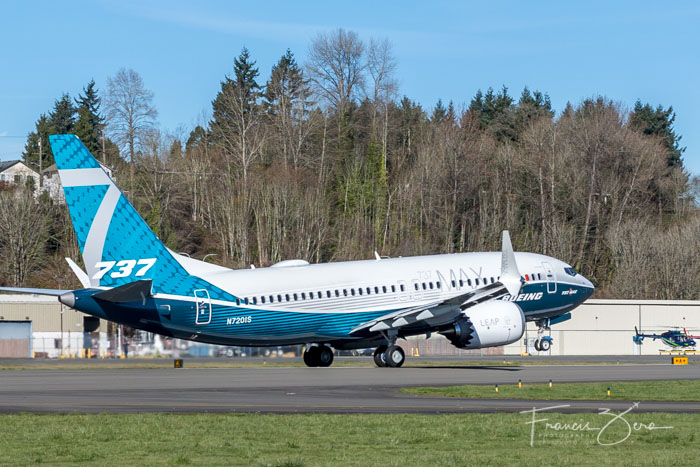 The MAX 7 rotates for takeoff

Boeing’s newest jet competes directly with the Airbus A319 in what analysts view as a limited market, although both manufacturers have invested in upgraded offerings in that niche. The MAX 7’s longer range and hot-and-high performance make it suitable for airports such as Denver International (DEN), Johannesburg’s O.R. Tambo International (JHB), and Mexico City (MEX). 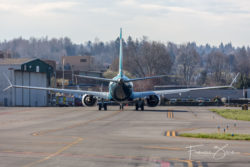 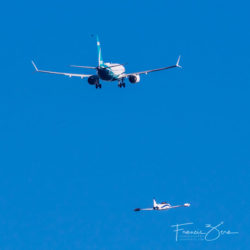 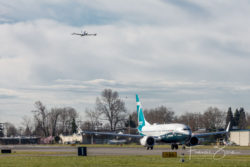 The MAX 7 spools up its engines as the chase plane

Experientially, the new jets are surprisingly quiet, even when standing on a midfield ramp during takeoff. That was made even more evident as one of Boeing’s two elderly, yet still quite serviceable, T-33 chase planes settled into place behind the departing MAX 7, with its wonderfully loud Allison J33-A-35 engine totally drowning out the new MAX 7’s departure.

I believe that the first 737s were actually built at Boeing field and had their first flight from there.

You’re quite correct, Bruce, and I’ve corrected the story.

Whats the little ‘drogue’ trailing from the vertical stabiliser? I cant remember seeing that on any test airplane before, but no doubt I’ve just not noticed them

Boeing announced another Max order just yesterday. Their news release states that there are now 95 customers – not 93, as you report herein. Check this:

Dale, It”s a trailing static cone, which measures the absolute static pressure. It”s on a wire that can be extended quite a way behind the plane to get readings that are clear of interference.

Many thanks – that would make sense when testing. Great photos btw

You”re welcome, and thanks!

Can you please add a discussion about the path from the factory floor to the hardstands. It looks to tight to get through there, and it must cross a TEENY little bridge not much wider than the wheel base over a real river channel . I would love to see a picture of the paint markings and a video of a new plane coming out and making its to the runway with twist and turns and tight space?

Boeing indeed taking the aviation industry by storm, first they introduced foldable wingtip and now this.

Originally based on the 737-700, Boeing announced the redesign of the MAX 7 derived from the MAX 8 at the July 2016 Farnborough Air Show, accommodating two more seat rows than the 737-700 for 138 seats, up 12 seats. The redesign uses the 737-8 wing and landing gear; a pair of overwing exits rather than the single-door configuration; a 46-inch longer aft fuselage and a 30-inch longer forward fuselage; structural re-gauging and strengthening; and systems and interior modifications to accommodate the longer length. It is to fly 1,000 nmi (1,900 km) farther than the -700 with 18% lower fuel costs per seat. Boeing predicts the MAX 7 to carry 12 more passengers 400 nmi (740 km) farther than A319neo with 7% lower operating costs per seat. It is a very efficient and high-tech aircraft.