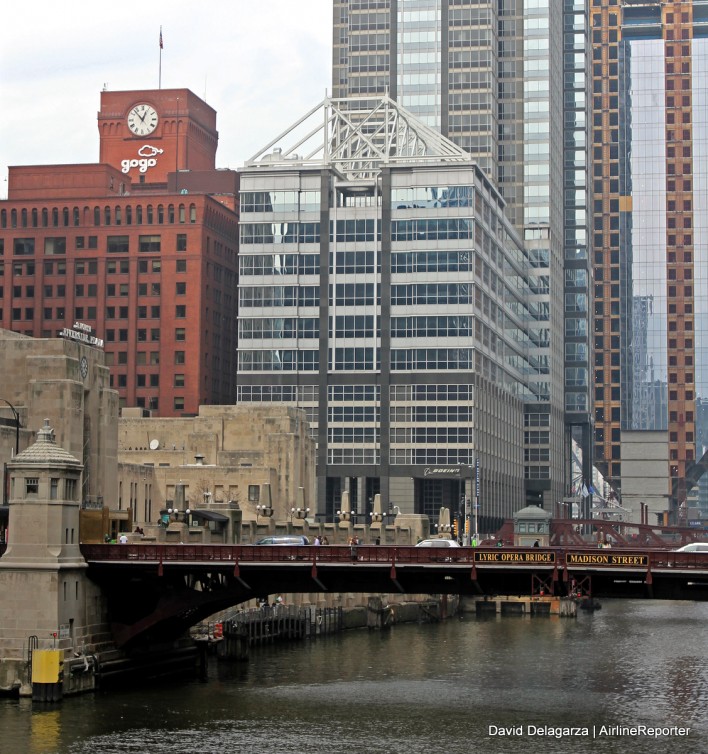 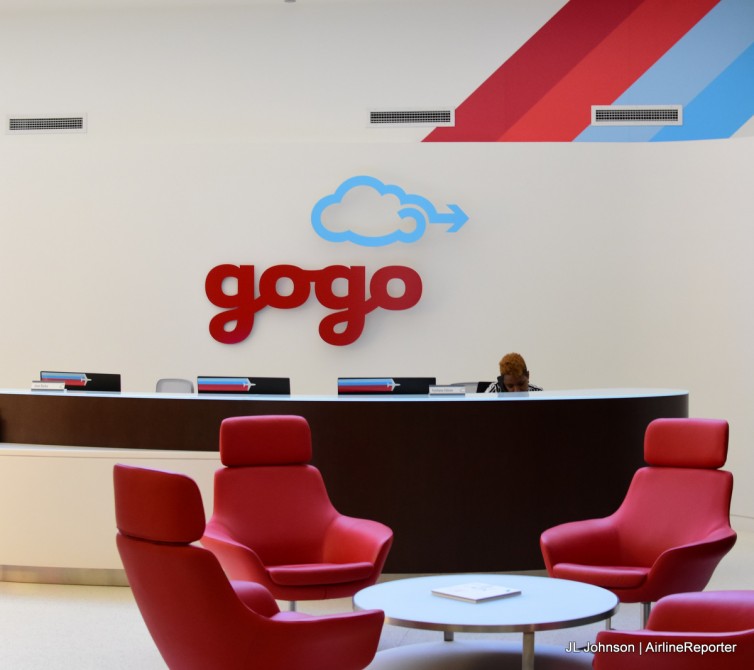 Arriving at the Gogo Building

The Gogo Building is conveniently located in downtown Chicago, in a diverse and busy area the locals refer to as “the loop.” I arrived to the 16-story, red brick building on an early Friday afternoon. Upon entering the lobby I was surprised at the dramatic difference between the outside and inside. The outside is well kept, but a typical turn-of-the century piece of architecture. The lobby, however, is bright, modern, and proudly displays a U.S. Green Building Council LEED Gold certification plaque demonstrating excellence in sustainability and conservation efforts.

As I approached the main check-in area, shared by all tenants of 111 N. Canal, the overhead music changed to Mr. Brightside by The Killers. I bring this up only because this isn’t what one would expect at a typical corporate office. Additionally, folks in the lobby seemed to be having a good time. Fun at work — what a great idea!

I was provided a visitor’s slip and told to scan it at a group of turnstiles behind me. Ok, easy enough. But what I wasn’t expecting was the turnstile to tell me which elevator to go to, with TV monitors directing me should I get lost. When I entered the elevator, it already had selected floor 15 for me — presumably based on my ticket scan. What a weird, but cool and technologically impressive, experience! Was this an elevator at the Gogo Building, or a turbo lift on The Enterprise? I half expected the doors to open in main engineering. 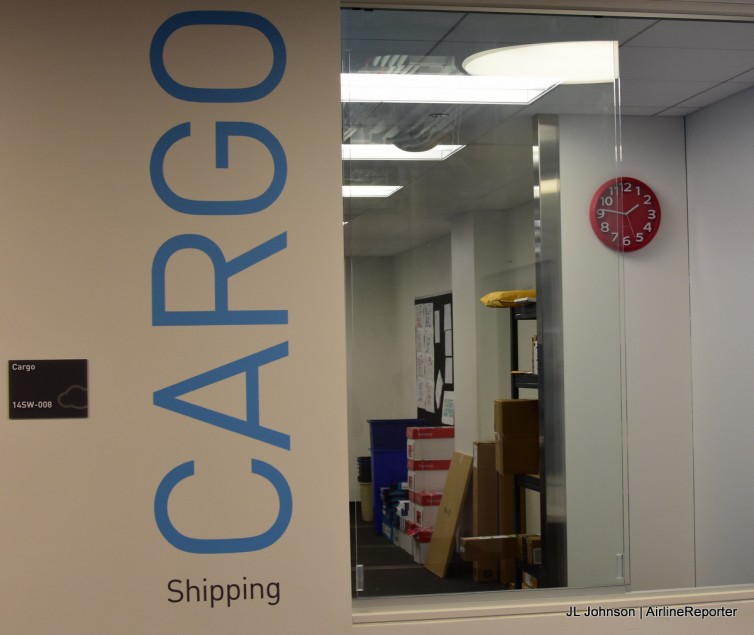 Gogo’s shipping department is referred to simply as Cargo. In keeping with the airline theme, of course.

Gogo occupies a number of floors at 111 N. Canal, but the customer-facing floor is 15. This is where my tour started. The doors of the elevator opened to a posh greeting area with great lighting and an over-sized logo, complete with Gogo’s iconic pointy-arrow cloud. Through a pair of large glass doors I came upon the mail room labeled as “Cargo” keeping with an airline theme which would become apparent very soon. 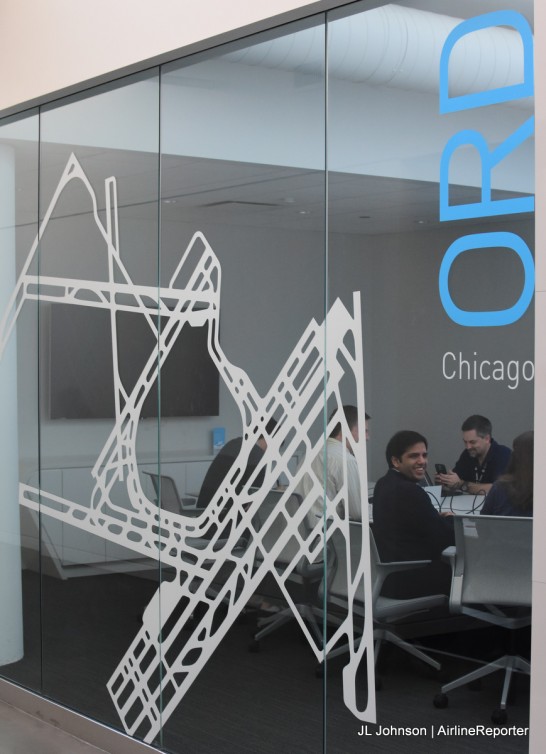 Employees in the ORD conference room smiling. These were candid smiles, not induced.

When I tour offices I’m sure to note how various employees behave in their habitats. For obvious reasons, those entrusted with tour privileges are sure to be cheery and pro-company, so it’s hard to get a good read. But how do folks on the periphery act? Are they smiling or falling asleep? Do they look stressed and unhappy, or do they seem to be having a good time? Yelling, or laughing? It’s these cues from those not involved in the tour that I tend to hone in on.

It wasn’t long before we approached a large glass conference room with a giant decal of the Chicago O’Hare airport layout. I raised my camera for a snap of the window and noticed the inhabitants laughing and smiling. Lucky me, I managed to catch the joy, as well as a shot of a very cool conference room.

BONUS: An Introduction to In-Flight Connectivity with Gogo 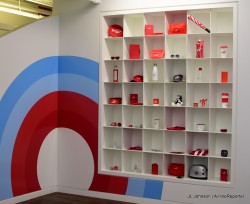 So many Gogo tchotchkes! Note the toaster which imprints the Gogo logo on your bread. 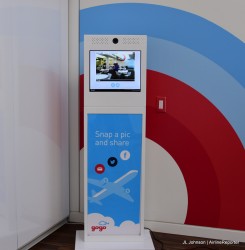 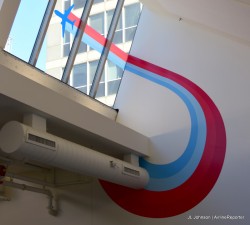 Once past the conference room we entered a dining / break area bathed again in natural light and Gogo branding. The area was home to what seemed to be multiple potlucks running in tandem. My tour guide and I were offered food from a number of folks. If only I hadn’t eaten immediately before…

I want to stop for a moment to reflect on the brand reinforcement here. Gogo-stylized branding was on every wall, but it wasn’t overdone. On one wall a built-in displaying dozens of Gogo branded tchotchkes, in the opposite corner, a selfie kiosk, and up above, a plane running across the skylight. Major props to the Gogo marketing and branding teams for going the extra mile to make the Gogo building visually appealing, with lots of natural light, both of which are conducive to happy and productive employees. 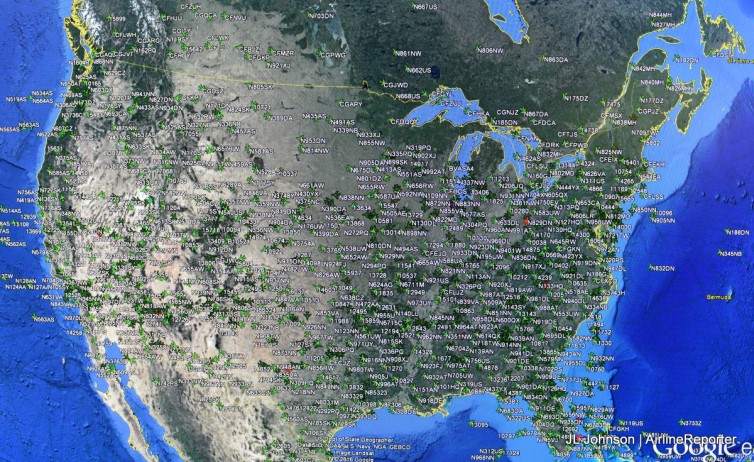 The next stop on the tour was Gogo’s NOC, or network operations center. The NOC sits behind an extra layer of security, but you wouldn’t know that for the large glass wall allows passers by a nearly unimpeded view of the NOC employees and most of their system monitor screens.

An entire wall of the NOC is covered in various monitors, some with sensitive data that cannot be photographed and are cleverly just out of sight from behind the glass wall. Some monitors display system health, some national news, the rest display technical data relating to satellites, etc. Really, the majority of the displays could just as well have been written in Klingon, as I couldn’t begin to decipher their meaning.

One monitor in particular (seen above) caught my attention — a map of the continental U.S. with an overlay of hundreds of N-numbers of Gogo-equipped aircraft. It’s hard to see, but each has either a green or a red circle. Green aircraft mean the connectivity platform is operating as expected. Red means something isn’t quite right. We spent a few minutes scouring the canvas looking for “red” planes and came up with three. If you happen to find yourself aboard a Gogo-equipped aircraft with connectivity issues, find solace in the fact that you are the 1%! 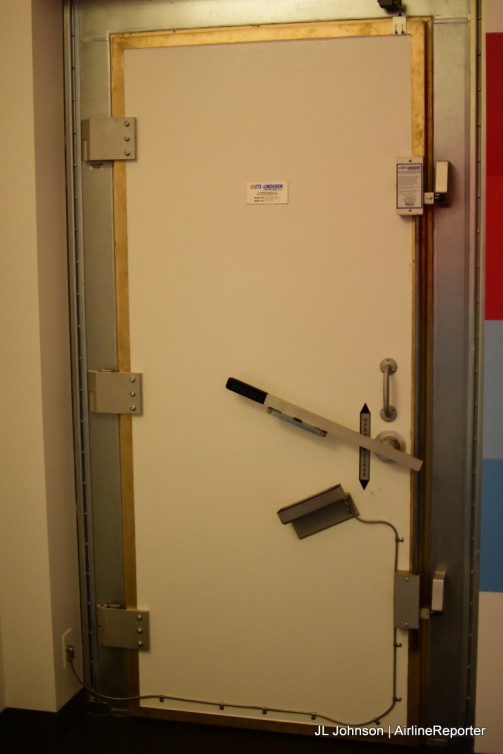 An AvGeek’s dream just behind this large, heavy door

Continuing down a hallway something piqued my interest. “What’s behind THAT door?” I asked, while pointing at an over-sized door that looked as if it belonged at the Federal Reserve or Fort Knox. My host phoned in a request to unlock the heavy door which he slowly pulled open. What’s behind the door? An AvGeek’s dream: A mock-up of an aircraft interior inside a radio frequency (RF) shielded vault.

This vault is where Gogo pays folks to test out their various in-flight connectivity products and portals. That’s right, Gogo pays people to sit in comfy leather airline seats for hours on end browsing the web, or doing whatever it is they would do if they were on an actual flight. This practice is called user acceptance testing, or UAT. I do a bit of UAT at my day job. Let me tell you, it’s not nearly as exciting. I mentioned to my host that AvGeeks would happily provide this testing service for free, or heck, some would even pay for the experience. Alas, AvGeeks are not a target demographic…too bad. 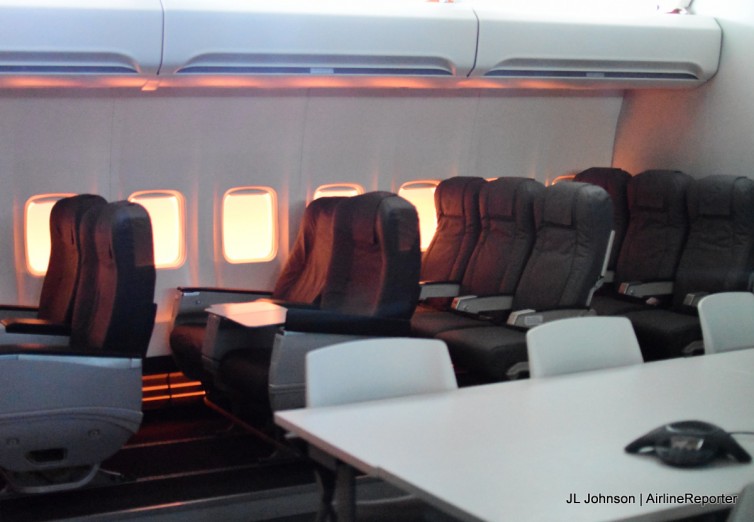 Wait. You’ll pay me to sit in a chair and browse the web? Where do I sign up?!

Why the RF shielding? Remember, the Gogo building is in the downtown of a large metropolitan area with a good bit of RF interference. To replicate the experience one would have at 36,000 feet, Gogo put their test room inside this completely shielded vault. My host told me to check my phone. Sure enough: No service. My iPhone had, however, connected to “gogoinflight,” a known network which I had connected to on a prior Gogo-equipped flight. 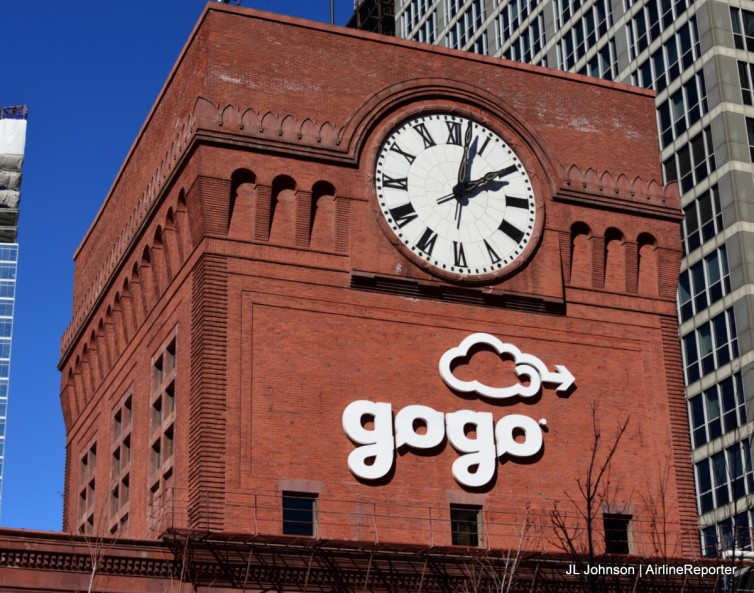 The Gogo Building’s branding seen from the rooftop common area

Our second-to-last stop would be the rooftop common area shared by Gogo Building tenants such as Uber, Twitter, and Potbelly Sandwich Works. It was a beautiful day, I could have spent hours enjoying the views and the weather, but there was one more stop on the tour… 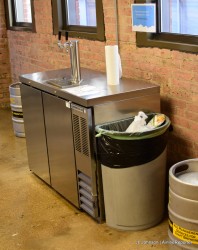 Free beer, because, why not? 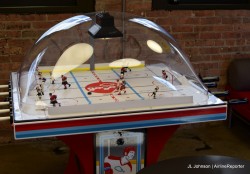 Who needs foosball when you have Gogo-branded bubble hockey? 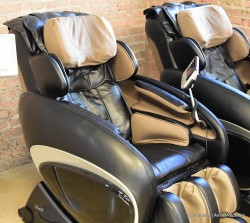 Stressed? Take a load off in a massage chair.

What’s better than a rooftop common area? A private one, of course! Gogo has their own rooftop area on the other side of the building reserved for employees and their guests. On the day of my visit it was closed. However, to get there one must walk through a break room that seemed eerily similar to a bar. Would you be surprised if there was free beer for employees on Fridays? Of course you wouldn’t, because at this point in the story you know Gogo goes above and beyond for their employees.

Gogo’s HQ and its people remind me a lot of Southwest Airlines. To be compared to a company whose name queried on Amazon.com yields 5,095 books is perhaps one of the highest compliments I can offer. Rumors abound that Southwest is looking to move away from their dated Row44 (Global Eagle) in-flight connectivity and entertainment product. This Southwest A-Lister (elite frequent flyer) can only hope the airline teams up with culturally similar Gogo to secure their new speedy 2Ku service.

The facility which an organization inhabits says a lot about its culture (or lack thereof) and provides a glimpse into the personality of said organization. In today’s millennial-focused economy, companies are slowly realizing that it’s important to have a “fun” personality for customers, and a similar environment for employees. This goes a long way towards loyalty, and recruiting the ever-illusive (and picky) creative class. Gogo clearly gets this, and I believe it will allow them to keep their competitive advantage.

Fancy a tour of The Gogo Building? Reach out to them on Twitter or Facebook next time you are in Chicago. Tours are based on availability and the company loves connecting with their customers.

NOTE: Travel and lodging was courtesy of Gogo for an unrelated event. My opinions are always my own.

Isn’t that Boeing Headquarters next door?

that’s the first thing I noticed in that first photo!

It sure is! And United is just a few blocks further.

Did you visit the Boeing store. In the lobby on riverside. I pass it on the way the the train station. Totally cool stuf. You also can peek in the cafeteria which is filled with tons of aviation themed decor, like the those pricey Boeing window cutouts.

I didn’t have an opportunity to, unfortunately. I do frequent the STL one, though.

Great story. Next time I’m in a different windy city, I’ll see if I can sneak in as a rep from SWA.

I appreciate the love you guys show GOGO, but especially since you’re located in Seattle, was hoping you’d be first with reporting the final flight of the Boeing 247D–the first “modern” airliner–from Everett to Boeing field. The hometown team should at least beat Airways News to the punch!

Schedules got in the way on this one. Luckily it was covered by our friends at AWN and saw the story pop up on a lot of legacy media channels! Personally, I was sad that I wasn’t able to see it in person, story or not.