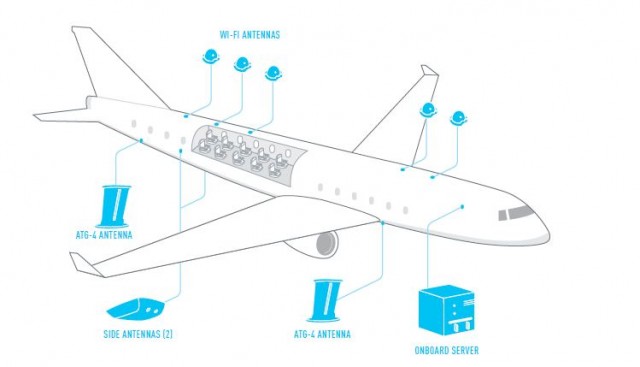 First, let’s examine the basics, as a variety of connectivity technologies exist on the market today. For the sake of simplicity, I’ll cover the most common.

This is the technologyÂ most domestic flyers areÂ likely familiar with, and for good reason. For years it was the standard in the connectivity market. As the name suggests, ATGÂ allows equipped planes to communicate withÂ groundÂ towers, over 160 of them in fact. The key here is that these are land-based, as opposed to satellites which we will discuss later. This is an early connectivity technology which Gogo has dominated since the FCC awarded them with exclusive use of key wireless frequency spectrum.Â Today there are over 2,000 ATG-equipped aircraft flying in North America.

ATG limitations include geographic restrictions –Â coverage includes the continental United States, as well as portions of Canada and Alaska. Additionally, speed maxesÂ per plane are anticipated to run around 9.8 MBPS on thoseÂ running the latest ATG (ATG-4) technology. Now, 9.8 MBPS isn’t bad, but when that starts being divvied up amongÂ numerous passengers the slice of the pie could dwindle. Thankfully Gogo and their airline partners prevent data-intensive traffic such as internet video streaming (like Netflix and HBO GO) as well as voice-over-internet (VoIP) calls. My experience with ATG has been generally positive over the years, with most of that experience being aboard Delta planes. 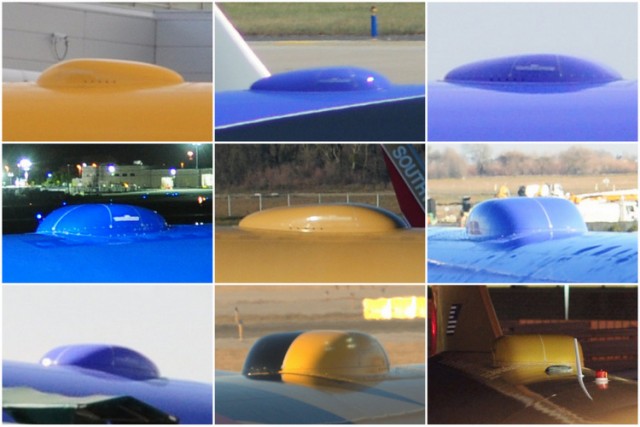 The two prevailing satellite connectivity offerings are Ku and Ka, each pronounced as two letters. I will spare the details, but a comparison between the two would be similar that of AM versus FM radio. A rough comparison for sure, but one that seems fair. (Satellite technologists, please don’t come after me!) Each has its positives and negatives, which I won’t detail here. Examples of Ku and Ka offerings in the wild include the Row-44 (Global Eagle) connectivity offered aboard Southwest Airlines (Ku) and Jetblue’s FlyFi, which is a Ka product from ViaSat/Thales. Gogo has their own Ku offering as well.

What is striking to me about many of these products is how bulbous they are. Pictured aboveÂ are a number of “WiFi bumps” – known in the industry as radomes. Notice how imposing they are. When seen up close, they very much look like a hump on a camel’s back. Great for Wednesday #HumpDay photos, bad for fuel burn. Ryanair, an Irish Ultra-Low-Cost-Carrier (ULCC) recently announced a plan to introduce satellite connectivity within their fleet. The expense on top of up-front equipment sourcing and instillation costs? A 2% drag on efficiency, estimated to cost the company $23.6 million USD per year in additional fuel costs. I have read of similar efficiency hits among other carriers as well. 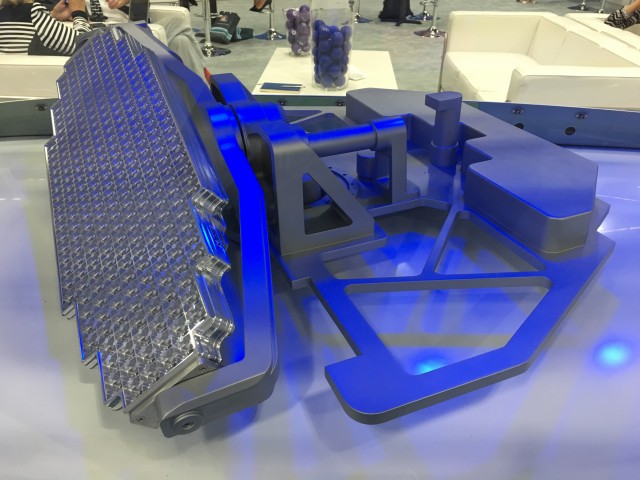 In the in-flight connectivity market, thin is in. Gogo is close to launching their new, award-winning 2Ku technology. 2Ku, as one might assume, uses dualÂ Ku antennas. Gogo’s 2Ku offering is expected to run twice as fast as other Ku offerings. 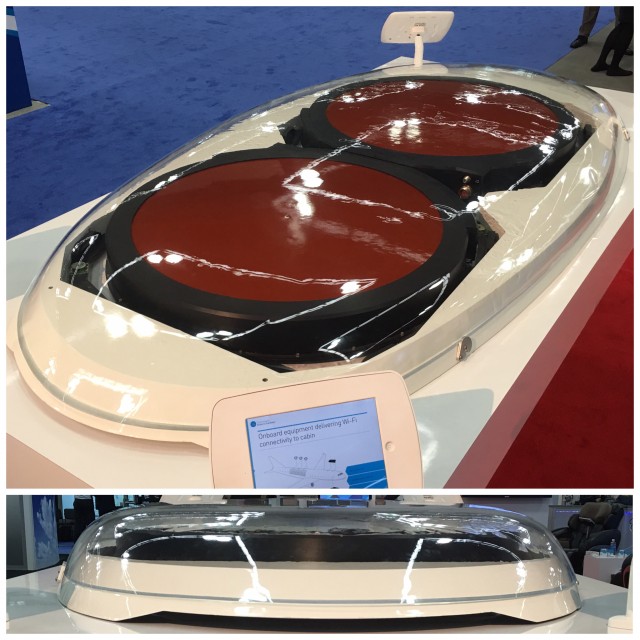 Why does this product look more like a sleek dualÂ pizza warmer than a traditional radome? The new technology built into Gogo’s 2Ku solution makes use ofÂ beam-forming (a concept used by some of the more advanced home WiFi routers) to aim signals electronically instead of relying on moving parts as seen by other products. The industry term for productsÂ which have moving parts is “gimbaled,” meaning they pivot on various axes. Aiming electronically means quicker response times, lower maintenance costs, and a thinner profile. In the case of Gogo’s 2KU radome versus other radomes on the market, roughly 50% thinner. Indeed, it was far thinner than theÂ other radomes I saw on display at the APEX expo – and believe me, there were many. Sleeker profiles mean less fuel burn and lower overall ticket prices.

But let’s talk about what really matters. Is it fast? Gogo’s 2Ku offering is expected to deliver peak data speeds of around 70 MBPS, which isÂ more than twice as fast as other Ku-based products on the market. 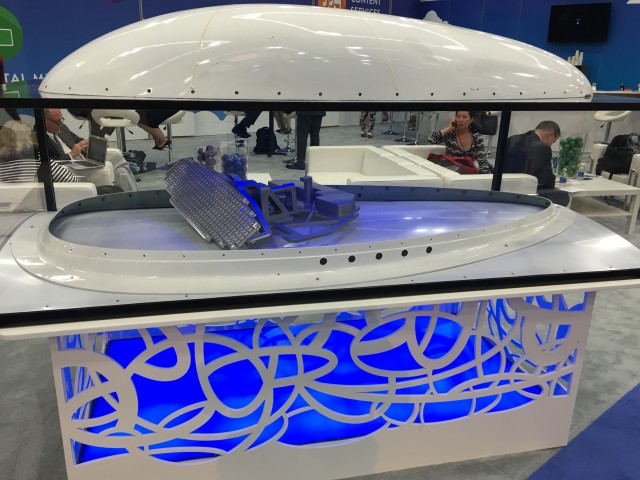 2Ku is not currently available, but airlines are anxious to get on-board. When I spoke with Gogo last week, there were over 500 aircraft spread across a number of airlines lined up to receive the new technology once it becomes available later this year. 2Ku is currently in late trials aboard Gogo’s 737-500 testbed,Â and on most days that plane can be found flying around the central and eastern part of the U.S. on trials.

Aeromexico was the first airline to sign up for Gogo’s 2Ku and is expected to launch this year, followed by Virgin Atlantic. In 2016, Air Canada, Delta, United, and GOL will begin to receive their 2Ku products.

We are excited to follow the development of 2Ku, and the in-flight connectivity market as a whole, as it very quickly evolves. We hope to bring a story from aboard a Gogo 2Ku-equipped airplane in the very near future.

Disclosure: Travel and accommodations were provided by Gogo. Our opinionsÂ are always our own.

https://www.airlinereporter.com
75th Anniversary of the Battle of Britain – Duxford 2015
Out of This World: The New 737 Space Bins
4 Comments

Clearly, Gogo (and the other flying ISPs) are onto something big and something good and something that will grow over time. That mouthful said, Gogo are still in the pre-beta development phase and have a LOT of work ahead of them. Sadly, the service remains extremely expensive and extremely slow when shared with more than a pair of other users – or it simply does not work at all. In plain terms, a truly grand idea for which the flying public is paying the R&D costs and far too frequently receiving nothing. (Caution: No Refunds!!) Gogo and the others will eventually make this service ‘fly,’ but I think they went public long before they were ready for Prime Time. Personally, I’ve used the service nine or ten times; only one was satisfactory. (A red-eye with a load factor of ~~25%, most sleeping. ) It WILL happen, but not quite yet. Other than leaving out the finer details about the service not quite working, a very informative post J.L. Thank you!

Cook, always great to find your comments on my pieces. I agree, still an awful lot of room for technological advancement in this arena. Hopefully the increased costs you mentioned will be mitigated by reducing drag via the low-profile radome. One can hope, at least.

Excellent and informative article! As a former Navy radar technician (C & X bands), I have continued to be interested in all things in the sub-light electromagnetic spectrum (I have even taken pictures of 2k foot TV towers!). Plus being a small-AV Geek and IT professional, I am also interested in the state of Wifi in commercial aviation.

I also loved the sidebar to your article in Southwest’s IFE. I had the pleasure of experiencing SWA’s IFE using my Samsung/Nook tablet this past Ocotber. I loved that I could use my own device and didn’t have to look straight ahead to enjoy it! And I , as you noted in the article, was not unaware of the installation and weight-savings cost and maintenance benefits of this service. Kudos to SWA!