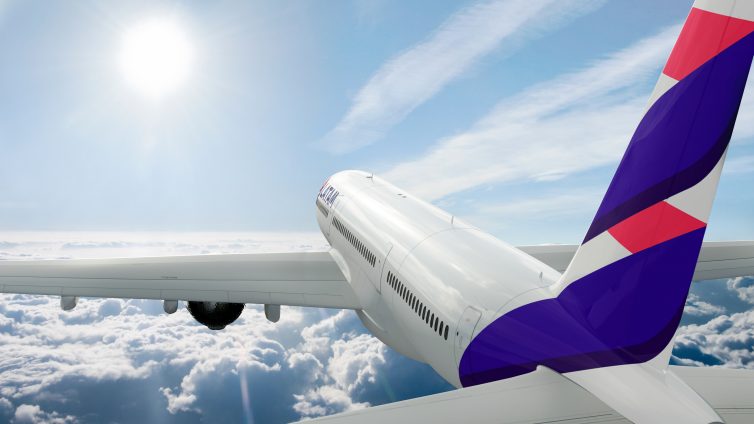 Another view of the Airbus A350 with the new livery – Image: LATAM

LATAM’s first flight of the new livery will be on May 5, 2016, using the Boeing 767.  We look forward to some real-life shots of the livery to share with you.

Here’s an excerpt from the press release:

’œIn the coming days, aircraft with the new LATAM image will take to the skies, representing an historic milestone for the leading airline group in Latin America,’ said Enrique Cueto, CEO of LATAM Airlines Group.  ’œIt will be a gradual change with the principal objective of simplifying and improving the travel experience of our passengers.

’œIn the coming weeks, our passengers will start to experience LATAM with the ability to book tickets via the LATAM website, accumulate kilometers using LATAM’s frequent flyer program, check-in at LATAM counters, relax in LATAM VIP lounges and most significantly, fly on LATAM-branded aircraft.  We will continue to optimize the most extensive route network in Latin America, the most modern fleet in the region and invest in digital solutions to offer our passengers a more personalized travel experience.’

The first flight of a LATAM-branded aircraft, a Boeing 767, will depart from Rio de Janeiro on 1 May on a one-off journey to Geneva to collect the Olympic torch.  The specially prepared aircraft will then return on 3 May to Brasilia, the starting place of the Rio 2016 Olympic Torch Relay between more than 300 Brazilian cities.

More than 50 aircraft are anticipated to be rebranded before the end of 2016 and the fleet-wide process is expected to be finalized in 2018.  Repainting takes on average six to 12 days per plane and will be scheduled in accordance with routine maintenance to maximize efficiency.

Mock up of the new LATAM airport presence – Image: LATAM

So, what do you think of the new look?

The logo mark, using South America, is brilliant. The planes are too bland tho.

Absolutely agree. The logo and corporate identity is truly great but the livery looks generic and doesn’t really say anything. Can’t help thinking how impressive is that Latin America’s biggest airline group is based in such a small country as Chile tho, kudos to the LAN managing team in Santiago.

What a boring livery…..

Another airline with a n oring eurowhite fuselage….

The new logo is nice, however, I am very unimpressed with the new livery, & this has nothing to do with the fact that this little Aussie was born in Santiago, Chile. I guess I can see how it will eventually grow on me.

Hello Patrick. This livery will have to grow on me as well – I agree with you wholeheartedly.

Sorry to see the back of both LAN (Chile) and TAM. Especially JJ which did so much for the nation’s international services following the collapse and disintegration of VARIG. Entirely in my humble opinion of course.

Have a nice day.

Not so bad, but if Chilean colours are bright , is there any trace of brazilian flag ?

The look is more South America, since LAN (Chile) and TAM (Brazil) are now one airline.

No creativity at all from the chilenitos of LAN, I have said this many times, the logo to me was inspired in the AfBAA | African Business Aviation Association.

What’s the matter lio? You sound like sour Argie.