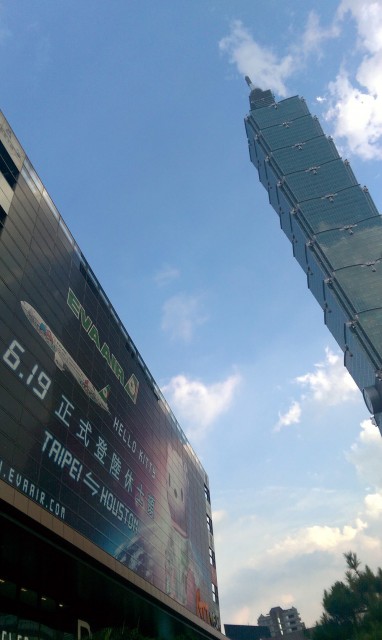 So why Houston and why Hello Kitty?

Hello Kitty gets attention. Not only is there a higher load factor on routes with a Hello Kitty liveried plane (versus a normal EVA livery), but we also had the huge media event. I am sure that if the inaugural to Houston would have happened without Hello Kitty, there would have been much less media and you likely wouldn’t be reading this story right now. It makes sense that when EVA starts a new route, they try to put a Hello Kitty aircraft on it to amp up the attention. 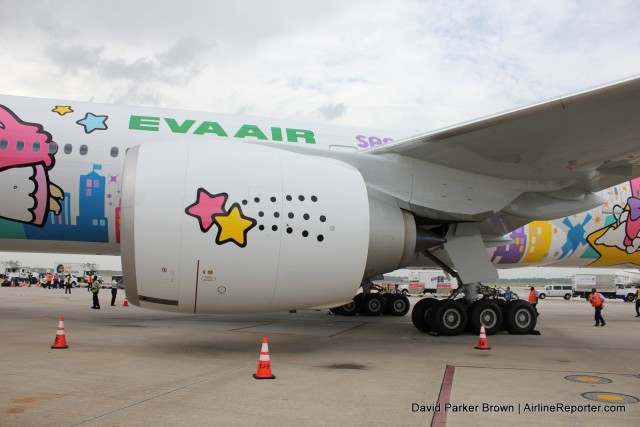 The GE90 is a superstar engine

There were some that felt Texas was too cool for something as “silly” as Hello Kitty. First off… simmer on down now. Texas is known for the land of bigger and better, and what way to do an inaugural bigger than Hello Kitty? 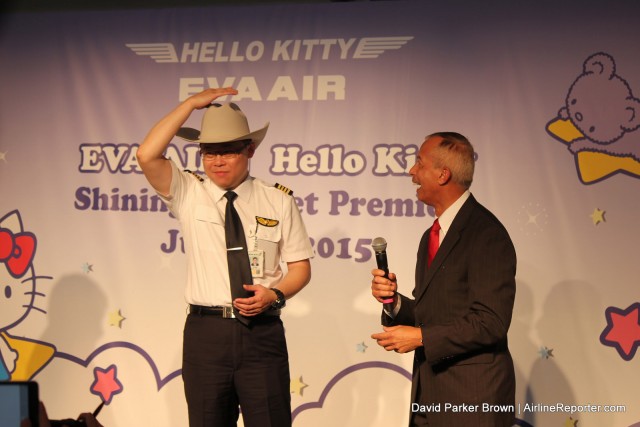 A big cowboy hat welcome to the Chairman (and a Captain) of EVA, Chairman KW Chang

’œI initiated our Hello Kitty Jet concept to make flying fun. Travelers’ responses in Asia, Europe and the United States tell us we are succeeding,’ said EVA Air Chairman KW Chang. ’œThe support we have received from the City of Houston, Houston Airport System and Texas makes us feel welcome. By flying our latest Hello Kitty Jet and offering convenient one-stop connections to cities throughout Asia, we believe our new service will be a Texas-sized success.’

EVA went with a space-theme for the inaugural. Even ads were all over Taipei with astronaut Hello Kitty. It is not so obvious at first, but space is pretty well connected with Houston. 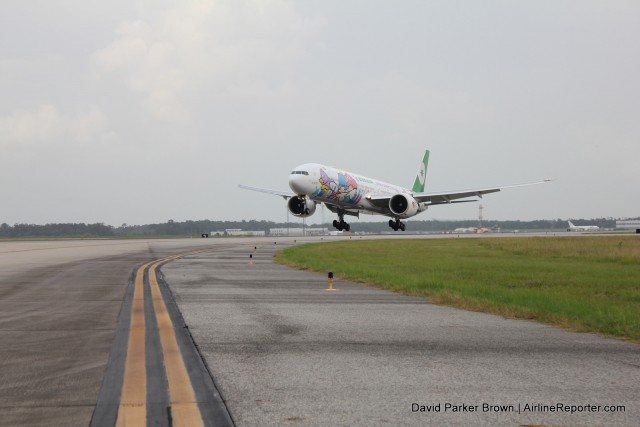 Close to touch down at IAH

Although the Hello Kitty party would be pretty exciting, I was very much looking forward to being on the taxiway to watch the themed 777-300ER land at IAH. 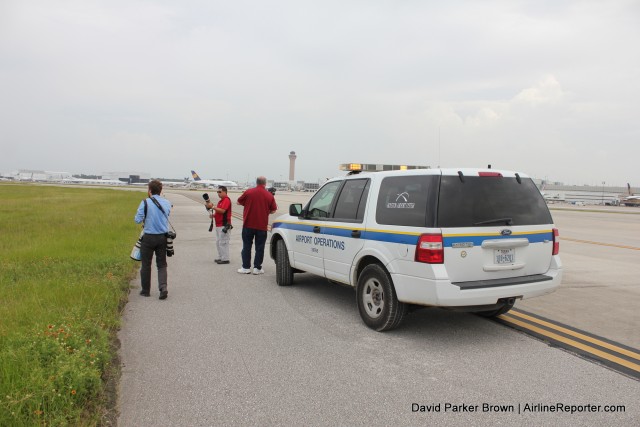 Soon after landing, we piled back into the Ford Expedition and tried to beat the 777 back to the gate to get some additional photos. No worries, the aircraft had quite a bit of taxiing to do and we were able to get our positions before the water cannon salute commenced. 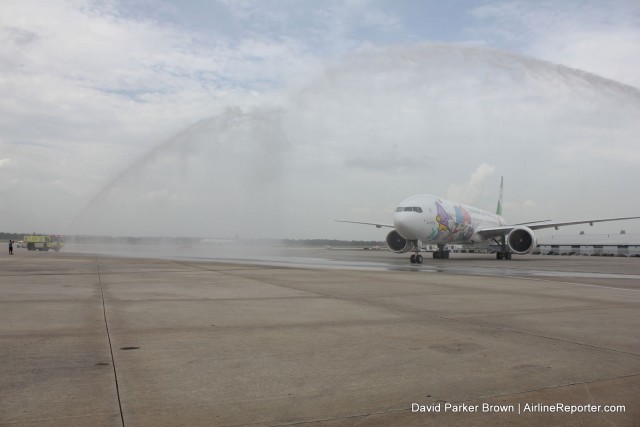 What inaugural would be complete without a water cannon salute?

By the time that Shining Star made it to the gate, there were hundreds of people standing to watch it. Many were invited media, but others were just airline and airport employees who made the time to watch the plane arrive. 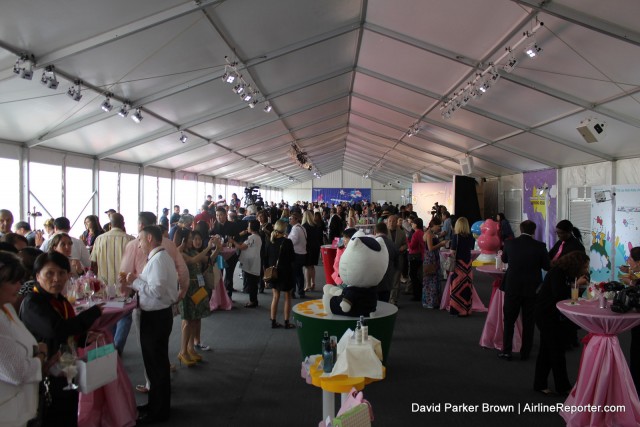 The large party tent where the 777 pulled up

The game plan was to drop off the passengers in the terminal, clean up the aircraft and then tow it over to a cargo area, where a large tent was set up for the celebration. Since a few of us had some extra time, we decided to go do some spotting instead (will share those photos in a future story). 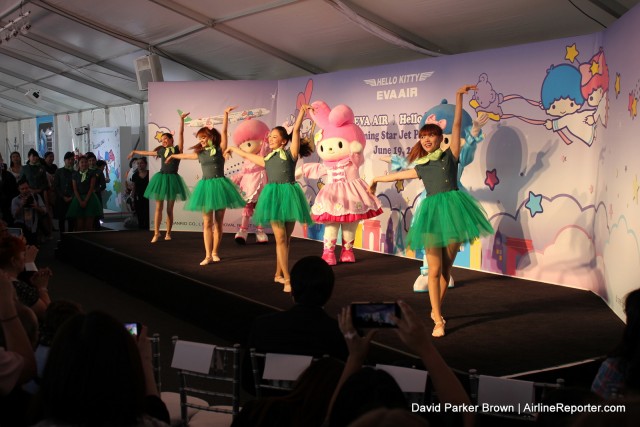 While we waited for Hello Kitty and her new plane to arrive, we were entertained with a load of goodies and even some VIP photo opportunities. Before long, we were told that the 777 was on its way and we all headed out to the hot and humid (oh…so….humid) weather. 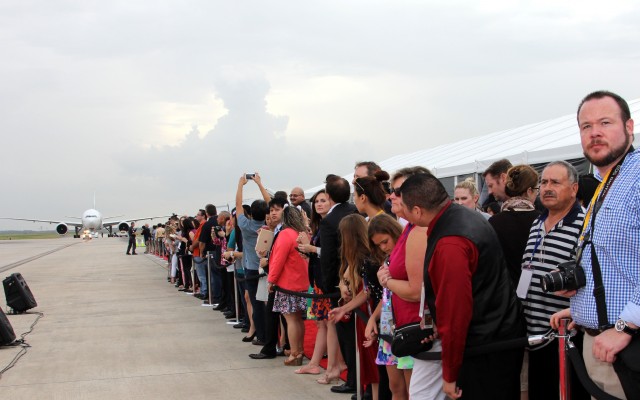 My version of “Blue Steel.” Not sure why I am looking the wrong way – Photo: Houston Airport Systems

Slowly, the plane was pulled in front of the waiting group. With the landing and gate things moved quick and I wasn’t previously able to really slow down and check out the livery. Even if you aren’t a fan of Hello Kitty, you can at least appreciate that the livery is quite impressive. 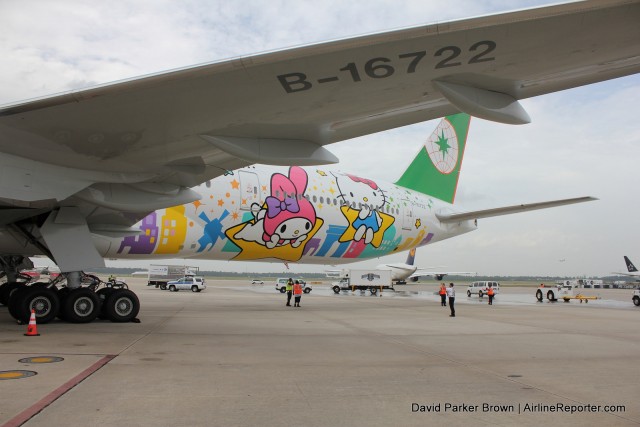 A closer view of the rear of the plane. Notice the Lufthansa A380 and a bit of tail from the Star Alliance, United 777

Not only are there a few shining stars, but also the “Texas-sized characters,” Little Twin Stars Kiki and Lala, flying through the skies with their teddy bear. Of course, it wouldn’t be complete without Hello Kitty and her friend My Melody. 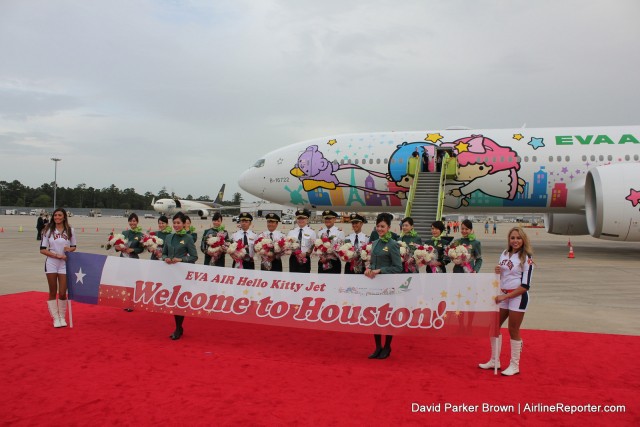 The flight crew joined some cheer leaders for a photo op

The flight crew (who were trying their best to be excited, but just flew the 16-hour flight to Houston) first came off the aircraft and did a few photo ops on the red carpet. Then the star of the show herself came off the plane: Hello Kitty. 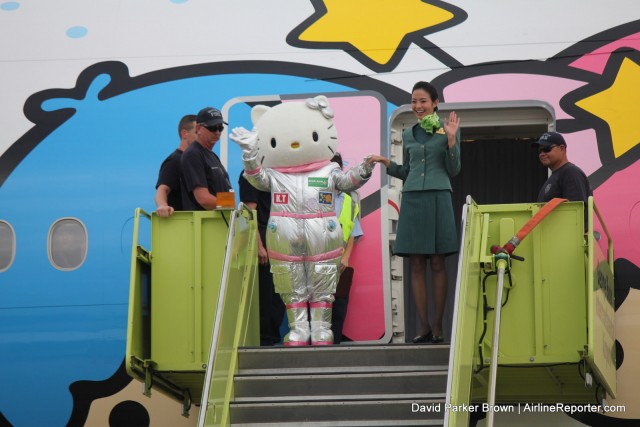 As if the event wasn’t already a bit surreal enough, when she hit the bottom of the stairs, music started playing and it was Billy Jean by Michael Jackson. Say what? Yup!

Some didn’t get the connection, but it had to do with the moonwalk, space, and Houston. Not gonna lie… it gave me goose bumps. 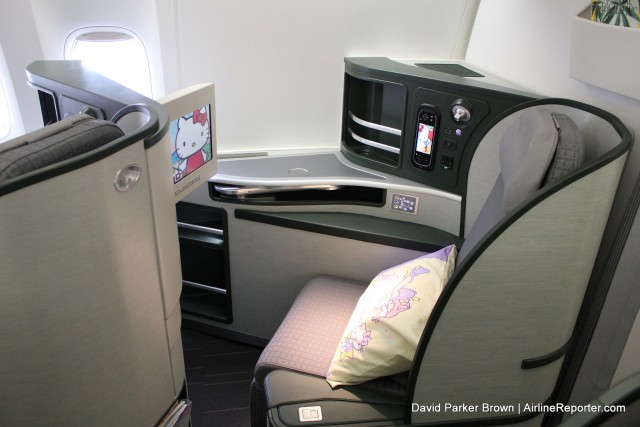 After the dancing stopped we were able to get a tour of the specially-themed aircraft. There were probably a few hundred people shuffled through the plane and I did my best to duck out of other people’s photos and be sure to get my own without them. It was almost like a game, and with all the Hello Kitty stuff around, it made it feel more so. 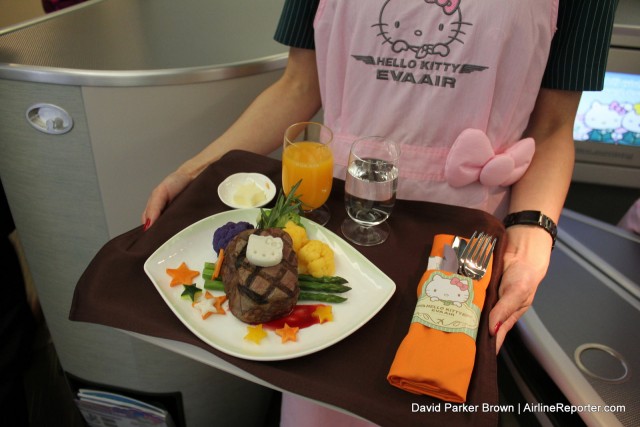 Some of the special Hello Kitty-themed food

Making my way through the plane, it became obvious that the Hello Kitty presence was known, but not too overwhelming. It seemed that there was more for those riding in economy versus those in business, but either way, passengers who want to have a Hello Kitty experience could, and for those that didn’t care either way, they were okay too. 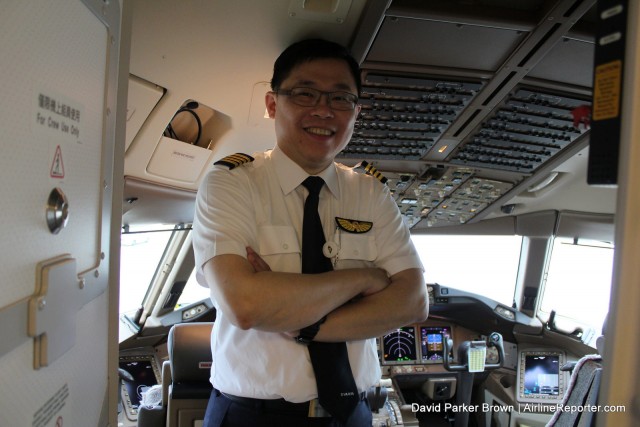 My favorite part of the tour was getting to the flight deck. Of course, seeing a flight deck never gets old, but I became more excited about the person who was in it: EVA Air Chairman, KW Chang. Not only is he a 777-rated pilot, but he also landed the plane in Houston. How cool!

However, I was a little disappointed that there weren’t any Hello Kitty themed items in the flight deck — not even fuzzy pink dice. 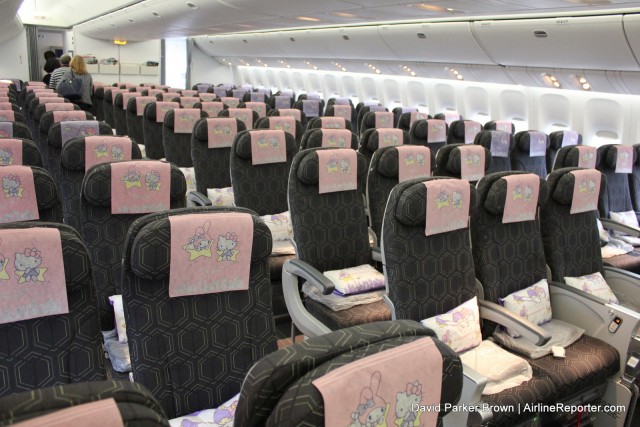 The economy section of the Hello Kitty 777

In retrospect, this was really a cool, yet a little strange, event. Either way, I have to say that it was very well organized and planned, which seemed to be a common theme I would encounter during the rest of the time with EVA Air.

After the event concluded, I had a few hours until I would re-board the same plane and fly to Taipei. Of course, you will be able to read about that adventure soon! 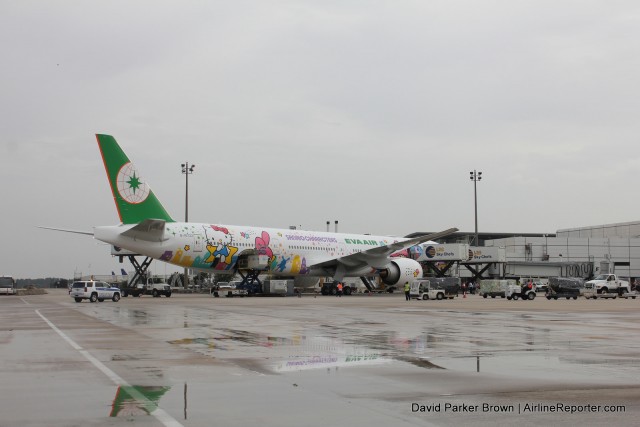 The Hello Kitty 777-300ER sitting at the gate in Houston

Houston is just the latest North American city for EVA Air, which includes Los Angeles, New York, San Francisco, Seattle, Toronto, and Vancouver. If you are looking to catch a Hello Kitty jet on your own, the airline offers a pretty detailed website to see where they will fly.

I wasn’t sure what to expect going, but I have to say that it was enjoyable and Hello Kitty was starting to grow on me. I just wasn’t sure how I might feel after my long flight after a lengthy event, all surrounded by Hello Kitty and her friends. But I did know I was looking forward to finding out.

See more photos of the Hello Kitty party in Houston via our Flickr page.

Note: EVA Air paid for my flight to Houston and accommodations to cover this story. All opinions are my own.

There have certainly been weirder aircraft taking to the skies…

Interesting note, this plane was just delivered to Eva Air on May 29, 2015. So not only using Hello Kitty, but the latest in technology and comfort.

Great piece. But I couldn’t stop thinking about what misery the person dancing in the hello kitty space suit was going through in the hot, humid Texas summer. Get that kitty a raise!