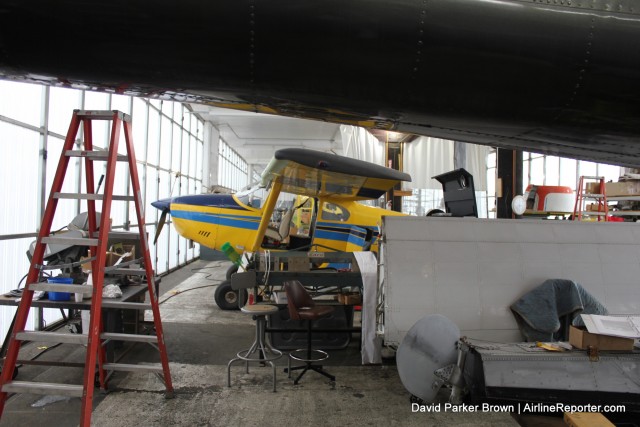 The inside of the older hangar, where non-Kemore planes were being worked on

Upon arriving, I was met by Rob Richie, who is the Director of Maintenance. He asked what I wanted to see and I explained I wanted to know more about what makes Kenmore Air tick (literally and figuratively).

BONUS: Flying a Kenmore Air Seaplane to the San Juans

When I asked him how long he had worked for Kenmore, he told me, “not that long,” followed by saying, “about 15 years.” Turns out that many working there feel the company is more like a family than just a job. 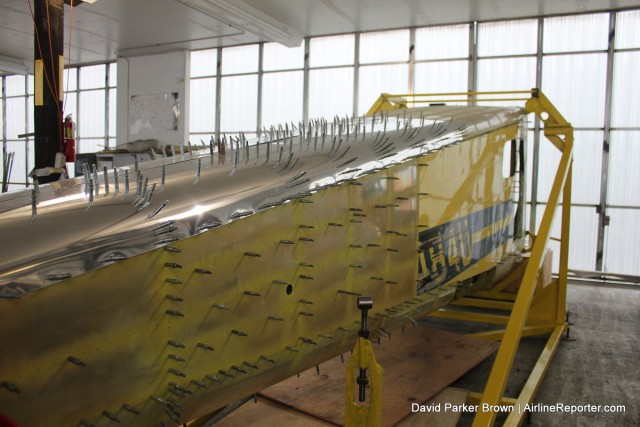 Work being done to restore an acquired, but totaled, plane

Rob was extremely knowledgeable about everything related to Kenmore Air, as well as each of the planes that were there. Yes, seeing the airplanes, the engines, and smelling the oil were all wonderful, but hearing the stories and connecting with the aircraft was, no question, the best part of the tour. 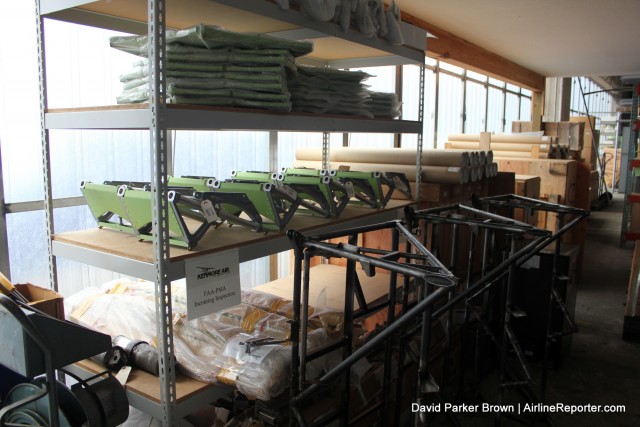 Parts ready to be sold

Our first stop was the old “T” hangar, which used to be the main repair facility. When I made my visit, there were still planes under different stages of re-work. Some were there for standard maintenance, but another was a recovered total loss, requiring a bit more work. 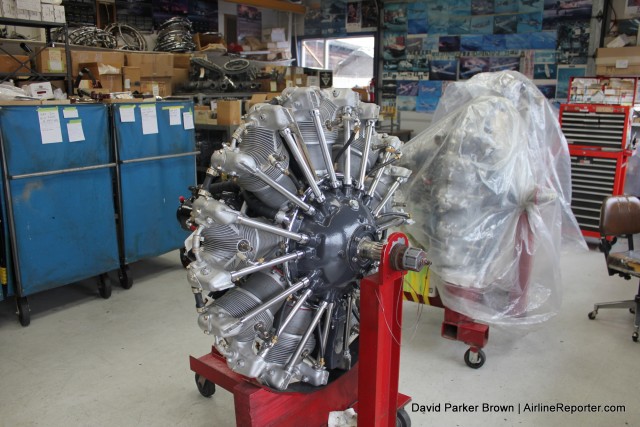 Kenmore Air doesn’t just work on its own planes; actually, quite the opposite. A big part of their business is working on other seaplanes and providing parts for aircraft that are located around the world. Be it the smaller nut to something most substantial, Kenmore Air rarely says, “no,” to finding a solution. 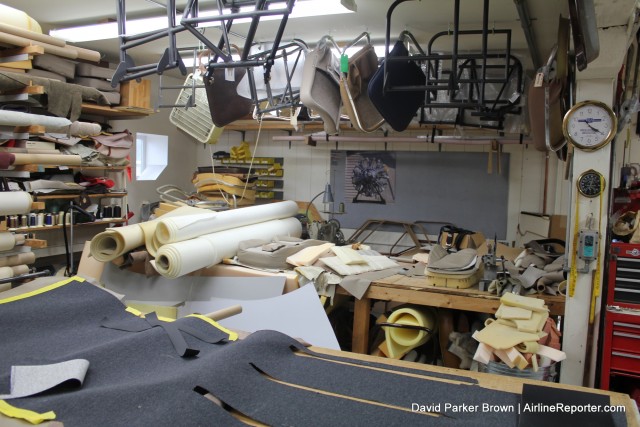 When restoring an aircraft, a part might be missing or unrepairable. Sometimes it can be purchased, but for many of these aircraft, new parts haven’t been made in years. Often, Kenmore will fabricate their own parts, have them certified, and use them to get planes flying again. 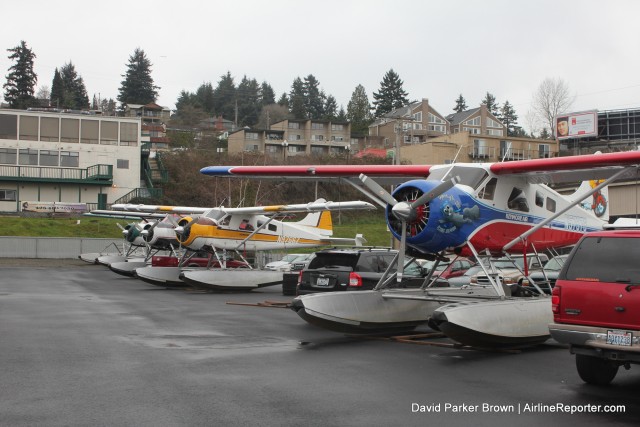 Car and planes mixed together

When Kenmore finds “new” (sometimes made in the 1960s, but never used) parts, they purchase them, preserving and selling them to potential customers. They have a pretty extensive collection.

BONUS: Flying With Kenmore Air to the San Juans: They are more than seaplanes!

The only two things that they really won’t do on their own: propellers and major electronics. Neither are really cost-effective to do themselves. 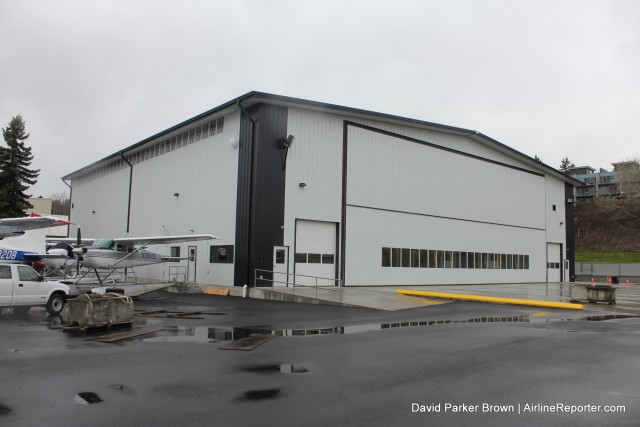 The new hangar in Kenmore

While there is no runway located at their Kenmore facility, their maintenance work is not limited to just seaplanes. If someone wants their land-based aircraft fixed, or to have floats attached, they will likely land in Renton and have their plane barged up Lake Washington to Kenmore. 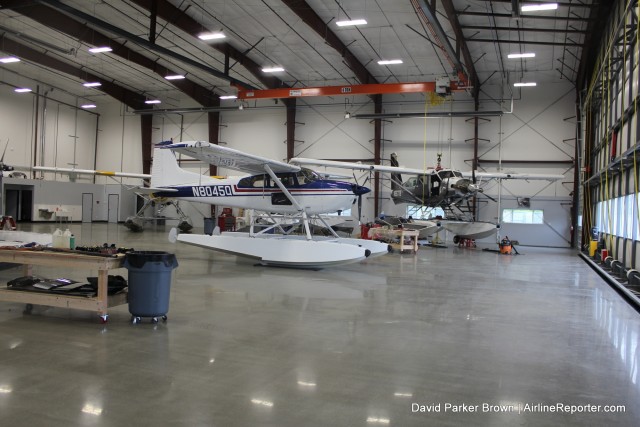 Inside the new hangar

One of the challenges Kenmore faced with the older hangars was getting the larger Otters inside. The airline had to take off their wings to get them in the hangar, which took extra time.

The new hangar not only allows an Otter to be worked on, with wings still attached, but multiple Otters can be under repair all at the same time within the hangar. 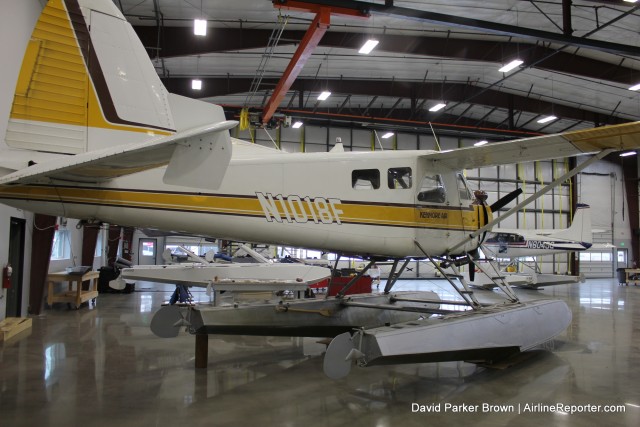 One of Kemore’s planes being worked on

The new hangar is a major improvement for Kenmore, their operations, and potential future growth. Rob wasn’t even sure of all the benefits they would experience, until… well… they experienced them. 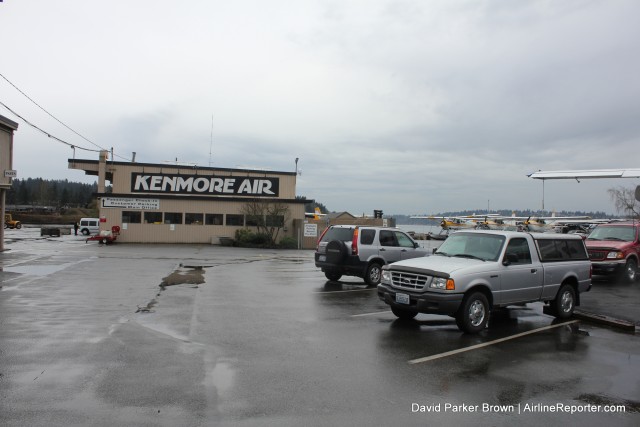 The main parking lot for the Kenmore Air terminal

Throughout the years, almost every Kenmore employee that I have met has had a close family-like bond with the organization. It is like being part of a cool family that owns a bunch of seaplanes.

So next time you view a seaplane flying around somewhere, know that a piece of it might have come from Kenmore. Of course, if you are flying on a Kenmore Air aircraft, know that there is a great team (and facilities) making sure you arrive safely.

https://www.airlinereporter.com
Hello Kitty! Quite the Hoedown in Texas with EVA Air
Belavia Airlines: Its Soviet Past and Passenger Experience Present
2 Comments

“Barged up Lake Washington to Kenmore” Serious? That sounds awesome. I’ve seen planes on trains but never a plane on a boat. Make it happen, DPB!

I also live about a mile from Kenmore Air. If anyone is visiting the area, it is great fun to just watch the seaplanes land and takeoff at Kenmore Air Harbor. Summer time is the best time to spot seaplanes as they run a much more frequent schedule.