This is part of a series about visiting Papua New Guinea. Â InÂ part one, Bernie reviewed flying Air Niugini. Â InÂ part two, he visited (New) Ireland and (New) Britain via a Q400. Â InÂ part three, he checked outÂ remnants of war and got a tower visit. This is the final installment.

I have now flown Air Niugini (airline code: PX)Â more than most Americans ever will. The thing is, no one I knew remotely well enough at the time worked for the airline, which is rare for me. I did, however, know plenty of people who work for their fiercest competitor – Airlines PNGÂ (airline code: CG). Â Clearly, something I needed to take a flight! 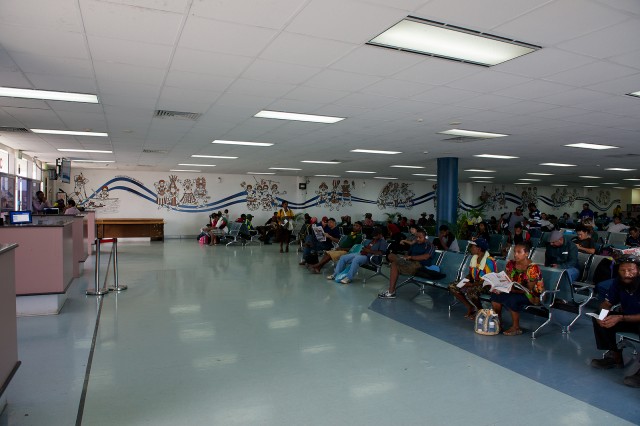 At the moment, CG operates a fleet of eleven Dash-8-100s, with another soon to enter service. The Dash that I flew on wore a non-standard livery, in that it carries a split-cheatline, probably because its previous operator in Bangladesh (United Airways of Bangladesh) had a livery close enough that painting was not worth it. They are selling off their remaining DHC-6s and slowly transitioning the crews over to the Dashes.

Much like PX, their main hub is also Port Moresby’s Jacksons International Airport. CG, however, no longer does any scheduled international flying. In other words, one will never hear their callsign “Balus” used on the radio. Balus, if you were wondering, is not only the local word for airplane, but also pigeon. For reasons even Air Services PNG cannot clearly explain to me, even commercial airlines refer to their aircraft by their registrations rather than flight numbers. For some reason, they have decided that callsigns are a purely international venture.

After a brief tour of the airport operations office, it was time to pass through domestic security once more into the heathrowesque domestic departures area. I believe there may actually be a Air Nuigini lounge immediately after security, but I was not 100% sure if it was open. Moreover, I was flying Airlines PNG – no one would let me in.

Boarding was done via the same door, “Door A”, except rather than turning right to an even-numbered gate, I turned left to an odd-numbered gate. NAC, the National Airports Corporation of PNG, does love to keep things simple.

P2-MCL’s APU has temporarily been removed for repair, so for operational reasons (running the AC packs) engine number two was running on “disc”. A nicely loud boarding, indeed.

Ordinarily, when one boards a Dash-8 via the front door, one turns right and walks into the cabin. 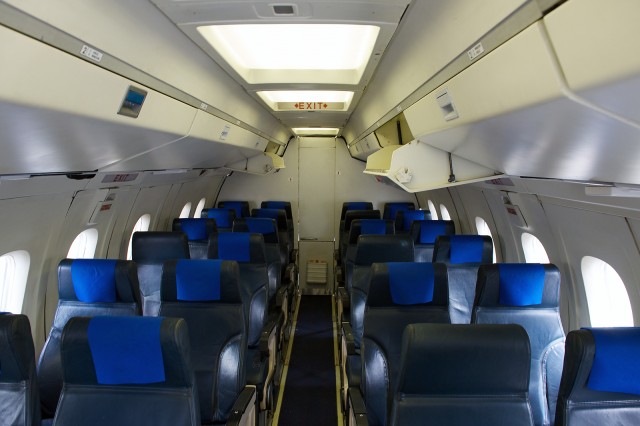 Not today.Â Today, I turned left.Â One could call it seat 0A — the jump seat.

Was it a comfortable seat? Surprisingly, yes! Does it have much leg room? Not as such, it’s still a Dash-8. Also, you only have back support when the door is closed, but who cares? You also even get a nice window to look back at the pax cabin through. 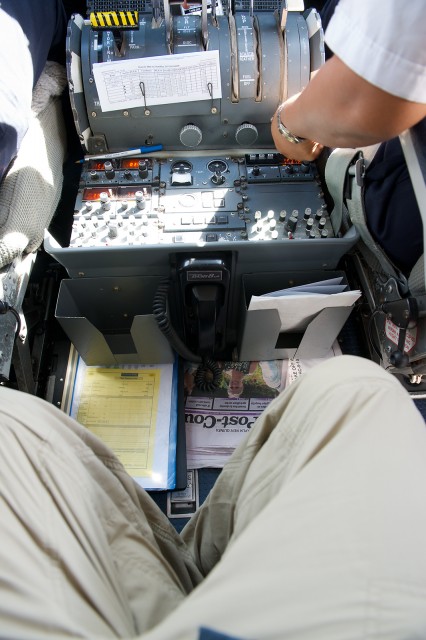 My favorite part about MSN 41’s flight deck was not the classic positioning of the weather radar, nor the single FMS that makes GPS approaches in it of questionable legality. It was the checklist holder.

My first demonstration of this was during start up. Only the number one engine required the full checklist, but it was still fun to observe the pilot monitoring physically sliding black plastic over the completed items. 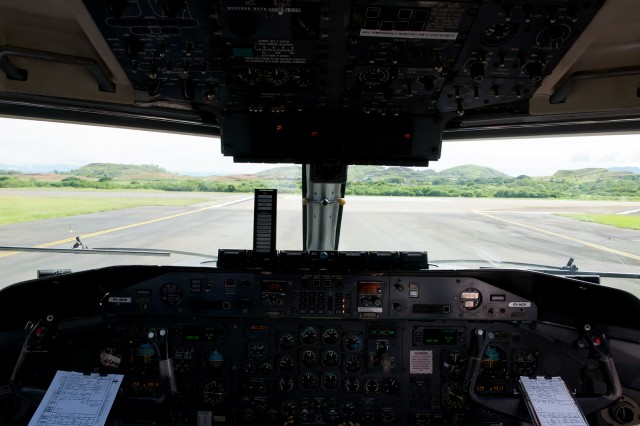 Taxi was brief, though we did have to hold for a few other Dashes to get airborne. That is one of the problems with POM, actually; it needs more taxiways. An airport of its size should not be so inefficient.

Once we were airborne, there was a quick ring on the little intra-aircraft phone. The captain, almost immediately, asked me if I would like anything to eat or drink. CG catering is pretty standardized, and I was not hungry – if anything, I was more thirsty than normal. I asked for a bottle of water. It was deftly delivered.

Unfortunately, most of the flight was through clouds. Not wispy high clouds or towering cumulous clouds, just endless, typical wet-season nimbostratus. It was not turbulent, just difficult on photographs. That is until we got to the final check-in point and commenced our descent into Goroka. 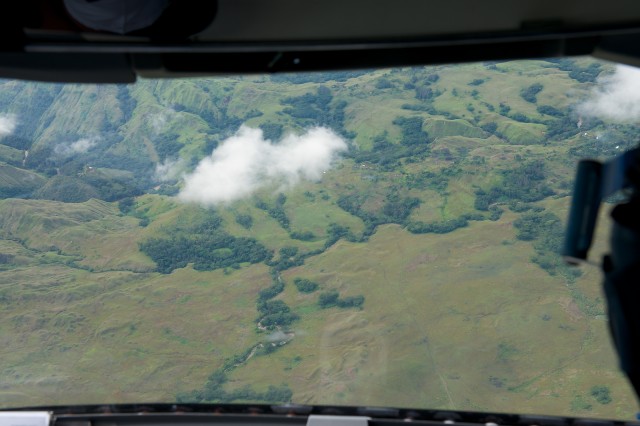 A view out the side window of P2-MCK. From here, you can see the PNG highlands. Photo: Bernie Leighton | AirlineReporter

Goroka is a town known for its coffee growing. From what I am told, the coffee is grown in Goroka and then, somehow, ends up at the processing plants in Lae, though I am probably dreadfully wrong about that.

Surprisingly, there was no crosswind into Goroka. I thought, for a moment, we had ended up in a different country or perhaps an alternate timeline. 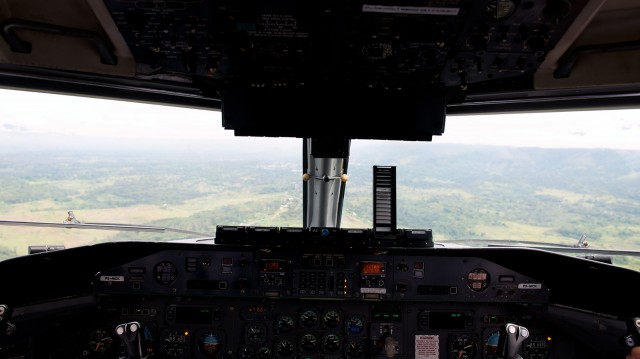 Upon our landing in Goroka, it was time for our half-hour turn. I used it as an opportunity to step out of the aircraft and grab some photos. 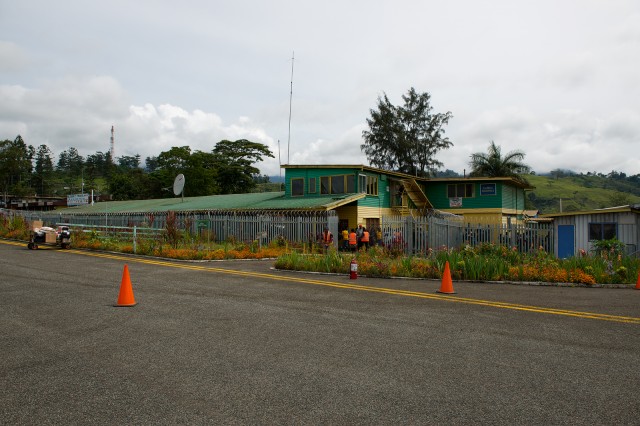 It’s not a busy airport, so the station manager was absolutely thrilled to see me out there. She told me she wished she had heard that I was coming in sooner. If she had, she would have had her extended family show up dressed in traditional highlands costume! See, everyone in PNG is extremely friendly – it’s still rather hard to believe. Imagine landing at an American airport and having the airline station manager come up to talk to you. It’d never happen. 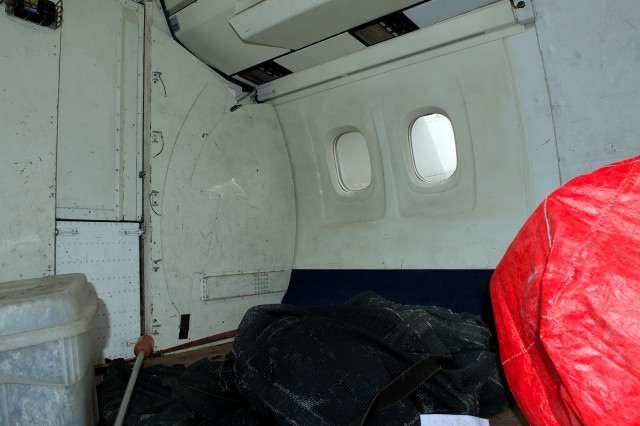 After she had to go back to her business, I wandered over to the cargo hold. I was shocked! CG has removed two rows of passenger seats to accomodate additional cargo. Then again, this is PNG – cargo is king!

Even with that fun, I had to get back into the aircraft before general boarding commenced.

The flight back to Port Moresby was much the same as the flight out. Having said that, we flew a slightly different track to stay within the minimum safe altitude at all time. 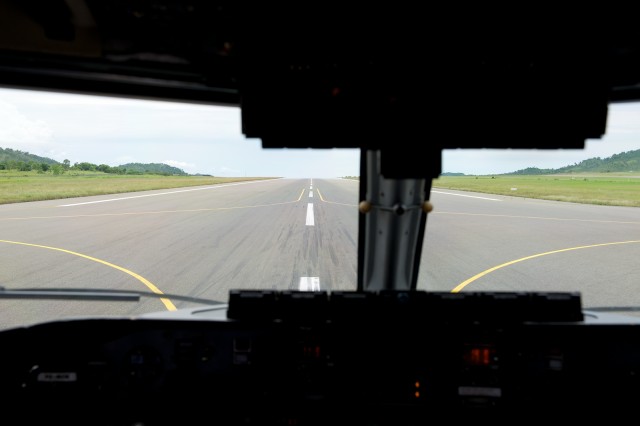 Touching down on the runway back at POM – Photo: Bernie Leighton | AirlineReporter

There’s only so many polite ways to describe how awesome a jump seat ride is.

With that, I would like to extend a huge thank you to Airlines PNG for making this possible. It was an amazing experience to fly on one of the oldest Dash-8s still in service, and an epic experience to see more of PNG.

https://www.airlinereporter.com
The Last DC-10: Part 2 – Flying from Kuwait to Birmingham
VIDEO: How Does a Small Plane Pick Up an Ad Banner?
4 Comments

What a neat story. Very cool pictures – I can only imagine what the scenery actually looked like.

Me too! The tropical cloud was not much to look at.

Great job Bernie….as in nice article and you HAVE a GREAT job 😉

I really enjoy reading your articles and looking at your pictures, also on your Flickr account. Great job