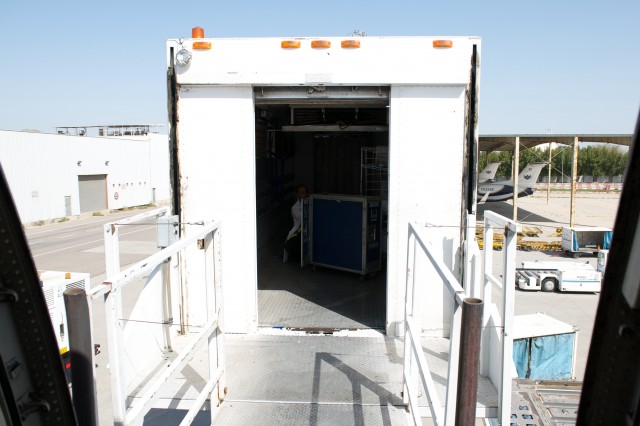 Refueling was also much slower than expected. It is only a 2,978 mile flight to Birmingham (BHX) from Kuwait City, and even with strongish headwinds over some of Europe, I’d estimate the actual “distance” to have been only about 3200 miles. People on the aircraft familiar with refueling assumed that even though on a DC-10-30 that is about 19.5 thousand gallons of Jet-A, it should have only taken about half an hour. One and a half hours later, we were still on the ramp in Kuwait, gazing upon curiously-registered freighters and Syrian A320s.

It’s not that the aircraft was heating up – the AC packs were running from the ground power cart. I just wanted to get airborne so we’d arrive into Birmingham before darkness fell. I was concerned for the Northern England spotting community, and also desperately wanting to collapse into an actual bed!

The DC-10 was starting to take its toll on me, even though I had spent most of the flight to Kuwait standing. I was so dry I’d consumed at least half a gallon of water. My eyes felt like sandpaper. Did I want to continue to fly on? No question! I was just becoming a little too aware of the physical affects it was having on me.

Start up, again, was via the ground power cart. This one was a much more modern (self-propelled) version. In its much more reliable and modern state, it supplied air to the number one engine in a much shorter period of time. Thankfully, this did not make things any quieter. Once again, start up went in order of engines, not “wings first, tail last.”

As if to prolong our time in Kuwait even further, we taxied to the other parallel runway. Finally, after what felt like eons of taxi, we were lined up and ready to depart towards the south. 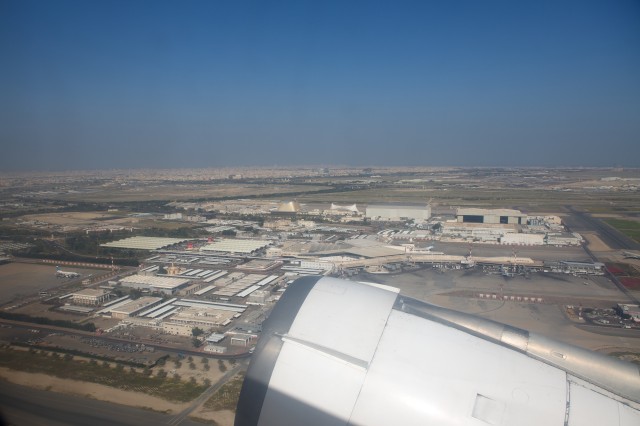 Taking off with a good view of the Kuwait International Airport terminal – Photo: Bernie Leighton | AirlineReporter

The takeoff roll was about 500 feet longer than out of Dhaka, probably due to heat, or perhaps to save the precious engine life; those GE CF-6s are still extremely valuable on the parts market, which is where they’ve destined after these flights. Somewhere over the Arabian Gulf, we turned northbound for Bazra, then Bulgaria some time later. During ascent I was also enjoying an extremely alarming howl from the AC packs.

Over Mosul, it was time for our second lunch. 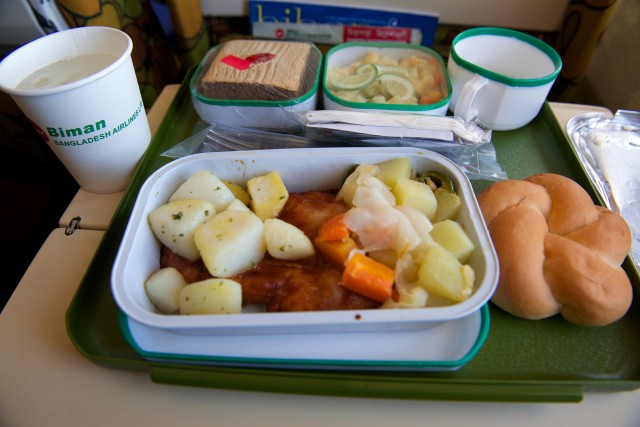 This time, starving, I opted for a few items. None of them were particularly photogenic, so I will merely provide a photo of the tandoori chicken and potatoes. It was delicious, so too was the vegetable and mutton biryani! Biman certainly knows how to cater.

I spent most of the first half of this flight attempting to hunt the quirks of a very old aircraft. 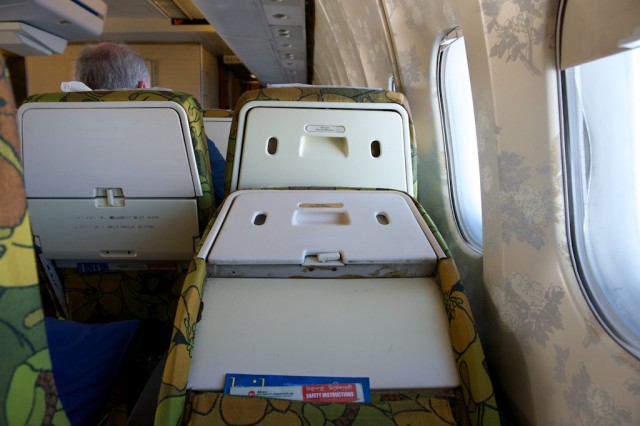 Seat 17J shouldn’t be able to do that – Photo: Bernie Leighton | AirlineReporter

Some of the seats had the ability to bend forwards. Unlike 1960’s Russian aircraft, this is not a design feature. I also noticed that the cabin was full of mold, and the PSUs were separating from the cabin insulation. The aircraft definitely showed the signs of a long service life.

The galleys were well kept, as was the flight deck, and the lavs were clean. The seats were another story. Let’s just say the floral print hides the stains at a distance. 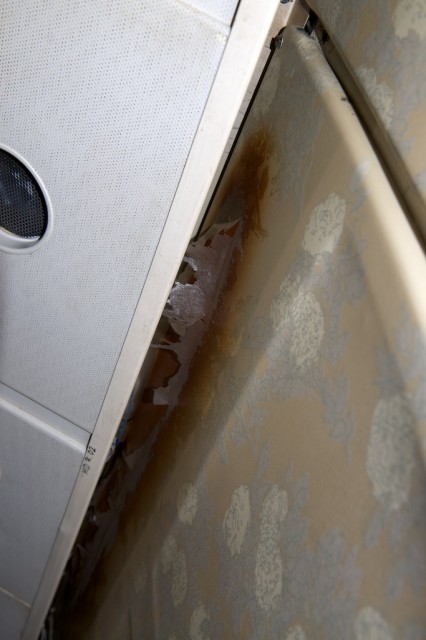 They were, in fact, so dirty that I still worry about the passengers who used the rows of five seats as makeshift beds. Maybe this is a coincidence, but one of my friends aboard the plane who did exactly that had to miss the actual final DC-10 flight, as he had found himself in the hospital with some mystery disease!

In all honesty, though, I’ve flown on 61-year-old ConvairsÂ thatÂ were in perfect shape and looked fresh off the line. Then again, I suppose none of them were used for 22,000 cycles. It is probably an apples and oranges sort of thing. 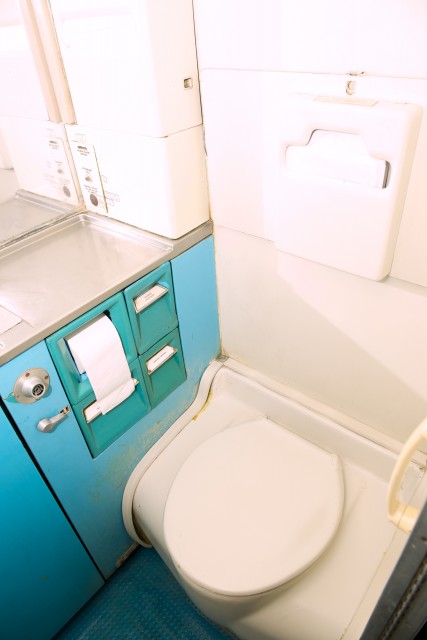 Once again, after lunch, there was the alarming smell of cigarette smoke. I am not directly saying the pilots were smoking, but it sure had that distinctive smell. I’d have said that in ten years their 77Ws would be odorous, dirty, and knackered, but Kevin Steele (BG CEO) is a miracle worker who can twist any arm and chip away any board of director wall. I have the utmost faith that he can keep turning Biman around and make it a truly world-class south Asian airline.

I’ve never been scared to fly on a vintage airliner, but this was the longest time I had ever spent on an aircraft this old. Airframers and cabin designers have come a very, very, long way since the 1970s in terms of making an aircraft a pleasure to fly on. 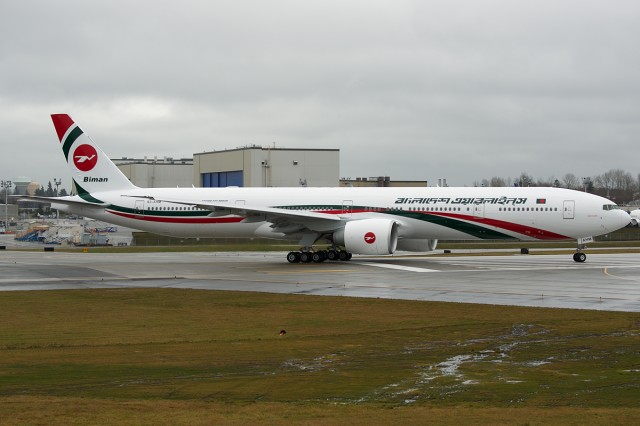 S2-AHM, the most recent 77W for BG, has a bright future ahead of it – Photo: Bernie Leighton | AirlineReporter

There was a distinct air of sadness amongst the passengers. This was the last long-haul DC-10 flight ever and the aircraft wasn’t even going to a museum!

Somewhere east of Armenia, I decided I should probably take a nap. Too scared to lie down, but with extremely tight pitch, I am not sure if I really slept, or just pretended to sleep. Â I did drink another half gallon of water throughout the flight.

As the sun set, we began our descent somewhere over either the Netherlands or the English Channel. With no GPS, moving map, or IFE, I really cannot be certain. Either way, it was getting too dark to take good photographs. I resorted to my phone to take a couple of shots.

We were promised a water cannon salute upon landing, however, that was contingent on arriving before darkness. We failed that. Some people got some amazing panning shots of our arrival. Almost wish I had been there to take one, but happier to be on the plane!

Upon disembarkation in BHX, I took some pictures of the aircraft in the freezing cold, breezed through customs, and went to sleep.

Ordinarily, this is where I finish my adventures, but this was not TECHNICALLY the last passenger DC-10 flight. That would come four days later. 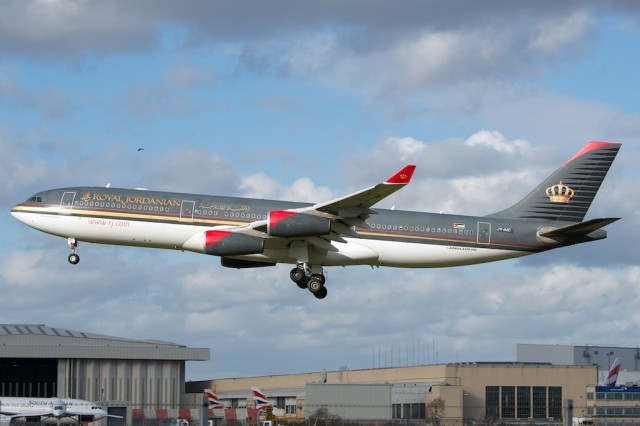 The next day, I entertained myself by hanging out with the local spotting community, who were gracious enough to take me to see how it was done at LHR. Much the same for Saturday, except Biman had begun to operate its DC-10 sightseeing flights. Sales of that, I am told, started slowly, but they soon ramped up.

Indeed, I know some of the originally empty flights filled up whilst I was on my way here. Instead of burning money to fly around Scotland on an aircraft I’d just spent 15 hours with, I decided to save the last DC-10 experience I may ever have, for the last DC-10 passenger experience ever. 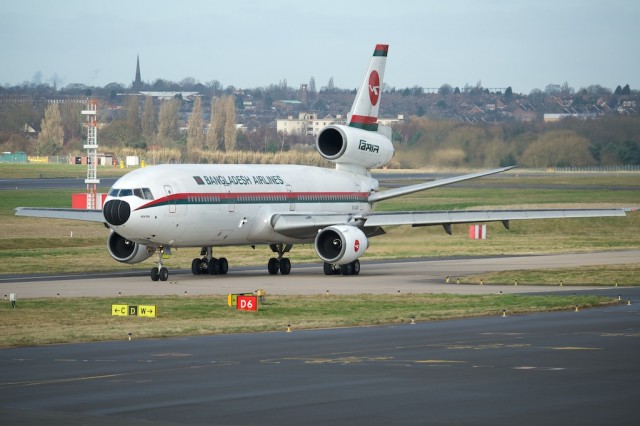 I spent the day standing on carparks taking photos of the DC-10 in the best light it will ever see in metro BHX. For whatever reason, other than the very first sightseeing flight, the Mode-S transponder was turned off. It was impossible to see on FlightRadar24. This caused some close calls in actually getting photographs of it, as for much of the day, I was elsewhere. 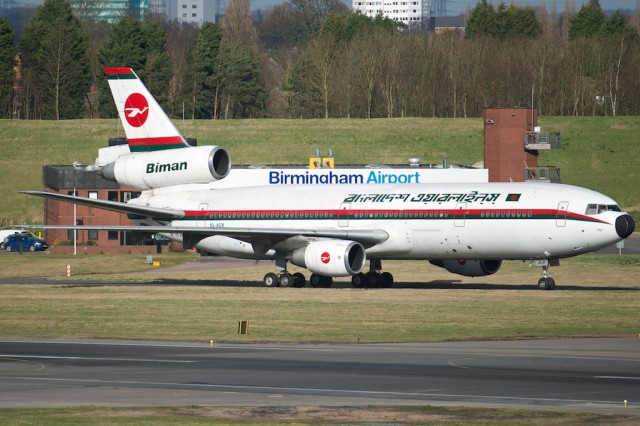 S2-ACR leaving no ambiguity of where it is – Photo: Bernie Leighton | AirlineReporter

Overall, I really enjoyed the West Midlands. There were plenty of aircraft to see, and numerous munitions from which to war nerd over. Bangladeshi curry is also quite popular here.

Monday morning, more Americans showed up.Â I would meet them for lunch and to capture the arrival of the noon departure’s return, and then fly on S2-ACR one last time.

Biman had quite the celebration planned! I will share what this looked liked in my third and final DC-10 installment, which will be published later this week…

She looks so splendid from the outside – such magnificent shot of a beautiful aircraft – slightly scary on the inside though! Cant wait for the last installment!

Great photos and report, reminds me of when I flew on S2-ACO ‘City of Shah Makhdom’ from Dhaka-Dubai-LHR. Was already planning to go to England so rather than just a joyride I was able to get from A-B on the big 10.
I was really hoping one of the Biman machines would get saved, rarer than rare to get a jet to last so long and be so original inside, though a few hours of the best cleaning agents might have been a good idea!
Paul,
Dunedin, New Zealand.