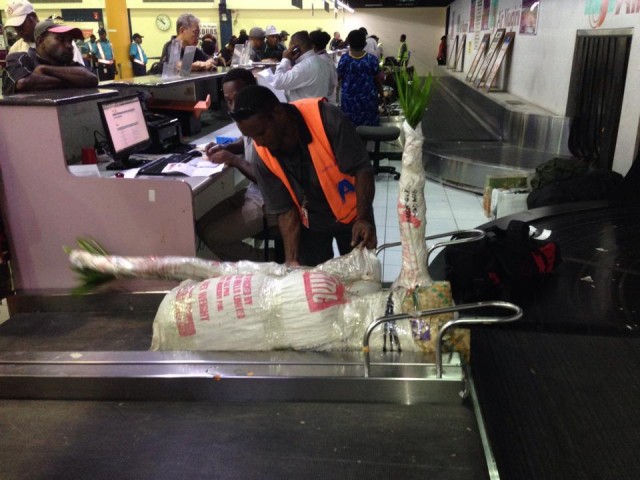 Domestic security is fast; after all, you’ve already cleared one layer. Get some random scribbles on your boarding pass to mimic the TSA, and head to the departures hall. It has, well, it has sort of a cafe and what some may describe as racist mobile phone advertising. Then again, the people of the PNG Highlands are extremely proud of their heritage, so I think it is just foreign over-sensitivity sparking any controversy. 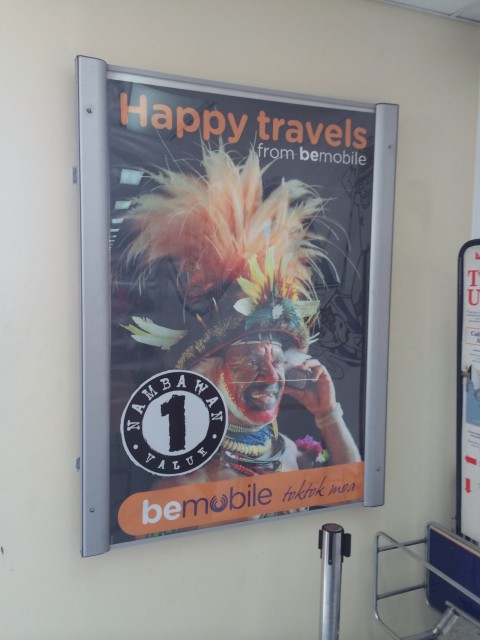 This is how mobile phones are advertised in PNG… Photo: Bernie Leighton | AirlineReporter

Boarding is done via walking through a walkway – covered, thankfully. It even had plenty of holes in the screens to allow some quick photos to be taken — something I always appreciate.

Air stairs were a given. It’s a Bombardier Q400 outside of Canada! 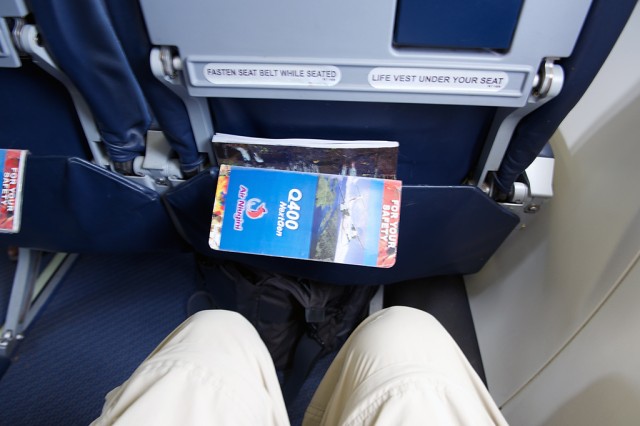 The legroom on seat 3A of a PX Q400 NextGen – Photo: Bernie Leighton | AirlineReporter

I was surprised that Air Niugini has equipped their Q400s with a business class cabin. It is variable depending on the aircraft, but this one had eight seats, identical to those in economy, but with larger pitch and different seat covers. Furthermore, only half of those eight seats are sold and hot meals are served. I was also surprised to see that PX has opted for two lavs aboard their Q400s.

Again, if I had known, I probably would’ve booked business class. PX is an airline that actually understands the concept of value. The hot meal up the front smelled excellent. 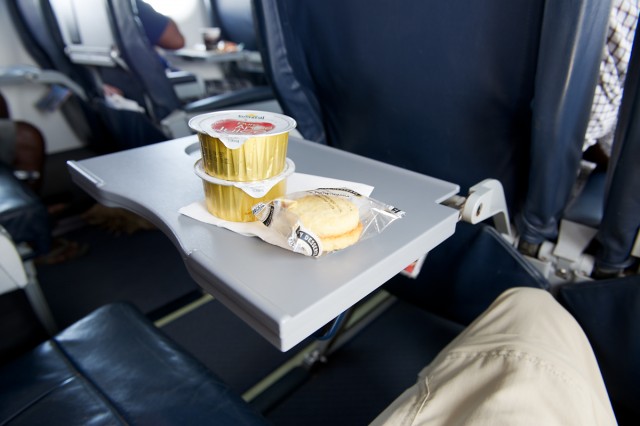 Take off out of Moresby was exciting; it didn’t include a backtrack, but I later found out it was almost necessary.

Navigation on domestic flights within PNG is all procedural. There is one primary Air Search Radar on a hill adjacent to Jacksons International Airport. On the Australia-facing side (towards the south) it has a range of 120 miles. To the north, it is nothing but mountains. Some of these mountains are in excess of 15,000 feet tall. The pilots are not sure if the search radar even offers a valid scan in that direction, but if it does, it doesn’t extend too far past sixty miles.

You do not want to crash here. Well, you don’t want to crash anywhere, but crashing here is worse. Search and rescue (SAR) is done by private companies and the Australians. It is unclear whether or not the PNG defense force Air Wing is actually operational at the moment. I know that they do use two hevilift chartered helicopters, but am unclear if they are used for SAR.

BONUS: In-Flight Review of Westjet Encore: On Board Their Newest Q400

If that was not enough, one must remember that all of Papua New Guinea exists within the Intercontinental Convergence Zone or as some refer to it, the ITCZ. In practical terms, the ITCZ is a line of constantly building and collapsing thunderstorms that traverse the equator. This means you can expect a good deal of convection. It would probably be a smooth flight, at least early in the afternoon above 30,000 feet. But where’s the fun in that?

My ride that day was P2-PXS, one of PX’s newest (of six) Q400s. They are all marketed as NextGen – this one most certainly was, but the ex-FlyBe/SAS ones are not. Another thing of note is that because of the procedural navigation rules, the second alternate airport for diversions is always back to POM. 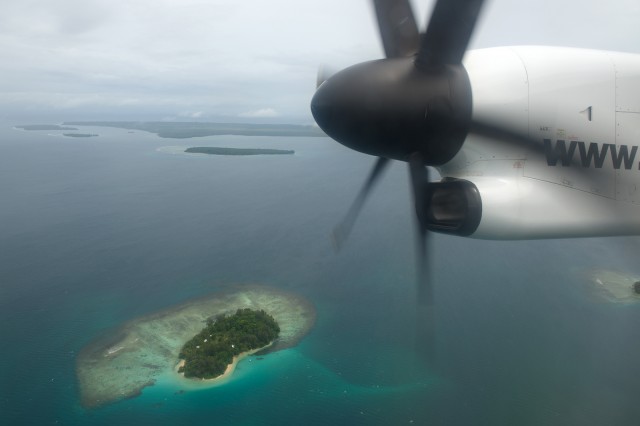 The first hour and twenty minutes of the flight to Kavieng, New Ireland, was perfectly smooth. The last twenty minutes were met by what the captain described as “some weather.”

I was expecting the worst – I had my barf bag at the ready, even. But no, I’ve had much worse flights flying over the Rocky Mountains in the same aircraft. It was just annoying. Slightly scary as Kavieng has no precision approach equipment, but things were definitely VFR once we descended below the cloud deck. 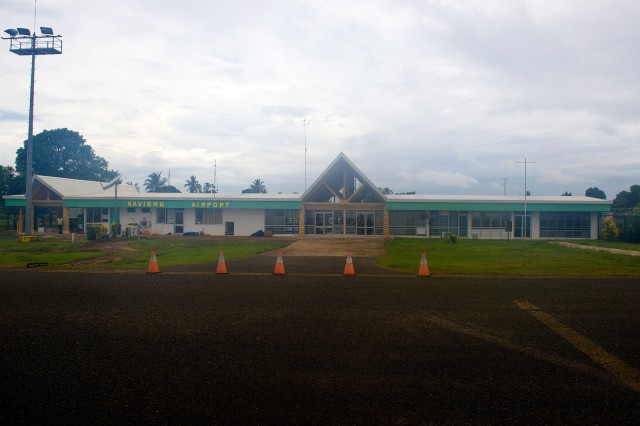 Kavieng itself was an airstrip built by the Japanese after their conquest of New Ireland. Until a few years ago, the runway was 100% vintage Japanese construction. Sadly, but probably for the best, it has since been resurfaced. For high altitude navigation assistance, Kavieng does have a VOR installation. Â I was legitimately surprised to see one, as it was almost equal in size to the terminal.

Kavieng, apparently, is where one goes in PNG not just for wreck diving, but also for extremely high-end surfing. It is no surprise that the only other foreigners on the flight were checking in surfboards ahead of us.

BONUS:Â My Review- Flying Porter Airlines From Toronto to Montreal and Back

Regardless, on landing into Kavieng I made the mistake of going to the lav. The lav was clean, fine, and spacious. The mistake was that while I had been in the lav- my friend had snuck his way up the front and began speaking with the flight crew. It would, then, turn out that he had been moved into the flight deck – so I reckon his experience on KVG-RAB is going to be a lot more interesting than mine.

So interesting, in fact, that I shall cede the remainder of this segment, to him…Â Well, at least in terms of photographs.

The slightly backwards heading 35 minute flight was not to Rabaul. That airport was destroyed by a triple-volcano eruption in 1994. Our flight, technically, was to Tokua airport- near the town of Kokopo. For some reason, people still refer to it as Rabaul- even though Rabaul is a 40 minute drive south. 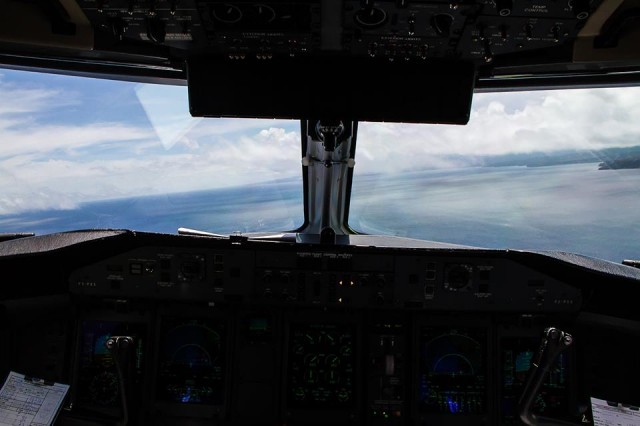 The front office view of the Bismarck Sea. Photo by Jacob Pfleger.

Regardless, the flight down went very quickly and was quite smooth. Unknown to me at the time, it was because of our skilled flight crew dodging the storms as they popped up on the weather radar. 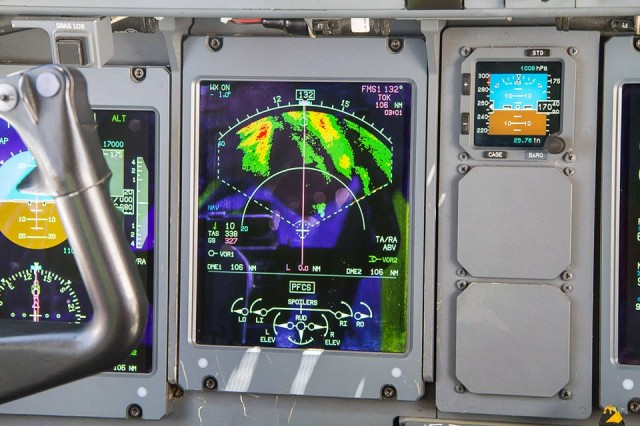 Unfortunately, due to the cloud there was not much of a view on descent. At least, such was the case for me. 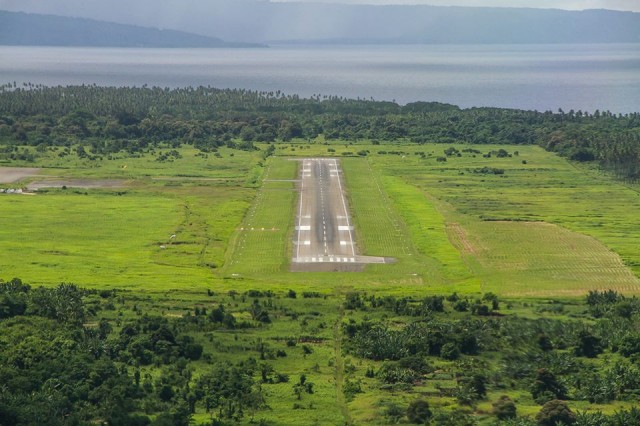 As it always seems to be with PNG runway layouts, there was a slight crosswind on touch down. You can probably see it better from Jacob’s photographs. 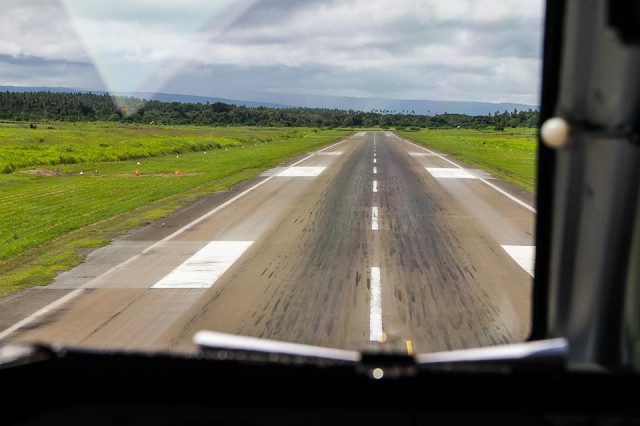 Flaring over runway 28 at Tokua airport. Photo by Jacob Pfleger.

Overall, Air Niugini offers some of the best- if not the best- Dash 8 product out there. They know how to cater to their customers, and crew. Fun fact. PX Dash flight crew are the highest paid in the world! 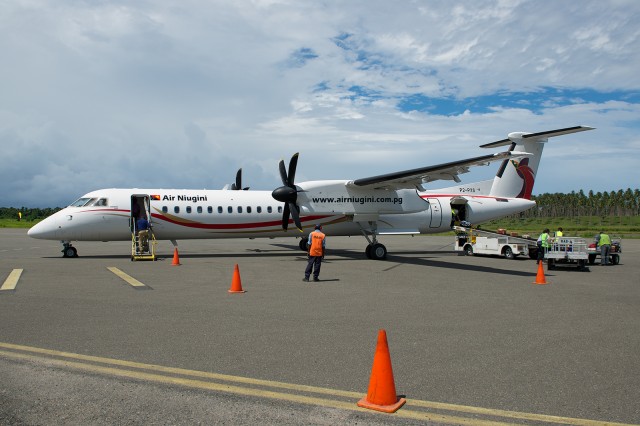 Bernie, hats off to you man. You are the International Man of Mystery, Anthony Bourdain, and the Dos Equis guy rolled into one helluva bat shit crazy #AvGeek blogger. There’s an A319 flight to Antactica with your name on it. Great story!

There is also an IL-76 to the same continent! Both of those are on the list of “things I need to fly on”.

Great post! Quick question though – what does this mean: “it didnâ€™t include a backtrack, but I later found out it was almost necessary?” Thanks.

Oh, well, POM only has two runway entrances/exits- one of which is well before the threshold. Hence, to attain the full length of the runway to attain a safe takeoff- you may have to backtrack. As in taxiing to the end of the runway and executing a 180 degree turn.

Does that clear things up?

where every street was a mix of old and new, there were plenty of travel options for everyone; and the people I met were always willing to help.
For more info visit: disabled travel