A crashed A6M2 Reisen on display at a museum in Kokopo – Photo: Bernie Leighton | AirlineReporter

This is part of a series about visiting Papua New Guinea. Â In part one, Bernie reviewed flying Air Niugini. Â In part two, he visited (New) Ireland and (New) Britain via a Q400. Â This is part three of four.

There are a lot of things that one can do in New Britain that are typically tourist. You can go to the golf club. There are beaches everywhere. Local markets that aren’t even designed to rip off tourists. Reasonably warm ocean. Think of it like Hawaii before it became a commercialized tourist haven.

The thing is, that kind of tourism bores me. I would not have flown all the way around the world just to go see a new beach. I was actually there because I wanted to see the leftovers from Operation Cartwheel. 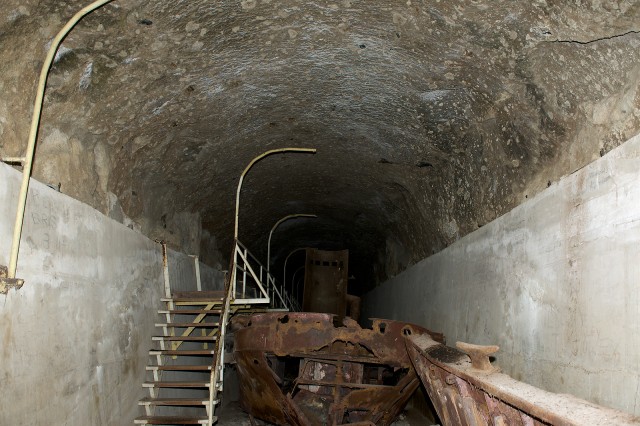 One of the barge tunnels the Japanese dug into the New Britain mountains to hide ships – Photo: Bernie Leighton | AirlineReporter

Operation Cartwheel was the Allied reconquest of the islands along the Bismarck Sea. Though technically the main battle and landing was at Cape Gloucester (towards the southern part of the island of New Britain) there is not too much to see there. There’s a beach, but neither the Americans nor the Japanese left much behind. Probably because the main Japanese garrison was closer to the town of Rabaul. Well, originally it was an Australian garrison – but the Japanese took what existed and dug in.

Dug in, in this case, does not refer to sandbags and temporary emplacements. It literally means digging into the volcanic mountains to build permanent emplacements to house material and other military installations.

They even went so far as to dig a submarine base into the side of the mountain, but it’s a challenge to take photographs of. I’ve seen it, though – you do have to walk a fair way through a series of tide pools – but eventually the opening is there. 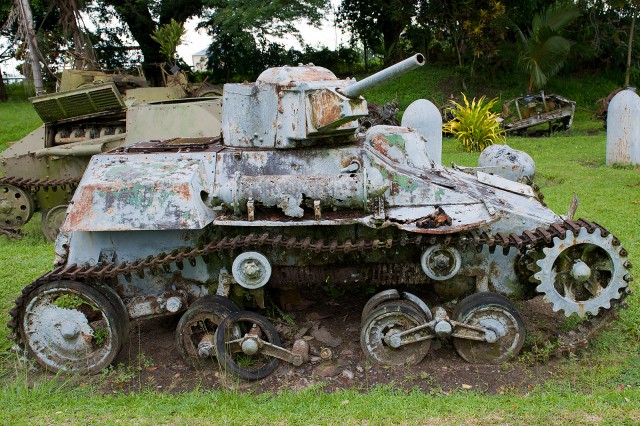 What appears to be the remains of a Type 98 Ke-Ni tank – Photo: Bernie Leighton | AirlineReporter

On top of the blown-up or abandoned tanks, naval guns, fortresses, and bunkers, one can also take a drive down to the old town of Rabaul. I was told, on said drive, that we would get to see the old Rabaul airport. It, too, was originally carved out of the jungle by the Japanese. 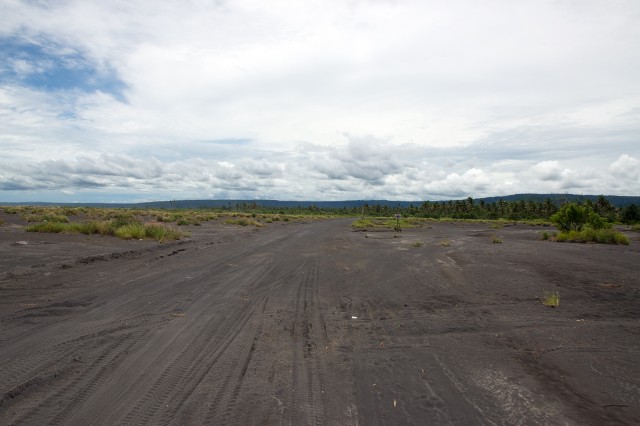 The old Japanese-built Rabaul airport was destroyed in 1994 when the Rabaul Caldera erupted out of three separate volcanoes. Photo: Bernie Leighton | AirlineReporter

Unfortunately, the old Rabaul airport was much closer to the base of Tavurvur than I had imagined. Somewhere, probably under about ten feet of ash and pyroclastic mud, there’s got to be an airport down there. Apparently, in the above photograph, I was actually standing on the runway.

Enough of that though. I was getting bored, and I didn’t even manage to find any novel species of local rat! (I was told by zoologists that there might be at least three unclassified species of rat on the island of New Britain.) It is not that I didn’t love my time in Kokopo, I just was starting to get rather airplane deficient. 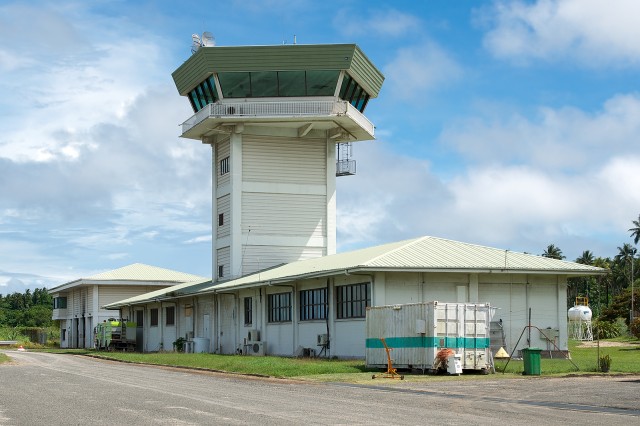 Thankfully, that was the day I was supposed to go back to POM.

Before boarding my flight, though, I decided to see if I could get into the control tower of one of few controlled air fields in PNG. I didn’t expect all it would take would be a smile and a business card, but it is not exactly like Tokua is a dangerous place. I also think that the men in the tower were probably in need of a change of pace. 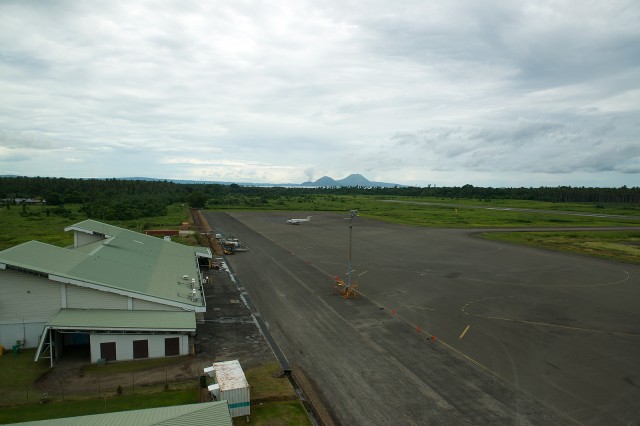 The entire airport was built by the Japanese as part of an aid package after the 1994 eruption took out their last construction effort in the town of Rabual. Tokua, however, was also a construction project with a fifty-year hiatus in between runway/ramp construction and the completion of the terminal. They just unfroze the funds after the volcano, so to speak. 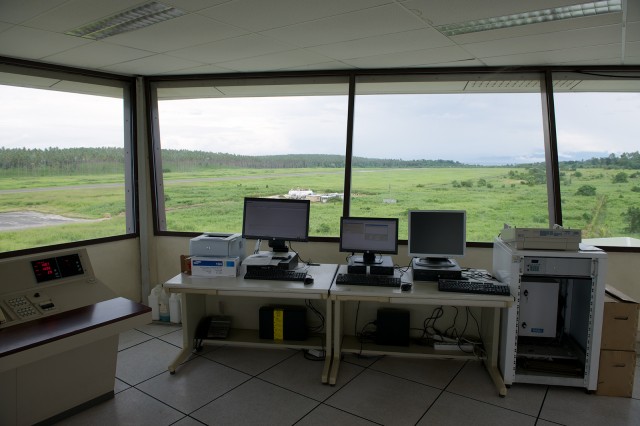 View of the Tokua Airport fuel dump to the right side of the control tower – Photo: Bernie Leighton | AirlineReporter

The tower cab is massive; I suppose it was overbuilt “just in case”. There is a backup generator that is on almost all the time. Kokopo had 15,000 blackouts in 2013 – that’s not a typo.

Unfortunately, when not running on main power, only one air conditioning unit works, so it is only slightly below solar temperatures. A nice respite from outside, but not what I had hoped.

The tower cab itself was a replacement for a portable unit donated by the Germans. That tower is now established at the Highlands town of Goroka. 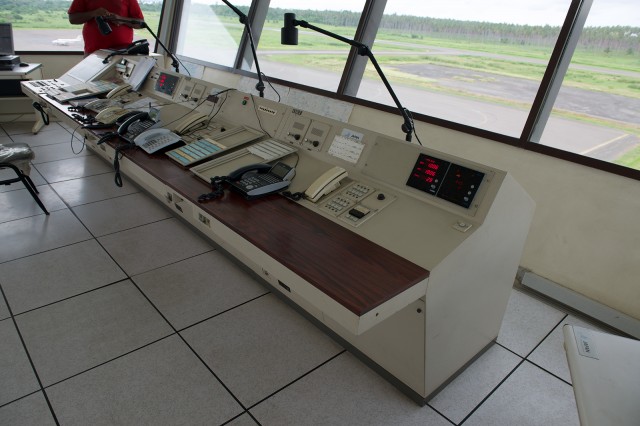 The staff in Tokua tower are all not only trained by Air Services PNG, but also go on exchange with their New Zealand counterpart. It also seems that, unlike everywhere else in the world, it is not a stressful job. 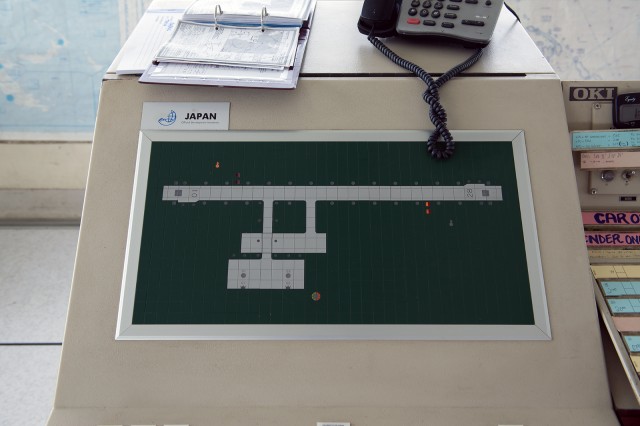 While I was in the tower, I got to witness the “afternoon rush” take place. There were four arrivals. The first was a Dash-8-100 from a mine near Buka. Unlike the remainder of the traffic, they came in on runway 28. 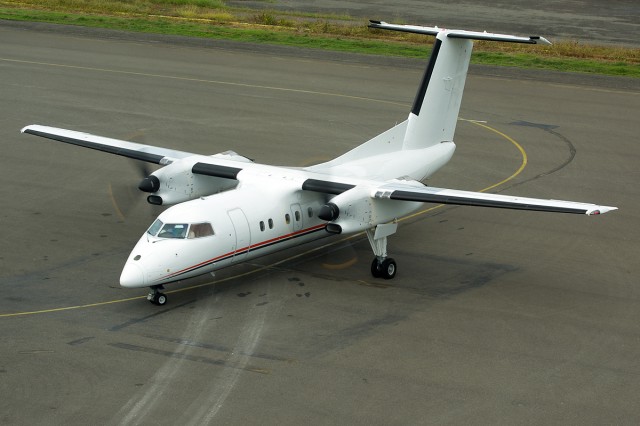 P2-NAX, a Dash-8 on a mining charter, coming in from the island of Bouganville – Photo: Bernie Leighton | AirlineReporter

The next arrival was more interesting, as the winds had decided to favor runway 10. Runway 10, it would turn out, did not have its PAPI turned on. This was of no concern to the crew, but apparently their procedures demanded they ask.

This sparked some furtive radio calls from the cab to get them turned on for the next arrival — not to worry, they were. 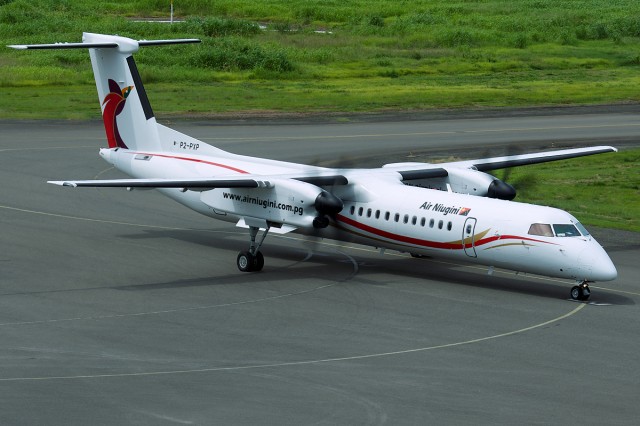 After being told that P2-TAH was a Fokker 50 by the solitary controller, we decided to stay up in the tower a few extra minutes to catch it. At the time, my friend and I both thought our flight would depart on time. 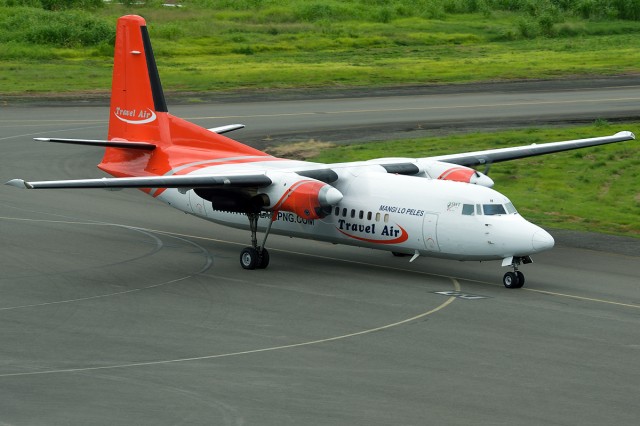 Little did we know that the power outages ripping through Kokopo had also managed to affect the passenger terminal. Due to an inability to generate computerized load sheets, our flight was delayed 25 minutes.

You get used to these things in PNG.

In the end, I would like to give a huge thank you to Air Services PNG for being so amazingly friendly and welcoming. No one else would let me do something so epic on such short notice. I learned a ton, and took some great photos. It would not have been possible without them!

The tank is actually a Type 97 Te-Ke tankette, not a Type 98 Ke-Ni. The Ke-Ni was never deployed beyond the Japanese home islands.