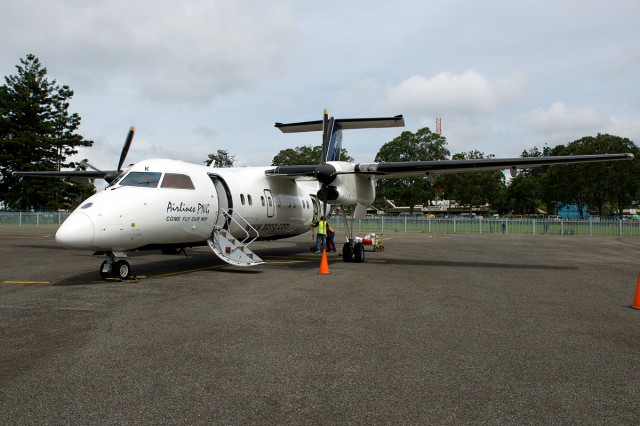 This is part of a series about visiting Papua New Guinea.  In part one, Bernie reviewed flying Air Niugini.  In part two, he visited (New) Ireland and (New) Britain via a Q400.  In part three, he checked out remnants of war and got a tower visit. This is the final installment.

I have now flown Air Niugini (airline code: PX) more than most Americans ever will. The thing is, no one I knew remotely well enough at the time worked for the airline, which is rare for me. I did, however, know plenty of people who work for their fiercest competitor – Airlines PNG (airline code: CG).  Clearly, something I needed to take a flight!

So, you’re dumb enough to decide you want to go to Port Moresby on holiday? Well, first off, you are pretty dumb. Do you know how dangerous Port Moresby is? The American government clearly knows; they’re building a new fortress-embassy on the highway to the airport. This embassy construction site also houses all its workers behind three 20-foot high fences and a small contingent of Marines. Having said that, it is still safer than Lae! So, if you have to pick between the two…

It’s not an organized sort of crime, or resistance. It’s something more like a zombie movie. One target sees an opportunity and then, almost like a wave, the rest follows. From what I’ve seen, cricket bats are a popular weapon of late.

I suppose muggings and general mischief do take the edge off after the national pastime, chewing buai, was banned this year. Not that the other three activities were not popular before- they’re just all rather hard to do with a buai, and some mustard, turning your teeth and saliva bright red!

It is the most bizarre dichotomy, because at the same time, I have never met any people more welcoming, helpful, and friendly as the general Melanesians in the very same place.