In October, we gave our $.02 on the Delta expansion in Seattle, home base of “partner” Alaska Airlines.  Delta had announced new service on a number of routes that Alaska was already serving.  In theory, this was to feed Delta’s growing international gateway from Seattle.  We opined that it was possible Delta and Alaska were going to start playing hardball.  A couple of days later, news broke that Delta pulled the plug on providing ground services at some Alaska remote stations.   Things haven’t gotten much better in the meantime.

This past week, Delta announced a further expansion in Seattle, launching flights to Vancouver (5x daily) and seasonal service to Fairbanks, Alaska (you can guess who also flies there).  Delta and Alaska are now competing on ten routes out of Seattle. 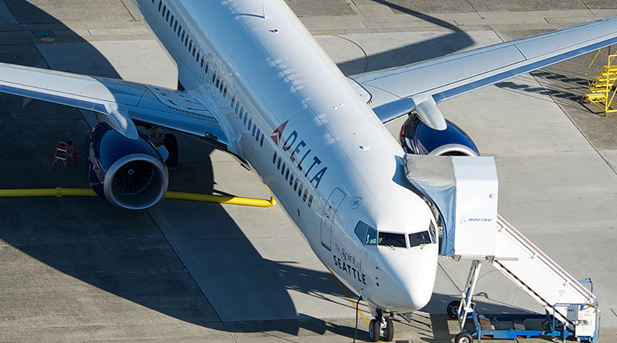 Last week, Delta unveiled their newest special aircraft, a Boeing 737-900ER named the Spirit of Seattle.  This is a big deal, because it is rare for Delta to do any sort of special livery. But it seems that Seattle is special enough.

“For 80 years, our customers, employees and partners in Seattle have embraced Delta, and our growth here would not be possible without them,” said Mike Medeiros, Delta’s vice president ’“ Seattle. “The Spirit of Seattle aircraft will proudly bear its name as it travels around the country as a representation of Delta’s history in Seattle and a sign of our thanks and commitment to our future here.”  Delta also points out that they’ve spent $14 million enhancing their passenger facilities in Seattle. 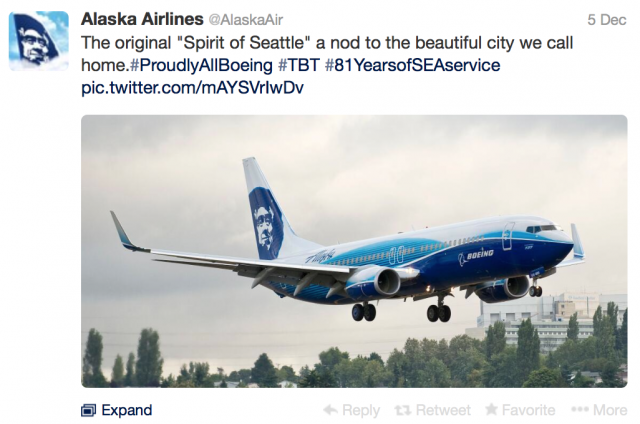 Alaska (@alaskaair) took to Twitter to respond to Delta’s Spirit of Seattle announcement.

If the “Spirit of Seattle” name sounds familiar, it should; Alaska Airlines has been flying a special livery under that name for five years.  Having grown up in Washington State, and lived in Seattle for a number of years, I can tell you that Alaska is definitely considered their “hometown” airline.  It’s also very interesting to note that Delta only has one other “Sprit of” plane – and that’s a 777 for Atlanta, their home base.

After Delta’s announcement of their new plane, Alaska took to Twitter to respond, also pointing out that they had been flying from Seattle for 81 years, one more than Delta/Northwest. Burn.

Publicly, Alaska and Delta are still talking partnership (albeit in very polished PR-speak).  It is hard to know the discussions that are happening behind closed doors.

Maybe this is not just Delta looking to attack Alaska head-on, but they are looking to their own future. You have the world’s (formerly, as of this morning) largest airline looking to build up a hub in Seattle and previously they have relied on Alaska to help push traffic into Seattle. When building such an important hub, it doesn’t make sense to rely on another airline for your future. What if Alaska got bought out? What if their agreement ended? The moves that Delta has been taking make some sense, but so does Alaska’s reaction.

What’s the next move? We are not sure, but we sure will be watching.

Flying with Honeywell Aerospace’s Crash Test Dummies on a Convair
Flying Onboard the A321 – Does it Make a Good 757 Replacement?
9 Comments

Where is the Alaska Airlines “Spirit of ‘Delta Sucks'” livery? 😀

Partnership or slug-fest? Delta has very deep pockets. I wonder if part of their unspoken plan is to eventually own Alaska, one way or another. Stranger things have happened. If so, I’d bet that DOJ would have a very close look at the plan, for more than their bit of ‘forget-me-not’ blustering over the American merger. Let’s revisit this in nine months.

It should be noted that Delta technically has two other Spirit planes, the Spirit of Delta which is currently at the Museum and the Delta Spirit, N701DN.

Yes, technically N102DA “Spirit of Delta” is still on the register. Customers in the PNW are very protective of their local brands. AS has defended themselves against encroachments from other major airlines including SWA. I hope to see Alaska Airlines do this again as they are a great place to work. If Delta were to take over AS, I believe you would see them “right size” the operation at Sea Tac and concentrate on high yield business routes. It would definitely shrink the operation or split it with SLC.

When I was growing up in the Seattle area, Northwest Orient Airlines had a fairly large presence at Sea-Tac (and probably as NWA after it merged with Republic). At its peak, how many daily international and domestic flights did it have at Sea-Tac? And how does that compare to Delta’s current plans?

@Ryan – I’m not sure about NWAs x-SEA operations; I do know they used to have a large presence in Seattle as I used to frequently fly them back-and-forth between DTW as a child.

@Ryan – This 1985 route map is a good reference (http://airlinetimetables.blogspot.com/search/label/Northwest), though I wouldn’t say it was their “peak”.

@No Fly Zone – Alaska also has deep pockets, deeper than most realize.

Alaska defends territory better than any carrier. Their responses are methodical and not erratic. Look at BLI ops vs Allegiant. Over the years, Southwest has even reduced some PacNW flying. Add Virgin and jetBlue as recent examples, and Alaska has not skipped a beat.

P.S. where is the profile image sourced from on this site?

We know what it takes to land that job. Our founder flies full time as an international 747-400 pilot. Our Chief of Military Transition Division is a retired military pilot who is a full time captain at a civilian airline. In addition to this, seven AIRHEADPRO.com staff members are full time airline pilots. All members of our flight attendant division are currently flying full time with an airline. Let our experience help you! – See more at: http://www.airheadpro.com/about-airheadpro#sthash.JyPAOwKv.dpuf