This story was written by Chris Sloan and originally was published on Airchive.com. This is the next of a multi-part series talking about the Boeing 737 factory in Renton. Read the first part: A Historical Look at Boeing’s 737 Factory in Renton and second part: Inside Boeing’s 737 Renton Factory and the Successful Next Gen.

The Boeing 737 Goes Into ’œMAX’ Overdrive

The Boeing 737 NextGen order book continued to bulge, growing virtually unabated even through the deep worldwide economic slowdown / crisis of 2008-12. Ironically, this era of financial strife and sharply escalating fuel costs, as well as the growth of emerging markets, helped 737 and A320 sales go from strength to strength. Boeing however didn’t stand on it its laurels or did it?

Boeing claims with the introduction of its latest performance improvement package ’œPIP’, today’s NGs are 6-7 more efficient then when they were first introduced in the late 1990s. Boeing’s Tinseth points out that ’œThe (737) program has taken off with record sales. It’s simple. We make it better every time. We were first in its class with ETOPS 180, glass cockpits, Sky Interiors, and high bypass engines. We lower the operating costs through such new technologies as blended winglets, heads up display, carbon brakes, and more fuel-efficient engines. We enhance customer appeal with the new Sky Interior. This is an airplane that appeals to the heart of the market: emerging and developing economies and it is very successful with the LCC business model’. These new LCC airlines in emerging markets include Lion Air, Air Asia, and Gol! An unintended benefit of the weak economy, particularly in the U.S., is the poor financial results led to an elderly, fuel-in-efficient, maintenance intensive fleet which created an advantage and some say a bubble for airframe manufacturers, particularly in this sweet smart of the market. ’œThe significant driver in the US is the demand to replace older and less efficient aircraft’, said Tinseth.

Even though the A320 sales were outpacing the 737 in the mid-to-late 2000s, Airbus had not seriously updated the A320 family technology or engines since the type was first introduced nearly 25 years before. In January 2011, the European airframe maker launched the A320 neo ’œNew Engine Option’. Targeting a 2016 entry-into-service, Airbus claims the neo will offer 20% lower maintenance costs, an additional range of 500 miles, and burn 16% less fuel then the current A320.

Additional features include an updated cabin to compete with Boeing’s industry leading Sky Interior and their own winglets called ’œSharklets’ The market responded in droves. By the end of 2011, Airbus had received 1,196 firm orders for the A320neo family making it the fastest selling new commercial aircraft in history. A big blow came when American Airlines, who had been an all-Boeing customer for over 20 years ordered 130 A320s and A320neos in July 2011. This ominous event in Boeing’s view had as much with delivery positions as it did with price and technology. Airbus with 3 plants building A320 family aircraft and a 4th eventually in Mobile, could deliver single-aisle airplanes quicker then Boeing.

Other airlines such as Lion Air split their new fleet orders between the 737 and A320 which was previously virtually unheard of. This led to intense efforts to up the production rate at Renton with the production rate rising to 35 aircraft per month in December 2011. Simultaneously, Boeing faced the dilemma whether to develop an entirely a new design or build a fourth generation 737.

Computer mock up of what Alaska Airline’s Boeing 737 MAX will look like. Image from Boeing.

Taking it to the MAX

Boeing was evaluating a clean-sheet proposal called the Y-1 ’œProject Yellowstone’ that was rumored to even be a double-aisle airframe. Boeing’s Tinseth exclaims that not going forward with the new program was not about protecting one of Boeing’s biggest cash cows nor had the company become risk averse following the 787 issues: ’œThe clean sheet design was coming together from a tech perspective. The biggest challenge was the production system. It would take a long time to go from a green field to 38 aircraft per month and it would be tough to compete in this market. New engines from P&W and CFM led us to mitigate the risk. The composites and other vanguard technologies on the short-medium haul were not as compelling as they were on larger planes such as the 787. Other technologies would allow us to respond quicker in the market and upgrade this aircraft’.

Nearly a year after Airbus launched the neo and under pressure from customers, Boeing reached its decision. On August 30, 2011 launched the Boeing 737 MAX. The MAX will feature a larger diameter, more powerful and fuel-efficient engine the CFM International Leap-1B engine. A new type of wingtip device resembling a 3-way ’œV-shaped’ combination of a blended winglet, wingtip fence, and raked wingtip would provide a distinctive visual cue different then any aircraft before.

The new Advance Technology Winglet that will go on the Boeing 737 MAX. Photo by David Parker Brown.

Boeing claims the new engines, winglet, and other aerodynamic changes will contribute to an a 16% lower fuel burn than the current Airbus A320, and 4% lower than the Airbus A320neo. This is a claim naturally disputed by the Toulouse airframe-maker. As for a further up gage of the 737 to replace the hole in the market vacated by the 757? According to Tinseth, ’œWe’re on the edge of where we can go with the 737 MAX 9. The 757 territory is filled on the low-end by the 737-900 / MAX 9 and on the high-end by the 787-8’.

At the time of launch, American Airlines was the only disclosed customer. In December 2011, Boeing announced Southwest, who had launched the 2nd and 737NG would be the 737 MAX launch customer with a firm order of 150 aircraft and 150 options with an entry into service in 2017. Other major orders from United, AeroMexico, Virgin Australia, and Lion Air came flooding in and in 2012, the 737 surpassed the A320 neo for orders that year, though still lagged behind overall.

Like the 787 and 747-8, The MAX would depart from Boeing’s customary ’œdash nomenclature’ and become the 737 MAX 7, 8, and 9. Tinseth concedes that ’œWith the MAX we were second to the market, they had a head-start. We’ve had an opportunity to market and share it with the market, who has responded well. We have a decided value advantage with the MAX.’

In terms of history repeating itself, Renton was once again an ’œaviation boom town’ and the 737, a program once almost given up for dead, was the cash cow of the company, even exceeding the 777. Faced with the goal of ramping up NG production to 42 aircraft per month by mid-2014 and the assembly of the new MAX beginning in 2015 without disrupting current NG production, Boeing could have decamped for other U.S locations. Instead, the company decided to double down on Renton and add up to 1,000 new workers in the process, on top of the already 10,500 already employed there.

Line two in the Renton factory. Image by Chris Sloan.

Given the existing expertise and supply chain in the Pacific Northwest, more harmonious employer / labor relations, and incentives from the state of Washington. Renton is crucial to Boeing’s competitiveness as the sole location for 737 assembly. Its competitor Airbus has already stepped up production of the rival A320 jet family to 42 per month at its 3 final-assembly plants in Europe and China. Beginning in 2016 its newly under construction plant in Mobile, Alabama will give it additional capacity of up to 4 aircraft per month at lower labor rates then Europe. Boeing is clearly feeling the pressure. Erik Nelson, the Director of 737 Manufacturing, gave us an exclusive tour of a facility not open to the public to demonstrate how Boeing’s going to meet these challenges ’œcockpit’ on.

Boeing is in the process of making major changes to the production site including: 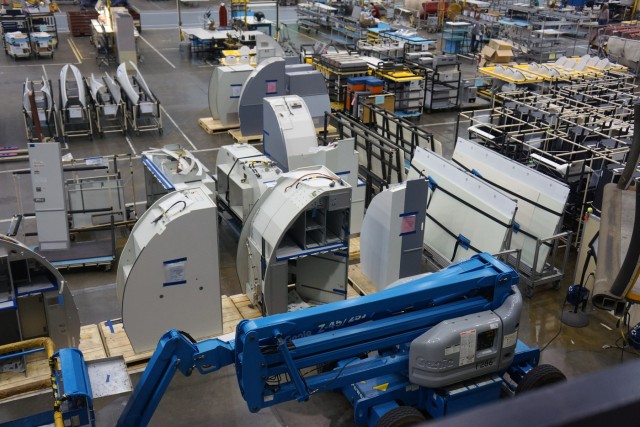 Galleys are among the buyer supported equipment being relocated to the new building to make way for the MAX line and increased production. Image by Chris Sloan.

Then in 2015, Boeing will construct a third ’œtemporary’ line parallel to line 1, to build the MAX. The lessons learned from the existing ’œClassic’ 2nd generation 737s interfering with 737NG ramp up back in the 1990s are clearly being applied nearly 20 years later. To make this happen, the prep area for engines, galleys, lavatories tails, and other components will be relocated, thus ’œclearing the clutter’. Boeing isn’t quoting the projected production figures for the MAX line. The plan is to integrate the MAX’s into the existing lines 1 and 2 as the 737NGs phase out. If production requires it, Boeing has the option of making the interim MAX line permanent or adding production in another part of the Renton plant. One mooted possibility is the separate line belonging to the P-8 Poseidon, a Naval variant of the 737-800 built for anti-submarine warfare.

With a clean-sheet design likely not due until the mid 2020s, Boeing has staked its future on the 737 MAX and Renton. Boeing has extended its lease to use Renton Municipal Airport through 2030. There’s always the chance of choppy air, but if history is any guide, the world’s most prolific aircraft factory is clearly up to the task.

Special thanks to: Boeing’s Doug Alder, Jr; Michael Lombardi, and Erik Nelson for their invaluable time, expertise, and assistance in the writing of this post.

http://www.theairchive.net
Flying on an Air Koryo Ilyushin IL-76MD in North Korea
Does the Boeing 747 Have a Future?
2 Comments

I love looking through a post that will make men
and women think. Also, thanks for allowing me to comment!

The Airbus A320 was the first direct competitor to the 737??? Have you never ever heard of the DC9?