After UPS stopped doing weekend passenger charters with specifically configured 727s, hitching a ride on a freighter became something most civilians could only dream of.  Even then, their charter aircraft had windows, conventional seats, easily accessible lavatories, and galleys. Although a 727 is a unique aircraft to fly on these days, I prefer Russian metal.

Soviet-era freighters are iconic. Anyone who has ever seen an AN-124 (Ruslan) land at KPAE knows the kind of crowd they can draw. I didn’t get to travel on a Ruslan, but I did get to go on the most common Russian cargo aircraft: The IL-76MD.

P-912 was one of the last IL-76MDs ever made, despite still being equipped with the ubiquitous Soloviev D-30. Rolling off the line in 1990, this aircraft has been with Air Koryo ever since. Those of you who read my IL-18 article will remember my primary complaint: It was not loud enough. The IL-76 totally comes through. 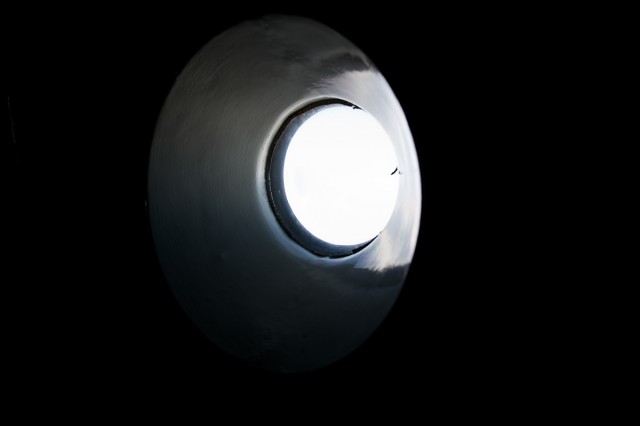 One of four cargo compartment windows on an IL-76

The APU of an IL-76 is in the right landing gear protrusion. I could hear that the APU was running before boarding the bus at the terminal, then on the bus, and finally after exiting the bus and gazing upon the massive anhedral wing; I was nearly bowled over by the howling vacuum-like noise being produced.

I would have stood around that area longer, but since there were only twenty seatbelts for forty people and a grand total of four windows I wanted a passenger experience that combined both. The bench-seats on the IL-76 have no padding, instead relying on the fuselage insulation to act as a back-support. The seatbelts, so to speak, are fixed to the same wall and only offer lap protection. If you do not have a seatbelt, best hang on or you may experience inadvertent ’œzero-G’ flight.

Unsurprisingly, it’s dark in there. I couldn’t see everything- and the windows are miniscule. Our cargo that day was a delivery of five thousand pounds of rice to the people of Hamhung (the city which utilizes Sondok air force base). Originally, we had wanted to also load up our tour bus. Air Koryo was game, but the Korea International Travel Company (KITC) did not want to risk any potential suspension damage from landing on their brand new King-long bus. 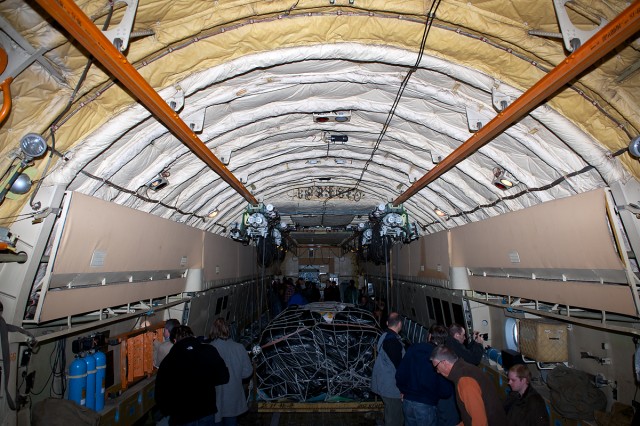 The cargo hold of an Air Koryo IL-76 featuring both rice and passengers.

Start-up was similar to an IL-62, but louder. There is always a persistent hum in the cabin, which I enjoy. Facing sideways in near-darkness, I had no idea we were taxiing. On the ground there is the odd bump, and an awkward sensation of motion- but the experience is closer to light-rail, or maybe a bus ride.

I was not expecting the style of takeoff we were given. Having two sets of nose wheels, an immense amount of thrust, and a very high-lift wing; we took off at a relatively flat, if not nose down, attitude. The experience was similar to a helicopter. We held that style of ascent for a few thousand feet and finally entered a more familiar, and comfortable, climb. It was then I was able to get up and take a look around the hold.

Not much to say about it other than it’s huge. There are no dividers until the loadmaster’s control panel that separated us from the flight deck. Being in the DPRK, we were not allowed to visit the flight deck until after landing. A shame, really, I’d love to have sat in the navigator’s compartment whilst in flight.

Landing was also wild. We landed in Sondok in the same fashion as we took off from Pyongyang. Flat! Very flat! The descent was steep and militaristic, but the only way to tell I had touched down is when I felt a great thud and a split-second impetus to fly upwards. The thrust reversers are also extremely powerful, and wonderfully loud. 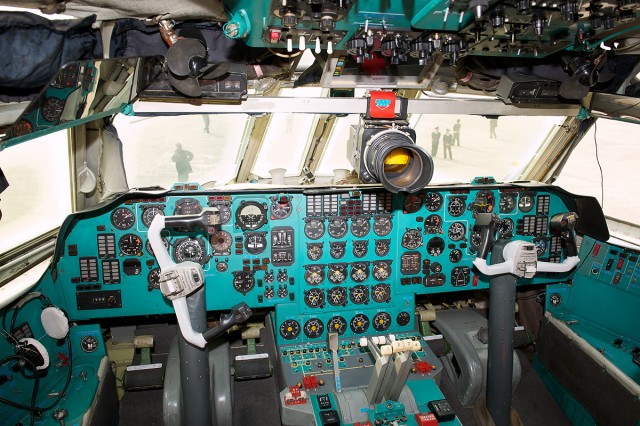 After landing, we were allowed to investigate this beast. I took my customary flight deck photograph, but due to crowding was not able to get a great photo of the glazed navigator’s station.  Oddly, even the navigators placed their hats on the ’œtop deck’ of the crew compartment and behind the flight deck.

After lunch in the city was when things became even more exciting. As the flight back to FNJ was to be done via AN-24 we were permitted to remain ramp-side and watch the IL-76MD ’œpush’ and start.

Safety is a relative thing — we were less than 100 feet from the aircraft for this whole procedure. I wish more countries understood that this kind of safety is what spotters and other AvGeeks really want.

To describe this experience politely is quite challenging. Imagine having four giant vacuum cleaners sucking air in around you while someone detonates a small explosive device next to your head every couple of seconds. Words cannot describe how perfectly loud the IL-76MD is without a ’œhush-kit.’

I made a video, but things were so loud my camera’s microphone just kept giving me ’œred’ on the equalizer. I’ve tried watching it a few times, but it doesn’t really do the experience justice. The IL-76MD was only plane I’ve ever seen, heard, or stood next to that was louder than not only gunfire, but also a rock concert.

Yesterday, while researching another completely unrelated Russian aircraft, I came across a photo on a Russian blog stating that during the 60th anniversary parade of the “War of Fatherland Liberation” at least one former Air Koryo IL-76 was seen flying over downtown Pyongyang sporting new camouflage. On July 26, someone, perhaps at a Chinese news agency caught a photo of what is believed to be P-912 sporting this new livery.

While no one can say for certain it is P-912- the strange thing about all this is that the tour company that provides aviation tours of North Korea still lists the IL-76 as a flyable option. The question remains; how many of Air Koryo’s IL-76s have been transferred to the PKAF and which registrations remain civil?

Read my other Russian Metal reports of the Ilyushin IL-62, Ilyushin IL-18 and Tupolev Tu-134.

https://www.airlinereporter.com
An AvGeek’s First Time Flying on Southwest Airlines
Inside Boeing”s 737 Renton Factory As They ”Take It To The MAX”
1 Comment

Thanks for sharing information about this new cargo aircraft “IL-76MD-90A”. Does this aircraft will overcome that big A400m aircraft in terms of military transportation?