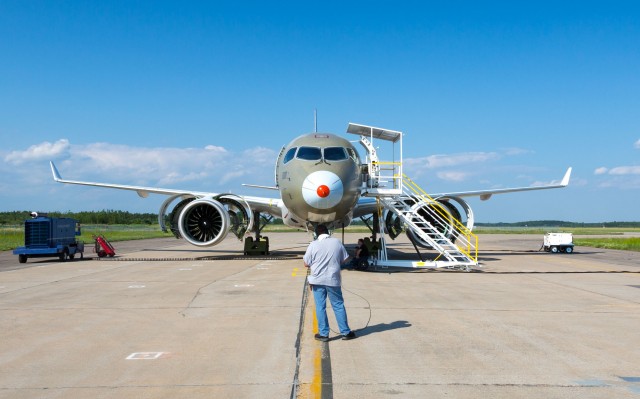 Engine and Auxilliary Power Unit (APU) testing has started, but so far, we don’t think CS100 Flight Test Vehicle 1 (FTV1) has yet moved under it’s own power.

FTV1 was supposed to be flying by the end of July. That was the date given by Bombardier after the previous first flight date at the end of June slipped by a month.  Last Wednesday was one week before the end of July, and Mike Arcamone, President, Bombardier Commercial Aircraft, made the announcement about the further delay.

Now, FTV1’s first flight is “to take place in the coming weeks.” 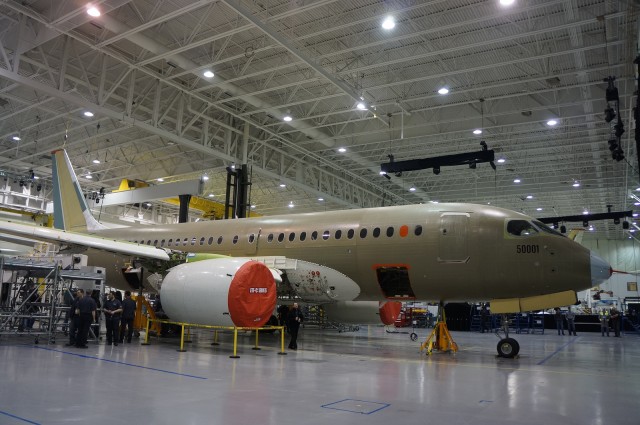 Arcamone stated, ’œSeeing the first CSeries aircraft power up on the tarmac was a thrilling event. We have now entered the ultimate phase of systems integration and validation on the first flight test vehicle as we submit brand new technology to in-depth tests. While the process has taken more time than we had expected, we are pleased with the results and are very comfortable taking more time to ensure the required integration is finalized and the CSeries aircraft is cleared for its first flight.’

In the last week of June, Bombardier applied to the Canadian aviation regulator, Transport Canada, for permission to fly FTV1. The CSeries may be the most advanced commercial jetliner ever produced in Canada, so I wouldn’t be surprised if Transport Canada is taking their time with the evaluation.

Lately, we’re seeing the media’s hyper-attention focussed on aircraft: Asiana at SFO, Southwest at LGA, and of course, the 787’s fire issues. The CSeries is being targeted, too, with it’s delay sometimes being compared against the A380 and Dreamliner. But let’s be realistic – a few months delay taken against the lifespan of a commercial aircraft program really isn’t significant.

However, once FTV1 does fly, Bombardier will have to ensure that the CSeries’ progress to Entry Into Service (EIS) is smooth and uneventful. Airline customers, and even more importantly, potential customers are watching very carefully. The success or failure of the program may very well depend on what happens after the first flight, not before.

We’ll be watching FTV1’s progess at Mirabel, and we’ll keep you updated.

http://www.wingborn.aero
Could this Be the Last Boeing 777-200ER Ever Built?
Taking a Special American Airlines 777-300ER Delivery Flight
8 Comments

I am stoked to see this bird fly! First flight can’t be soon enough. While I watched the webcast of the first A350 flight, all I could think about was seeing the first C-Series flight

Hey, James – are you planning to camp out at YMX? Other than the usual summer thunderstorms, the weather should be pretty good! 🙂

For years I listened to Bombardier workers laugh out loud and make fun of Embraer as if they were some sort of aerospace basket case. As soon as the E-jets started flying off the shelf ( no pun intended ) the laughing stopped.

Yah, and I’ve always wondered what went on at Bombardier when Air Canada ordered and started flying E-Jets.

‘But let”s be realistic — a few months delay taken against the lifespan of a commercial aircraft program really isn”t significant.’

Very true, but don’t forget it isn’t the first delay, and Bombadier did kind of shoot themselves in the foot by insisting half-way through June that the first flight would take place by the end of June. IMO they should have taken a hint from Airbus and refused to announced the planned date until two or three days in advance.

Yes, of course you’re right about the other delays. But they’re still within a year of their original first flight date and making progress. I do agree, though, that they put a lot of pressure on their team by giving out firm dates in the past. I think they did it better this time, with “in the coming weeks.”

Yup, if you’re signing on to buy a new plane as launch customer you better be in it for the compensation payments, because the chances of it actually being on time are slim. Was the T7 on time, because I can’t think of any other planes that were (in the last couple of decades).