Employees of American stand around a Boeing 777-300ER in new AA livery.

A while back, I was invited to fly on a 777-300ER (77W) delivery flight for American Airlines. In a previous story, I talked about all of the events leading up to the delivery ceremony and flight and now I will continue with sharing my experience.

I was pulling a very long night after the dinner event, working on photos and the writing up the first part of my story. I was up late when I got a tip about a second American Airlines 77W that arrived at Boeing Field in the cover of darkness from Dallas. This was surely not usual and I began researching and found that the aircraft N719AN was flown up, but why?

I tried to find out what was going on with N722AN (the new aircraft that we were supposed to be on), but I wasn’t able to find out the reasoning.  The next morning I spoke with American and they explained that there was as issue with some FAA paperwork which resulted in the airline having to fly another 777-300ER to Seattle — talk about some great problem solving skills.

When we arrived at Boeing Field for the delivery ceremony, sure enough the older N719AN was sitting at the tent where all of the festivities were set to take place. Even the American employees who were flying on the flight took notice that this was not the same aircraft that was at dinner the night before. Oh well, the most important thing was being able to lift off and head down to Dallas. 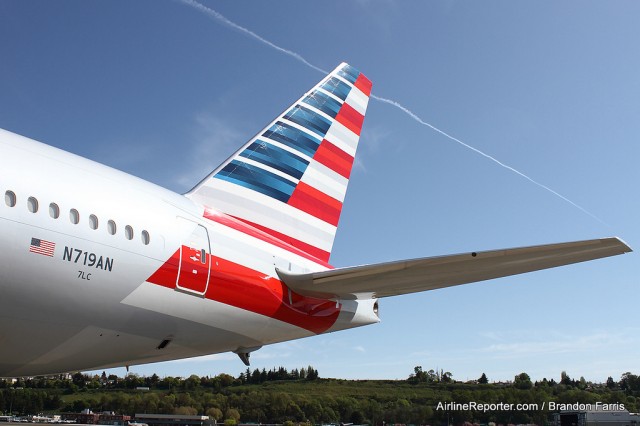 There is quite a bit of detail in American’s new livery.

I wondered why American decided to celebrate the delivery of their fifth 777-300ER versus their first, which went to the airline back in December 2012. Well, with the holiday season in full swing and then the next two deliveries were just in the middle of the airline changing brands, timing just worked out to celebrate the 5th 77W delivery.

This event was about more than trying their new product; the carrier was also taking time to appreciate employees who stepped up during the bankruptcy and the merger with US Airways. Employees from all over the company were invited to join in on the festivities; From maintenance workers in Tulsa, to corporate employees from Dallas, it was a nice variety. 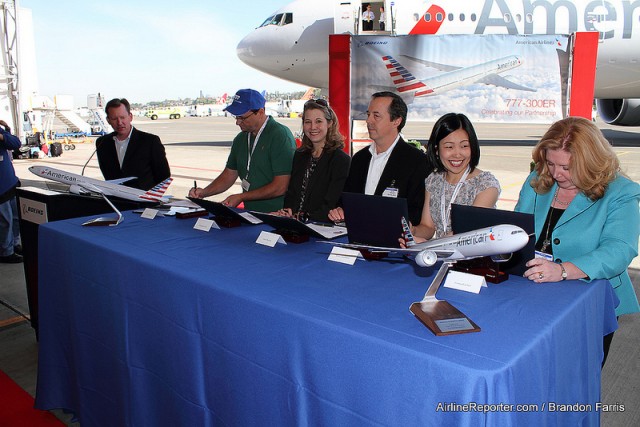 All the fun signing before getting onto the aircraft.

American also invited seven Boeing employees who helped build the airline’s 77Ws.  The 777 Program Director, Elizabeth Lund stated it was a nice gesture for American to invite some Boeing employees, ’œWhenever we get the opportunity to have our employees interact with our customers it is always a big deal for us, but also a great opportunity for our employees to see what it is that they have helped to build.’ 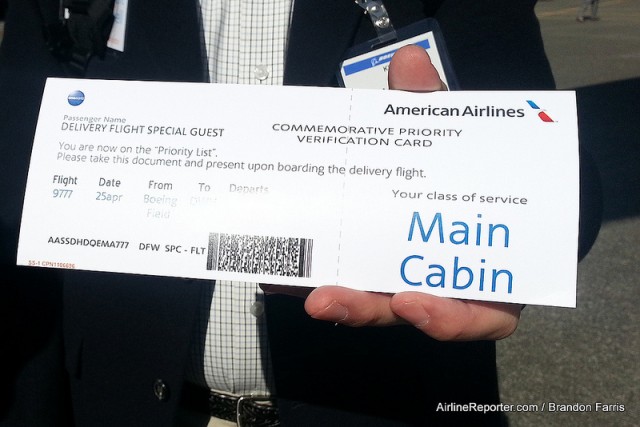 A special ticket for a special flight.

Soon,  it was time to begin boarding our aircraft for its  re-delivery flight.  After a short and sweet Boeing security experience (way better than the TSA), I was lugging my bags up the stairs onto the American 777.

When boarding, I couldn’t help but feel that this was definitely a new American. The cabin it felt very spacious and clean. This is partly due to the fact that American’s new 777 has adapted some of the features found in the 787 Dreamliner. There were spacious overhead compartments that give the cabin a more spacious feel and keep taller people from hitting their heads. There was also better mood lighting that gave the cabin a sense of space.

Since this was only my second 777 flight ever, I was probably one of the more excited people on the aircraft. Before I got too distracted I decided I should find a seat. We did not have assigned seats and my goal was to get a window seat. Lucky for me, I was able to score my own row. 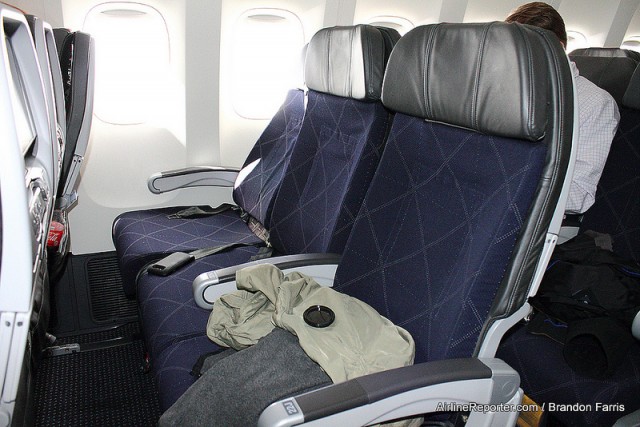 After getting a bit settled, I decided to spend some more time checking out the economy cabin. American Airlines decided to configure its 77W in a 3-4-3, 10 abreast setup. I found the seats to be very comfortable and I even managed to doze off for about 10 minutes during the flight.

Once I completed my walk around economy, I was asked to take my seat since we were about to take off. Now we were getting to my favorite part: engine start up.  Hearing the slow growl as the GE-90 begins to spool up gives me goose bumps every time. 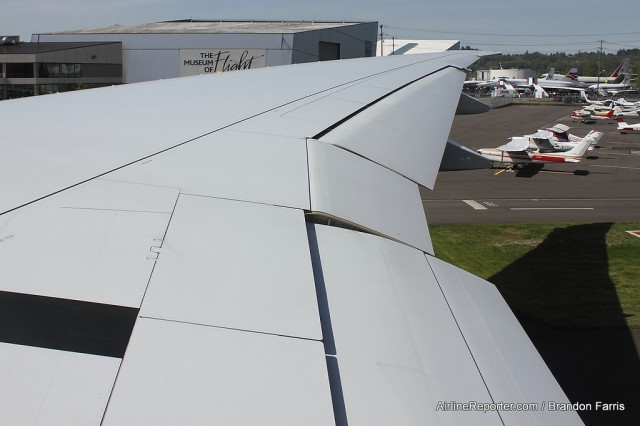 It is pretty rare taking off in a Boeing 777 out of Boeing Field. Check out the Museum of Flight’s Concorde and first Boeing 747 in the background.

We pushed back onto taxiway Bravo and were cleared to taxi to runway 31L for takeoff. My seat provided a great view to watch the flaps go down and prepare to depart BFI. Normally, passengers aren’t able to use electronic devices to take photos, but since this was a special flight, I was able to document the experience.

There was an obvious difference from taking off with the 777 being light versus being fully loaded. I really did not take very long before we lifted off. Since it was sunny in Seattle, I was treated to blue skies and a gorgeous view of downtown, not to mention a great view of Mount Rainier. 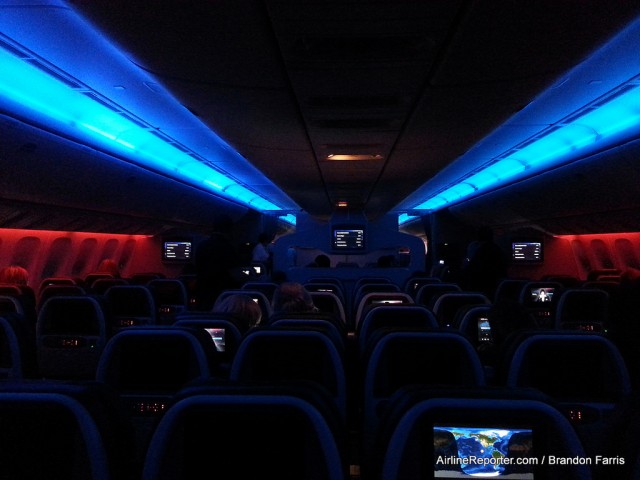 The lighting in economy on America’s 777.

Our three hour flight went by in a blur. The flight attendants played around with the mood lighting, letting us see the different options. They even had a favorite that they called  an “American Party” because it is red and blue, just like American’s main colors.

I had some time to play around with the new in-flight entertainment (IFE). It responded very quickly and I hardly had to press the large screen to get a reaction.

I was also happy to find airvents above my seat, since I know some airlines do not configure their long-haul aircraft with individual vents. 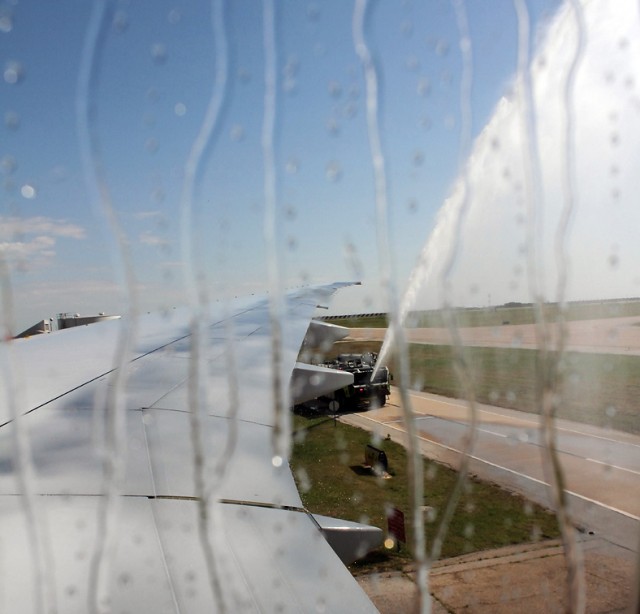 A water canon salute after arriving in Dallas.

Soon we landed at DFW on a far off runway and then taxied to one of the maintenance hangars where we were greeted by a water canon salute. This was the first time that I have ever been in one and I must say it was pretty awesome!

I feel that American really stepped up its game with the 77W, especially when compared to its aging 777-200ER. I tend to fly in economy 99% of the time and have to say that this one was very comfortable and had a spacious feeling. Of course I was in a row on my own for a three hour flight on a plane designed to go much longer, but I would much rather be in American’s new economy product versus those found on other airlines.

You really have to take a step back and look at what the carrier has done and gone through in the last 15 years. From being one of the airlines that was unfortunately involved in 9/11, to the A300 crash just weeks after it, to filing for bankruptcy, the airline has had its challenges. However it seems that the airline might be on the right path into the future and let’s hope that they can be successful.

I’m looking for ship tekits from Los angles to Germany

Costly for Turkish, but handsome change (profit) for Boeing.

I was sitting on the other side of the plane from you; great trip and nice ride, wish I’d have known and met you. The 777-323s are doing well in our fleet.