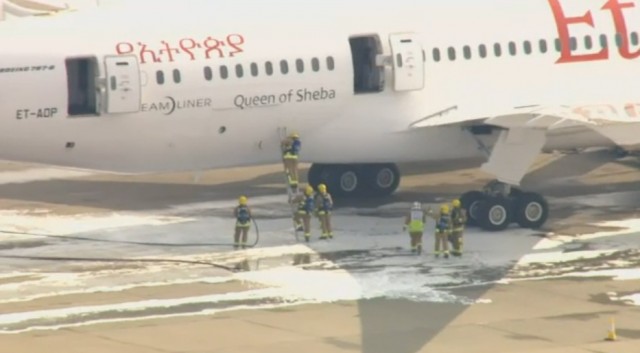 Ethiopian released a statement saying, “Smoke was detected from Ethiopian Airlines B787 aircraft with registration number ET-AOP, which was parked at London Heathrow airport for more than eight hours. The aircraft was empty when the incident was observed. The cause of the incident is under investigation by all concerned.”

Via Twitter, Boeing stated, “We’re aware of the 787 event @HeathrowAirport and have Boeing personnel there. We’re working to fully understand and address this.” It is likely that Boeing will work with multiple agencies [including the NTSB] to determine the cause of the aircraft quickly and make sure this was just an isolated incident. 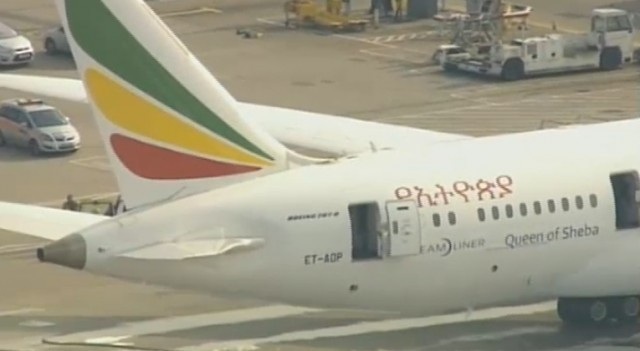 Live feed from Heathrow confirms aircraft is ET-AOP. From live feed via KIRO7.

According to the Wall Street Journal, an Ethiopian spokesman stated that, “We are investigating the cause with all officials involved, including Boeing and Heathrow.”  The WSJ is also reporting that Boeing stock has gone down 7% since the new 787 fire was announced.

It appears that the fire on the aircraft happened at one of the best locations possible at LHR. Aviation Week is stating that the fire, “could not have happened any closer to Heathrow’s airport fire station.” 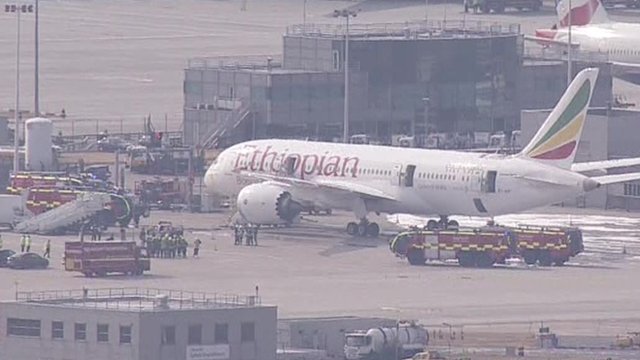 View of the Ethiopian Boeing 787 Dreamliner at Heathrow via BBC News.

Unrelated to the Ethiopian Boeing 787 fire at Heathrow, a Thomson Airways Dreamliner [Flight 126] heading to Standford, FL from Manchester had to turn back due to a technical issue. All the passengers were able to return safely and officials are inspecting the cause of the issue. The airline stated, “Thomson Airways can confirm that flight TOM126 travelling from Manchester to Sanford, Florida experienced a technical issue and the aircraft returned to Manchester Airport, as a precautionary measure.”

https://www.airlinereporter.com
From the Ramp to the Runway Without Engine Power?
Airline Livery of the Week: Pullmantur Air & Their 747s
36 Comments

What a nightmare for Boeing.

So, the likely question is – what caught fire in the crew rest?

looks like they had a APU fire, Boeing has been having a big over heating problem back there and the crew probably forgot to open the new vents.

someone on break was smoking in the lavatory…

Wondering if Airbus had anything to do with it?

APU is much further aft. This is within the cabin ceiling or galley.

There is no bleed air off the APU or engines on the B787.

Sorry need to correct myself. There is a small amount of bleed air off the engines for engine anti-ice. But none for the Packs.

If you fly in this aircraft, be sure to carry on hot dogs and marshmallows. You will be able to toast the marshmallows and cook the hot dogs right in your seat.

Reports are out that somebody left a coffee heater or something else in the galley on, and the switch overheated and caught fire. They’re also reporting that there is a ton of damage to the elevator system and other controls, and the plane may be a total hull loss.

If it aint glowing it’s not a boeing

So do you replace the entire barrel on a 787 with this kind of damage. It’s not like you can just replace a panel on other aircraft.

The fire on board this Dreamliner seems to be caused from a food heater found in the rear galley. If an appliance e.g. oven,hotwater heater, kettle , or heating element was left on then the circuit could have overheated and caused the fire. So was it a faulty circuit breaker. These are the likely possibilities.

But would there have been power available to the galleys with the aircraft being in a dormant state?

there was a power supply connected to the aircraft, ac/dc.

Clearly a case of sabotage by some pro-Airbus euro-dude or dudette. . . . no way a circuit breaker or coffee maker or microwave starts a fire. Just someone trying to guarantee their future income.

The location of the damage suggests a fire in the tail cone . . .perhaps a LiSO battery for the CVR or FDR. There may be batteries for the lights at the two aft exits as well. I understand there may be as many as 30 battery powered exit lights.

Yours in Safety,
Jim Helms

Why was it necessary to close the airport for 1.5 hours due to a small fire on an aircraft in a remote location?

Great question Tony and there’s only one GOOD answer – – – and that is to ensure as much attention as possible was directed towards this otherwise minor issue.

An issue which is undoubtedly unrelated to the original 787 battery problems and which very possibly was an act of sabotage by some frustrated Airbus supporter.

My guess being that the fire trucks were “in service” at this airplane, there would not be enough fire trucks for any other emergency should one arise during this event. Ergo, not enough trucks means closing airport till
event is resolved.

Wow! Thats scary. Wonder how they would have responded if, for example, there was another small grass fire somewhere on the airport property or medical emergency or another A/c fire….. Odd to think your resources would be fully comitted to this one instance with no ability to respond to anything more.

Will be interesting to see if this was caused by a part that was outsourced to one of the “partner” suppliers….how’s that working out for Boeing?

New news beginning to focus on the emergency locator beacon.

Speaking to the uncertainty of how to repair the composite fuselage –

i think flying with boing and airbus is becoming like a nightmare to me , each flight i swallow pills of DIAZEPAM to reduce anxiety and stress !each time i wish if i could travel by trains or vessels instead of air , it is a terror to die falling from 30000 feet ! ships ,trains and buses are much safer, but not available to all destinations.

Just discovered the other day that I have a photo of this aircraft leaving on a test flight from PAE in November ’12.