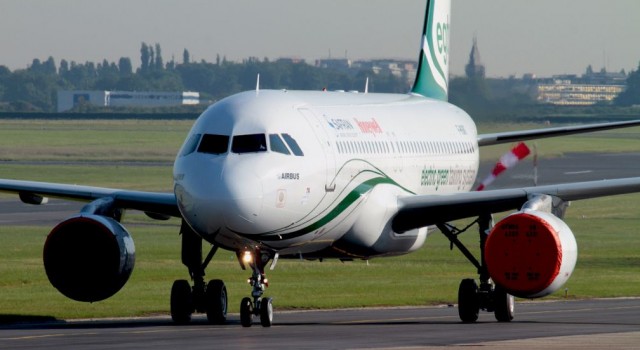 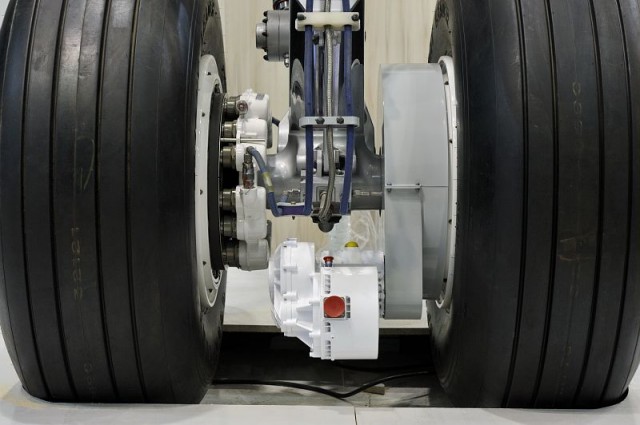 The EGTS 50 kw motor and drive system on the A320 main gear. It’s the white and grey unit.
Photo: Eric Drouin/Safran

It’s a stunningly simple idea, challenging in execution and made possible by advances in electric motor technology. Electric motors are getting smaller, lighter, and more powerful – you might have one in your hybrid car.  EGTS has a 50 kw electric motor and drive system built into the outer wheel on each main landing gear.  The system is powered by the APU and controlled by the pilots with a joystick console, at least in the demo A320.

The benefits of EGTS are impressive. According to Honeywell, the average short- to medium-haul narrow-body spends up to 2 1/2 hours per day on the taxiway. They figure that the direct fuel savings could be up to 4% per flight. Noise, emissions and even brake wear would be reduced, too. Engines put out a significant amount of thrust at idle, and the pilots have to use the brakes a lot to keep the speed down and stay in control.

Foreign Object Damage (FOD), which is what happens when anything but air goes through an engine, wouldn’t be an issue on the ramp or taxiways.  Ramp operations would become more efficient – aircraft tugs wouldn’t be needed, the time to taxi from the gate would be reduced, and the ramp area would be safer for ground crew.

I used to be a Ramp Rat at YYZ, and I was always aware of which planes had engines running. Your day won’t end well if you get blown over by the exhaust, or worse, sucked into a mighty GE90 on a 777.  With EGTS, pilots would start their engines when they reach the runway, not on the ramp.

It’s pretty wild to see this A320 maneuvering with it’s engine covers on. Click HERE to see it.

EGTS will have a top speed of about 20 knots (23 mph) and will be able to handle sloped taxiways and ramp areas. Needless to say, Honeywell and Safran will have to do extensive testing with different taxiway and ramp conditions. It has to work in snow, rain, and on ice. I don’t think they’ll be “chaining up” on the ramp at ORD!

UK’s easyJet will be the first airline to test out the EGTS, with operational trials expected sometime this year. EGTS is scheduled to be available for A320 and 737 new-build and retrofits starting in 2016.

What do you think? Are you having an “Airplane“ moment, and seeing Captain Oveur put the plane into gear and look over his shoulder as he backs out from the gate? Is this one of those new technologies that will become standard equipment?  Tell us – leave a comment!

Read about another viable option: WheelTug in another story I wrote.

Great story, Howard. It seems like a smart innovation that’s long overdue. I imagine 4 percent per flight would have airlines pretty giddy. And a high-five for the Airplane! reference (I think a third installment is long overdue, and one of the few sequels that would interest me!).

Thanks, Justin, I’m glad you liked the story! But another “Airplane” sequel? How do you top the first one? The second movie certainly didn’t…IMHO. But “maybe I just picked a bad day” to see it.

I’ll look forward to more stories as always. Have a good week!

Nitpick: it doesn’t have to work in snow/ice/rain as long as current taxi methods continue to work such as using engine power or a tug. If those adverse conditions occur 20% of the time, EGTS can still be used the rest of the time.

Hi Roger – of course you’re right. But I wonder what will happen on those slushy days at airports if some of tugs and crews are “downsized”. Will there be enough tugs to go around for pushbacks?

Me as a private pilot with a huge passion of commercial aviation have indeed an airplane moment and hope this will never become reality… but I know it will. Especially if it can save so much fuel per flight and be saver and so forth. Personally I will probably never be at the controls of a real commercial airplane but as a frequent flyer I am sad and will miss the engine start during push back and the nice engine sound during taxi.

Peter, they better start the engines before takeoff, yes? 🙂 So you’ll just have the start near the runway instead of the ramp. I know what you mean about the sounds – my favourite was the L-1011; it had a great “growl” as the engines spooled up.

I wonder how much it all weighs? Interesting.

Hi Greg – the system weighs about 150kg (330 lbs)per wheel, plus the weight of the associated wiring, control equipment, etc. The 4% savings has been calculated after taking the additional weight into consideration.

What about Wheel Tug? I have seen demonstration of their equipment on youtube more than an year ago…Wheel Tug also works with an electric motor using APU power.

Hi sudheer – yes, WheelTug is another E-Taxi system. The biggest difference between the two systems is that WheelTug is on the nose wheel, where EGTS is on the main gear. I’m thinking that time will tell if one system is better than the other. I know WheelTug has quite a number of orders from airlines including Air Berlin and Icelandair.

Is there any effect on engine wear and tear as a result of the engines being started much sooner before takeoff or is this not really an issue with modern turbofans? Kind of like how new cars don’t require warming up in the driveway and get up to operating temperature much quicker than older cars.

There is a warm-up time required after starting the engine before applying take-off thrust, usually about 3 minutes or so I think. The system would still be useful for long taxiing distances, long waits at the runway or taxiing to the gate after landing though.

Hi guys – I thought that once the N1 & N2 turbine speeds and the EGT (exhaust gas temp) were stable, then you’re good to go. Any A320 or 737 pilots out there who can tell us if there’s a time limit? But I’m guessing that crews will figure out when to do the start to have the plane ready. They’re doing that right now with single-engine taxiing.

This Airbus brochure mentions a 4-5 minute warm-up period required even when using this system: http://www.airbus.com/fileadmin/media_gallery/files/brochures_publications/FAST_magazine/FAST51.pdf.

You’re good to go for taxiing as soon as N1,N2 and EGT are stable, but full power is a different matter.

I look forward to seeing this on a easyJet aircraft. I fly for easyJet as Cabin Crew. The way forward i’d say. Great Idea.

Hi Graeme – let us know when you’ve flown, er, taxiied on an EGTS equipped plane. I’m sure readers would like to get a first-hand report!

Do you know if EasyJet is going to implement electric taxiing this year?

Stephen, I haven’t seen any updates on either EGTS or WheelTug EIS since last year.

Wow. Amazing tech. And written brilliantlt too. These tech helps make planes greener cleaner and leaner. In a country like india, where fuel is outrageously expensive, tech like these could help airines survive and profit. Kudos to honeywell and Safran for taking this iniative and airbus too for letting them try it out on their A320. #AvGeek.

The operators can do any thing to save fuel cost!from 4 engines to 3 engines to 2 engines.And now finally pulling thrust levers to idle from descent to RWY TDZE(touch down zone).Whlist taxing without fuel and then Get Set Go from threshold RWY,every time and at every leg of flying,in hot weather also.Will remind well to the flight crew,the horns and bells of caution and warning system and full of EICAS messages!
At the sametime Honeywell is well reputed for making 777 -200LR and777-300ERs APU( GTCP 331-500 APU).
See what will happen.
At the end of the day,it’s the operator,who buys the Aircraft and it’s accessories!