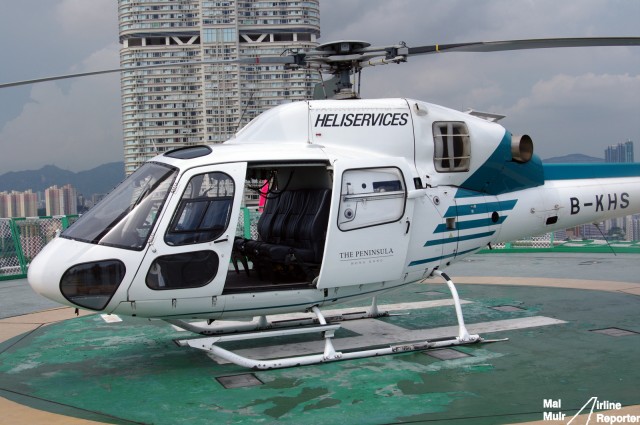 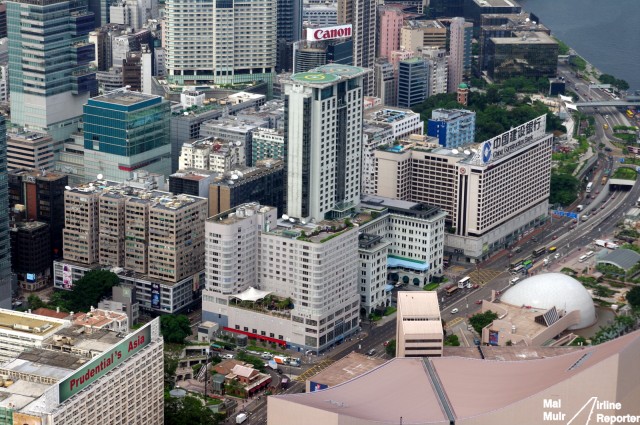 The Peninsula Hotel Hong Kong. The only hotel in Hong Kong with Twin Helipads on the Roof – Photo: Mal Muir | AirlineReporter.com

After getting our safety briefing in the luxurious China Clipper lounge [a story on that soon], we ascended the stairs to the roof top pads where our ride for day was waiting. Â  Our Pilot â€œBobâ€, a Hong Kong Native, got us all settled after I took some additional photos (the views were amazing from even the pads). The engines started and we prepared to depart.

Though this was not my first helicopter ride, it was the first that I have taken off from the top of a building, so the sensation of takeoff was unique. Â Due to winds we actually had to gain height before being able to move forward. Â The takeoff felt as though we were moving backwards, but once at height we tipped forwards and started a nice gentle turn to the right towards Hong Kong Island. 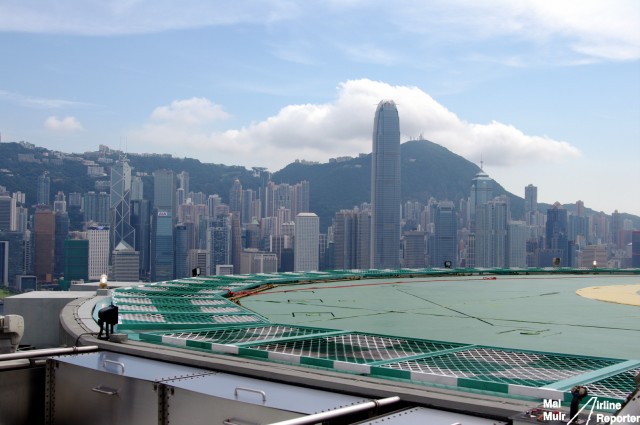 View of Hong Kong Island from the Helipad on top of the Peninsula Hotel – Photo: Mal Muir | AirlineReporter.com

I was sitting in the prime rear seat (left side) so that I could get plenty of photos. Â The views certainly were amazing as we skirted the Hong Kong Island coastline, taking in the views of â€œCentralâ€ with its high rise buildings and hotels.

We passed some of the ferries leaving Hong Kong towards Macau and even spotted a classicÂ Boeing 929 JetFoil (powered by Rolls Royce 501K engines — the same ones that power C-130 Hercules and P-3 Orion aircraft). 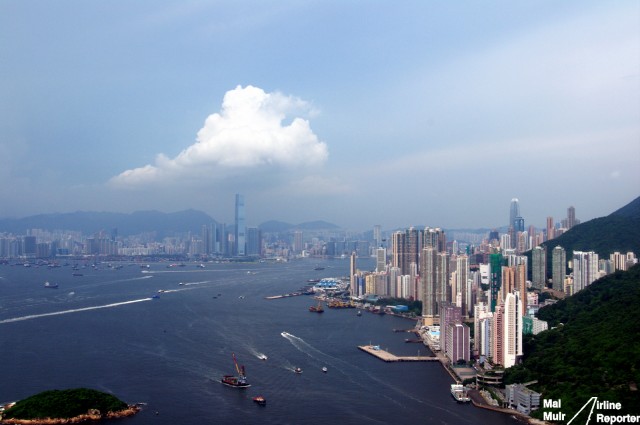 A view of Hong Kong Island and Kowloon as we fly around the islands – Photo: Mal Muir | AirlineReporter.com

We rounded Hong Kong Island passing Pok Fu Lam and saw the old cemetery that covers the hillside. It showed that even as time went by and the city grew, real estate was at a premium even after death.

We circumnavigated the island further passing Aberdeen Harbour and its famous floating seafood restaurants and approached the Ocean Park Theme Park where you can see a real panda — from the air. 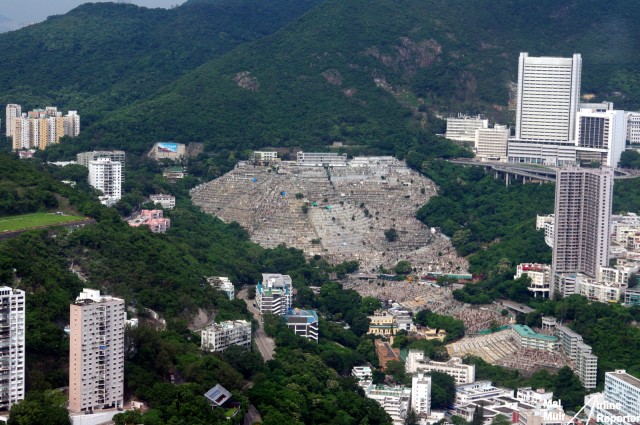 An old cemetery terraced into the side of a hill on Hong Kong Island – Photo: Mal Muir | AirlineReporter.com

After we passed over Repulse BayÂ &Â Stanley, weÂ started to turn back towards Kowloon while skirting the Hong Kong Island coastline. Â Off in the distance was a sight that could make any AvGeek drool: Â The former site of the infamous Kai Tak Airport.

The former international airport for Hong Kong was notorious for itâ€™s slightly scary (or exciting depending on your perspective) approaches over Kowloon. Â The airport closed back in 1998 and is now being turned into a cruise terminal. The pilot gave us a fun experience by doing a slow right turn over Kai Tak. Although my request to recreate one of the approaches had to be turned down. 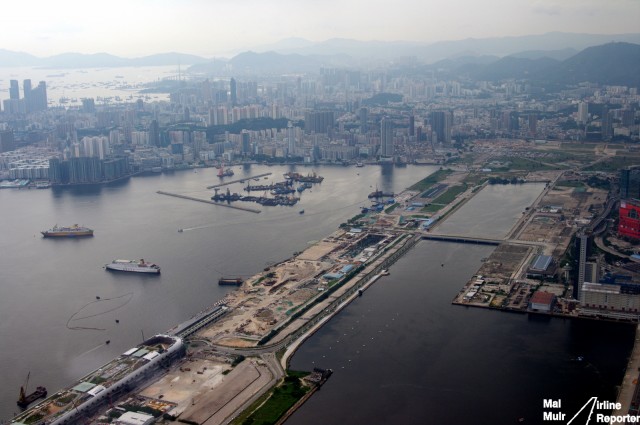 After leaving Kai Tak it was time to head back towards the hotel, although not first before a second detour. Â We headed on over towards the Ocean Terminal in Kowloon to get some photos of the Kowloon area but also of the giant rubber duck. 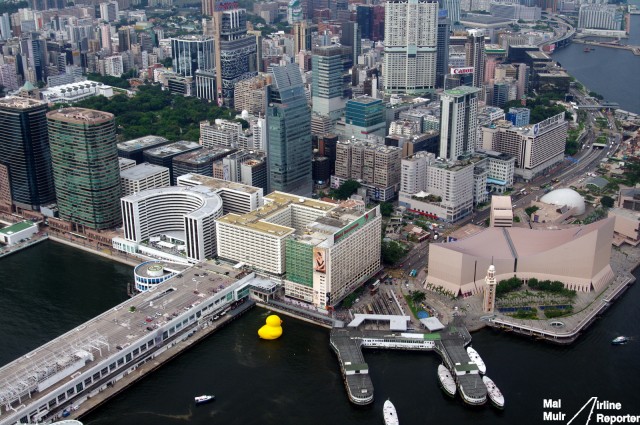 This large inflatable piece of art is moored in Hong Kong Harbour as part of the Rubber Duck Project. Â It has a cult following and when it suddenly deflated at the start of May, many people were devastated. Â I learned that the pilots in the area refer to the approach into the hotel from the as â€œThe Duck Approach.â€

Before shooting the â€œDuck Approachâ€ into the hotelâ€™s rooftop helipads our pilot hovered over Hong Kong Harbour. Out of the numerous helicopter flights I have been on over places like Ayers Rock, Grand Canyon or the Whitsunday Islands, I have never had the chance to hover at height. Â At almost 1900 ft, not moving in any direction, made for a unique feeling, especially if you looked down!

As we touched back down on the Peninsulaâ€™s helipad and jumped out of the helicopter, I had taken around 700 photos in the short 20 minute flight. Â It took a solid hour or more for my head to join me back on the ground — but that is not a bad thing. Â I had the biggest smile on my face after that flight and it possibly was one of the best helicopter flights of my life!

Thanks to Jason Rabinowitz for sharing his helicopter video.

https://www.airlinereporter.com
A Historical Look at Boeing’s 737 Factory in Renton
From the Ramp to the Runway Without Engine Power?
4 Comments

I can see my house 🙂

Kongawa which island is your house?

This sounds totally awesome.
Planing to go to HK soon and this wound be a really cool thing to do.