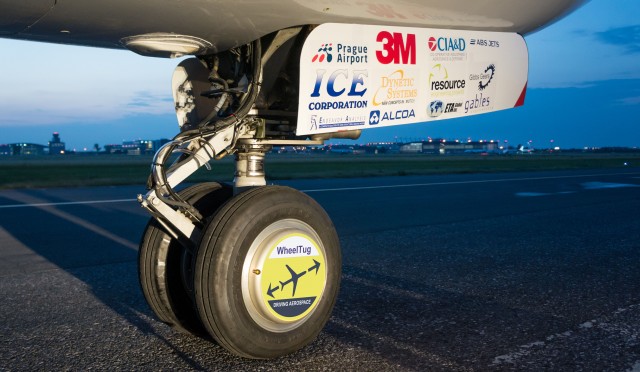 The concept dates way back to the late-1800’s. The first patent for a fully-incorporated wheel-hub motor was granted in 1890. Â Now, with new technologies, materials and manufacturing methods, we’re seeing these motors in e-bicycles, and concept cars and trucks. WheelTug did a “proof-of-concept” test back in 2005 on a Boeing 767.

That test used a big, external motor system attached to the nose gear, but it was able to move the almost-fully loaded 767. Â Once the concept was proven, WheelTug went to work to develop the technology to fit the motor system into the nose wheel hub. They’ve got dozens and dozens of patents for their tech.

Airlines are certainly on-board with the concept. Â WheelTug has reservations for over 570 delivery slots from 11 airlines. The customers include KLM, Alitalia, El Al, Israir,Â Icelandair, Jet Airways and Air Berlin. Installations will be on 737NG, A320 and 737MAX aircraft. WheelTug doesn’t yet have any reservations for wide-body aircraft installs, but I’m told there “are several under discussion.” Â They expect to have the system in operational service by the end of 2014, into the 1st quarter of 2015.

I’m Canadian, and I’ve experienced some intense winter weather and the flight delays that go along with major snowstorms. So I asked WheelTug CEO Isaiah Cox how well the system would work at heavy-snowfall airports, such as YUL and ORD. Â He answered, “It will depend on the specific conditions. There will be some situations in which WheelTug will not work as well as a tug, and we will be detailing those in the runup to EIS (Entry Into Service). Â But it will be a very small percentage of operating states.” Â WheelTug has already tested the system on snow and ice, and have designed it so that wheel-lift and tow-bar tugs can still be used on equipped planes. And of course, crews can always spool up the engines if they need an extra push.

Click HERE to watch the WheelTug 737 demo at Prague Airport.

So there you have it. Another duopoly working on the same objective. Â WheelTug and EGTS. Â Powered nose wheel vs powered main gear. Will one prove to be the market leader?Â Does one system seem to have an advantage over the other? Â What do you think E-Taxi will do to airport and ramp operations? Â Tell us – leave a comment.

http://www.wingborn.aero
An Inside Look at a Restored Douglas DC-3 at Historic Flight
Denver, Dreamliner, Tokyo, Singapore, Hong Kong & Back in 77 Hours