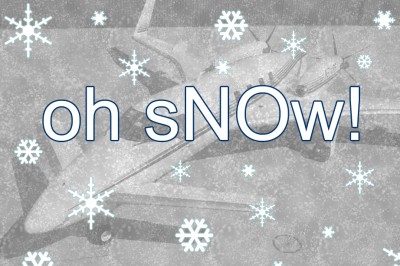 Darn you snow! Why you gotta ruin my Starship flight?

I was hoping this blog would be talking about my Beechcraft Starship flight, but it just wasn’t in the cards. Yesterday I got up at 3:45am to get packed and ready to head from Seattle to Denver to Aspen to meet Robert Scherer and his Beechcraft Starship NC-51. I knew there was a storm going through the Denver/Aspen area and had been watching it closely. When I was leaving all flights were still running on-time, so I flew down to Denver. When I landed I had an email from Robert saying it was snowing hard there, but we would try out best — I was starting to get worried.

After a short conversation, we decided to try our luck and I started waiting for my Frontier Airlines flight from Denver to Aspen on a Bombardier Q400. I was hoping that if the Q400 could make it in, the Starship most likely could make it out. So far my flight and the few others flights heading to Aspen were running on-time. So far, so good.

Then my flight was posted 30min late. Okay, I can understand that, it could be running late due to weather, that seems normal. I was feeling okay about the delay, until I caught a glimpse of my Q400 sitting on the tarmac, covered in snow. This means that the plane was not running late, but they were waiting on weather either at Denver or Aspen — not a good sign.

I decided to hang out in the main terminal since the regional aircraft wing seemed a bit warn down and not as nice to be in. Because of this, I was checking my phone every five minutes looking for additional delays. About 45minutes before its origional scheduled time, the flight got cancelled. Went to the reader board and saw that every flight throughout the day was cancelled to ASE as well.

When talking to Robert the weather had gotten worse there and since I have work on Monday, I decided I had to call it quits and try to make my way home.

Bummer. Super bummer. It has been since April 2009 trying to set up this flight and got pretty darn close. Luckily I was able to make it to a Frontier customer service counter quite quickly and was put on a flight back to Seattle for free, scheduled to leave in just 30 min. I got the last seat on the plane – a window seat none-the-less – so I am grateful for that. Not that I wouldn’t have minded being stuck in Aspen with a bunch of fresh snow.

Robert was disapointed as well and is willing to try this out again. For most people, it would be a waste of a day and money to just fly from Denver to Seattle and back, but it makes a nice day for an airline nerd. Yea it totally bites I had to pay for my ticket to Denver and then lost my ticket from California back home, but it was totally worth it for a chance at the Starship. You can expect a review of flying Frontier quite soon and hopefully a blog talking about my Beechcraft Starship flight.

Hang in there. At least you didn’t get stranded away from home waiting for the weather. You’ve still got an arrangement to ride on a Starship (the one that’s the chase plane for SpaceShipOne and Two). Most aviation enthusiasts can only dream of that.

Oh no. Better luck next time.

I have flown Frontier quite a bit (I thought they’d dumped all the Q400s…or just for the CO short flights now? And are they still Lynx?) I’ve been on the CR series they are flying on some of the shorter hops. I love flying with a “spokesanimal” on the planes, though, I do feel a bit like a traitor to Boeing since it’s a predominantly Airbus fleet…

I hope your Frontier experience was nice. I’ve always liked them.

They are still running the Q400’s via Lynx from DIA-ASE for now. But even UAL’s regional jet flights were cancelled going into ASE as well.

Any news on another flight? Weather has not been good in CO lately….

Nothing yet, but no worries, I am sure it will happen. I am kind of hoping for a little better weather, although the idea of flying into Aspen and then back out with snow is pretty exciting.