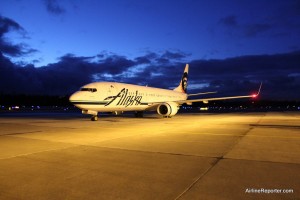 Bellingham is located about an hour and a half north of Seattle and about fourteen miles south of the Canadian border. Over the past few years Belingham International Airport (BLI) has been growing tremendously. Friday was an exciting day for the airport and Alaska Airlines. Even though Alaska and their sister carrier Horizon Air have been flying out of Bellingham to Las Vegas and Seattle for quite sometime now, Alaska has now started non-stop service to Honolulu (HNL). They will fly to Honolulu and back once per day using a Boeing 737-800 aircraft. Alaska started their first flight to Hawaii in 2007 and now has eighth west coast cities connecting to the islands of Hawaii. 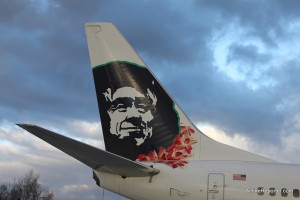 I asked Christina Aldanese of the Hawaii Visitors and Convention Bureau if Hawaiians thought it odd to fly on planes to the west coast of the United States on an airplane that has “Alaska” on the side. She explained that Hawaii and Alaska states have a sort of sisterhood with both not being a part of the continental United States and the last two to join the union. Many folks going to and coming from the islands truly appreciate the additional flights that Alaska has provided.

Since this was such a big (and fun) deal, Alaska wasn’t going to let this happen with out some special treats. Passengers were greeted by employees in Hawaiian garb and were given a special party bag, food and drink. After going through security, there were Hawaiian decorations and more food and drink at the gate. Before boarding, there was an Hawaiian blessing done with a gentlemen in Hawaiian garb chanting and splashing water from a bowl with what looked like braided seaweed. He started from the gate and went through the plane and back inside. It was quite entertaining to see. While he was doing this there was an Allegiant flight that was de-boarding and I don’t think I have seen so many looks of curiosity from passengers.

There were plenty of smiles coming from people as their boarded the aircraft, knowing in a few hours they would be in Hawaii. Although Alaska is the first airline to fly from Bellingham to Hawaii, they most likely will not be the last. Allegiant has announced they plan to commence flights out of Bellingham, but their ETOPS certification of their new Boeing 757’s have been delayed, causing the flights to be pushed to at least 2012. This will give Alaska time to market their new route and start to build a loyalty for passengers flying from northern Washington and southern British Columbia to Honolulu.

To help you celebrate, Alaska is offering special discounted tickets for quite sometime. You can fly to HNL from BLI for just $149 each way — hmm, maybe I can take advantage of that.

https://www.airlinereporter.com
Sitting in the Middle Seat Sucks
My Quest to Ride on a Beechcraft Starship: Attempt One Failed
6 Comments

Check your geography. Bellingham (and its airport) are closer to 15 miles south of the border, not FOUR.

Delta tried to start flights from Atlanta to little Hickory, NC airport (40 miles north of CLT) to market the golf crowd. Unfortunately, the disintegrating economy and far less than full RJ’s ended that attempt after a year. Hickory eventually abandoned all commercial flights since it is centrally located between Bristol-Tri Cities TN, Asheville, NC and CLT. Now there is a very nice (and free) air museum in its place.

Thankyou Alaska Airlines, Canadians are being ripped off by their National Carriers without exception. My frieds and I travel from the US exclusively to American destinations close to our Canadian ones and commute from the US to Canada, and also find flights from the US to just about anywhere to be about half the price than from Canadian origins. We’ll be flying American until Canadian Carriers see the light.Do a visual inspection at the Seattle airport, about 45% of the vehicles there are Canadian, I wonder why?