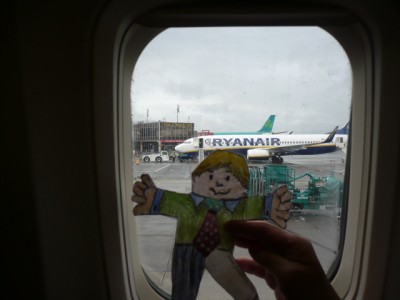 Amy's family took this photo when flying from Shannon to Paris in 2008. Dorothy (Amy's mom) points out the Aer LingusÂ plane in the background going to the same airport and charging three times more than Ryanair.

Due to a study abroad experience, and later a work relocation for a family member, Iâ€™ve had the opportunity to travel a bit in Europe, flying on Ryanair about 15 times.

Ryanair has cheap tickets to various cities in Europe.Â  They have a great business model â€“ no question about that.Â  I think that anyone who is duly warned about the downsides of flying Ryanair and then complains about it is getting exactly what they deserve.Â  Itâ€™s a low-cost airline, and they donâ€™t owe you anything.Â  If you want a first-class experience, go ahead and pay three times as much to fly another airline.Â  If your main concern is fast and cheap Point A to Point B service to another European city, then low-cost airlines like Ryanair or Wizz Air or easyJet or whoever is the cheapest that week will do just fine.

You should do your research whenever you plan a trip, thatâ€™s a given.Â  There a few things to consider if youâ€™re deciding whether or not to fly a low-cost airline on your trip.Â  For ease of comparison, Iâ€™ll refer to the points that David and Stephen McNamara were debating about Ryanair.

#1: Customer service â€“ Low-cost airline staff are primarily concerned with efficiency.Â  You may be trading above-and-beyond friendliness for getting the plane off the ground in time.Â  I donâ€™t exactly equate on-time arrivals with â€œcustomer serviceâ€ but itâ€™s important to recognize that Ryanair has a good on-time arrivals record.Â  Ryanair doesnâ€™t do connections, so being on-time is pretty critical if youâ€™re hopping around.Â  I was only on two late flights, and only one was a little catastrophic for my vacation plans.Â  Did I go complain to Ryanair?Â  No way.Â  Did I expect them to pay for my 200 Euro cab ride because I missed my train?Â  No â€“ I knew exactly what I was getting into when I bought that cheap ticket.

#2: Charging for the little things â€“ Yeah, there are lots of fees that make that cheap fare go up (though probably still cheaper than a larger airline).Â  Hereâ€™s a list of Ryanairâ€™s fees.Â  However, if you have no checked luggage, can find a promo fare with no check-in fee, donâ€™t need snacks or drinks, donâ€™t need priority boarding (which most families do) and have no sports equipment, musical instruments or baby stuff (including actual babies â€“ 20 Euros), you can avoid a lot of fees.Â  Think 22 year old backpackers.Â  This is their heaven.

#3: Flying to small airports â€“ Ever heard of Reus, Spain?Â  How about Beauvais, France?Â  Thatâ€™s â€œBarcelonaâ€ and â€œParisâ€ in low-cost airline speak.Â  Many (but not all) of the airports that low-cost airlines fly to are outside of the major city where your hotel probably is.Â  In this case, youâ€™ll probably pay about 15 Euros to take a bus for 1-2 hours.Â  In Weeze, Germany, I believe the bus we took into Dusseldorf was also owned by Ryanair, which is pretty genius.Â  When flying from London to Dublin, I booked a flight from Stansted and it required a one-hour train ride from London, adding another 30 BPs to the overall cost of the flight.Â  It makes sense that flying to smaller airports keeps costs low â€“ and itâ€™s usually not a big deal.Â  Just know how to get to the main city.

#4: Ryanair is popular â€“ Well, yeah â€“ Ryanair was kind of the pioneer in this market and their route coverage has just grown and grown.Â  After awhile I would just assume that Ryanair had a better/cheaper flight than its competitors.

#5: Charging to make reservations over the phone â€“ I never called to book flights (Iâ€™d go to internet cafes), so I didnâ€™t experience that first-hand.Â  I guess their argument is that people who use the online booking shouldnâ€™t absorb the cost of paying customer service representatives that answer the phones.Â  Use the internet, itâ€™s 2010.

#6: Almost never giving refunds â€“ I would never have expected a refund from Ryanair.Â  They are pretty upfront about being a bare-bones airline, and Iâ€™m sure the other low-cost airlines are the same.Â  Also, if you donâ€™t get a refund, youâ€™re really not out that much money.

#7: People fly, in spite of their complaints â€“ For me, the positives (cheap, good schedule) outweighed the negatives (slight inconveniences, occasional fees, minimal customer service). Â There is certainly something to be said for the â€œif you donâ€™t like it, go somewhere elseâ€ approach.Â  There were a couple of times I felt frustrated and declared that I would never fly a low-cost airline again, but that feeling only lasted until I got to a computer to try to book my next trip.

Low-cost airlines in Europe really are in a class of their own.Â  For most routes, it seems like they compete more with ground and sea travel than they really do with large, long-haul airlines.Â  I came to view the small airports like train stations â€“ lines arenâ€™t too long and you donâ€™t need to be there very early.

Basically, if any other airline could offer better customer service, fly to bigger airports, and still be cheap â€“ theyâ€™d run Ryanair out of business.Â  But it doesnâ€™t look like thatâ€™s going to happen, so for now low-cost airlines like Ryanair are your only choice and they know it.Â  Consider yourself warned and make sure to do your research.

https://www.airlinereporter.com
Q&A: Why Don’t Airlines Put Screens in Engines to Stop Birds From Being Sucked In?
Ten Interesting Facts about the Rolls-Royce Trent 1000 Engines Used on the Boeing 787 Dreamliner
1 Comment

We flew RyanAir a LOT in Europe 2002-2003. You get exactly what you pay for, which is, a flight from one obscure airport to another. That said, it made it possible to travel to all sorts of places we otherwise couldn’t (12 pounds to London? Yes please.) and even with the train/bus trips it was still far cheaper. Also, we have some pretty hilarious stories about power tripping flight attendants. You don’t get those on your fancier airlines!