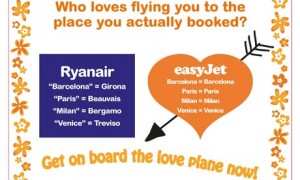 easyJet gets down and dirty, but Ryanair started it!

I can’t figure out if Ryanair and easyJet really hate each other or love the fact they can constantly fight. Recently they have been going at it over their advertisements. Ryanair struck first by asking why easyJet won’t publish their on-time numbers.

The ad shows Sir Stelios Haji-Ioannou, the Founder of easyJet, with a Pinocchio nose and asking why easyJet says, “punctuality…is a top priority,” but hasn’t published their on-time stats for 37 weeks. Ryanair claims they have “lower prices and better punctuality than easyJet,” in the ad.

EasyJet struck back with their own ad pointing out that Ryanair states they fly to certain cities, but really fly to much smaller cities up to an hour away from the city advertised. This ad got Ryanair worked up and they complained to the Advertising Standards Authority (ASA), stating that easyJet was trying to accuse Ryanair of false advertising. The ASA ruled in Ryanair’s favor and the campaigned was banned.

Seems a little bit like Ryanair can dish it out, but doesn’t like to get dirty advertising back.