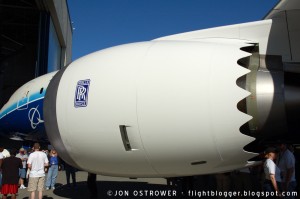 https://www.airlinereporter.com
OPINION: From Someone Who Has Flown Ryanair
Fun With Photos: What is the original airbus?
15 Comments

Putting #10 in perspective, “3dB quieter” literally means it cuts the sound in half.

Every 3dB up doubles a quantity. And every 3dB down cuts it in half. See http://en.wikipedia.org/wiki/Decibel

That’s impressive for any jet.

Be careful – Rolls Royce paid millions of Dollars a year in secret corruption and slush funds to help sell their aero engines to airlines that will be “advised” (or forced!) by those receiving the secret slush funds.
Just one example is that Tommy Suharto (son of the ex-Indonesian president) was given about 20 million dollars and a new blue Rolls Royce car by Rolls Royce (before he was jailed for murder!) to force the Indonesian airline Garuda to take the R-R Trent 700 engine on the A330 aircraft they were buying. They got a really bad commercial deal and the follow-on warranty and support was probably the worst any operator had ever had. When Tommy was jailed, Rolls then paid his millionaire friend, Soetikno about 1 million dollars a year! This was supported by the Rolls exec in Indonesia (Dr Mike Gray) because Mike was given “personal benefit” by Soetikno to keep the contract going. Mike even used RR staff to support the bar girl he was “knocking off” when his wife was away.

What a load of absolute guff. You clearly have a grudge against RR and are trying desperately to shame them. As for someone being given a RR car as some sort of bribe, RR PLC and RR are 2 completely seperate entities. It would be like Boeing giving someone a Jaguar !! What a story teller you are…

#6 is very interesting indeed. I guess you calculated that using the thrust and torque offered by the airplane and the car ?

#6 has me baffled, please explain. Is it cost per seat mile that is being compared? If so I get it. If not???

Power is just thrust times speed at take off.

They’re talking about just a locomotive, not an entire train.

more information here
I just like the valuable info you provide on your articles about click here. Iâ€™ll bookmark your weblog and take a look at again here frequently. I am quite sure I will be informed lots of new stuff proper here! Good luck for the following!

@ Dick, no different (if true ) to any other company the yanks have been very good at it for years, military hardware is a fine example.

Thanks for sharing information in your blog