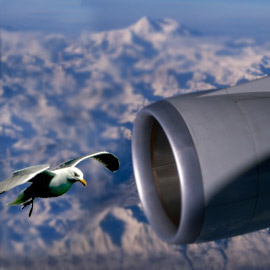 Don't worry, no birds were hurt in this photo.

Recently a reader made a comment on an old blog asking why don’t airlines or manufactures just put screens over engines to prevent birds from flying into them. I thought this was an interesting enough question to answer in a new blog, since I have heard others ask this same thing.

Yes, birds might seem light, but any object going 300-600mph is going to cause some serious damage when making impact. The strength and amount of reinforcement needed to go over the opening of an engine nacelle would have to be quite intense. Even if the screen held up, the bird would be stuck on the screen, stopping air from going into the engine, still causing a problem. If the screen failed, it would be sucked into the engine causing even more damage.

It is also important for air to smoothly enter the engine to optimal performance. With a gate in front of the engine, it would cause the air to slow and become turbulent, making the engine less efficient.

Overall with the lack of efficiency, the difficulty to make it work, and the rarity of bird hits, it is just not feasible to put a screen in front of engines.

https://www.airlinereporter.com
Ryanair Emails Again to Rebut My Previous Blog
OPINION: From Someone Who Has Flown Ryanair
4 Comments

Simple , Strap a few American wannabes on each wing at each engine with a tennis racket, 1 merit for every bird, the trust and honor merit system. Problem solved. SWAT, SWAT, SWAT.

Instead of Screen, Why Donâ€™t Airlines Put a STRONG STEEL GRILL in Engine to Stop Birds From Being Sucked In?