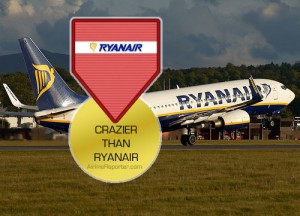 Ryanair out does themselves this time!

I love Ryanair. Personally I have never flown them, but I have absolute respect for what they are able to accomplish. They provide sub-par customer service (and are almost proud of it), charge for everything, fly to smaller airports, but are one of the most popular airlines in the world. They charge customers to call their customer service hotline and are well known for almost never giving refunds. Yet, they provide super low fares and passengers keep flying them. I talk over and over again how powerful this business model is and how someday it might come to the United States. Passengers complain about bad service and fees, but they keep dealing with it, as long as they get the cheapest fare. How can we hold Ryanair responsible if people are willing to pay? I can’t, but I sure can blog about their shenanigans.

Ryanair will announce crazy things and sit around while the world media talks about it and gives them free press. I know I am guilty of this as well, but they provide such great material. Trying to get a comment from them, especially as a blogger, is nearly impossible. I have tried to make contact with Ryanair on multiple occasions with no luck.

This is why I was so giddy to see an email from Stephen McNamara, Head of Communications for Ryanair, in my inbox this morning. Yes, it goes to insult my integrity as a blogger, but man oh man, it was a welcomed surprise. Ryanair was actually talking to me…something not many bloggers can say!

So where to start?

A while back I blogged about Ryanair ditching passengers at a wrong destination with no help. Looks like I might have been wrong and I for that. I stated that due to weather, the Ryanair flight was diverted to Fuerteventura and then took off leaving the passengers stranded. McNamara corrects me:

â€œRyanair flight FR 6766 Bournemouth â€“ Lanzarote (17 Feb) diverted to Fuerteventura due to bad weather in Lanzarote. Ferries between the islands, which are used for the onward transportation of passengers in such cases, were also affected by high winds so passengers were provided with EU261 information which outlines their entitlement to provide receipted hotel expenses to Ryanair, for refund. Ryanair arranged ferries to carry affected Ryanair passengers to Lanzarote free of charge when ferries recommenced the following morning. Ryanair apologises to passengers for any inconvenience caused but can never put passenger convenience before passenger safety.â€

No problem! I have recently heard from other sources that it seems there was one very unhappy passenger that turned this small story into Ryanair bashing. I have updated my blog, but in my defense, major news organizations were covering this, like the BBC for example.

Ok enough of the background information, let’s get to the fun parts of the blog. McNamara actually didn’t email me directly at first, but wrote to the Seattle Post Intelligencer, where my blog is syndicated. The syndication just pulls my RSS feed and they have no responsibility for my content, so passed the message on to me. In his first email McNamara states, “This blogger clearly likes to express his opinion without undertaking any research (to the detriment of professional bloggers who research their pieces and do not simply type the first stupid idea that comes into their head) I ask that this blog be removed.” Haha, that’s right, he said, “stupid idea,” man I love Ryanair. You know, writing about stupid and crazy ideas like charging for bathrooms, talking about “BJ’s” on flights, letting passengers smoke, making passengers stand to fly, and many more.

If I got this email from any other airline I would be horrified. I always try to keep positive when talking about airlines and have a professional relationships with the airlines I work with. Getting this from Ryanair is a total compliment in my mind. They are the elusive airline, that any blogger would love to have communication with. They are well known for brushing off bloggers as a waste of time. To know that McNamara is actually reading my blog and enough to write two emails responding to it… all I can say is, how awesome.

The Seattle PI, very professionally let McNamara know that they have no control over my content and since I am an independent blogger, he needs to write me directly. McNamara’s didn’t like that so much and wrote to both of us. His reply is so priceless, I just have to post the whole thing:

“Your answer is less than satisfactory and it is a damming indictment of the Seattlepi.com that you would allow clearly incorrect and biased information appear and remain on your site â€“ brushing this off as an issue for the publisher is simply rubbish â€“ it is on your site, you are the publisher.


If you were contacted by a reader over an article which contained racist or foul language for example, I am sure you would have the power to remove or edit the piece. Far from this simply being an issue for the independent publisher it is also your responsibility, as the site hosting the information. You are responsible for what appears on you site â€“ David simply writes his opinions, as he is entitled to do â€“ your site allows that opinion to be broadcast to the world.


I have ccâ€™d this to David as instructed â€“ however this underlines how irresponsible blogging and irresponsible hosting of such blogs, which fail to look at facts but simply provide biased opinion, undermines the worth of all blogs â€“ to the detriment of those bloggers who display journalistic integrity and provide balance.

Classic :). What is great is there is no comment about any of my other Ryanair posts or my Crazier Than Ryanair Medal, which I have plenty. I am hoping this means McNamara is open for me emailing him directly to “research” any future blogs I write about Ryanair — I am good with that.

Ha ha ha! I love TO HATE RYANAIR! Like I voted at the end of last year, my favorite posts have been the “Crazier than Ryanair” medals! I think you can now create a “Ryanair is crazier than itself” medal! Stephen McNamara can go fly a kite! NO! Wait! He might get charged by Ryanair for doing it! Never mind!

So, your answer is “damming” an indictment, as in creating a barrier, or obstruct? That one mis-spelling from a communications head is enough to make me laugh.

He probably didn’t want to cuss in the email 🙂

I wonder if Ryanair knew you’d write about the email (they are genius at this sort of thing). Excellent blog, by the way!

I really thought about that too. But just like with everything else Ryanair does, it is win-win. They get publicity and I get to blog about something crazy they did :).

I don’t get his complaint, while this site does occasionally break its own news, the vast majority of blogs are OPINION. We have news papers and journalists for actual news. I think he’s confused.

I am not even sure if Ryanair knows much about social media and blogs. I do know they like to make an impact 🙂

Well, had it been from Michael “the mouth” O’Leary: THE ENTIRE EMAIL TO YOU WOULD HAVE BEEN IN ALL CAPS, INDICATING HIS ABILITY TO SHOUT, AS THAT’S ALL HE DOES IN THE INTERVIEWS I HAVE SEEN HIM IN WHEN SOMEONE MAKES A POINT THAT HE DISAGREES WITH (IE: A RATIONAL PERSON WOULD NOT CALL HAHN FRANKFURT) OR MAKES HIS AIRLINE LOOK BAD.
…just sayin’…

I don’t know what I would have done getting an email directly from Mr. O’Leary himself.

So are you going to answer him? What will you say? Will you let us know?

I did reply, it was not very interesting. Thanked him for contacting me and that I fixed the blog.

I figured he probably isn’t reading it anyhow.

I think that’s wise… No use in engaging him about your whole “bashing” of Ryanair. I also like that you apologized for your error even though it was understandable. I wonder if he also wrote to the BBC!
I really don’t think he gets blogs!

Nonetheless, it is still the P-I’s responsibility to maintain control over what goes on their website. You might be writing the posts, and that’s totally OK, but if they’re appearing on the P-I’s website then the P-I has to accept some amount of responsibility. Obviously it makes little sense to only go after the P-I version of your blog and not the main site. But regardless of whether or not you’re right or Ryanair’s right, McNamara speaks the truth when he says that the P-I shares the blame.

The PI is not able to edit my blogs in any fashion, once they do, it becomes their property. They would have the ability to end my entire syndication, but nothing I wrote about would come close to that.

In this case, many major news organizations were covering this exact story in the way that I did. It wasn’t like I was just making up stories that had no foundation in truth.

I have had airlines email me on more than one occasion to let me know of a mistake I have made and I have always been more than happy to fix them. None quite like this :). Although I still fixed my mistake on their behalf.

lol, FR is fantastic, and McNamara has no limits. Millions of blogs are complaining about Ryanair, imagine if he would take time to send that kind of mail!

David, you have a very great blog and you don’t have to care about what Ryanair says.

Many news media, Wall Street Journal, Bloomberg, even the newspapers here in Hong Kong reach their own conclusions too, but did Ryanair send complaints to them also?

Seems pretty obvious that as head of communications he’s having trouble getting to grips with how communications work in the modern age. Long gone are the days where corporates could control the media. They may still have a handle on the big players – but now individuals have a voice that can be heard (I’ve had a similar run in with one myself and now a rather key search term points to me!)… Nice going David – keep it up! 🙂

I fly with Ryanair, the flights are cheaper than the bus to the airport I fly from Dublin to Nottingham regularly for less than Â£20 return including all Tax’s and I have not had any problems apart from a hilarious occasion when there were extra people on the plane!!! I like Ryanair, if only because they have made the whole European flight industry cheap, I also fly with BA who have old crappy planes and silly money wasting written all over them. I wish there was the option for other services to be ‘Ryanaired’ TRAINS for example in the UK cost a fortune, its well over Â£300 return peak time for a Manchester London return (its only 180 miles) I can fly for Â£20.