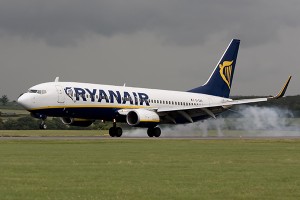 On Friday I posted an email I received from Ryanair. I very much enjoyed the email and the interaction with Stephen McNamara, Head of Communications with Ryanair.

In the comments of the blog, I was asked how I replied to his email. I thought about a long reply, but settled on just thanking him for connecting with me and that I have corrected my blog. I was kind of hoping he would read the post I made and oh boy did he!

Here is his (unedited) email I received on Friday morning:

While IÂ  contacted the Seattle pi I will not be keeping a line of communication open with your blog â€“ no disrespect but I simply donâ€™t have the time (or resources) to correct the errors most bloggers come up with â€“ but as you said, you have never flown with Ryanair so perhaps you are unaware that:

1.Â Â Â Â Â  They provide sub-par customer service (and are almost proud of it) â€“ Wrong. Ryanair has the best on-time record, the least lost bags and the fewest cancelations of any major European airline.

2.Â Â Â Â Â  charge for everything â€“ Wrong.Â  Ryanair allows passenger to avoid paying for any of the services that are factored into the cost of high fare tickets, the average fare with Ryanair (which includes a 25KG baggage allowance) is just â‚¬32 â€“ compared to the next cheapest airline at â‚¬60.

3.Â Â Â Â Â  fly to smaller airports.Â  Wrong.Â  In some cases we do, but we also fly to many main airports (e.g. Berlin, Edinburgh, London and Madrid etc) and passengers, especially those who travel frequently realise that it is more comfortable and quicker to travel through smaller airports â€“ while it also allows for cheaper fares which passengers would walk over hot coals to get to.

4.Â Â Â Â Â  but are one of the most popular airlines in the world â€“ Wrong (but almost correct).Â  We are the worldâ€™s favourite airline per IATA statistics which show that Ryanair carried more international scheduled passengers than any other airline last year.

6.Â Â Â Â Â  and are well known for almost never giving refunds. Wrong.Â  While our fights are non-refundable we do provide refunds in rare cases of weather related cancelation (per EU 261 legislation) and in cases where they are entitled to a refund of government taxes and charges.Â  However, if a passenger is looking for a refund because their cat/dog/grandmother is sick they are not entitled to one, and wonâ€™t get one â€“ per the Terms and Conditions they agreed to.

7.Â Â Â Â Â  Yet, they provide super low fares and passengers keep flying them. Correct â€“ almost, it should really say and an increasing number of passengers fly them â€“ Ryanair continues to grow thanks to our low fares while other airlinesâ€™ passenger numbers continue to collapse.

But I guess I can let you have that one – one out of seven ainâ€™t bad â€“ for a blogger!

Ryanair does â€˜understandâ€™ social media and that blogs are generally based on opinion (which is why we generally ignore them â€“ unless they appear somewhere like the Seattle PI).Â  Far be it from me to preach on new media but like good journalists good blogs should be balanced and at least factual â€“ if a blogger wants to blog about something by all means go ahead but if people are going to take the time to read a blog they should be confident that the blogger at least knows the facts and matches those facts with the entertainment value a blog provides.

Finally, re â€œI have updated my blog, but in my defense, major news organizations were covering this, like the BBC for example.â€Â  Ryanair was contacted by the BBC and provided a statement which was carried in the piece and explained the situation â€“ this however did not make it into your blog â€“ which is why we contacted the Seattle PI â€“ bloggers can not just take a story that entertains them and omit the facts â€“ as you clearly did in this case.Â  Major news organisations provided balance, when you picked up the story from their sites you ignored that balance.

Ha! 1 out of 7 or about 14% right (according to Ryanair). Surprised I got the “Ryanair is one of the most popular airlines in the world” wrong.Â  How about the most famous Irish airline in the US or at least on my blog? Now most of the rebuttals are questionable and I know McNamara is doing his PR job to put the positive spin on his airline.

Like I have said, I have never flown them before, so not sure how to respond to these. For those of you who have flown them, care to add your opinion on his email?

People like to kick them but they deliver a good service.

[…but are one of the most popular airlines in the world â€“ Wrong (but almost correct). We are the worldâ€™s favourite airline per IATA statistics which show that Ryanair carried more international scheduled passengers than any other airline last year.]

Semantics! Favourite? That is debatable, we all send money to the IRS each year, does that make the IRS the country’s favourite agency?? What a clever gotcha on the consumer complaint telephone line. The fact that they don’t have one says loads about what they think of the customers (they don’t have to care, after all, there’ll be another butt for that seat you’re not buying).

one last thing to ponder…how much does Ryanair save by excluding the second “l” in cancellation?

Now you’re getting a small feeling and frustrations of many if thousands of pilots/flightcrews “worldwide” hearing the rhetoric and “spin doctors” of airline management. Imagine being in the industry and hearing this type of “trash” from airline management on a daily basis.

What the hell is his response in #5? Geez…. get the paper cup and the string! “In writing only”….. just another pain in the butt method. What Customer Service?

Though our websites differs in approach, in some sense, your blog about Ryanair did exactly what we’re doing. You hit a “nerve” with Mr. Sensitive “Stevie” at Ryanair and he’s got his “panties into a bunch”.

Just feel fortunate that you don’t have to work under a company crony like “Stevie”, who’ll throw their own family under the bus (or in this case a B-737) for the sake of the company and moving up the management ladder.

I fly a lot between London and Gothenburg, Sweden and the only airline choices are SAS and Ryanair. Price wise, Ryanair wins every time. Getting to London Stansted (STN) well, that is a bit of a trek for anyone London but occasionally it is worth it. Staying that London flies out of London’s main airports, well, almost true. One thing that people tend to not mention when voicing concerns about Ryanair is their fleet which is very young and modern. I cringe every time I have to fly a MD80, even though Ryanair seats don’t recline

I conceive other website owners should take this internet site as an model, very clean and great user pleasant design and style .

McNamara talking about balance,,,,What a laugh….” bloggers can not just take a story that entertains” what about exploitation of young cabin crew david ? does this entertain…