What do you get when you combine writing about airline travel since 2008, with a few decades of being a sarcastic chap? Unsolicited Travel Advice from David (the Editor-in-Chief of this dog and pony show) — that’s what! There are way too many travel-related click-bait stories out there that give you boring and questionable information from “experts.” This series will be different — I will give you entertaining, possibly less questionable information, while not caring about any sort of clicks or bait. Let me set the mood. Imagine that you and I are hanging out (before all the COVID-19 stuff ), when we have just hit upon an interesting airline/travel topic (free first class upgrade) and I am fired up and ready to spew my thoughts and opinions. When I wrap up, I am hoping that you won’t just awkwardly stare at me, but instead continue the conversation in the comments. Let’s do this… 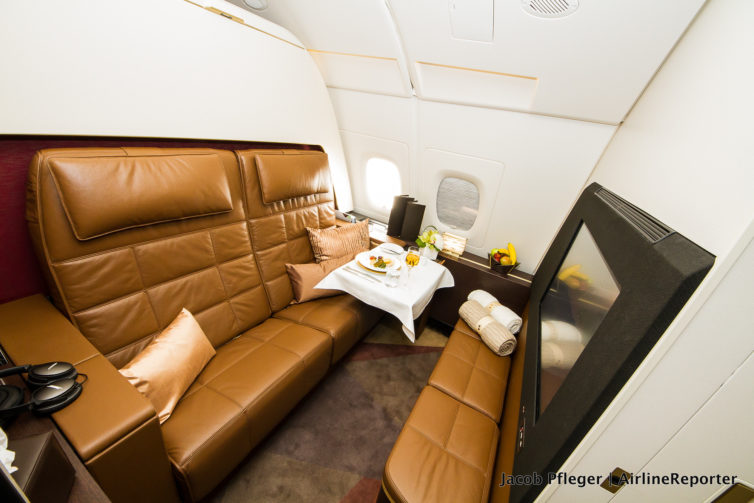 Now, that is what I am talking about — what I think about when I think “first class.” (this is on a Etihad A380)

HOW DO I GET A FREE FIRST CLASS UPGRADE?

This one is easy. You don’t. Conversation over.

“This is not what I was expecting,” you might be thinking to yourself. “I have heard about special tricks, some have to work, right?” Okay, okay, this wouldn’t be any fun if I didn’t at least talk about some of my favorite “tricks” that travel “experts” have given over the years. Or at least make fun of some: 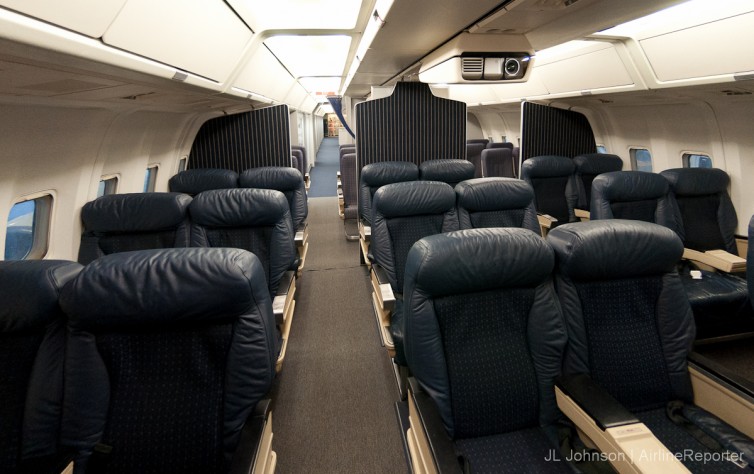 This classic first class is totally worth trying all the tricks in the book… it even has a sweet projector!

Those are all pretty worthless, but have no fear! I have 5 WAYS TO GET A FREE UPGRADE TO FIRST CLASS, that are 100%* legit. Keep reading to find out what they are (you won’t believe #4)…

My gate at FLL gave amazing views of my Alaska Airbus A321…. not!

I had no expectation that I was going to write this review. I recently flew down to Fort Lauderdale (FLL) to hang out with Embraer and they were nice enough to put me in first class. When I was preparing for my flight home (I flew on Delta to FLL), I saw it was on an Alaska Airlines Airbus A321. Sweet. I knew that I would either be flying on one of Virgin America’s old birds with their first class product, or Alaska’s new product win/win. I did my thing and looked up the registration number, found the delivery date of the aircraft, and determined that I was going to be trying out the new product. Heck yea.

One of the items on my AvGeek bucket list has been to fly international first class. I’ve had some wonderful experiences flying international business class (Air Canada 767, Lufthansa 747-8, and British Airways 777-300ER), but I’ve never had the chance for the best of the best. That all changed with this trip. I was already excited to be flying in first class, but I also unlocked another AvGeek desire: I was able to make the coveted “left turn” upon boarding the aircraft. When I have flown in a premium cabin previously, I have always boarded from the front left door. Sure, sure, there are benefits to both, but if you’re a passionate flyer, you can probably understand my excitement.