My gate at FLL gave amazing views of my Alaska Airbus A321…. not!

I had no expectation that I was going to write this review. I recently flew down to Fort Lauderdale (FLL) to hang out with Embraer and they were nice enough to put me in first class. When I was preparing for my flight home (I flew on Delta to FLL), I saw it was on an Alaska Airlines Airbus A321. Sweet. I knew that I would either be flying on one of Virgin America’s old birds with their first class product, or Alaska’s new product win/win. I did my thing and looked up the registration number, found the delivery date of the aircraft, and determined that I was going to be trying out the new product. Heck yea.

Transcons are like LAX to NYC, vs Diagcon being SEA to MIA – Image: GCMap.com

Okay… What is a Diagcon Flight?

So let’s talk about this made up word/definition I started using a while back: diagcon. You probably know about transcon flights right? Well, technically a diagcon is a transcon flight, but it’s longer, goes diagonally across the U.S., and I don’t like them much. I mostly use the term to describe my Seattle to Florida flights.

Over a three-year period, I found myself doing too many non-stop diagcons (for AirlineReporter, my dad lives there, other odds and ends, etc.) and I was getting sick and tired of doing them in single-aisle aircraft. Sure, the SEA-MIA flight might only be 30 min longer than a LAX-JFK flight (or SEA-JFK), but that extra 60 min (roundtrip) in the back of a 737 made me find the point where I actually wasn’t looking forward to the next diagcon flight (I wasn’t sure if I had that limit). So, for me, the definition is not just about flying diagonally, but also getting kind of tired of the routing / (lack of) aircraft choices.

So, how is this relevant to the story? Good question, and thank you for getting me back on track. We can conclude that I am not a huge fan of flying diagcons, and I was tired, so this really was the best combo to put this product to the test. Let’s continue… 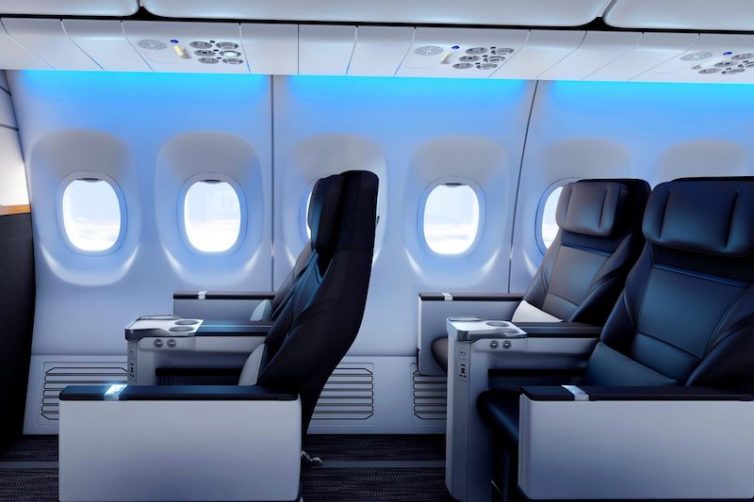 Being based in Seattle, I fly Alaska quite a bit. It is the airline where I hold my miles, although I have never held status (I know, crazy right?). The vast majority of my Alaska flight experiences is in the back of the plane… in economy. Although it is always nice when I’ve had the chance to fly first class on Alaska, I have to say that the old hard product isn’t super special. You have the wider seat, with the 2-2 layout, and a good meal, but the tight seat pitch always shocked me. Unless I got a super duper upgrade deal (I don’t think that is their official name), then I didn’t see the value in spending the extra money to move up to first class. I was wondering if this new product might change my mind. I broke it down the pros and cons in easy-to-read bullet points: 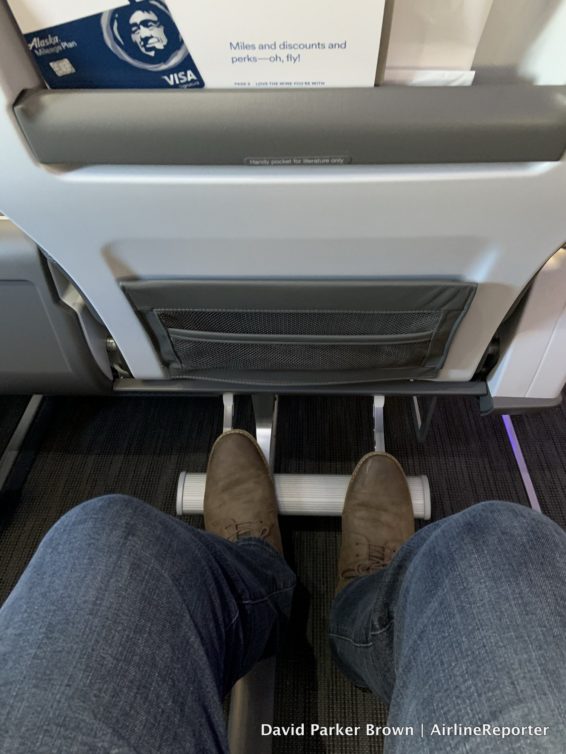 What I liked about the new Alaska first class 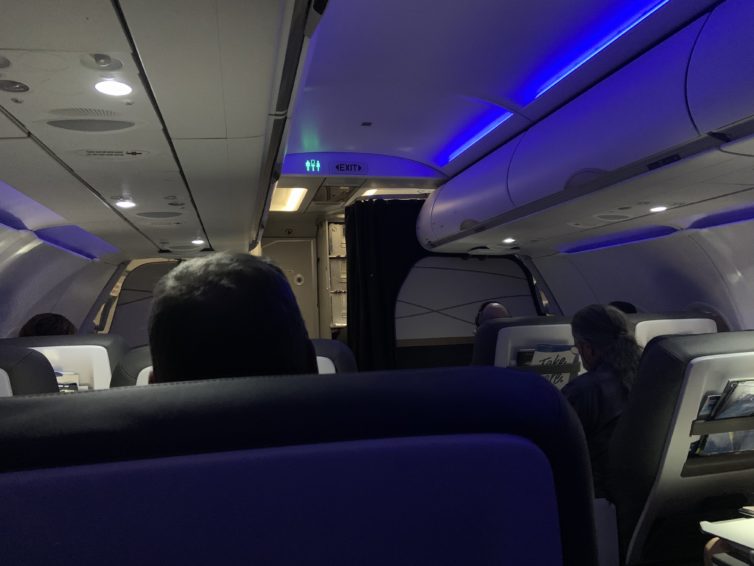 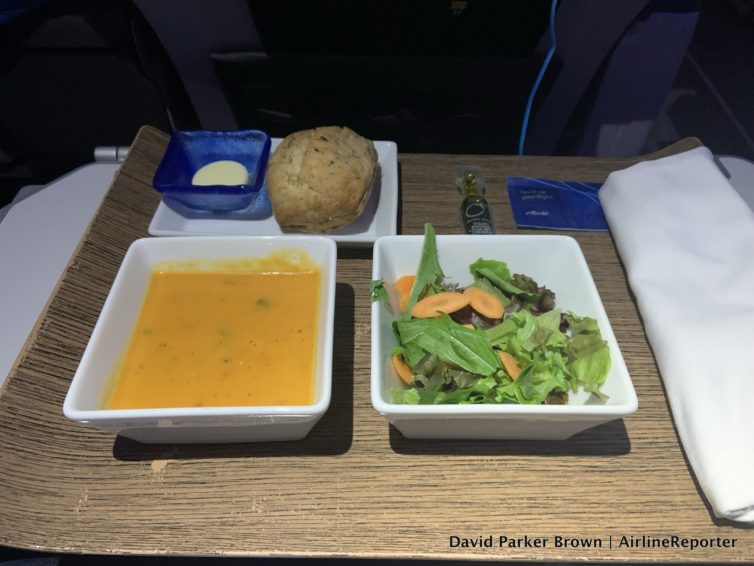 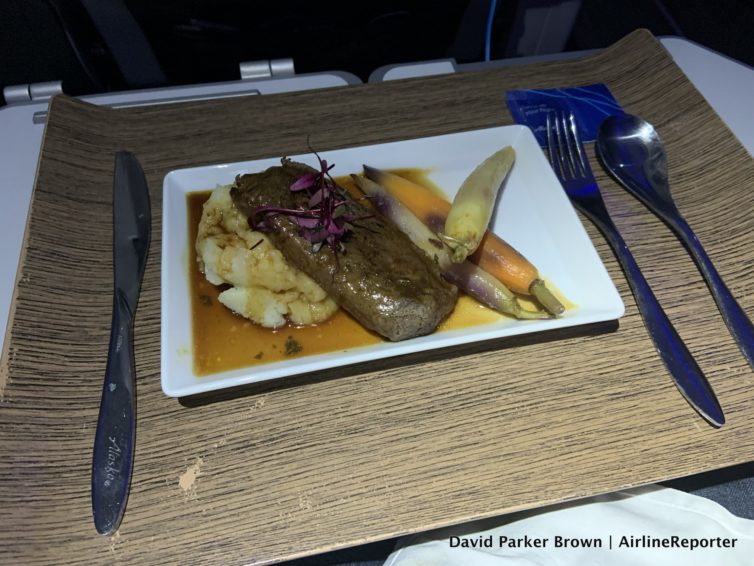 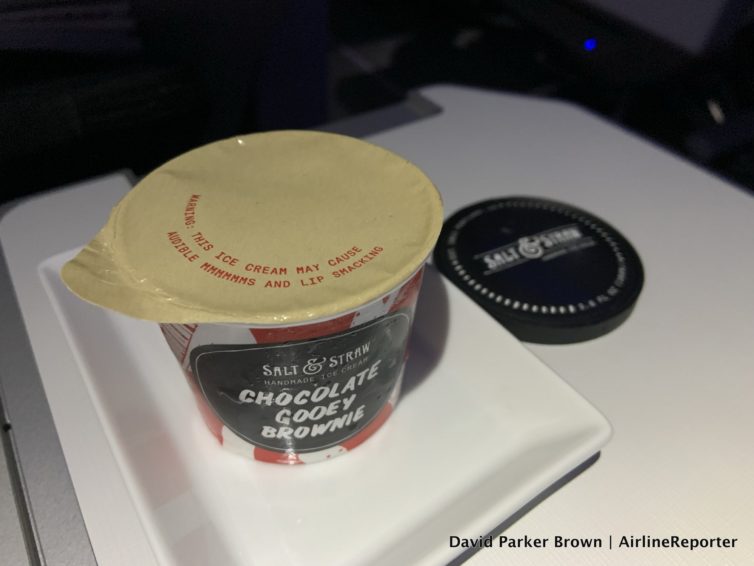 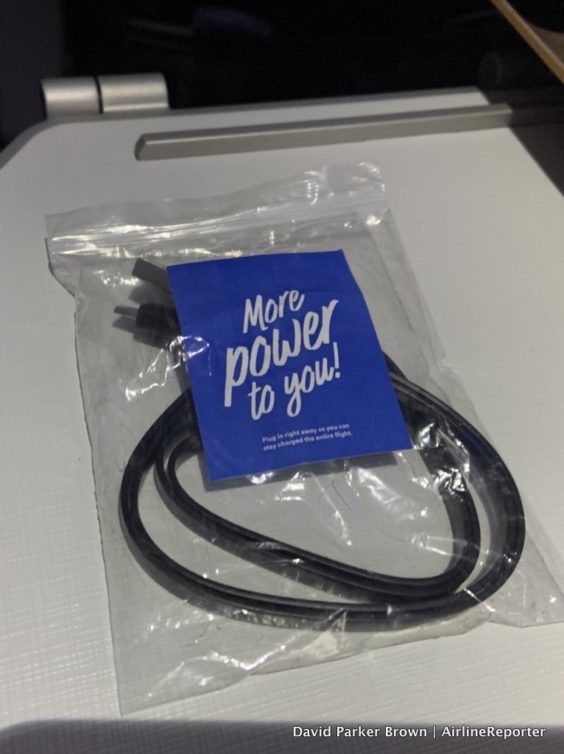 Power cord for the entertainment device 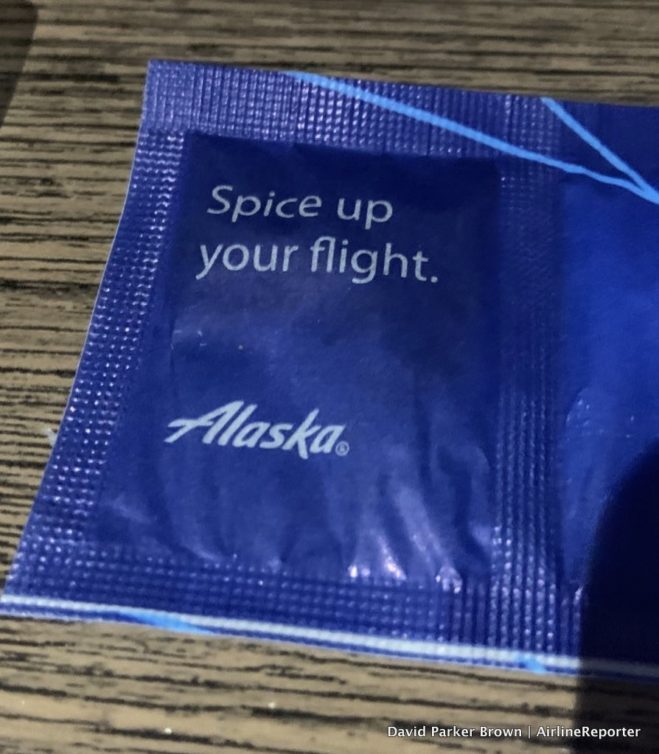 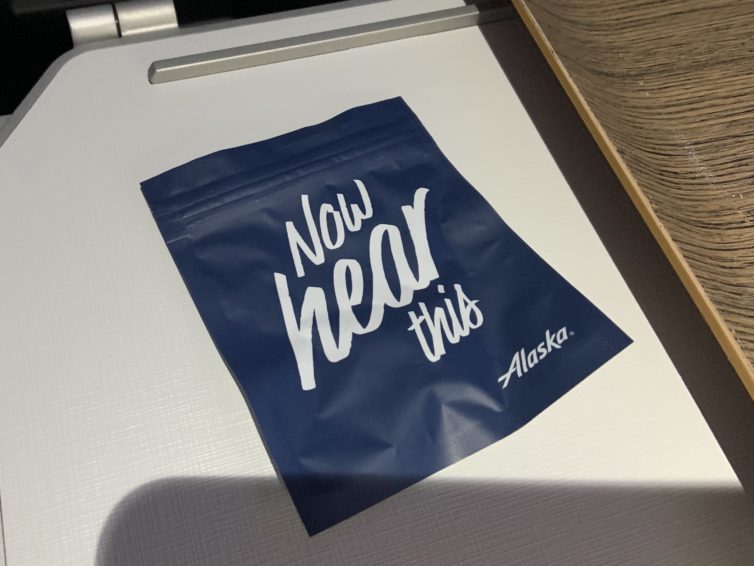 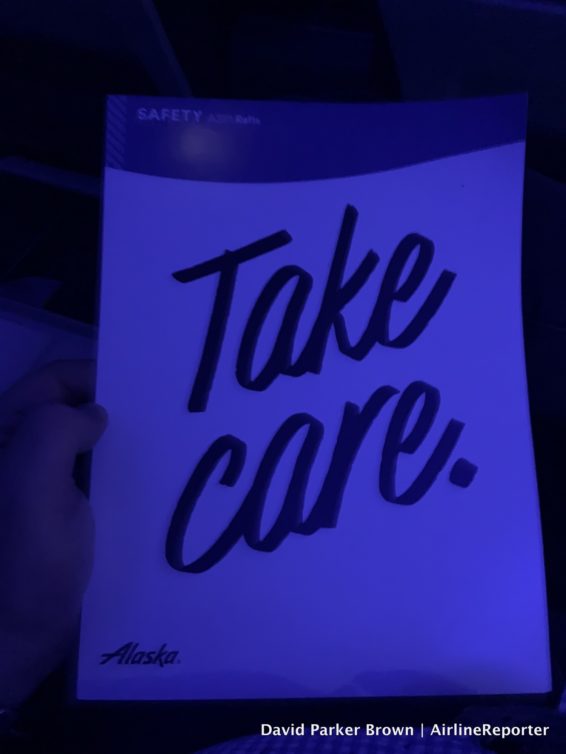 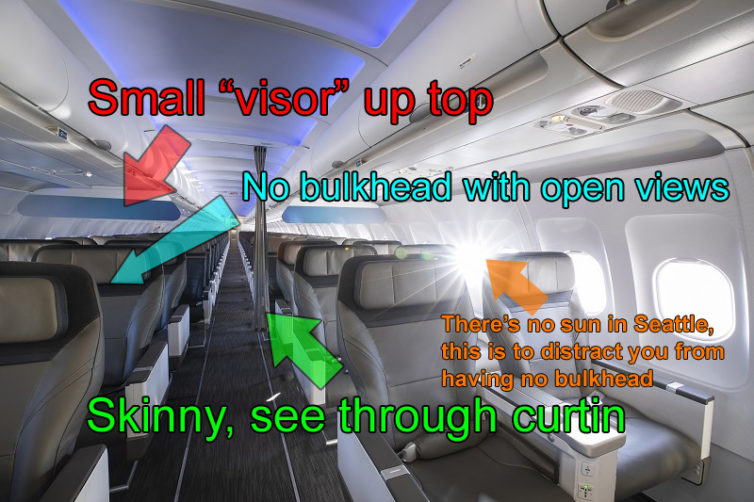 What I disliked about the new Alaska Airlines first class 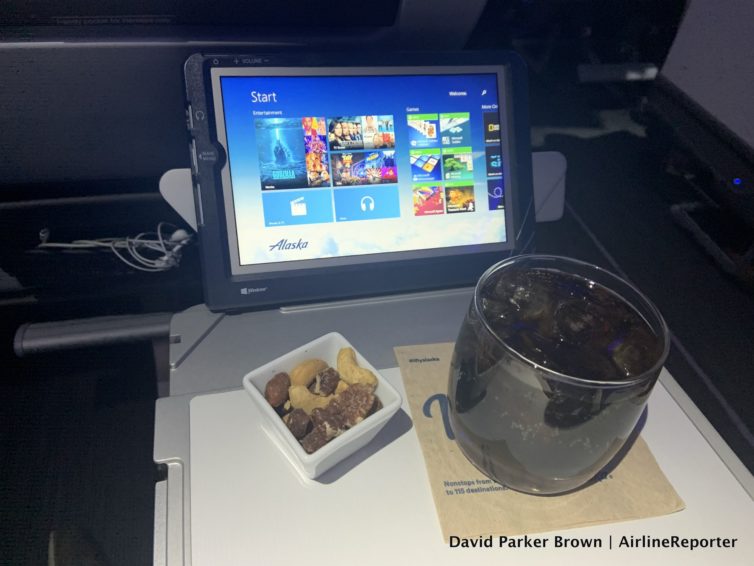 The device from the airline looks cool, but I didn’t find it easy to use. The holder on the tray table was nice though! 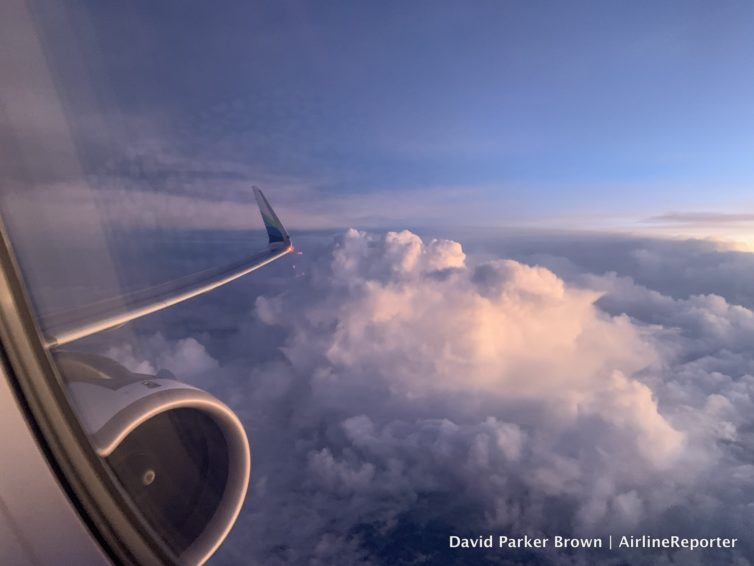 How Does the New First Class Stack Up?

Alaska’s new first class product (hard and soft) is very impressive. In my previous story on the product I questioned how much of Virgin’s influence might be found in the new Alaska and no matter how you feel, I think you will like what you find. I think this is really an “evolution-plus” of the previous product. It is more than just a simple refresh, or updating of textures/colors, but they are providing a leading product. 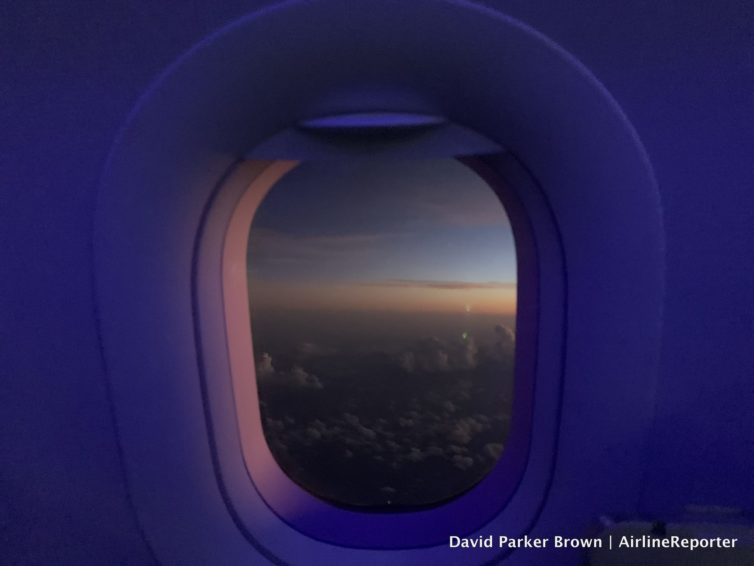 Although I didn’t have a window seat, my seatmate was nice enough to let me snap a few window pics

If you weren’t concerned about miles or status on either airline and just looked at the soft/hard product, overall I would choose to fly the new Alaska first class over Delta’s — no question (you also get access to Alaska’s lounges, which is a huge plus).

I think the biggest issue is consistency. You know what you will get on almost any Delta domestic first class product. Fly on an MD-80, a CRJ-700, a 737, or a 757, no matter when they were built, they are going give pretty much the same passenger experience (which I think they do a wonderful job). With Alaska, they have about 50 of their 71 Airbus converted and when asked they told me that they are “still discussing plans for the 737-800/900 fleet interiors.” That means, it might be a challenge (even for you AvGeek pros) to ensure you will be flying with the new first class.

Fleet change doesn’t come easy, nor happen quickly (especially when Alaska has over 30 737 Max, that are delayed). Once Alaska is able to update their fleet, and provide a consistent first class flight experience, they will be in a much better competitive position. Not to say that they aren’t too bad now, but if they wait too long for the fleet-wide upgrade, that just gives the competition more time to come up with their own improvements. 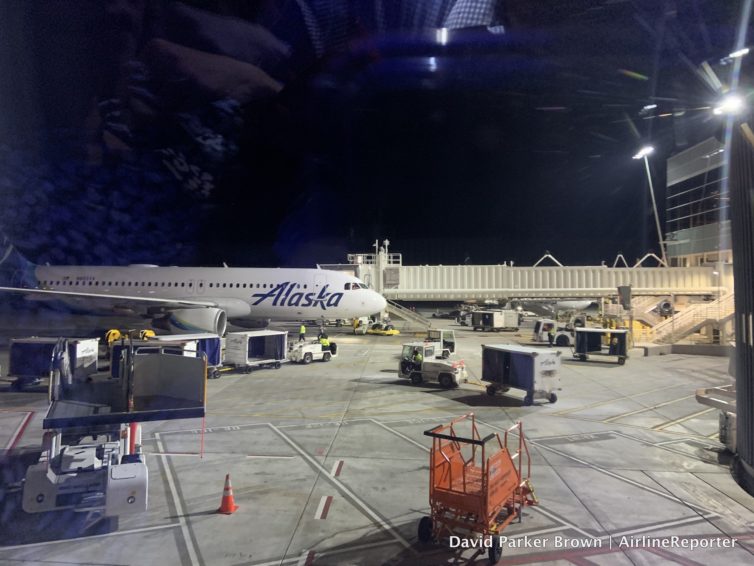 Not the plane I was on, but one that looks a lot like it. You AvGeek pros will know the big difference.

Have you had a chance to fly it yet? Or even have some thoughts about the older product and how it compares to the competition? Leave your thoughts in the comments!

https://www.airlinereporter.com
Learning to Fly: Icelandic Piper PA-28 Cherokee Edition
Where is the Safest Place to Sit in an Airliner? – Unsolicited Travel Advice
10 Comments

Send me some of the spiked juice you”re drinking that makes you declare Alaska”s Airbus product is an improvement over Virgin. Already choked a couple of times. AS could put toilets in first and you”d lap it up.

I think I would probably not be a fan of all toilets :). But seriously, thanks for commenting and obviously you are passionate about Virgin America. Even though I am based in Seattle and have my main mileage plan with Alaska, I would often fly VX, just because I enjoyed the different experience. No question, I think that the VX first product was better than the current Alaska first. With the Alaska’s new first product, I really think it would have been about the passenger’s preference. Unfortunately passengers just don’t have that choice anymore :(.

When I took the flight, I looked at the product not as a replacement for Virgin America, but for how it compares to Alaska’s current product and the competition. I was also trying to notice the details that weren’t there before the merger (aka VX’s influence).

If VX fans haven’t already, I encourage them to give the new product a try. It’s not going to be Virgin America (no airline will ever be able to replace them), but I think passengers can see it is a very solid domestic first class product.

Nothing better than ice cream at 38,000 feet

Flying often already brings out the inner-child in me. The excitement of flight and travel. But then you add ice cream to the mix and game over. I am 39, going on 7, and I am totally okay with that!

Was on AK SAN-KOA last week, not new seats, but had the notebooks. About half had issues of not being charged, or had parts falling off, then others couldn’t figure out how to use them.
I always pre-load my notebook with plenty of stuff, so never need them.
I’d say get rid of them.

I will admit that my first draft on the devices was much more aggressive towards Alaska getting ride of them (I wrote it while on the plane). But I figured there must be enough of a demand from other passengers to justify them? I hear more stories like yours than people saying that they like them… so, I am not sure.

I live in Chicago so my airlines are usually AA or UAfor better and worse. But I enjoy reading about airlines, airplanes and reviews from people like you. It”s my little escape now that I don”t put on the miles for work and fly like a maniac. And I truly enjoyed your flight report.
Butif you are going to publish for the world to read, it”s a good idea to use proper grammar or just get a proofreader.
I”m sure you could easily find one. Or hire me. I”ll do flight reports too.

We are always happy to add new voices to AR. Every writer started by emailing me with an idea and a passion for airlines. I am going to email you about the grammar issues — I want to make sure that those are fixed. I will say that I edit the stories a few times myself and then we have a final editor take a last look before publishing, but that doesn’t mean we don’t make mistakes!

Thanks and chat here soon!

Hi David. Thanks for the timely reply. I’m impressed with your punctuality. Honestly I don’t know how to point out errors without doing a lot of cut and paste. If you want me to do that I can. (I just saw your last post where I think you wrote “ride” when you wanted to say “rid.” Typing on a phone and predictive text make it very easy to make a typing error.
Peter

Great story David! I”ve been wanting to catch a ride on a new AS 321, so I lived vicariously through you on this review. Cheers!