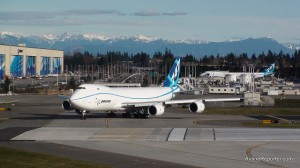 Not that long ago Boeing entered into the world of social media and I wanted to take a moment to see how it is going.

I decided to speak with Todd Blecher, Communications Director at Boeing based in Chicago, and Bernard Choi, who works for the Communications Department for Boeing Commercial Airplanes in Seattle, to hear their take on Boeing’s progress.

When I asked Blecher if he felt their efforts have been successful he responded with: “I look at success on two levels. The first is whether we consistently generate appealing digital content. The reactions we’ve received since we started using Boeing.com as a storytelling platform and engaging through Twitter lead me to believe that we do.”

Blecher admitted that he wished their numbers were a little higher for the unique content they are creating on their website, but they were very happy with how their efforts at Farnborough turned out. “Our Farnborough micro site was a watershed moment, coming just a few months after we began communicating differently through Boeing.com,” Blecher stated. “We attracted 103,710 visitors who made more than 225,000 visits and 222,300 views of our videos. That was remarkable for us. I’m very proud of that effort.” 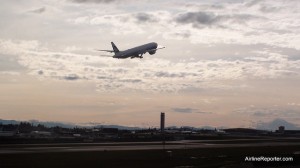 I have found that a lot of companies don’t know how to make Twitter work for them. Many will have a Twitter account because they feel they need one, but they don’t know why. Talking with Blecher, I can tell he gets it. “Social media’s value rests in allowing organizations to engage in a dialogue with people around the world that can benefit both sides of that equation,  and do that at very low cost,” he explained. Boeing is not on Twitter because they want to look like they are in-touch, they are on Twitter because they want to change how they communicate to the outside world (being media, airlines and fans like you) permanently and more effectively, using technology. 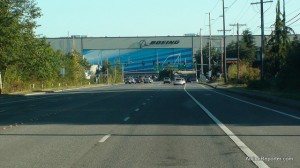 He did clarify that if a Tweet is program related (ie what the 787 might be doing), they will speak with people in that department to make sure they have accurate information. On rare occasions there might be longer discussions before a Tweet goes public.

Choi explained that he might confer with a colleague, but he has the ability to use his judgment when to make a Tweet go live, “I’ll bounce ideas off of my colleagues, but there isn’t an official approval process.” There is a lot going on at Boeing all the time and it can’t all be Tweeted. I asked Choi how he gets his information, like when Randy Tinseth posts a new blog, does he get a heads up? He explained that sometimes he might, “get a heads up that Randy’s got a new blog coming or I’ll just wait like everyone else. I don’t tweet every blog entry, just as I don’t tweet every Boeing news release. It’s fairly subjective. We don’t want to overtweet, so we look for the highlights or just interesting nuggets to tweet. As you can imagine, we’re still learning as we go.” And Boeing has been learning.

Let’s take a look at what happened just last night. Boeing knew it was going to have to announce that the Boeing 787 will be delayed again. They posted their press release and Tweeted out the delay pretty much at the same time. Even though there were rumors that Boeing would release this information, they were the first one on Twitter to have the official confirmation. It was about another 15 minutes before other Twitter people responded to their original Tweet. That is being proactive and not everyone would be willing to Tweet out bad news like that. 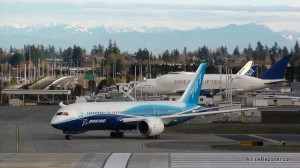 Boeing has learned a lot from their interactions on Twitter, from posting online media and their Boeing Store Facebook account. They are hoping to use that information to continue to grow their online presence.  They hope to launch an official Boeing Facebook page (there is currently an unofficial one with 30,000 fans) and YouTube channel to share videos with the public and believe me, they have some really cool stuff.

Speaking about cool stuff, Boeing is still hip with the idea of having a TweetUp sometime. That is where a bunch of airline nerds like us (don’t take offense to that, just figure you might be one if you’re reading this) get together and talk about airplanes and do some cool things (there was one last year called Aviation Geekfest). One sponsored by Boeing won’t happen soon (there is a lot of red tape), but they are motivated to try and make it work someday (And I will continue to keep reminding them).

They are currently happy with the progress they have made, yet are still cautious about growing their online presence too quickly. “With any of these tools we have to walk before we run,” Blecher explained. “We’re far ahead of where I expected we’d be and while I’d love for us to be moving faster, I realize that trying to move too fast could put our efforts at risk. A couple of high-profile mistakes in the social sphere could really set us back.” That is a very wise approach to take. Many airlines have hopped on to the online bandwagon with great momentum, just to fizzle out with time and leaving people wondering what happened. You also don’t want to be venturing into new technology without fully understanding the impact it could have on your business or your customers.