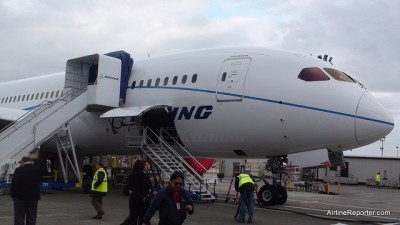 Boeing tonight announced another delay in the 787 Dreamliner program. Normally this means comments on new sites will fill with frustration on Boeing inability to get this plane to market. I have some opinions of my own, but before I give them, here is the press release that Boeing released tonight:

The Boeing (NYSE: BA) Company said today that it now expects delivery of the first 787 in the middle of the first quarter 2011.

The delivery date revision follows an assessment of the availability of an engine needed for the final phases of flight test this fall.

While Boeing works closely with Rolls-Royce to expedite engine availability, flight testing across the test fleet continues as planned.

Boeing said last month that the cumulative impact of a series of issues, including supplier workmanship issues related to the horizontal stabilizer and instrumentation delays, could push first delivery of the 787 a few weeks into 2011. The delay in engine availability has extended that estimate to mid-first quarter 2011.

The schedule revision will not affect the company’s financial guidance.

Of course this is something that Boeing is not happy about. Heck it is something I am not happy about either. The 787 has already been plagued with delays. The first issue, in my opinion, was that Boeing made a timeline of completion that was too aggressive and unrealistic. Then we get the workmanship issue with the horizontal stabilizers that wasn’t good and also the more recent failure of a Rolls Royce Trent 1000 engine. However, I feel all these delays will easily be forgotten shortly after the Dreamliner makes it to the market. Remember, this is a very complex aircraft that represents the next generation of airliners.

When Boeing first introduced their first jetliner, the Boeing 707 it was easy to tell it was a totally new type of airplane. It looked unique sporting jet engines instead of props. I feel that the Boeing 787 Dreamliner, like the 707, is the next generation of airliner of its time. I think people have a hard time realizing that, since it doesn’t look all that different from current airlines. Boeing is not the only one experiencing delays building the airplanes of the future.

As Airbus continues to work on their next generation airplane, the Airbus A350, they are not immune to their own delays.  Flight Blogger is reporting that the first delivery of the A350 will be delayed until at least 2014. It is still very early on in their process and even though they have learned a lot from Boeing’s delays, I assume this won’t be the last delay for the A350 we will hear about.

Creating the next generation of aircraft is not easy. It has taken some of the best minds in the world at Boeing and Airbus to move both of these programs forward. With with all the know-how, money and drive to succeed, there will be bumps in the road. Previous airliners have seen delays as well through out history and most of those delays are quickly forgotten.

This makes me very sad that I will have to wait a few more months to see the first Boeing 787 in ANA livery carrying passengers. But I tell you what… the first time I am able to fly in a Dreamliner, it will be totally worth the wait!

Shout out to Jon @ FlightBlogger for following this story.

I know you’re waiting with anticipation. But instead of feeling sad about it, it’s probably better to just accept that this is necessary. They’re doing the right thing.

We’ve seen it coming for a while that the 787’s updated schedule since 2009 appeared realistic if not much went wrong. Well, some things went wrong. And in every significant engineering effort, you can count on that. You can plan definitely for what you know. You can even plan for some things that you know you don’t know all the details, the “known unknowns”, even though there’s less certainty in those plans. And then you have to leave some schedule padding for the “unknown unknowns”, the things you aren’t yet aware of but you know Murphy (as in Murphy’s Law, “if anything can go wrong, it will”) is going to throw at you. Then you have to hope that planning was adequate. There’s always pressure to get things done as soon as possible.

The Airbus A380 had a painful 2 years of delays. The Boeing 787 is experiencing over 2 years. As an engineer, I can see hindsight tells us neither company allowed enough time for the problems Murphy threw at them. But anyone who had tried proposing a schedule of what we now know would have turned out to be realistic, would have been fired. Both companies were in states of denial sticking steadfast to their original schedules until they couldn’t any more. Both companies have fired people over the delays. It’s tough to develop something new.

Meanwhile, people who only hear about this from the media have to depend on being told the whole story. And they rarely get enough info to grasp it. If you just see delays, you don’t get the sense that they’re doing this out of decades of lessons learned the hard way. This willingness to accept delays to do what has to be done is part of what makes aviation so safe today. People need to accept that this is what reality has thrown at us. Boeing’s 787 program still appears well on track to deliver the planes to its customers just like Airbus eventually did with the A380.

I have a number of reasons why I’m also looking forward to seeing the 787 enter service. As an aviation enthusiast, I understand the technical achievement of scaling up the time-proven composite airplane to a wide-body airliner. Actually, I’m still looking forward to seeing a 787 in person. And where I live in San Jose, California (a.k.a. Silicon Valley), we’re looking forward to the 787 because it’s the perfect plane to restore transoceanic flights to our airport. We used to have daily American 777-200ER nonstops to Tokyo Narita until the economic downturn in 2008. So hopefully ANA is looking at SJC for their initial 787 routes from Tokyo Haneda. The 787 can fly nonstop to anywhere in the world from here. We have the runways, terminals and population to handle it. We just have to compete with everyone else who wants 787 service…

The 787 will certainly prove to be one of those developments which makes the world smaller, once there are enough of them in service.