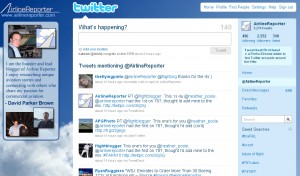 I know I talk about Twitter on my blog quite a bit. I get a mixed-bag reaction from people about what Twitter is and how it works. I use it a lot and link to quite a few interesting stories and photos that I do not share on my blog or on my Facebook.

For those who haven’t stepped into the world of Twitter or maybe you have, but got confused with all the Twitter talk, let me try to help. If you have absolutely no interest in Twitter or learning about it, go ahead and skip this blog.

So what is Twitter? Well, it depends on who you are and what you use it for. If you have a personal Twitter, you probably are going to use it differently than a business one. I use my Twitter to #1 share interesting stories I find that I might not blog about #2 Let you know real-time what I am doing, if I am doing an aviation-related event #3 Connect with airlines, others who write in aviation, and my readers in a way I cannot do with other mediums. If you use Facebook, Twitter is a lot like your status updates. If you don’t use Facebook, Twitter is like a blog and instant messaging that mated and had kids. If you don’t know what blogs or instant messages are, I don’t think I can help :).

The fun part is, unlike blogs or Facebook status updates, you only have 140 characters to make your point, so long-winded folks need not apply.

If you have tried out Twitter you might quickly get confused with all the @ and #’s you see everywhere. It took me a while to get used to it, but after a little practice, it works. I will just keep this simple as if you are just trying to read my and other people’s Twitter feeds.

THE @ SYMBOL:
This is used before a user name to talk about or to someone. I am @AirlineReporter on Twitter. Let’s say you see me Tweet: “hey @danwebbage, I enjoyed meeting you the other day.” That means I am talking to Dan Webb on his Twitter account. He is able to see any message that someone mentions him in and even though I am talking to him, you can still see the message. Let’s say you found this cool airline story and want to share it with me. You could be like, “@AirlineReporter I found this cool, story, what do you think? www.coolstory.com?”

THE # SYMBOL:
The hash sign represents a topic. So let’s take the Farnborough Air Show happening soon as an example. Anyone talking about that topic will put a #FARN10, so if you want to see what anyone is saying about it, you can look it up. For example, recently I did the Virgin America new flight from San Fransisco to Toronto. Anyone who was talking about that experience used #VXToronto.

You do not need to create an account to read Twitter, but it sure helps. By creating an account, you are able to add people that interest you onto your friend’s list (that is my friend’s list) and see what they are Tweeting. When you get a little practice you can create groups. Like I created a group of airlines on Twitter that I will look at to see what they are Tweeting about. If you do create an account, it can be totally anonymous, all of Twitter can be anonymous if you want. You decide what information you let people know about.

It is ok if it is confusing at first. It took me a few months to get the hang of it and longer than that before I even know what the #-tag was for. After a while youÂ get used to itÂ and really use it as a resource to see what is going on in the world and connect to people and companies in ways you never have before. You can read about your Aunt Frannie feeding her cat and even hear about awesome travel deals, all in one spot. And I will tell you what…if you run into trouble or have any questions, go ahead and ask me and I will see if I can help you out!

Ok, if you will excuse me, I need to Tweet about this blog now!

Hi! Check out El Al’s twitter @ELALUSA and also our blog at http://www.skywordswithelal.com/
I hope you enjoy!