Flying over Reykjavik in a PA28

The flying weather continues to be dismal in Seattle – I’ve lost track at how many training flights have been canceled due to low ceilings, low visibility, potential icing, etc. – I stopped counting after 14. Even by Seattle standards, we’ve had an exceptional stretch of bad weather this winter.

However, during a recent trip to Iceland with Icelandair (watch for upcoming stories about their maintenance operations, fleet and route plans, plus an economy-class flight review), a series of fortuitous introductions led to my being able to do something I’d only dreamt of – fly in Iceland.

That experience more than made up for all the weather-based frustration with my stalled Seattle flight training.

The Piper PA-28-151 Cherokee Warrior we flew that day

It happened like this: I’d asked Michael Raucheisen, Icelandair’s communications manager for North America, if he knew anyone who was willing to take a student pilot for a spin, even if just in the pattern at Reykjavik airport (RKV/BIRK).

He made a couple of calls, and the next thing you know, I was connected with Valur SigurÃ°arson, a furloughed Icelandair 737 MAX pilot. When I tried to thank Michael for the connection, he said that it wasn’t him, it was Iceland that did it – he says you’re never more than two or three people away from getting something accomplished, as it’s a tight community and people like to help out. Regardless, I’m grateful for his help.

We flew Valur’s Piper out of RKV, which is on the southeast side of the city; commercial flights use Keflavik International Airport (KEF), about 20 miles southwest of the capitol city. Not only did I get to fly the plane, I got to make a new friend. Especially now that I’m closing in on being a pilot, I’m discovering that the aviation community is an amazing family.

Even better, this was a plane I’d never even been in before, so the whole experience was that much more fun. The Piper was a dream to fly – easier in some ways that the venerable Cessna 172s I’ve been training in back home, especially when it came to trimming the plane in a climb or straight-and-level flight. 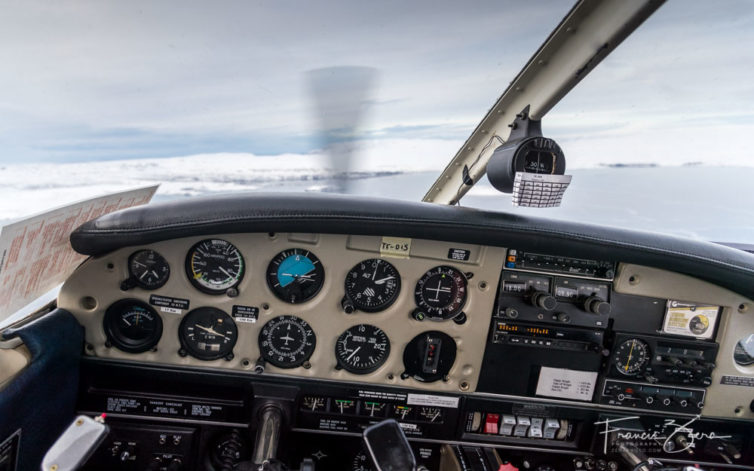 The view from the cockpit over Thingvellir national park

Valur let me take the controls for pretty much the whole flight – we did the pre-flight and briefing, then I did most of the taxi, run-up, takeoff, and cruise flight to Lake Ãžingvallavatn, which is adjacent to Ãžingvellir national park, which is the rift valley separating Europe from North America. It’s located about 40km northeast of the city. 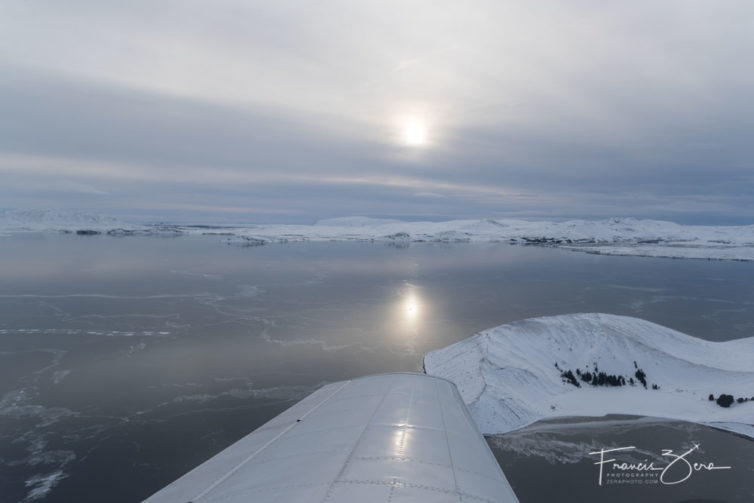 As my goal was to, you know, fly, there aren’t very many photos. I wanted to soak up the experience as much as possible.

Along the way, Valur ran me through some familiarization exercises with the plane, things such as turns and a power-off stall, so that I’d be more comfortable with the controls. He took care of most of the radio work, as I was unfamiliar with EASA radio protocols, although I discovered that they don’t differ much at all from FAA rules.

Interestingly, Valur explained that, as soon as someone speaks English on frequency at BIRK, everyone else on that frequency is supposed to switch to speaking English to avoid any language confusion. That was a good thing for me, as I speak absolutely no Icelandic. The airport’s tower controller was easy to understand despite his accent, so the experience in that regard was also great.

Icelandic pilots, he said, are well-versed in dealing with turbulence, especially of the mountain-wave variety, given the country’s crazy topography. That said, other than a couple bumps near one of the peaks we passed, it was a really smooth day.

I learned a lot about a different type of airplane and about Icelandic airspace, but, best of all, discovered that my flying skills are a bit better than I’d been giving myself credit for; Carl (my Seattle-based Certified Flight Instruction — CFI) had really set me up well for this.

I greased most of the landings (we did a couple laps around the pattern at the end of the flight), even though the runway was contaminated with a bit of snow and ice â€” I had awesome coaching from Valur in that regard. 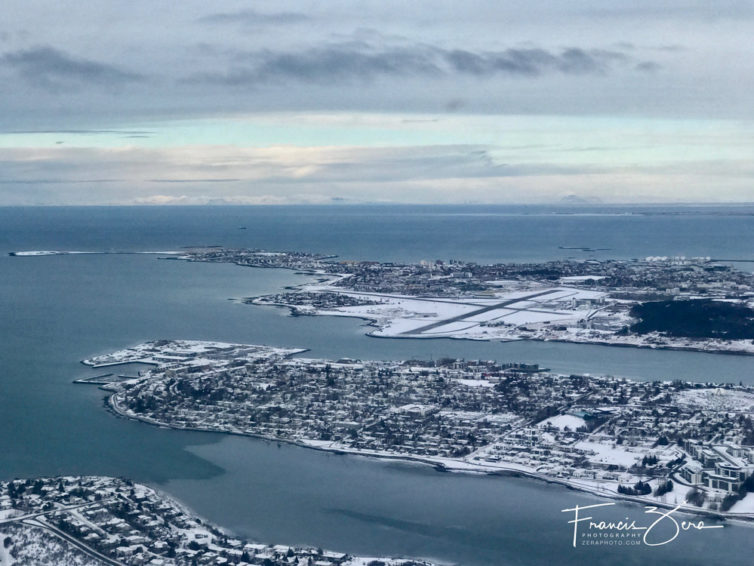 On the downwind leg to runway 13 at Reykjavik Airport

After getting back home from that incredible experience, I was stoked for my next attempt at my cross-country training flight, scheduled for the day after my return. True to form, we had to cancel due to poor weather.

http://www.zeraphoto.com
Boeing Bets All Sevens, Hoping for a Win!
A Diagcon Look at the New First Class on an Alaska Airlines A321
4 Comments

Wow, what a wonderful article Francis. If only I could count how many times I have flown small airf=craft to and from BIRK (using Microsoft Flight Simulator). To go there for real has always been a dream, to fly myself there would be bliss.

Don’t get depressed about the Pacific Northwest weather. The sun will come out from time to time and you’ll be a better pilot at the end of it all.

Thanks for reading, and for the encouragement!

It really was like a dream come true, flying from BIRK. The conditions, scenery, and company were all outstanding.

Very cool! But what was up with that attitude indicator?

The gauge was inop – itâ€™s preferable that it be working, but itâ€™s not required equipment for VFR flight conditions.