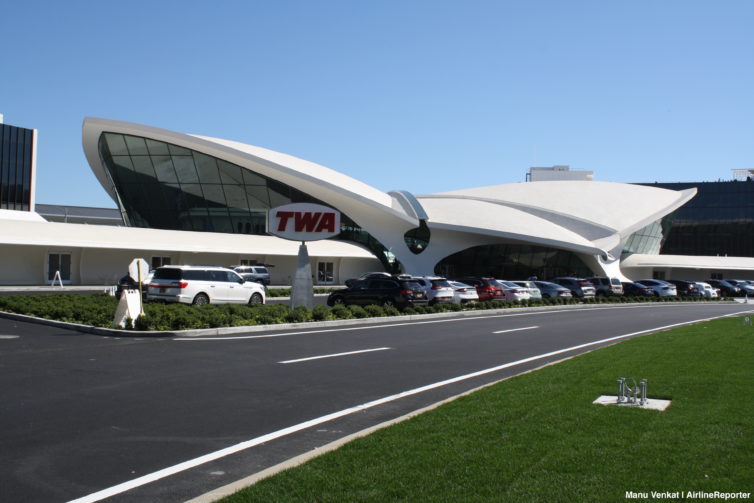 The approach to the TWA Hotel at JFK

The TWA Hotel incorporates the head house of the TWA Flight Center, which was inaugurated all the way back in 1962 and has survived thanks to its historic landmark status. It’s now surrounded by JetBlue’s T5. 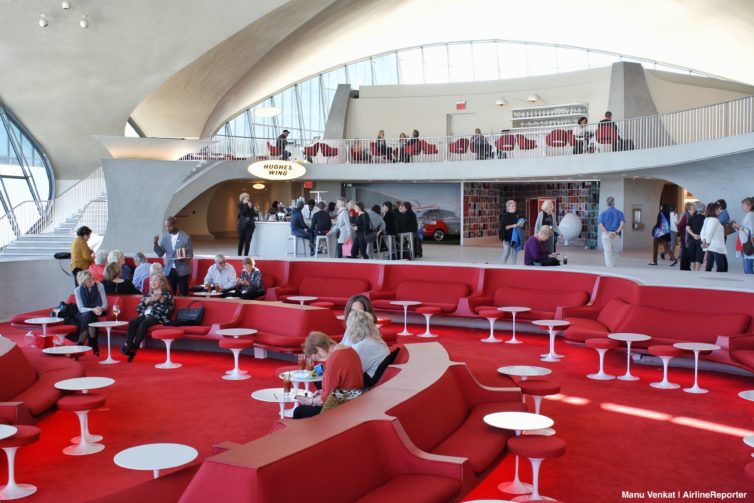 The developer behind the hotel did an INCREDIBLE job reviving the long-abandoned building to its former glory. Don’t worry — we’ll have a follow-up story with a deeper dive into the hotel.

BONUS: Wings of Pride -Â  A TWA Plane That Was Nearly Forgotten

In addition to all the historic memorabilia that the Silver Wings team put on display for the weekend, the hotel itself is packed with displays of TWA heritage items like flight attendant uniforms and old TWA ads. 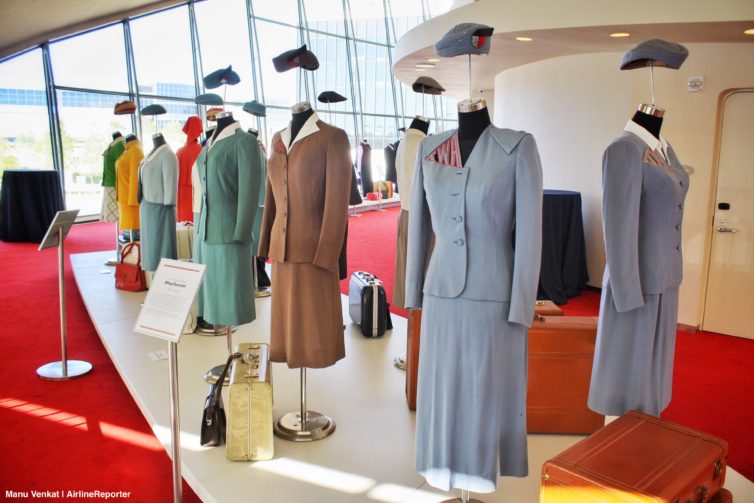 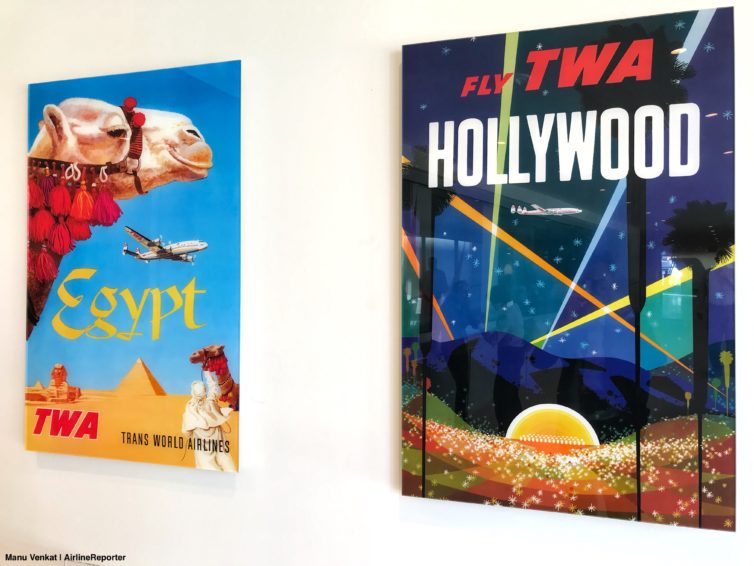 But the clear champion out of all the legacy displays is the gorgeously renovated Lockheed “Connie” Constellation just outside of the hotel. 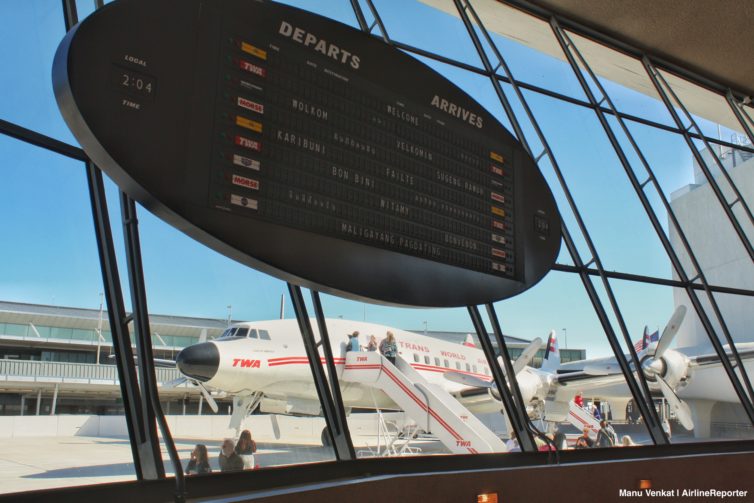 So it wasn’t a surprise that Silver Wings chose Connie as the site of the weekend’s big photo op.

All told there were almost a thousand attendees who made it to the weekend, and a good chunk of them took part in the group photo. 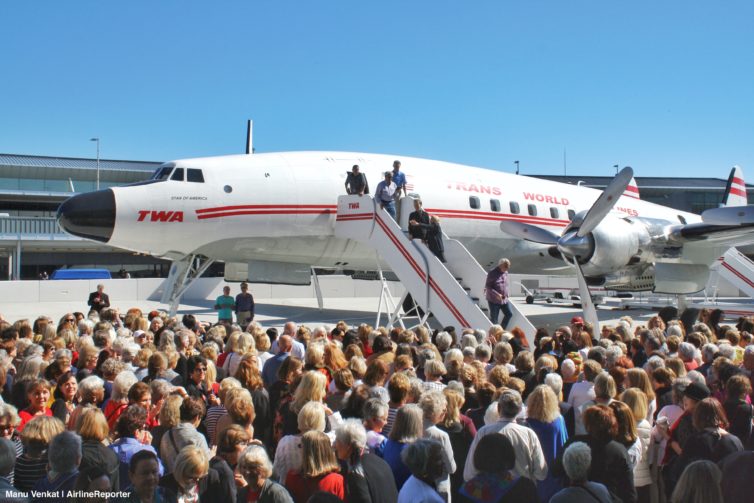 BONUS: Flight of the Connie – The Incredible Story of the Star of America

After the photos, some of the attendees grabbed a drink inside Connie. Yup, you heard that right; the hotel turned the inside of the plane into a fully functional bar. 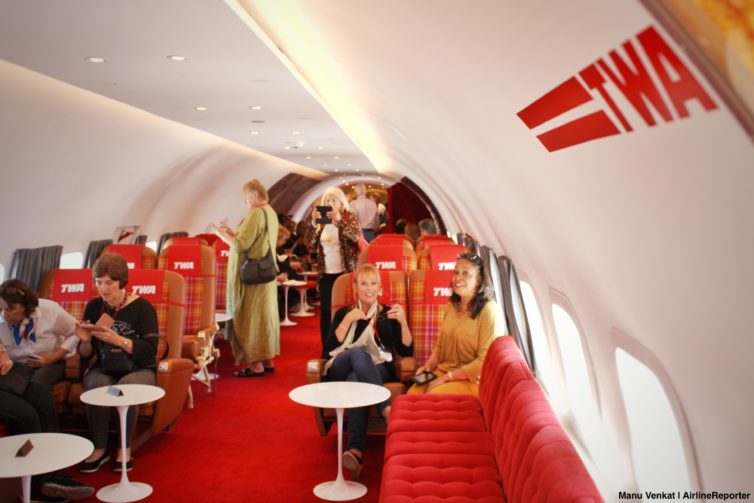 Inside the hotel’s conference room, Silver Wings had a number of displays on the organization’s — and the airline’s — rich history. 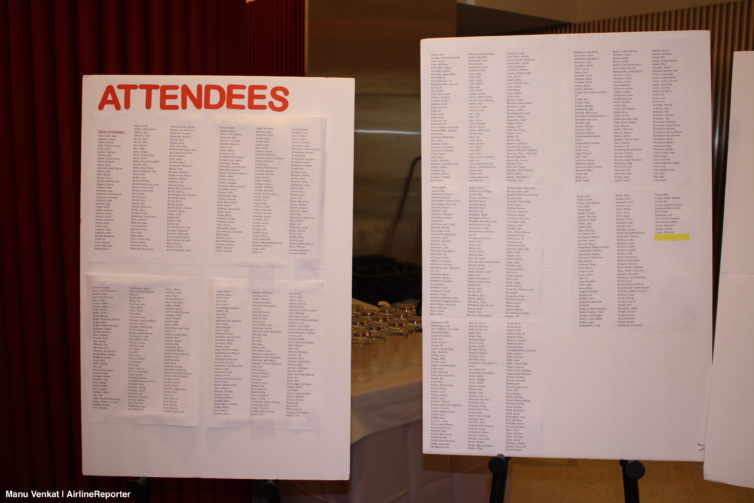 BONUS: Up, Up, and Away at the TWA Museum in Kansas City 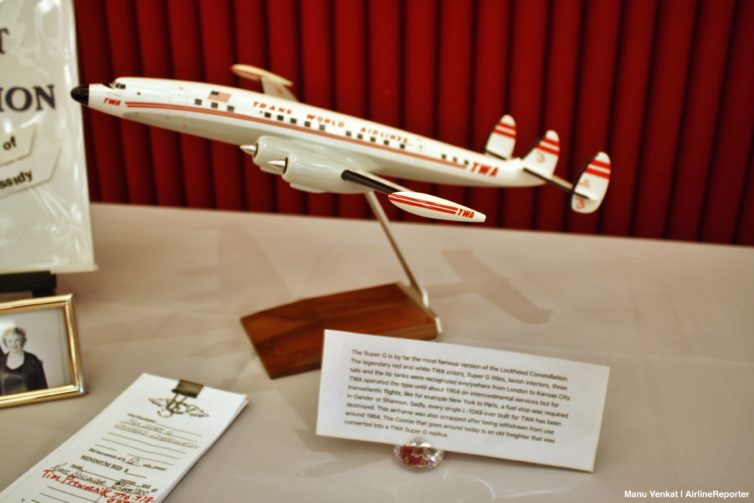 What a way to get our first look at the TWA Hotel! The Silver Wings crew’s excitement was infectious and we kept overhearing members talking about how impressed they were with the venue.

Soon to come: our take on the hotel itself. Stay tuned!

So sorry I missed the event. As a former TWA aircraft mechanic, that started my career at JFK, I fondly remember many hours spent at terminal 5. Albeit on a shift 2A rocket ride. So many memories, so many good friends. Kudos, to all those that keep the memory alive.

I flew in TWA Connies as a 6 year old child, and the experience was a magical introduction to flying, which has held my interest for over 60 years now. I read the commercial aviation press every day and marvel at these beautiful flying machines, both old and new. The Constellation gets my vote as the prettiest of the pre-jet airliners, and TWA, along with Pan Am, are airlines which are sorely missed.

Isn’t this ironic as I was transitting through JFK recently and saw this magnificent plane. I am an avid collector of aero diecasts and one of this very plane was recently released and today mine arrived! I never flew a Connie but often TWA around 1999 for 6 months flying Toronto to Lincoln, NE weekly and loved TWA even if it was a DC-9!

I was hired in “65 and was a 727 FO based in New York. The first time I was in the iconic terminal I was walking with Captain George Long when he stopped and pointed down at the floor and said, “See all those round tiles that make up the floor? Somewhere in this terminal there is on square one.” For the next 33 years I looked for that damn tile and never found it. Has anyone out there ever seen it? Whosoever has read this is now a cursed as I am and will forever think about that square tile.

I was not a member of the TWA team but flew TWA weekly for about 6 months YYZLNK via STL, in either 1998 or 1999. I was a very experienced traveller who’d flown long haul on such wonderful carriers as SQ, QF, and MH when working in SYD. I was not looking forward to flying coach on a US airline however, pretty soon I fell in love with TW. The staff always made me feel special and on my third leg, an attendant let me know that TW had noticed me flying weekly and invited me upfront and gave me an almost full bottle of wine to take home that Friday evening. Unusually, for an American carrier, the flights were always on time except for one late departure on an STL-YYZ leg caused by “laminar separation”. I asked the captain did he mean the wing skin was peeling which he confirmed but asked me to keep quiet and that duct tape, naturally, had fixed the minor issue!