Alert: a new player has entered the game. At long last, Southwest Airlines is flying to Hawaii. It’s a major milestone for the airline, which has had its eyes on the Hawaii prize for a years. So when the first flight departed Oakland for Honolulu on March 17th, the airline threw a BIG party to celebrate.

Building up to a big aloha

Southwest has been on an impressive campaign to solidify its strength on the west coast. So adding Hawaii flights was only a matter of time. Still, Southwest took its sweet time making the jump from “hmm we want to do this” to “OK we’re actually doing it!”

The airline needed to clear ETOPS (extended-range twin-engine operational performance standards, or more recently, just called extended operations) certification and some other red tape to make Hawaii happen. But just as it moved forward, the government shutdown hit. It pushed back Southwest’s Hawaii start date back by a few months, but soon after the shutdown ended the certification process wrapped up and tickets went on sale.

Here’s the schedule of the Hawaii inaugurals:

Service to Hawaii from San Diego and Sacramento is also on its way. 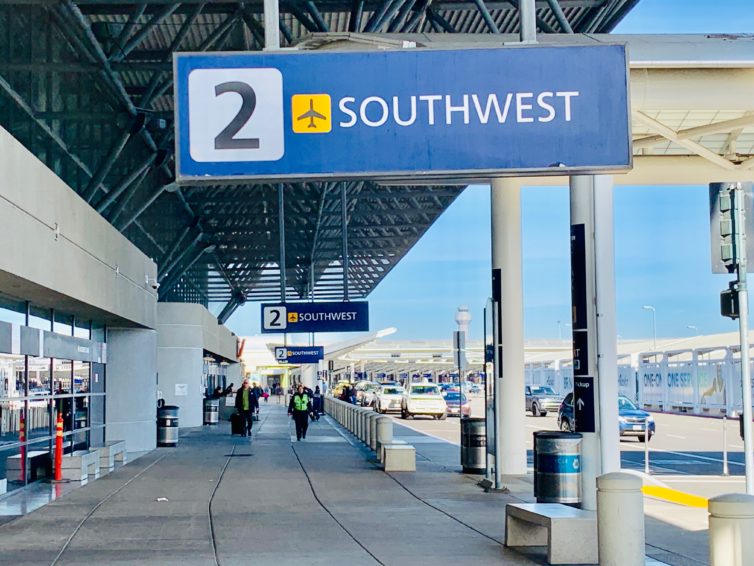 On the morning of March 17th, we headed over to Oakland International Airport — one of Southwest’s west coast hubs — to join the festivities. Literally the moment we walked through the front doors of terminal 2 it was clear something Hawaii-related was going on: 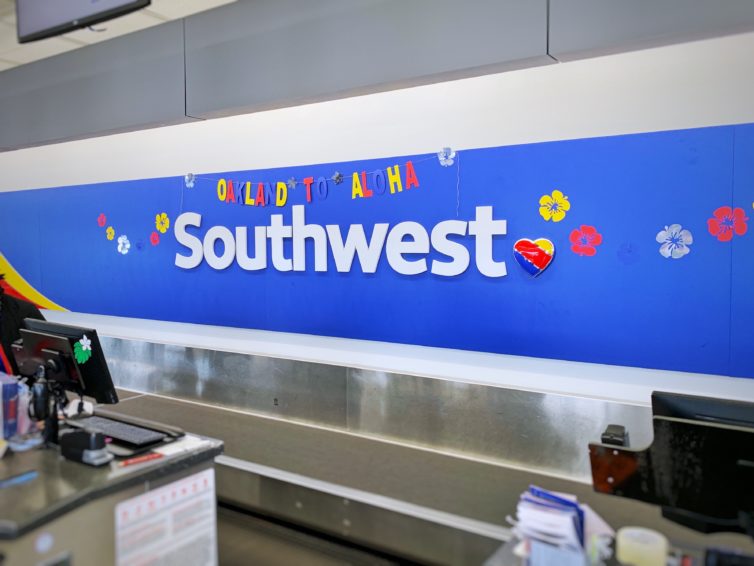 The flight was departing out of terminal 1, the home of most airlines other than Southwest. T1 and Southwest’s T2 are connected airside so passengers could still clear security at the T2 TSA checkpoint, which recently got a wellness-focused makeover from Kaiser Permanente.

At the gate the party had already begun.

A group of Hawaiian musicians was there to set the mood. 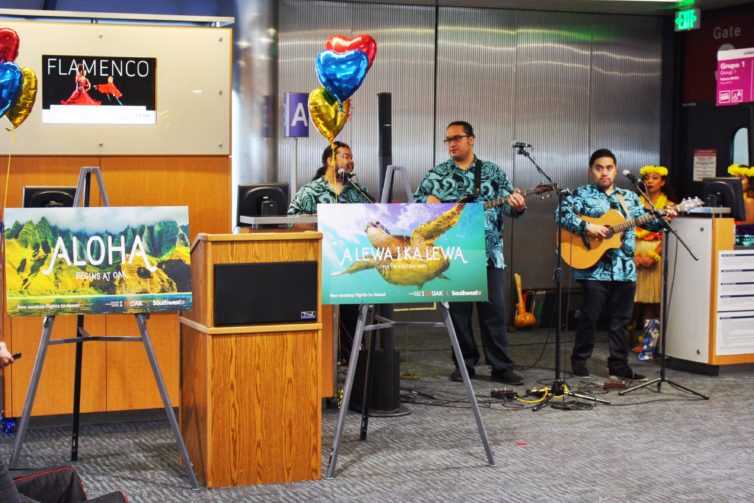 The Oakland Airport people were as excited as the Southwest folks were. Which made sense, since it was an honor for their airport to be chosen for Southwest’s first Hawaii route. To celebrate they were cutting slices of cake for passengers. 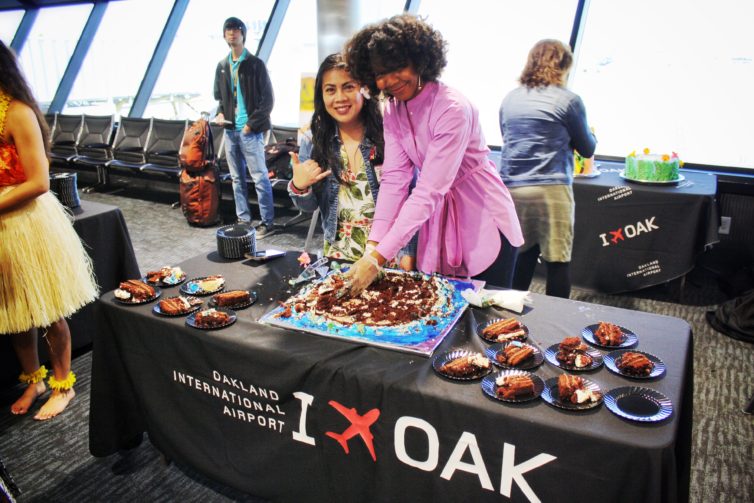 It became really obvious really quickly that this was no usual airport crowd. A lot of passengers were Southwest employees, having the time of their lives celebrating their airline’s milestone. Most other passengers were diehard Southwest fans. There were a lot of Hawaiian shirts around, but a few passengers had made custom T-shirts to commemorate their ride on this historic flight. 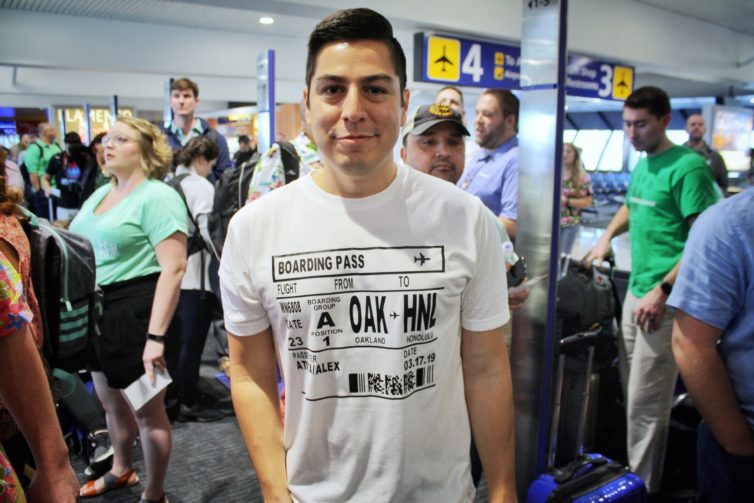 The Klan family, shown below, had been on a mind-blowing thirty Southwest route inaugurals before this one. 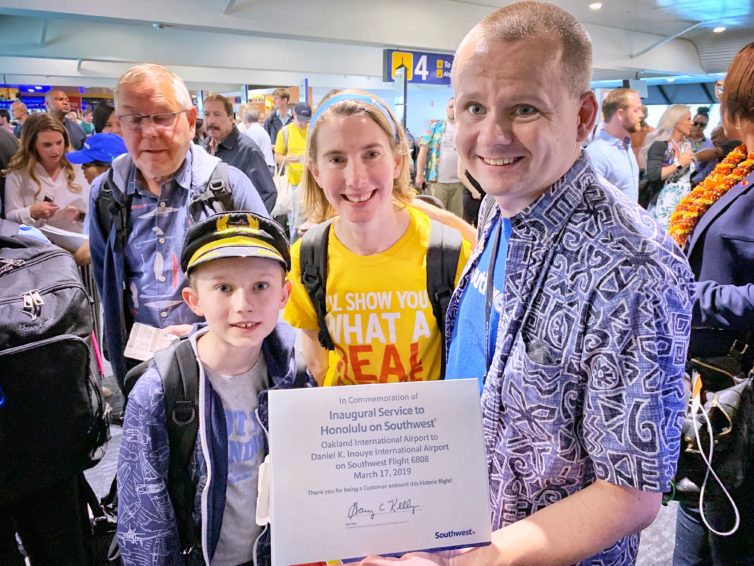 In addition to a certificates, passengers also got custom Southwest baggage tags as a keepsake. 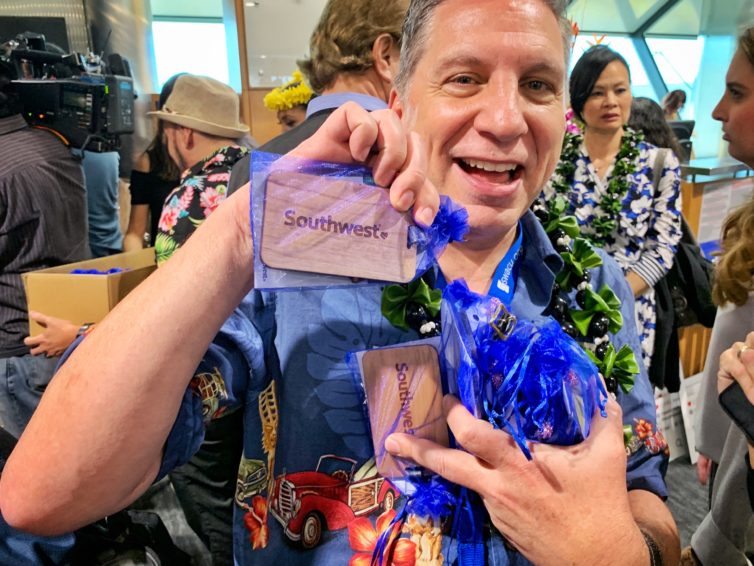 The flight’s veteran captain Michael Styer was your classic straight-faced pilot. But he couldn’t help but hide his emotions, a mix of pride in the airline, honor at getting to fly the inaugural, and a tinge of sadness over the passing of Southwest co-founder Herb Kelleher earlier in the year. 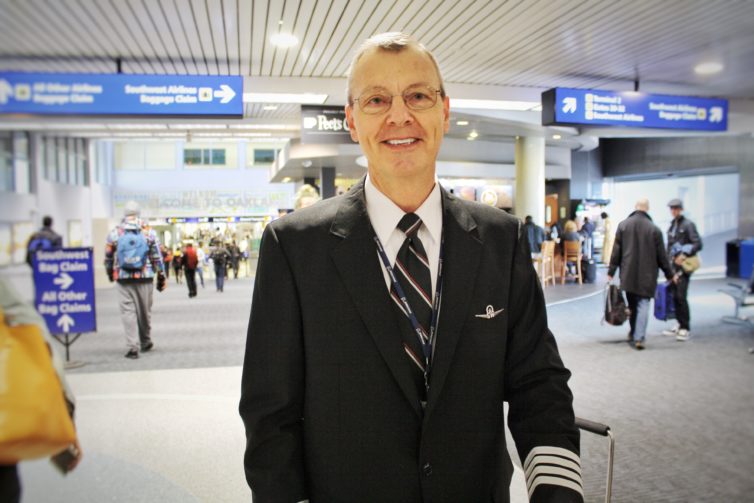 As boarding started, a pair of Hawaiians garlanded passengers with flower leis. 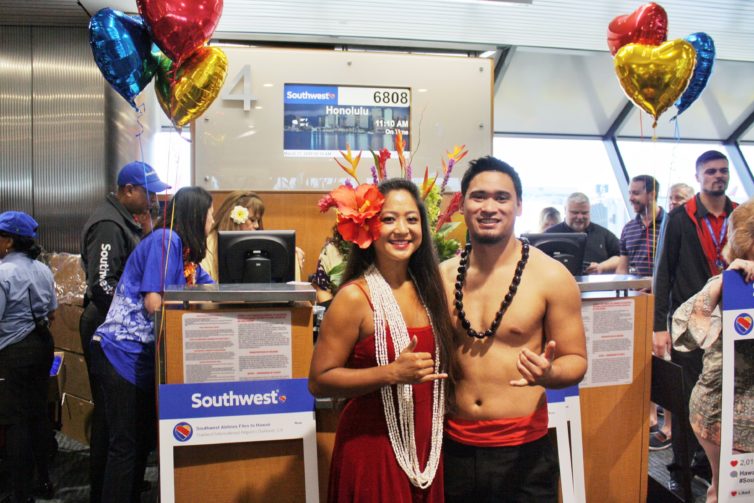 BONUS: How Do You Get the Best Seat on Southwest Airlines? 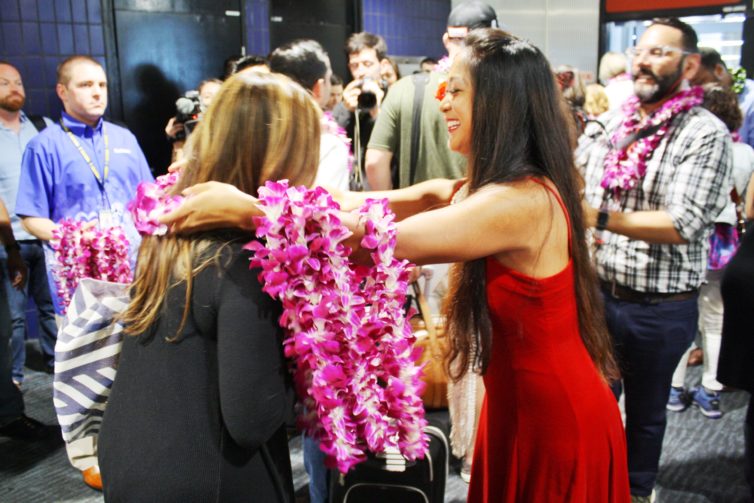 Off to the ramp and runway

The ground crew got in on the fun too. They had made signs to celebrate and they took a lot of pictures (when they weren’t hard at work preparing the aircraft). 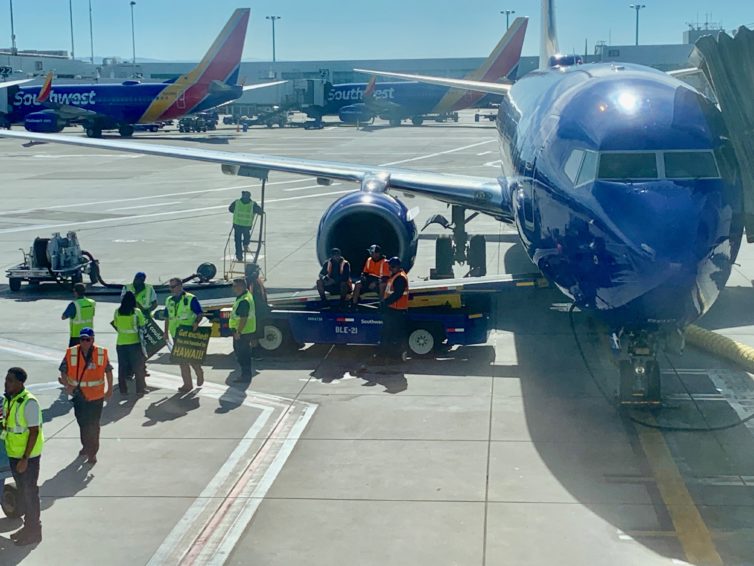 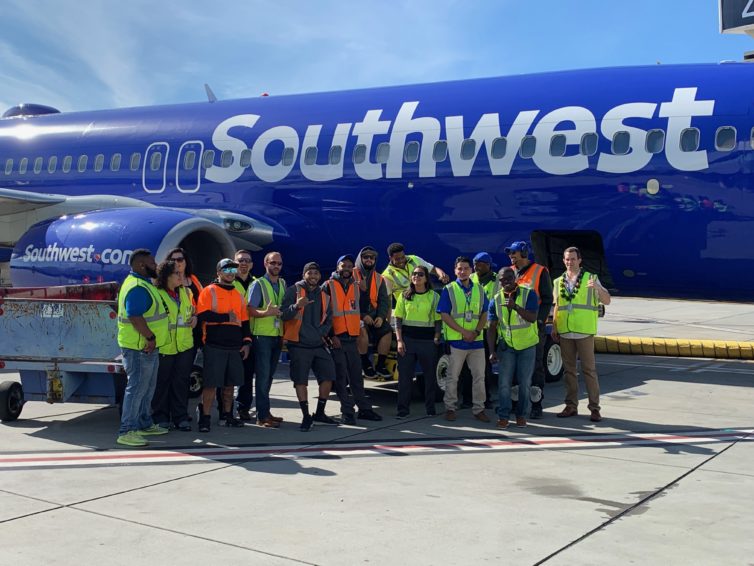 As boarding wrapped up we rode to the far end of the departure runway. 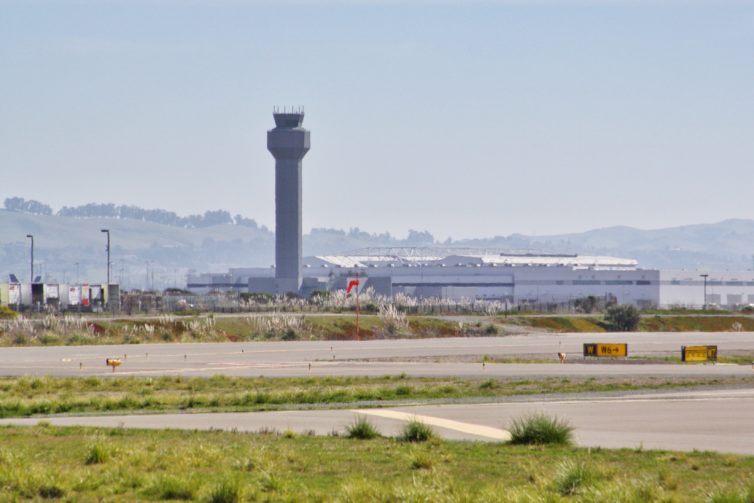 A few minutes later, the 737-800 bound for Honolulu roared over our heads, looking brilliant in the midday sun.

BONUS: Putting the Newish Southwest Seats to the (Knee, Back, Arm, Butt) Test 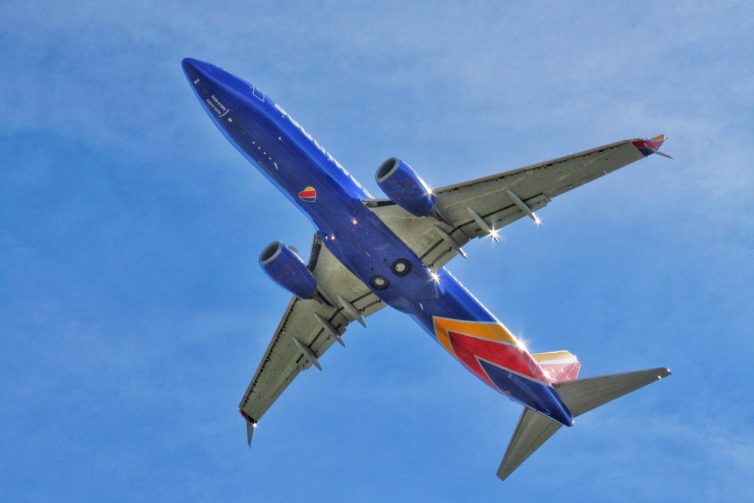 The plane’s route curved around San Francisco, which must have made for some amazing views. Hopefully the people on board enjoyed them, though we couldn’t blame ’em if they were already busy breaking out the Mai Tais.

And with that, history was made! Anecdotal accounts from onboard suggest that the flight was as much of a blast as you’d have expected it to be.

Passing by a grounded bird

March 17th was right in the thick of the Boeing 737 MAX 8 controversy, and as we rode back from the runway our van passed a grounded Southwest MAX 8. Since then, the planes have been moved to a more remote location for storage while the Boeing folks work on a software update. 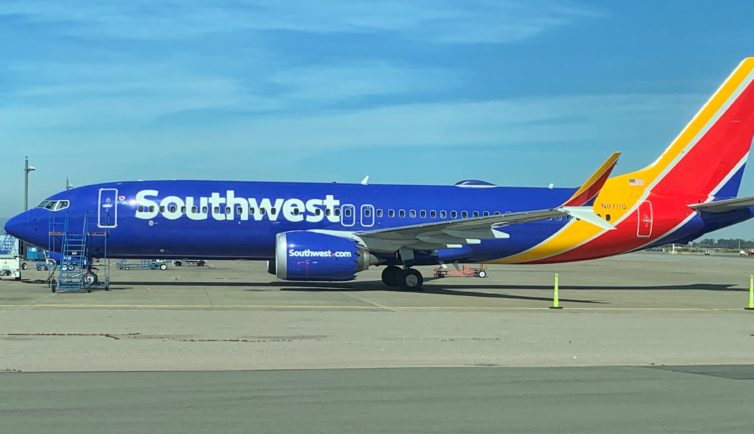 Once the MAX 8’s safety issues are sorted out they will probably share the work on Hawaii flights. But it’s anyone’s guess when that will happen. For now, the tried and true 737-800 is more than capable to get Southwest from the west coast to Hawaii.

Wrapping up a big day for Southwest

Southwest has celebrated a lot of major milestones during its past few decades of immense growth. But the launch of Hawaii flights is one of the very biggest. Just take a look at the airline’s route network and clearly one flight stands apart from the rest: 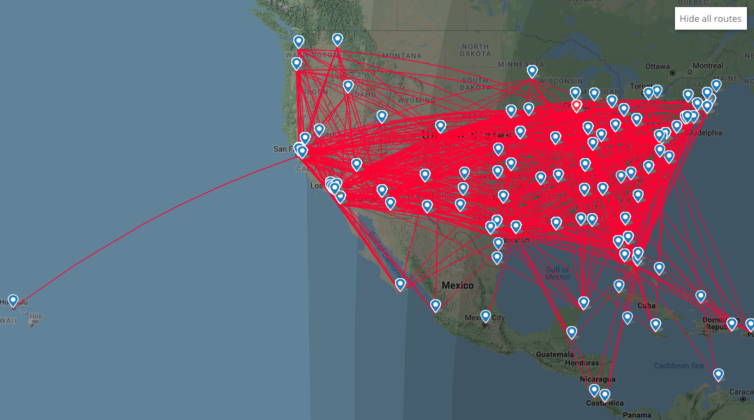 But putting aside the well-deserved fanfare, will Southwest succeed in Hawaii? Sure, there are factors working in its favor. It’s a popular airline with a cohort of die-hard fans. It already has a well-developed west coast presence. It has the planes to make the jump to Hawaii. And by resolutely refusing to charge bag fees or change fees, it’s pretty differentiated from the competition.

BONUS: What’s Next for Southwest Airlines? An Elite Flyer’s Wishlist 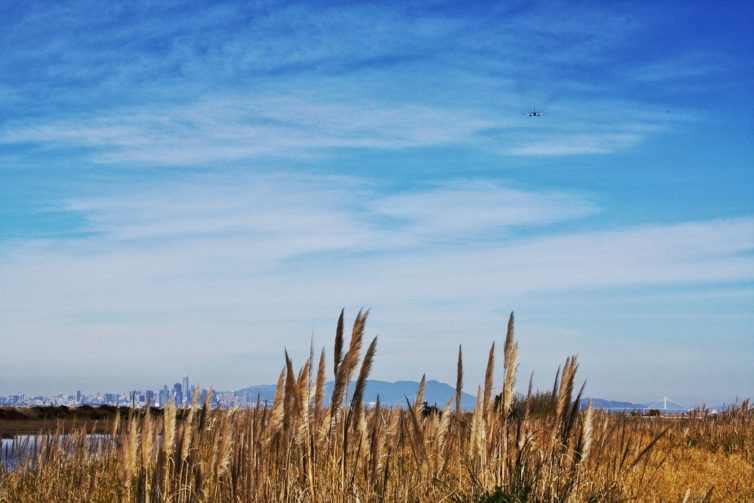 At the same time, Southwest will face its share of challenges. The airline’s bread and butter is the short-to-medium-distance domestic game, and Hawaii is on the outside edge of their comfort zone for flight times. Routes to Hawaii are long enough that some passengers may get hungrier than what Southwest’s onboard “menu” can satisfy. You’ll need to bring your own power source, as Southwest doesn’t offer outlets. And the airline’s decision not to operate overnight flights limits connection opportunities to the rest of the U.S.

Still there’s no doubt that Southwest’s Hawaiian debut is exciting and big news!

Now it’s time for us to hear from you. What do you think about Southwest’s Hawai service? Were any of you on one of the first few Hawaii flights? Share your thoughts and experiences in the comments section below.

https://www.airlinereporter.com
Touring the Antonov AN-124-100M: Climb Onboard one of the Largest Cargo Planes in the World
Economy, Premium Economy, and Business on Qantas — Oh My!
4 Comments

Now THAT’S and Inaugural! Wow! I recently flew the KLM inaugural to Boston from AMS. We got a photo with a poster announcing new service to Boston. That’s it. 🙁 We did get a water cannon salute in Boston though. Great article! (side note: remember when they (airlines) flew the 747’s to Hawaii?? now it’s a 73… )

I was on day two of the service. The vibe was awesome but as stated the majority of passengers I felt were Southwest Employees. I was one of the lucky ones who scraped up a 99 round trip ticket and stayed with my friend in Waikiki!!!! My biggest concern was comfort. The B737-800 was surprisingly roomy!!!! I think southwest planes have a few less seats per plane than other airlines so the comfort level was just fine. I brought my own food to cover the 5.5 hour flight and all in all the flight both directions were flawless!!!! Will definitely use Southwest again!!!!

Your thoughts aren’t deceiving you. Southwest’s 737-800s (and Max8s) have 32/33-inch seat pitch (just like their older, smaller aircraft used to have), and you can definitely feel that difference vs. the 30-31 inches you get in Economy on American, United, Delta, Alaska, etc.

Pardon me, but Delta’s economy seat pitch is a solid 32″. Check it out!