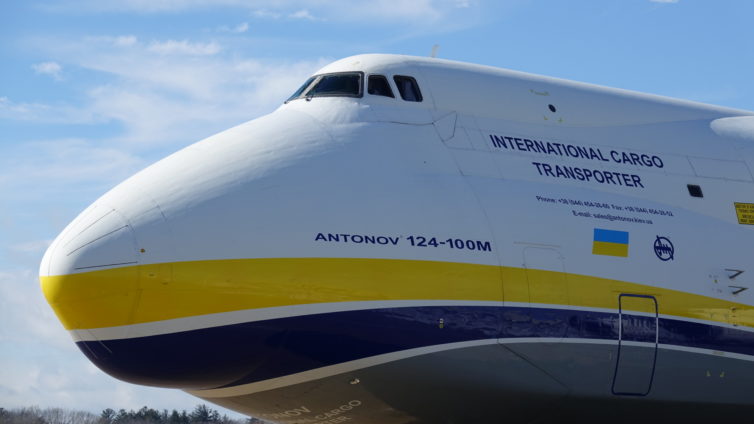 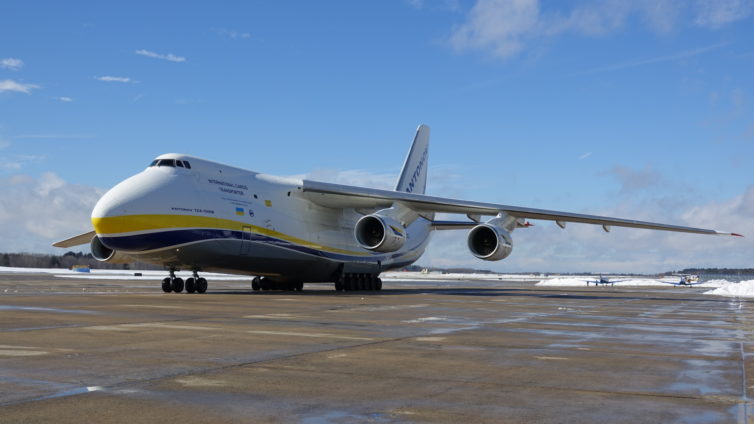 The Russian-made APU was whining loudly as we waited while the crew did their shut down.Â  After about five minutes, the crew emerged.Â  Once the last man got off the airplane, we were lead up the stairs and into the 120-foot-long by 21-foot-wide by 14-foot-high cargo area.Â  In case you’re wondering how big this is, imagine 42 Ford Explorer SUVs parked inside, three-abreast, 21-deep, and stacked two-high.Â  You would still have room to walk around. 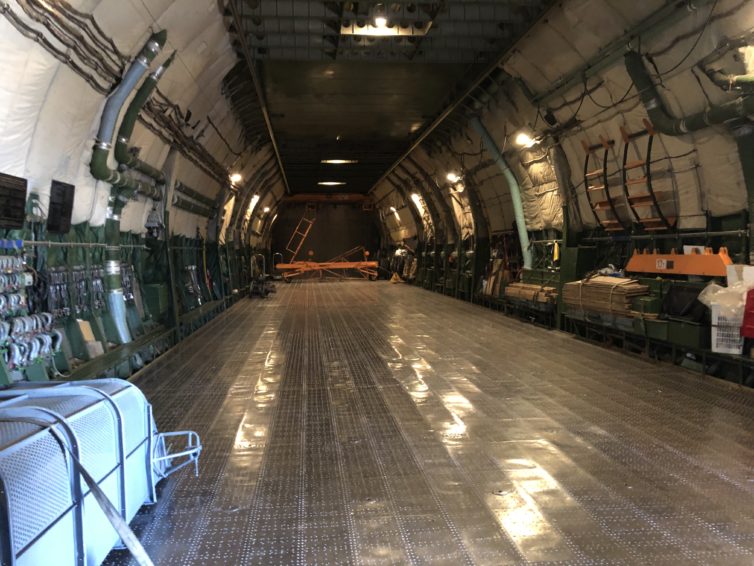 Running along the ceiling of the interior cargo area are rails that hold two gantry cranes capable of lifting 30 tons. They are used to facilitate loading.Â  Cargo can also be trucked in and tied down using numbered slots on the wall which correspond to tie downs on the titanium floor.Â  This is used to position cargo for weight and balance purposes.Â  There is even a track system to bring cargo in like on a rail car, which can be pulled by winches if need be. 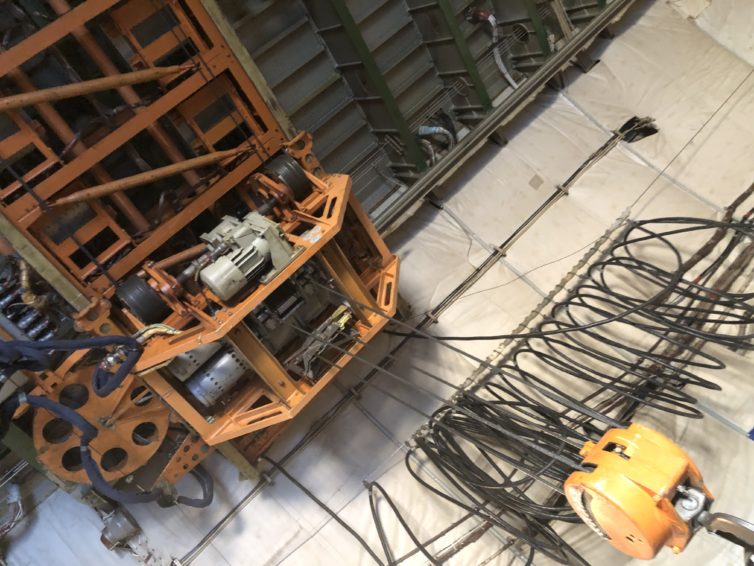 The flight deck is located on the upper level, which is accessible by a ladder and small hatch.Â  Once in flight, the cargo bay is not pressurized, much like the 747 Dreamlifter.Â  There is an aft crew cabin for the technical flight crew.Â  While there is a connection between the rear pressurized cabin, the front pressurized cockpit, and flight crew area, the tunnel itself is not pressurized and requires oxygen to make the journey.Â  It is not something typically done during flight unless absolutely necessary.Â  So, up we go… 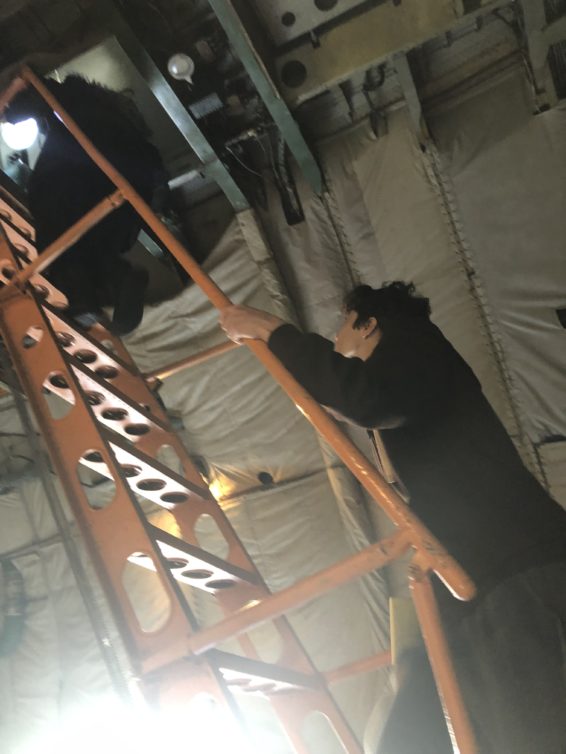 The first thing I noticed upon emerging on the upper side of the hatch is the “first class” seat, complete with a window.Â  This is the only passenger seat on board with a window.Â  Because the airplane is so heavy upon departure, the engines are spooled up for about five minutes to ensure stability.Â  Losing an engine on takeoff would be catastrophic.Â  The technical crew in the rear of the airplane will feel the engines spool up and the aircraft shake under power, but with no visual reference they really have no idea if they are in flight until they feel any slight turbulence on climb out.Â  They also have no idea they are back on the ground until the wheels touch.Â  I don’t know about you, but I can’t imagine how this must feel as a passenger.Â  I need my window! 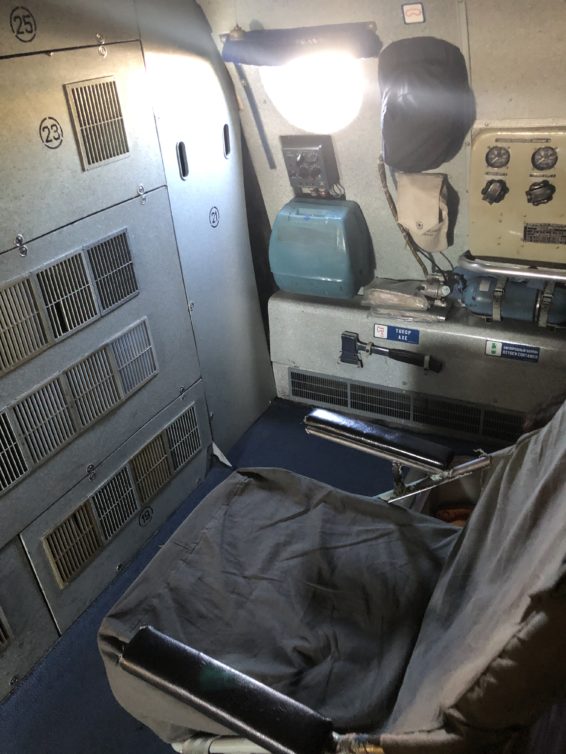 We were unable to get a look at the rear technical crew cabin, quite frankly because there are no cleaning crews or flight attendants to tidy things.Â  They didn’t want us to see any mess that might have been made during the seven-hour flight from Victorville.Â  That was understandable; I wouldn’t want to show off my house with it untidy.Â  It was okay, we got to check out the flight crew’s kitchenette and sleeping quarters. Â  Not quite the upper deck of a BA 747, but it does the job. 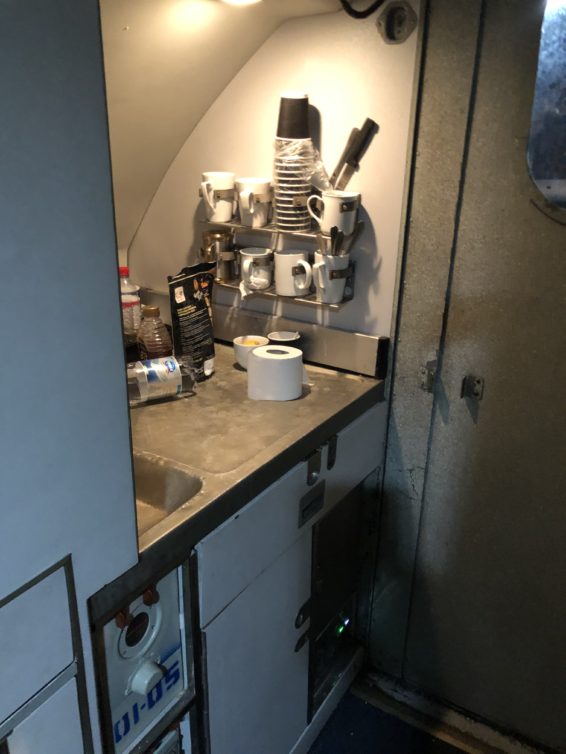 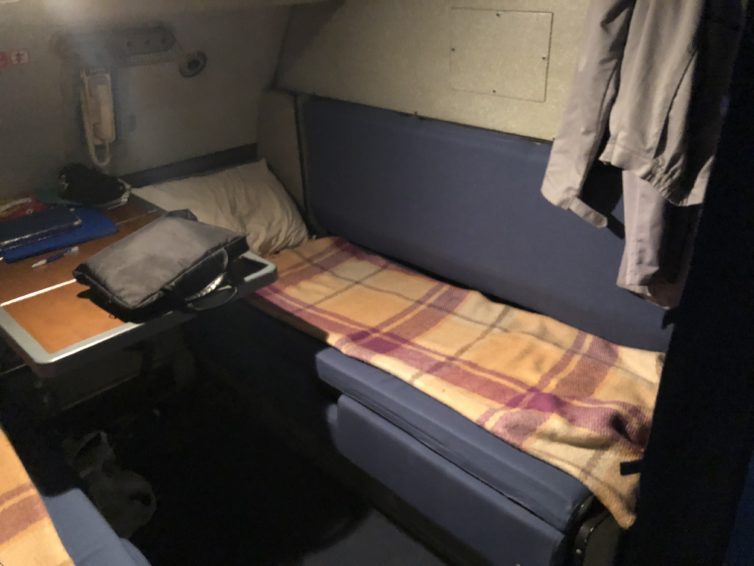 I wonder how many of you remember the Gilligan’s Island episode (yes, I’m dating myself), where Gilligan found an old Japanese sub from World War 2 and was going to drive it to Hawaii to rescue everybody.Â  The sub’s instrumentation was all in Japanese and he couldn’t figure anything out.Â  This is how I felt looking at this Russian-made cockpit. 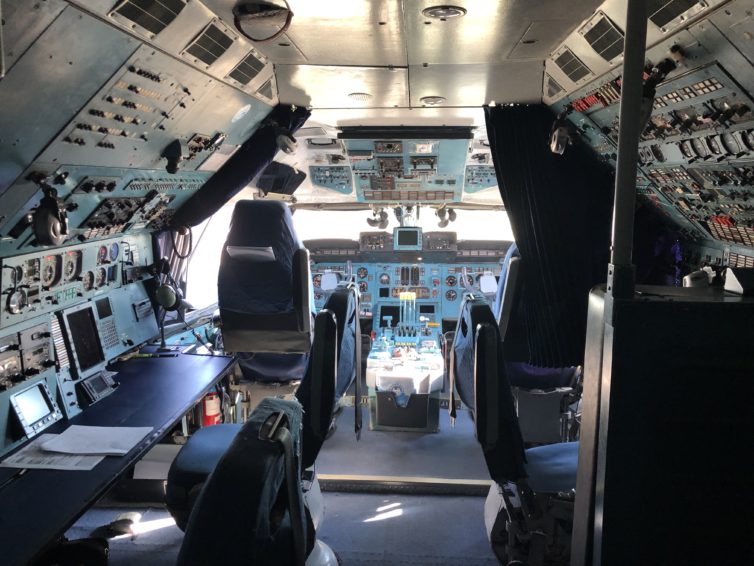 This is not a Boeing, and it is far from an Airbus.Â  There are six stations, not counting relief pilots.Â  This is old school stuff.Â  Navigator, radio operator, weight and balance, load, pilot, copilot etc… Â Taking a closer look at the flight deck, I felt lost.Â  I am pretty familiar with the modern aircraft cockpit.Â  I can name most switches, dials, and knobs and tell you what they all do.Â  I couldn’t even tell you how to start the APU in this airplane. 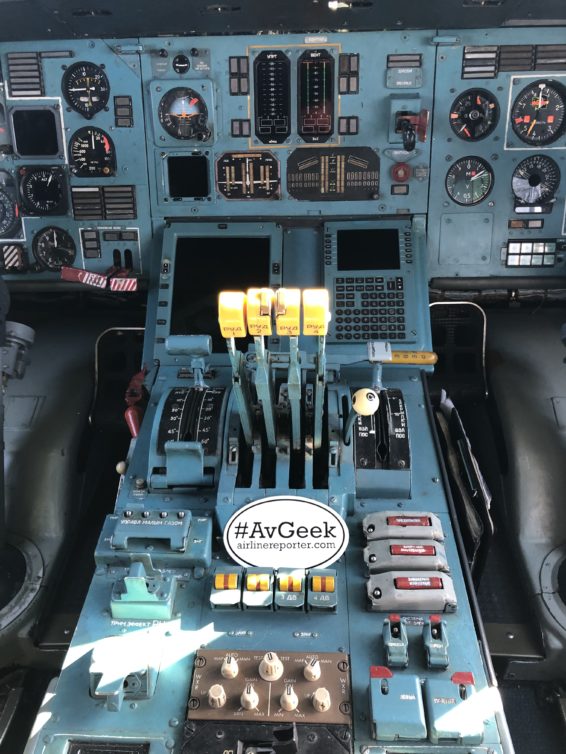 It was really cool though, sitting in the pilot’s seat of this beast.Â  Honestly, it felt like a 747. Well, except that I couldn’t read anything. 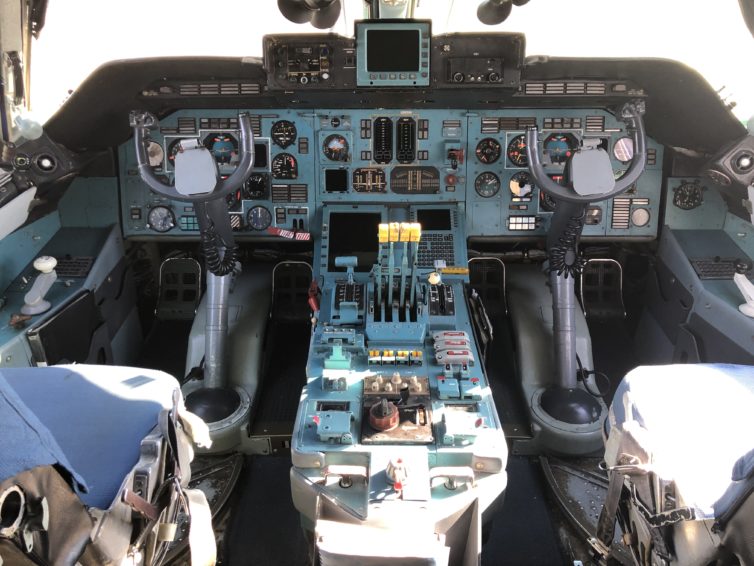 As we climbed back down, I turned to get one more close up shot of the 124, amazed by its size and beauty.Â  A few interesting facts about this airplane: there is no “hub” that they can fly to for repairs.Â  They carry pretty much everything they need to do repairs “on the road.”Â  They have a technical crew on board that handles loading and unloading, weight and balance etc…Â  And every person on board has an expertise.Â  One may be an expert on the gantry.Â  One on the hydraulics.Â  The crew chief on board knows pretty much everything about this airplane.Â  In other words, on the road they are very self sufficient.Â  They even carry spare tires should they need to replace one. 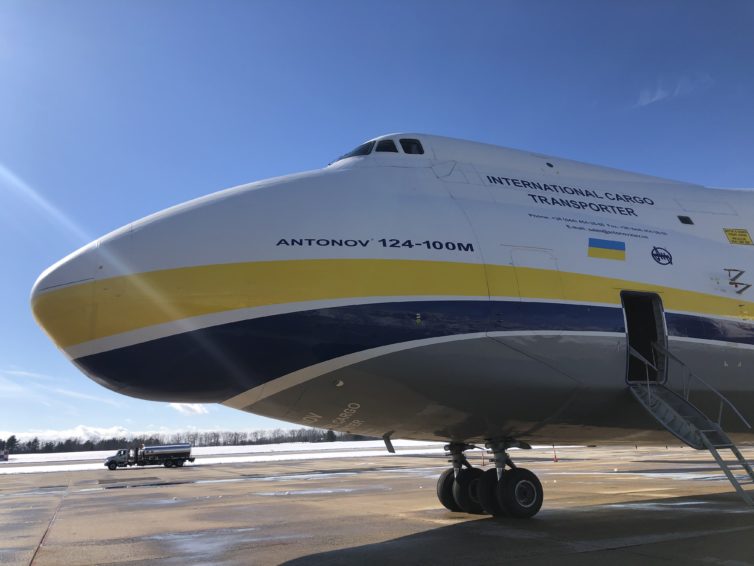 The airplane can hold 26,486 cubic feet in volume of cargo. It can fly 2,889 miles and requires 9,843 feet of runway holding nearly 132 tons of cargo.Â  It was an amazing opportunity to see this aircraft up close and I want to thank my friend Kate who made this happen.Â  I also want to thank the cargo team who gave us the tour and were so friendly and accommodating.Â  I was able to take my son along (he is the one climbing the latter in the photo above).Â  They gave him a model of the AN-124, and yes I was jealous.Â

This airplane is as impressive up close as it is from the spotter’s field of any local airport you may see it at.Â  Keep an eye out for it.Â  Who knows when it may be summoned to your local field to transport a new engine for some airline!

CONTRIBUTOR - BOSTON, MA. I am an avid spotter, #Avgeek and overall enthusiast. I hold my private pilot's license for VFR single engine and I can proudly say I have over ten hours in an actual 737 simulator. I am the author of Flightline - an aviation thriller. I currently reside in Boston and travel the world for aviation related opportunities and photography.

Could you please clarify what you mean by â€œRussian made cockpit?â€ The Antonov is Ukranian.

The Ukraine declared independence from Russia in August of 1991. The aircraft, from what I understand, was manufactured in the 80’s.

I appreciate the effort, but let me help. First, â€œThe Ukraineâ€ is an improper reference to the country called Ukraine. Referring it your way implies it is a part of another country, and it isnâ€™t. Using your logic, you should say that the Antonov was built in the USSR, not Russia, which also wasnâ€™t an independent country in the 1980s. But that would still be offensive to Ukrainians, because the Antonov is a point of national Ukrainian pride. It is definitely NOT Russian. Did you see the Ukrainian flag on the side of the plane? I am not trying to pick on you – you are certainly not alone in your lack of knowledge about the USSR and the countries that were involuntarily a part of it, but to those of us with roots in former Soviet Socialist Republics, it is high time our countries are recognized.

What an amazing aircraft! It is so good to see an old plane in a working condition, especially from the Soviet Era. I was born and raised in Ukraine all during the USSR, and after it dissolved into separate states, and I did not see anything offensive in your article (in response to Brian’s comments). Do you know how this plane is being maintained? They must have Antonov expert with them at all times to make sure all is working properly. I wonder if they know about the possibility of using remote inspection software for their aircraft maintenance needs. The company I work for developed an innovative remote maintenance, repair and overhaul (MRO) software that can be used for airplane inspections. The aircraft expert is located off-site (maybe even in Ukraine!) and crew/techs can show the video of the plane using the software to conduct inspection and necessary maintenance. The software also offers itemized checklists, screen capture and annotation, video recording and playback, bookmarks, file and image uploads, status updates and more. Check it out at https://www.cloudvisit.com/

Thank you for your comments Lily! I appreciate your input. That’s very interesting about the remote inspection software. They do, in fact, have an Antonov expert on board with them at all times and they carry many parts with them to do field repairs. I will pass the information you’re mentioning on to my friend to get to the crew. Thank you again for your kind words and comments.

I got to visit one recently. It’s really cool. After talking to the crew, they seem to carry alot of spares onboars, and the Antonov mechanics are part of the crew. The plane was built in ccd 1993 (per crew), but it seemed ancient. I didn’t get to see it fly as I had to leave once our cargo was onboard. One I saw was Russian flagged plane from Volga-Dnepr.

Brian — you are confusing people with your comments. The plane was made in USSR. Neither Ukraine nor Russia can claim some sole proprietorship of manufacturing here. Ukraine and Russia continued to cooperate and Russia was the main customer of the Antonov bureau after 1991. But after 2014, the cooperation stopped with sad consequences for Antonov. Russia may restart production of Antonov airplanes in Voronezh aircraft factory. Unfortunately, it is unlikely that any more AN’s will be assembled in Ukraine though.

How many Ukrainian flags should there be so that the reporter called it â€œUkrainian made aircraftâ€?? An airline reporter, really?

This is an aviation forum. Not a political forum. Please stop making this article about an amazing airplane political!! It was intended to share my experience… not to make any kind of political statement. I merely reiterated what I got from the crew. The people actually operating and flying this airplane.

81 ,77,78 come into lck Rickenbacker all the time cool plane

We watched one leave from BWI today.
Such a sadness that they are old. Such wonderful planes.
I have Russian friends, all now USA citizens with great pride, & we agree what accomplishments could be achieved if the intellectual power of Russians & surroundings were focused on productive outcomes.