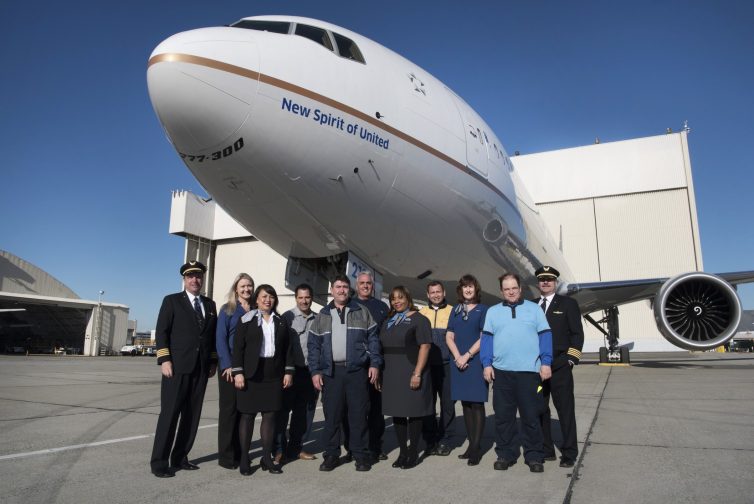 It’s not every day that an airline welcomes a new aircraft into its fleet, especially when the plane has the entire airline’s high expectations on its shoulders. But that’s exactly the situation with United’s new fleet of Boeing 777-300ERs, outfitted with the long-awaited Polaris premium cabin. The first of the fleet, christened the “New Spirit of United,” will start carrying passengers this month.

Are you curious whether the Polaris seat and the “New Spirit of United” will match the hype? Well get excited: AirlineReporter will be onboard the preview flight of the United 777-300ER and the Polaris seat this coming Monday, the 13th. We’ll give you a glimpse of the sleek new Polaris-branded lounge at Chicago O’Hare before the brand-new 77W flies us to San Francisco in style. We’ll also be providing updates on Monday via Twitter.

Below we’re giving you the lowdown on the 777-300ER debut, a primer on Polaris, and pro tips on how you can experience both for yourself. Excited? Read on!

What is Polaris anyways?

It’s no secret that United’s old BusinessFirst cabin — often in an eight-abreast dorm-style configuration on 747s and 777-200s — was not a competitive product.

Instead of pursuing incremental updates to catch up with its competitors, United completely reinvented its long-haul experience from lounge to landing. The end result of the redesign was Polaris.

Highlights of the new Polaris premium cabin experience include: 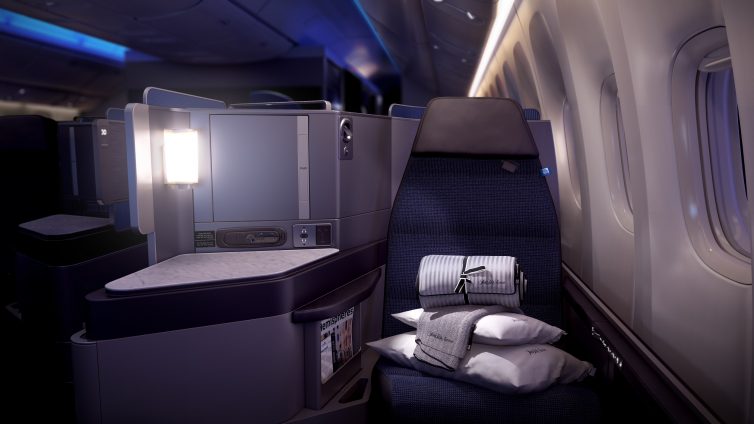 If you’ve had much experience with United’s old BusinessFirst cabin, you’ve got to be psyched about these changes. For more details on the hard product, read our coverage of an on-the-ground Polaris demo we attended a few months ago.

The new Polaris cabin will debut on the newly-delivered 777-300ERs, and will be introduced on new 787 Dreamliners in the near future. United will then begin the long process of retrofitting its existing long-haul fleet, which will take a while.

United technically launched Polaris a few months ago, before the new seats were actually flying. This just meant updated dining and bedding. While those elements have received very positive reviews, anyone who boarded a “Polaris Business” branded flight expecting the snazzy new seat would have been disappointed.

BONUS: United 787 BusinessFirst and Economy Between Tokyo and Denver

What if I only fly in economy?

While the new 777-300ERs will be a huge win for flyers seated up front in the new Polaris seats, the news is more mixed at the back of the plane. United opted for the tighter ten-abreast layout on its 777-300ER fleet, as opposed to the very roomy nine-abreast configuration on its 777-200s. It’s disappointing news, though not surprising since ten-abreast is becoming the new normal for the 777.

On the bright side, seats in Economy will have shared power outlets, personal entertainment screens, and USB ports. The same can’t be said for the old 747s that the 777-300ER will be replacing on many routes. 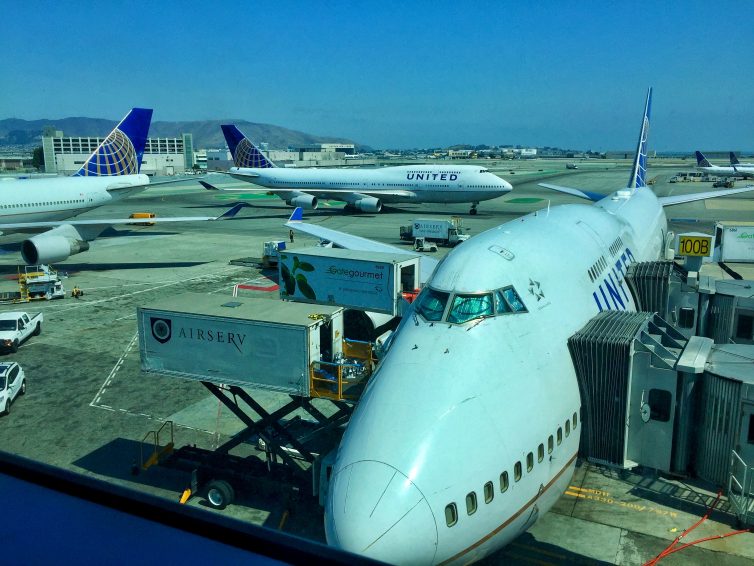 It will be bittersweet to see the 777-300ER replace the Queen of the Skies on many routes, but the onboard experience will be much better ’“ Photo: Manu Venkat | AirlineReporter

There’s some speculation based on seat maps that the first few rows of Economy Plus on the 777-300ER could one day be turned into a true Premium Economy cabin. But there’s no official word on that yet.

United generously invited us to be on the preview flight next week of the new 777-300ER and Polaris. Interestingly, United auctioned a spot on the flight to the general public. Bidding is now closed, but the last time we checked the top bid was a mind-blowing 300,000 United MileagePlus miles (and climbing).

Luckily you won’t have to drop that many miles to try out Polaris for yourselves. United will deploy the 777-300ER on 6x weekly flights between Newark Liberty (EWR) and San Francisco (SFO) starting on February 16th. A domestic hop in this intro period is a good opportunity for anyone who wants a quick taste of the new Polaris cabin.

The long-haul debut will be on March 25th, when a 777-300ER will take flight for Hong Kong from San Francisco, replacing a 747.

Both the domestic and international 777-300ER flights are now bookable with good availability in economy. Saver-level award ticket availability for Polaris looks limited for the Hong Kong route, at least for now.

Be sure to check back here next week for a report on the preview flight and the new Polaris lounge in O’Hare. Follow us on Twitter for real-time updates during the afternoon on Monday the 13th. And share your thoughts about United Polaris and the new 777-300ERs in the comments section below.

https://www.airlinereporter.com
The Club at SJC — Everyone Is Invited
Flying on Bubbles — Upper Class on a Virgin Atlantic Airbus A340-600
10 Comments

The reality seems to be that the vast majority of customers will have to put up with an inferior product for years to come. Meanwhile, United and the rest of the mediocre crowd is off squealing to Donald Trump to suppress competition.

Did United select mood lighting for economy too? A lot of the pictures I’ve seen were here you can kinda get a glimpse of economy show white lighting…

Also, it’s a bummer United didn’t select Starry Skies for the overhead panels as this would have fit nicely with the Polaris branding. It looks great on Emirates’ -300ERs

*where you can kinda get

That’s a great question. I haven’t seen any definitive photos of the economy cabin, so we’ll have to wait and see.

I will take a look for you today!

And I am pretty sure (when talking to Boeing about it) the Starry Skies was designed only for Emirates and no one else can use it. It is also quite complicated and based on the grumblings I have heard, others probably don’t want it. That said, it is freak’n cool!

The sort of Sky Interior lighting we are seeing on all the new Boeing aircraft is in the front and read of the Polaris plane. Nothing really that different except for the bulkheads have some pretty cool lighting in the business class.

The “New” United…wearing the three dedace-old livery of a different airline.

What a bunch of crap. Until they bring back the Tulip or create an entirely new branding, its still just boring old Continental.

Can I do the whole “it’s what is on the inside that really counts,” quote here? 🙂

United got worse! No airline deserves a five star rating if they have 10 abreast in the 777. It’s a crime to all the passengers. So I won’t fly Emarates or United as they both suck. Instead I’ll fly BA & Southwest.

You sort of had me until that last part 🙂