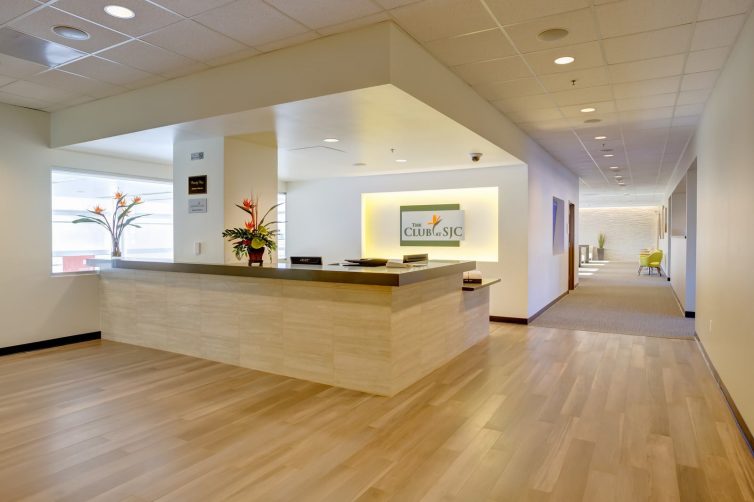 This past December, The Club at SJC, at San Jose Mineta International Airport (SJC) received the Priority Pass North America ’œLounge of the Year’ by Airport Lounge Development. This is a lounge of the people… well mostly. You don’t need to have a first class ticket or “Double Platinum, Wrapped in Diamonds” status with an airline (that might not be a real thing). If you have a few extra bucks, some time to burn, and a want to live a bit of the high-life, The Club at SJC might be for you. 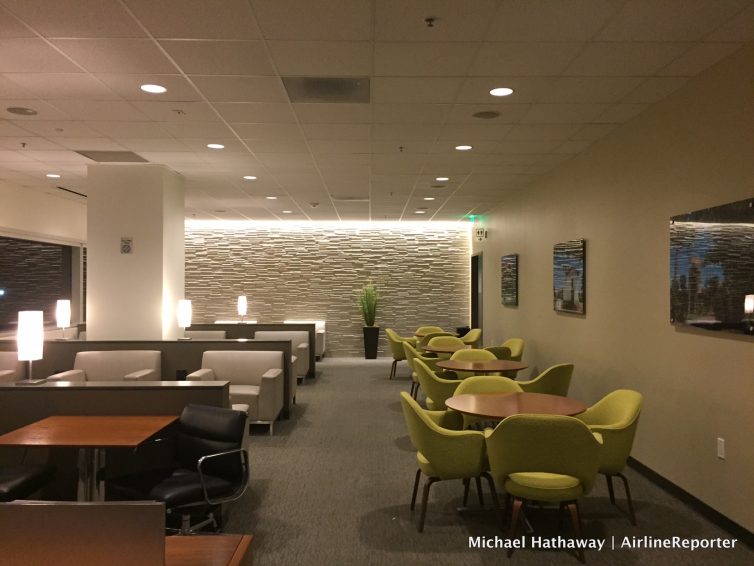 AirlineReporter was invited to visit the lounge to learn more about common use lounges, and of course see this award-winning staff in action (spoiler alert ’“ it is no surprise at all to see why this lounge won).

A brief history lesson of this writer’s home airport

With the tech boom in the 1990’s and early 2000’s, SJC was pretty big deal.  A hub for American Airlines, SJC had nonstop flights to the east coast, midwest, Asia, and was expanding into Europe with flights to Paris (CDG).  After 9/11 and subsequent bust of the middle to later first decade of the new century, the number of flights offered were dropping (as was the case for most airports and airlines). In 2006, SJC’s last overseas flight to NRT was dropped.  A couple of years later, American’s Admirals Club at SJC was shuttered (and remains vacant space today).

However, things turned around early in the second decade.  The economy started to grow, the Dreamliner took flight, and blue skies were on the horizon once again. 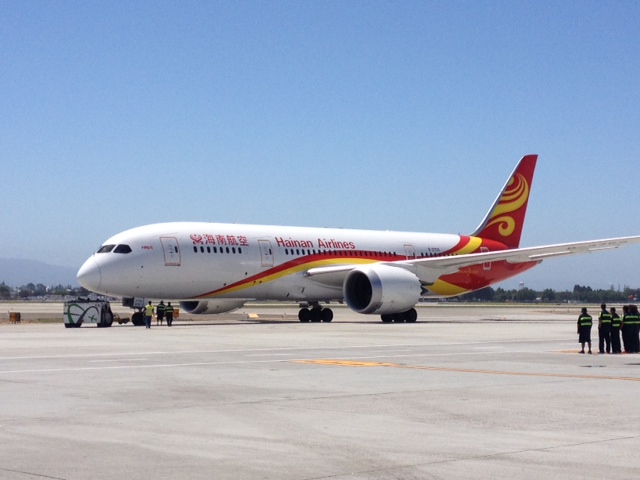 SJC’s link to Asia was restored 2013 with ANA’s launch of service to Tokyo ’“ Narita. This is when The Club at San Jose opened. And it didn’t’ stop there. After the success of ANA, more international (and domestic) flights have been added, including London Heathrow (British Airways), Beijing (Hainan), Shanghai (Air China), Frankfurt (Lufthansa), and Vancouver (Air Canada).

During peak flight times, it is often standing room only in this approx. 7,000sf space.  Before British Airways launched service, volume was around 3,000 passengers per month and almost tripled to 8,000 after. 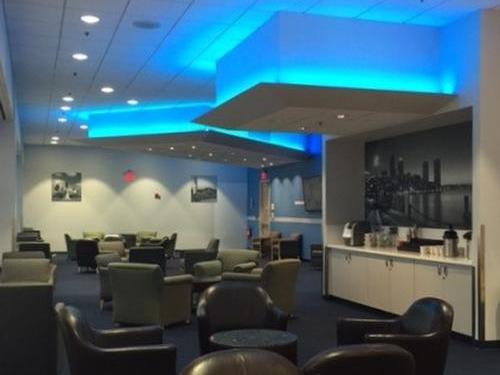 The Club at BOS 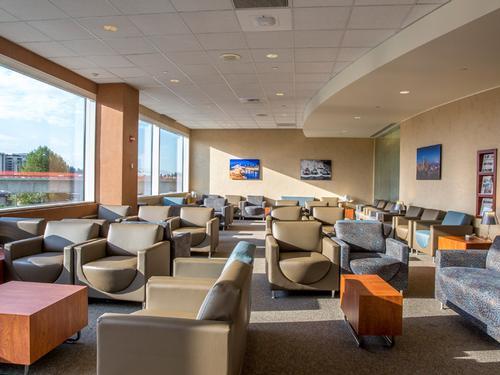 The Club at SEA 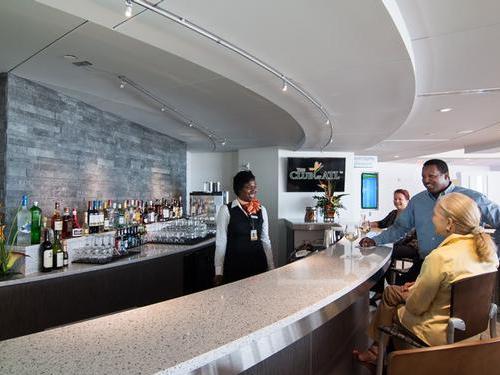 The Club at ATL

About Common Use Clubs

Common use clubs (which do not require any airline loyalty) are still a fairly new concept in the United States.  The first common use lounge in the US only opened in 2006 at Dallas Fort-Worth International Airport, and growth has been exponential ever since.  Priority Pass currently has 13 lounges across nine airports in the US. 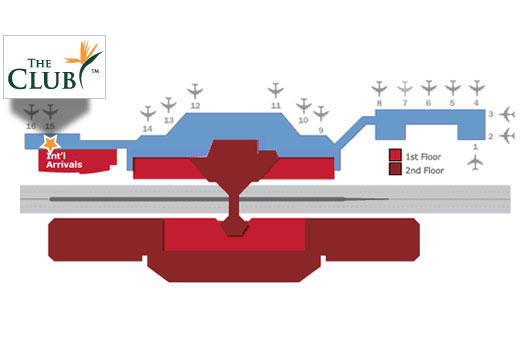 The club is located in Terminal A, across from Gate A15, on the 3rd level – Image: The Club

It just so happened that I had a trip to Chicago planned, which provided a great opportunity to visit the lounge before my flight.  My flight was at 8:00AM and I was greeted by Mary at 6:30 immediately after clearing security, who escorted me to the club.  The Club at SJC sits basically in the center of the airport, across from Gate 15 in the International Terminal.  Terminal A Security, where I came in from, is near Gate 12 ’“ about a five-minute walk from security to the Club.  (For long-haul international; ANA and Air China are in Terminal A & British Airways, Hainan, and Lufthansa are in Terminal B).  Terminal B Checkpoint to the Club is about a 10-minute walk. 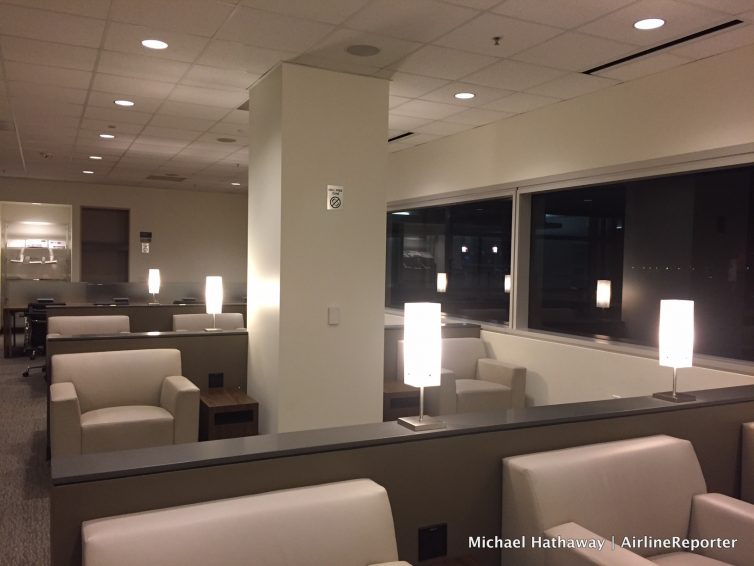 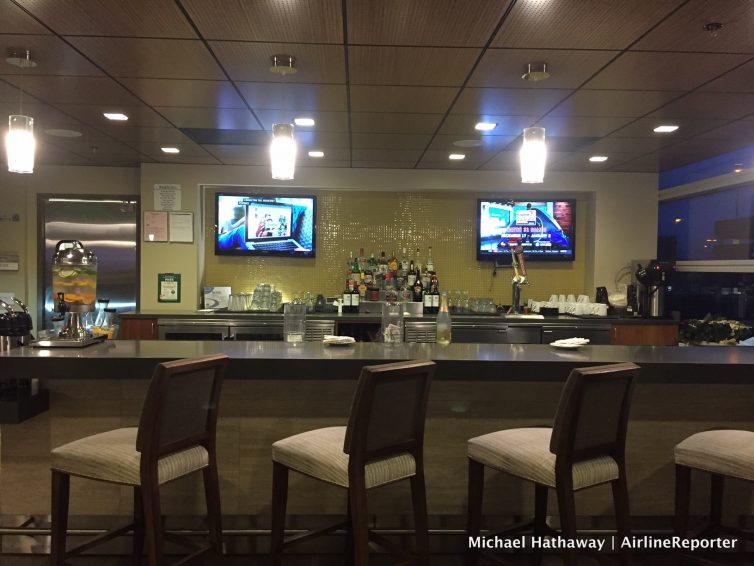 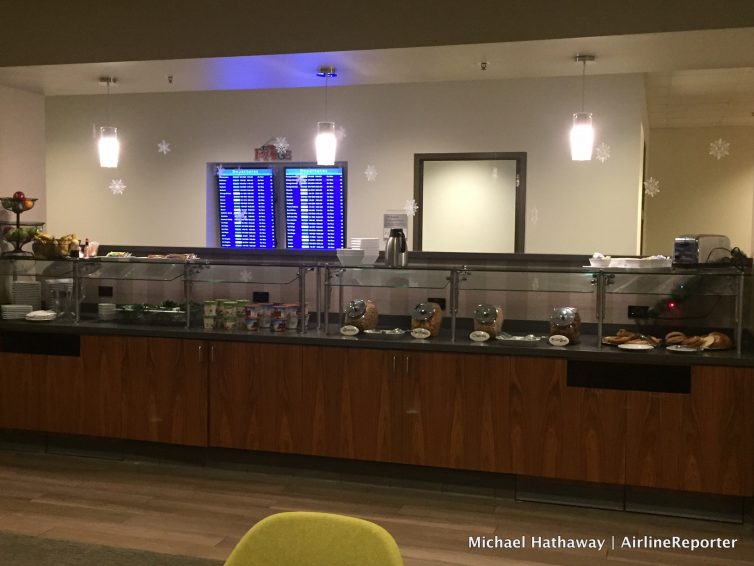 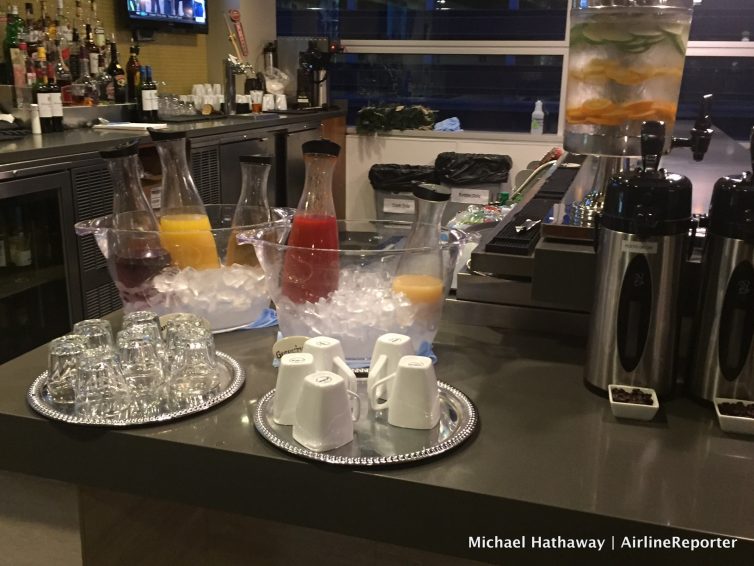 During peak times when International flights are operating, a full buffet is offered to visitors.  During more quiet times, light snacks are available.  I enjoyed some fresh pastries (they happily offered to warm them for me ’“ and their suggestion was very well worth it), coffee, and juice. All of the food and adult beverages are free.

The atmosphere when I visited was quiet.  It was still relatively early and not many long distance flights were going out at this time.  With upcoming service to EWR on Alaska and United starting in March, I can see it becoming busier during the early morning hours.

I enjoyed great conversation with the staff, walked around and checked out cool things such as the featured local art, sat in the different rooms in club, and of course ate more food. 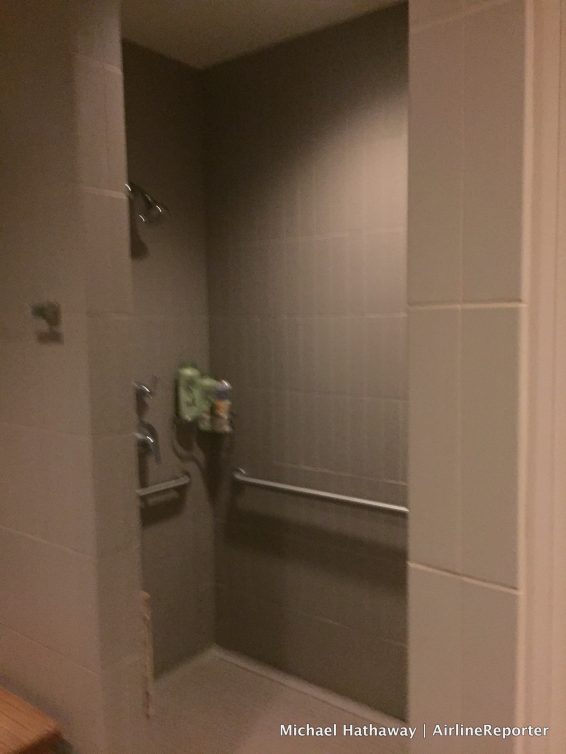 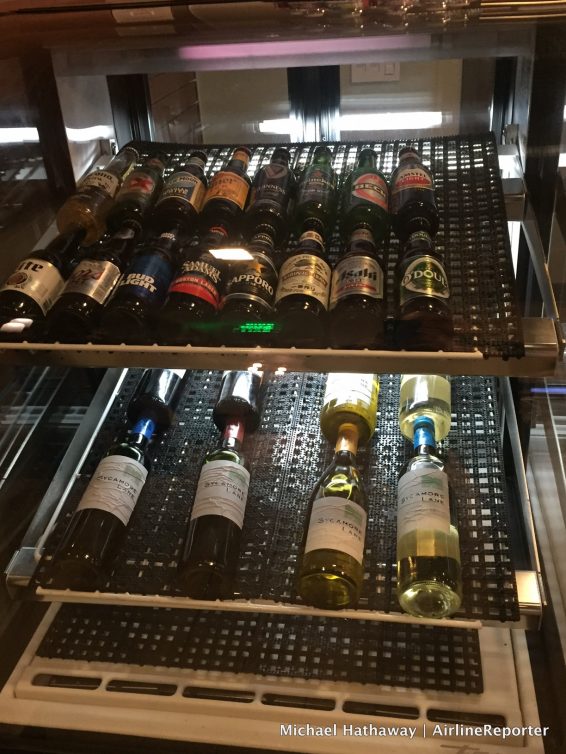 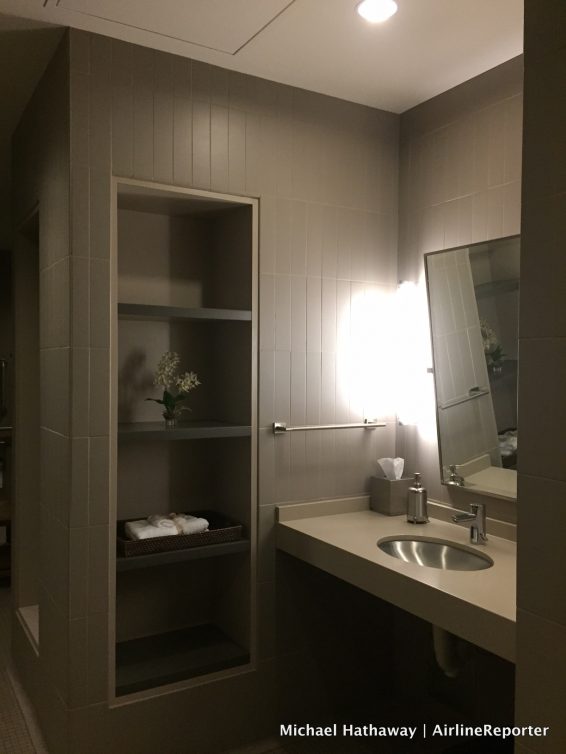 The staff were very gracious, welcoming, and very knowledgeable.  As an AvGeek, I find it refreshing to talk about airports and airlines with those who work in the industry that actually feel the same passion I do.  This staff did and it was great.

The Club at SJC is open to all passengers traveling through San Jose, and premium passengers on select international carriers can receive complimentary club access before their flights.  So what’s the cost? It is $40 for a day pass, which is less than most other lounges. If you have a few hours to burn at the airport, and you plan to eat (and drink) it can pay for itself. Add the comfort seating and if you are in need of a shower it is hard to go back to terminal seating.

Note: Admission to The Club at SJC was complimentary for this article.

This story was written by Michael Hathaway for AirlineReporter. He is an avid AvGeek and has been for as long as he can remember. Exploring new airports and cities is always high on his list or priorities as well as flying on many inaugural flights from his home airport of San Jose (SJC) that have included British Airways SJC-LHR and many more. When not traveling or plane spotting, he works in tech and enjoys great food and good wine.

https://www.airlinereporter.com
Are Low-Cost Airlines Taking Away the Charm of Flying?
Welcoming Polaris and the “New Spirit of United”
2 Comments

I think you mean in the “Lounge Club” network

Almost makes me miss SJC. Glad they wrapped up the interminable construction and things are looking up.