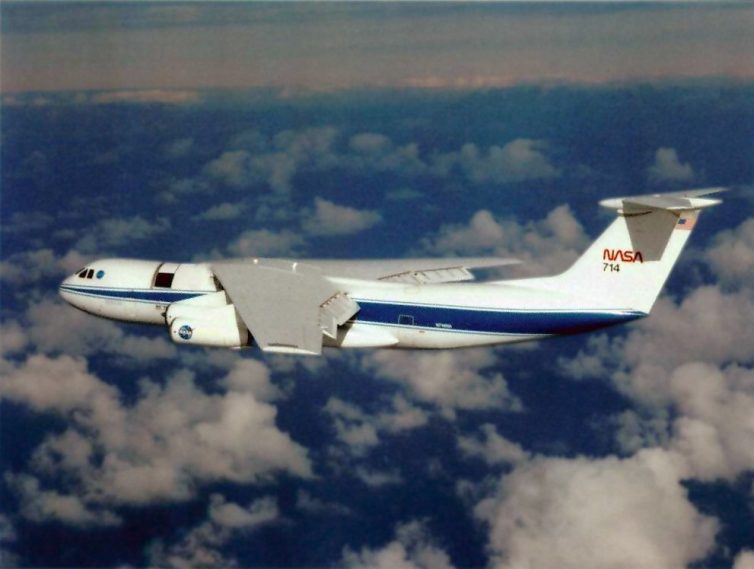 In 1966, Dr. Gerard Kuiper pointed a telescope out the window of a Convair 990. It wasn’t a large mirror (12 inches), but it proved that you could gather astronomical, infrared, data from an airplane.

Dr. Kuiper went to NASA with a proposal, and soon the same infrared telescope was flying aboard a NASA Learjet.

This proved so successful that NASA approved a larger aircraft – a C-141. Dr. Gerard Kuiper died in 1973, so he never got to see the Kuiper Airborne Observatory fly. And it flew until 2008.

The C-141-based observatory had a 36-inch aperture telescope, broadening the ability of NASA and astronomers to gather their data. Thing is, you can always use a bigger mirror – and it’s not like spare TF-33 and C-141 parts were getting easier to find.

There was a solution. 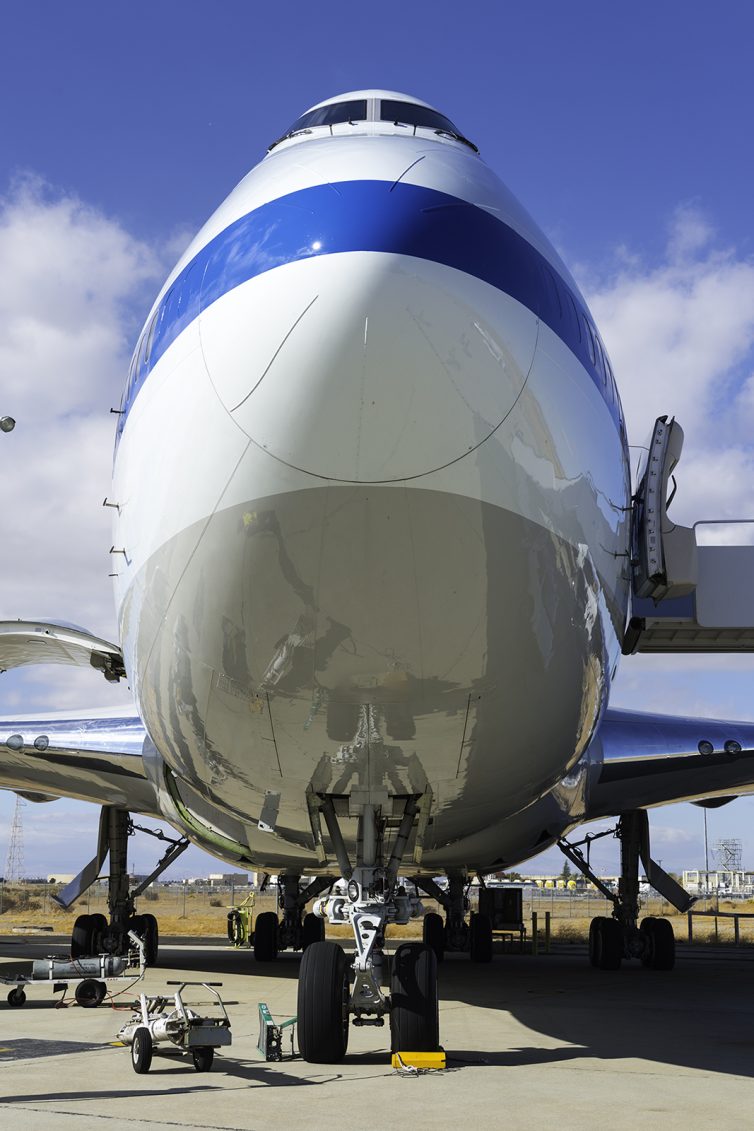 Originally built as N536PA (aka Clipper Lindbergh) for Pan American World Airways, it was sold to United and registered as N145UA on February 13, 1986.

The grand touring edition of the original 747, the SP is a shortened -100 with a longer vertical stabilizer. To deal with the demands of the higher gross weight needed, as well as longer engine runtime, it has a different variant of the Pratt & Whitney JT9 than the rest of the 747 fleet, the JT9D-7A. With only 45 747SP built, this makes spare parts for the -7A hard to come by; but we’ll get to that later. 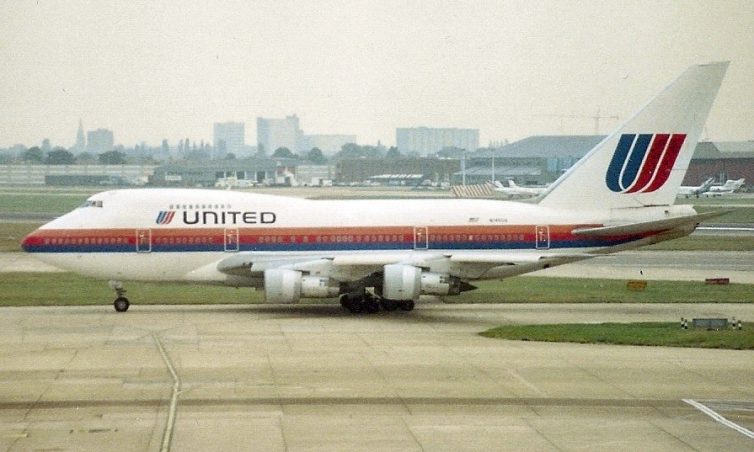 In United’s service it would operate routes such as San Francisco to Narita – nowhere near the edge of the payload range curve for the plane. To United, these inherited aircraft were not meeting their unit-cost goals.

NASA, the German Space Agency (DLR), and United began to discuss a new airborne observatory using one of their aircraft, a 747SP no less. Originally, the SOFIA project was supposed to be flown by United pilots and maintained by United mechanics. With the down-scaling of the airline industry after September 11, 2001, United abandoned their commitment. NASA did not. 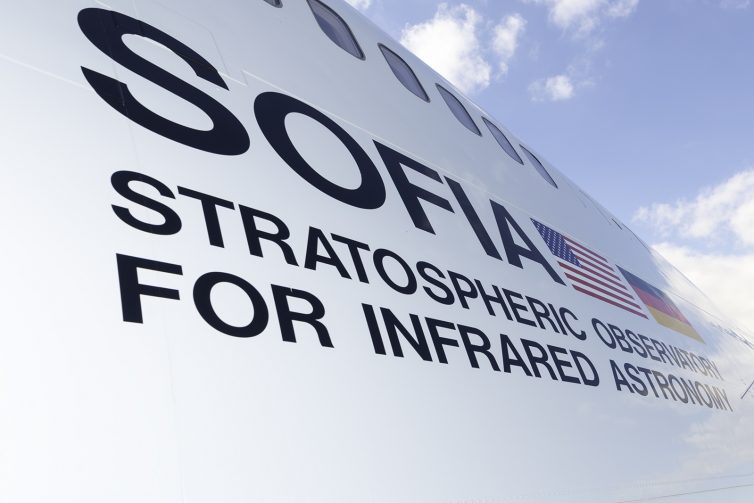 Just in case you forgot what this was – Photo: Bernie Leighton | AirlineReporter

Of course, this isn’t 1510 – we don’t just use eye pieces on a telescope. Also, can you imagine trying to focus a telescope, manually, as you move around it on a plane? Think of image stabilization on a camera lens. Imagine your camera lens is focused at targets literally thousands of light years away in some cases. You can’t do that with an off-the-shelf solution.

The telescope is steadied by an elaborate system of compressed air bladders and standard bearings. The bearings are extremely precise and well lubricated as they are only at a 50micron distance in terms of tolerance. This is expensive, and precise, stuff. The system is so responsive that the telescope stays still, almost floating inside the plane. In turbulence, you can see the cabin move around it. It takes quite a lot of bumping to throw it out of calibration for the flight.

Now remember, to top that all off – you are moving in one direction at mach 0.85 at up to 43,000 feet. The mirror and the assembly is heavy and has lots of long and flat surfaces. Can you say the potential for bending moments? I sure can!

This is measured by a series of fascinating gyroscopes. Some of which contain fiber optic cable to detect even the slightest change in relativistic effect of the photon’s travel through the cable to ascertain if things are heading out of whack. The damping occurs through the bearings and air bladders.

It’s PhD-level research to even design that sort of thing! Even if you are making use of already existing components, as the team that built the stabilizers for SOFIA did.

So, now that you know we put things other than the human eye on the end of telescopes, and that SOFIA’s is rock-steady, what goes on the end to collect the photons. Or radio waves, if you want to get all dualist on me?

This cycle, SOFIA has been flying with two primary instruments. 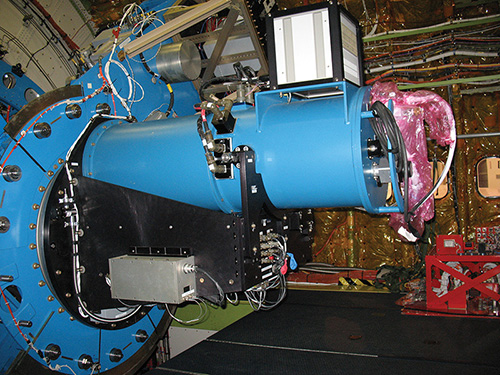 FLITECAM (aka First Light Infrared Test Camera): Well, NASA’s words do a great job describing this one – so here’s what NASA has to say:

“FLITECAM is an infrared camera operating in the 1.0 – 5.5 Î¼m waveband. It consists of a 1024×1024 InSb detector with 0.475”x0.475” pixels and uses refractive optics to provide an 8′ diameter field of view. The instrument has a set of filters for imaging, and grisms for moderate resolution spectroscopy. The filter suite consists of standard Barr filters used for imaging at J, H, K, L and M in one filter wheel. A second filter wheel holds a selection of narrow-band imaging filters including Pa-Î±, Pa-Î± continuum, 3.07 Î¼m H2O ice, 3.3 Î¼m PAH, L-narrow and M-narrow. Additionally there are order sorting filters for use with the grisms. A selection of three grisms is available to provide medium resolution (R â‰ˆ 1500) spectra over the entire wavelength range.”

But Bernie, what’s a grism?

Well, with a 2.5m mirror, it is focused at infinity (like any other telescope), the light is reflected into the completely horizontal tube FLITECAM is attached to. Now, for astronomy, especially infrared astronomy, one needs a diffraction grating of some sort. As I said before, the FLITECAM optical component is a straight line. We know that, due to the curious nature of the photon – a diffracted photon would go off at an angle. Therefore, this telescope uses a “grism” a diffraction grating on the hypotenuse of a prism allowing the collimated light to reach your sensor. 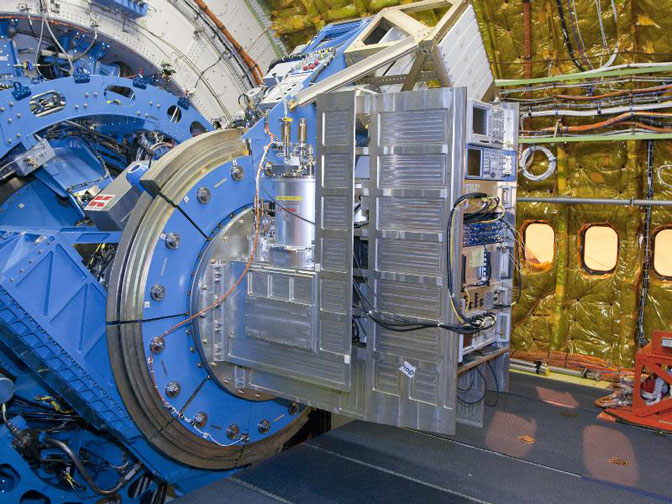 The second, German-designed, instrument is great. No, seriously.Â It’s GREAT: The German Receiver for Astronomy at Terahertz Frequencies. Again, NASA’s summary is fantastic:

“GREAT is a dual channel heterodyne instrument that will provide high resolution spectra (up to R=108) in several frequency windows in the 1.5â€’5 THz range. The front-end unit consists of two independent dewars, each containing a set of mixers. Offered for Cycle 4 are the L1 band (frequency range 1.25â€’1.52 THz), the L2 band (1.81â€’1.91 THz), and the H band (4.745 THz; 63.18 Î¼m). The new seven-beam array, upGREAT is expected to be offered in its Low Frequency Array mode for the [CII] line at 158 Î¼m. The backend for each mixer is a Fast Fourier Transform spectrometer (XFFTS). Each XFFTS has 2 GHz bandwidth and 64,000 channels providing a resolution of 44 kHz. The beam size of GREAT is diffraction limited (14.1â€ at 158 Î¼m).”

Terahertz radiation is on the opposite end of the spectrum from Infrared; this is getting into a more radio telescopic kind of observing. GREAT is so sensitive that on flights with it equipped, one cannot use the microwave. Until recently, the microwaves and the coffee makers shared the same circuit – so when the fuses were physically popped as an extra layer of RF emission protection, no one could even have coffee.

The telescope weighs 17 tons, and to balance this zone A of the aircraft has steel plated floors, numerous electronics racks, and periodic placement of around 881lbs of tungsten-steel alloy to balance the ship.

So, what does it look at? 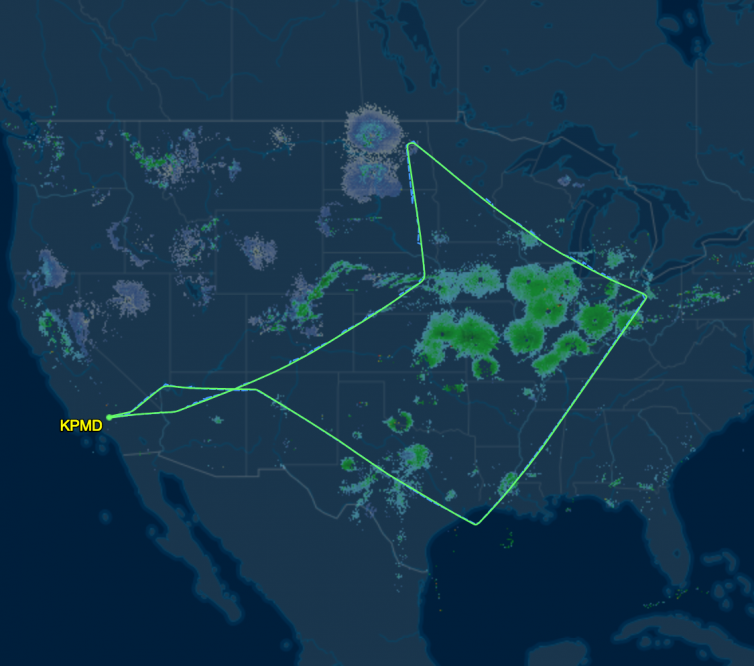 Flightaware does a better job of showing our total track. 18 states in under ten hours! Image: Flightaware

On our quest to find Polycyclic Aromatic Hydrocarbons (jokingly calledÂ “space smog”) we would take off from Palmdale and fly over Arizona towards Colorado to gaze upon a “Calibration” star. In this case, a calibration constellation. Draco, if you must know.

It makes sense to include a calibration leg in a research flight. First, it’s good to make sure your instrument is working. Secondly, there was not budget available to pre-chill the mirror. This means that once the door is open and the mirror begins to cool, there can still be some condensation upon it which can create ghost images. You want those to either be known and eliminated, or dissipate before you start collecting real data.

From there, we would move on to Westerhout 3, a large star-forming region and molecular cloud – potentially rich in PAH! Only 6,200 light years away.

Leg six would take us to a planetary nebula containing a dying sun-like star that was spewing copious gases. We would also climb. As the aircraft becomes lighter, you can reach higher altitudes. The last legs would be conducted all the way up at 43,000 feet.

Legs seven and eight would be the asteroids 65 Cybele and 4 Vesta. They’re lovely, luminous, and carbonaceous. Who doesn’t want to take a peek? They are also both within our solar system’s asteroid belt. 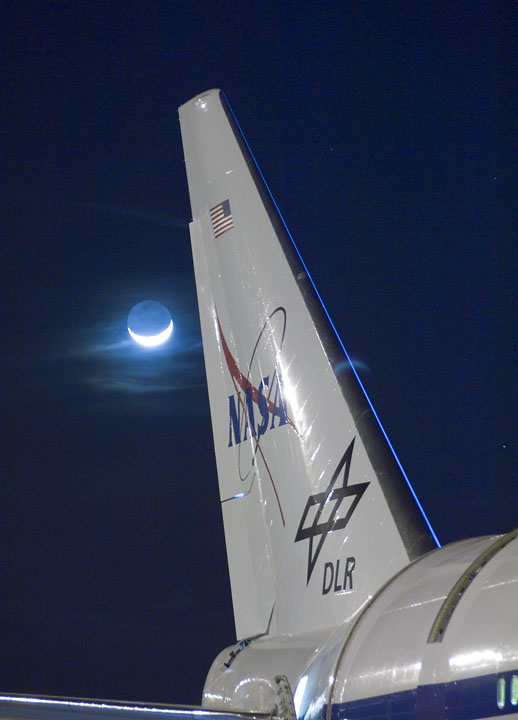 Leg nine would be a calibration star for the grisms as Theta Leporis has very few spectral lines making it easy to ascertain the validity of the instrumentation.

This would set up for the final 43,000 foot leg looking at NGC2024, better known as the Flame Nebula. So, now that you know what we were going up to look at. What is it like on board?

It’s a pirate ship full of candy!Â How so? Take a look at Part 2, which covers my awesome flight on the aircraft!

Thank you, R. Lopaka, for the history of this 747SP. This makes it one of the only former Pan Am planes still flying.

Is the correct size given for FLITECAM’s pixels? A 1024×1024 array of those pixels would have a 57 foot diagonal.