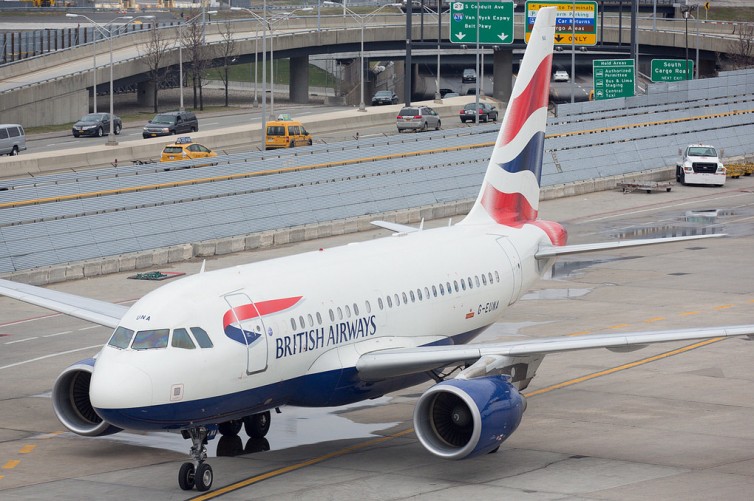 When it comes to long-haul flying, typically the bigger the aircraft the better. Whether it’s the Boeing 747 or Airbus A380, these are the aircraft typically associated with extreme luxury – private suites, on-board showers, and maybe even a fully stocked bar. Sometimes, though, smaller might actually be better. British Airways operates a pair of tiny Airbus A318s between New York JFK and London City Airport (LCY) with a business class-only configuration featuring only 32 seats (by comparison, Air France carries 131 passengers on their A318s). It sure is a strange (but great) way to fly. To give you a sense of just how small the A318 is, here are some numbers to help size it up: The Airbus A380 sports a total length of 238 feet with a 261-foot wingspan. The A318 is just 103 feet long with a wingspan of just under 112 feet. 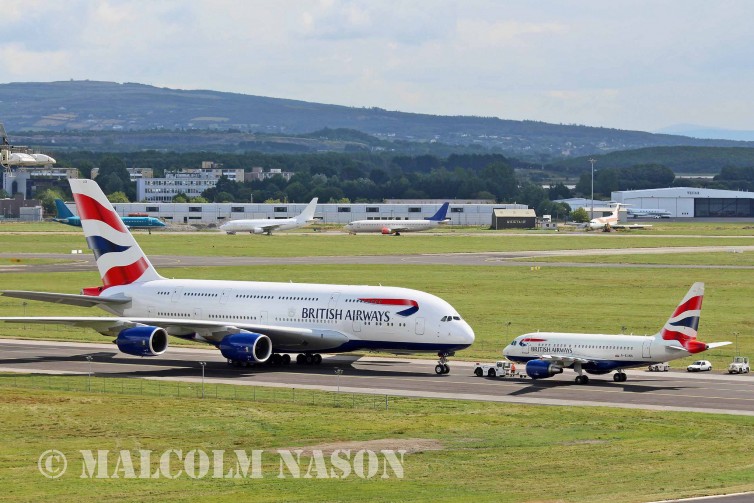 A British Airways A318 nose-to-nose with an A380 – Photo: Malcolm Nason

BRITISH AIRWAYS A318 FLIGHT: The Lounge at JFK

The experience begins before the flight at the spacious JFK Terraces Lounge, which features self-service bars (including craft beer on tap!), showers, a spa, and a full buffet-style dinner service. Business class passengers are entitled to a free 15-minute massage at the spa, which was fantastic after a long day of work and a subway ride to the airport. After the massage, I hit the buffet for a delicious meal. For short transatlantic flights (maybe six hours), a true pre-flight meal is a major perk. Dining before the flight enables passengers to maximize their sleep time on board – this is something many airlines still have not figured out. A meal served on the ground is a heck of a lot cheaper than a catered meal on board, so this almost seems like a no-brainer for airlines to offer. 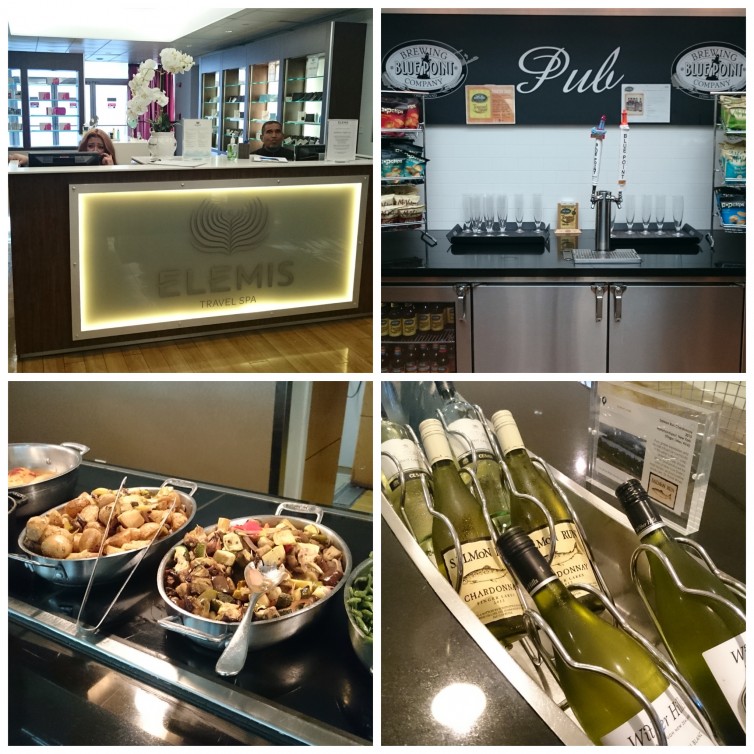 The lounge, with real food and drink options, at JFK – Photo: Jason Rabinowitz

As opposed to the hectic boarding process of a 747, the 32-seat A318 takes just minutes to button up. It’s clear that this particular flight has a number of repeat customers on board, as there were a few “hey Jim” moments where a few passengers just happened to know each other. It even seemed that several passengers had their “preferred” seats on board. 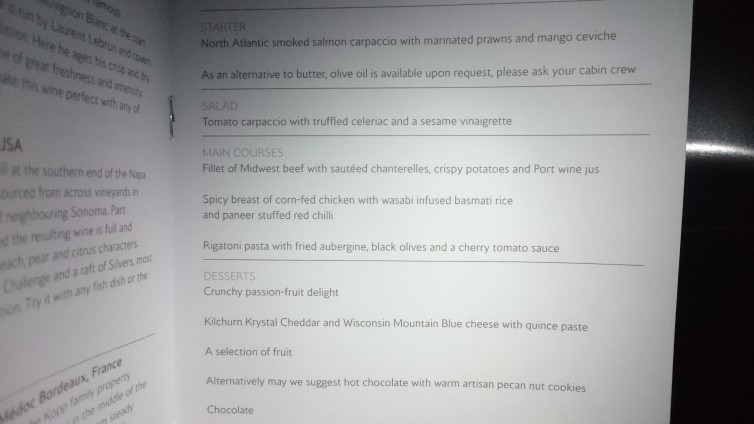 The menu on my British Airways A318 flight – Photo: Jason Rabinowitz

BRITISH AIRWAYS A318 FLIGHT: The Flight

Once aloft, a very quick meal service began for those who didn’t have time (or desire) to eat at the lounge. I resisted the urge and intoxicating smells from the galley, and decided to watch a movie before trying to sleep.

Since this aircraft has no built-in in-flight entertainment, due to weight restrictions, iPads are distributed. No announcement was made that they were available, but thankfully I knew they were offered. Unfortunately, I had to wait quite a while to get mine since the flight attendants were occupied serving dinner.

Oh, look. A dedicated holder for the iPad! If only anyone had told me about it…

A quick snack after my nap

Propping up the iPad on a tray table, even if it has a case designed to stand on its on, is annoying. The viewing angle is never adequate and they easily fall over. I was frustrated. When I took a quick trip to the lav, I noticed that some passengers had their iPad secured in a very sturdy looking arm. What the?! Somehow, after two entire flights and part of a third, nobody told me that there was a specially designed iPad holder in the center console of the seat. This makes me believe that either the flight crew doesn’t know those holders exist, or simply didn’t care to tell me. Either way, that’s no good. 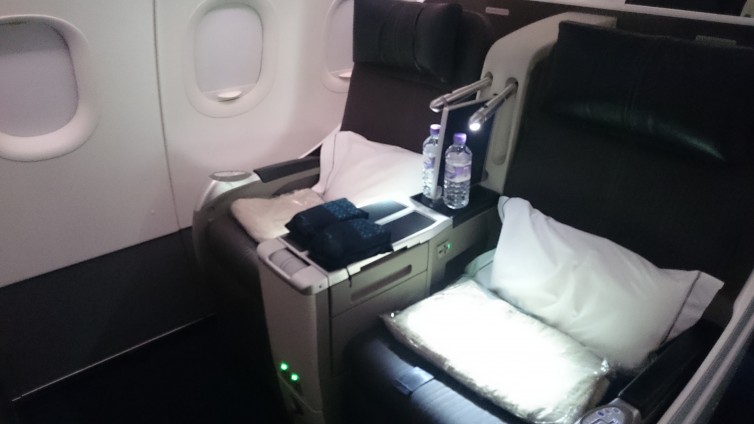 A comfy 2-2 layout on the A318. None of that forward-reverse seating awkwardness – Photo: Jason Rabinowitz

Once I decided to try to take a nap, the reality of how spacious the A318 Club World seat is over the rest of the British Airways fleet sank in. I actually had flat surfaces to put my things on! There’s even a dedicated “spectacle” holder. I was not really able to sleep on the flight (what else is new), but the seat is plenty comfy for those who can. 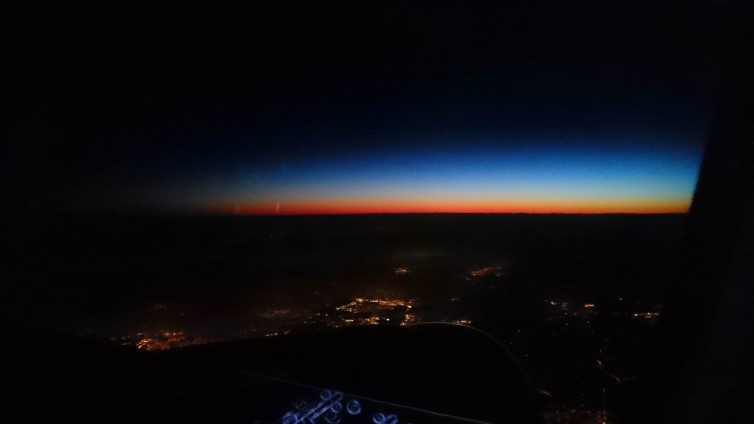 The beautiful colors, while flying on the A318 – Photo: Jason Rabinowitz

Approach to London City is another aspect where the A318 flight sets itself apart from all other flights. Unlike Heathrow, there’s no 30-minute holding pattern before landing. Just a totally awesome 5.5 degree (steep!) approach on the largest aircraft certified to land at London City.

Arrival at London City is a breeze, once again trumping Heathrow. Customs took all of five minutes, and connections to the Docklands Light Railway into the heart of London are super simple. I would be taking a quick detour, however. 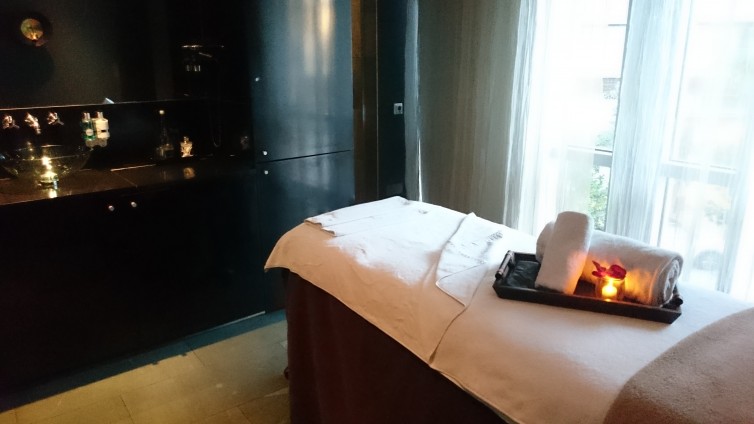 The super relaxing spa room at the Radisson Blu, which acts as the arrivals lounge

Because London City isn’t big enough to house an arrivals lounge, British Airways shuttles passengers in a private car over to the Radisson Blu. Once I arrived, I was set up in one of the hotel’s spa rooms to take a shower, hit the breakfast buffet, and generally get my act together. I must say, it was all quite civilized and very refreshing after a red-eye flight.

It’s clear that the Club World London City service has a very specific target market in mind – those with corporate contracts and super commuters. However, you shouldn’t let that deter you from booking this service if possible. I know I enjoyed the flight and there is probably not a quicker, more efficient way to get across the “pond” than the British Airways A318 flight (well, other than the Concorde, but that is no longer an option).

NOTE: Flight was covered by British Airways. All opinions are the author’s.

Cool review and story. I just wish that I would fly on something like this. I just could never afford it, nor would my business put me on it. Almost like a tease.

Save up those miles!

How many flight attendants for 32 seats? I don’t see why someone could not give the ipad before the meal was over or even before it started. Was it not offered upon embarkation or did you not think to ask until the meal started?

Most of your flight review stories have a disclaimer of who paid for the flight and all reviews are of the author. I don’t see one in this story and it would be nice to know.

You are correct about the disclaimer, leaving it off was not intentional, but my fault! I have added it.

great service for a a small plane

Excellent report, Jason. However, missing is the typical cost of this “J” service from BA. I used it a few times, the last being a bit more than a year ago and gave it up because the fare was always high-end of “J Class” and the JFK connection was difficult to make. When it works, it is a grand idea, but you should say something about about the fares. I also have mixed feelings about eating before boarding or while flying. It depends upon the menu which is NOT easy to obtain from BA. There are benefits to having only 31 others on your airplane, but I’m not sure that the high-end “J” fare justifies most of them. So… What was the published fare on your travel dates? -C.

Just an fyi for any future readers. The tickets on this plane are $10k a piece. So just letting ya know that if you wanna fly business to the UK just go on a normal plane. You’ll save about $9k.

You don’t fly across the pond in Biz class for cheap. Not non-stop in particular.

Flights can be expensive, but you can also get a good deal. I just booked flying JER-LGW/LHR-MAN-PHL-LAX-PDX returning PDX-LAX-JFK-LCY on the babybus for $1.6k (£1.230), really looking forward to the babybus flight into LCY hence I came across this review in my search. Appreciate that flights going in the opposite direction (I.e. USA to London and back) are more expensive.