ANA’s Star Wars R2-D2 arrivesÂ to gate S16 at SeaTac. This was the first time the aircraft had been deployed to Seattle.

My initialÂ assignment, with AirlineReporter long ago, was to cover the arrival of the first ANA 787 to Seattle. It is befitting that my long history with AirlineReporter officially ends with another ANA 787; this time though it is the ultimate 787 – the R2-D2 Star Wars jet.

The special 787-9 rolled out in October and beganÂ service later that month to Vancouver. Â Now that it is operating out in the wild, I eagerly awaited my opportunity to spot it in myÂ current hometown of Seattle. Being a Star Wars and Astromech droid fan myself (R5s are better than R2s in my opinion), how could I not take this on? 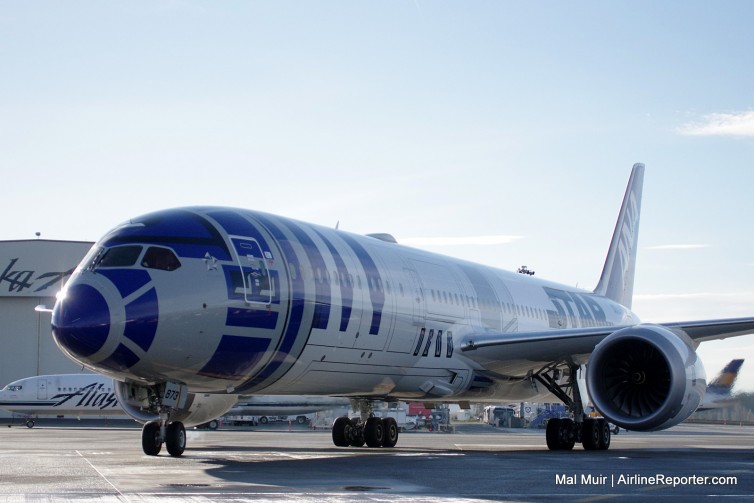 Because of the prevailing winds during the wintertime, it is not uncommon for the flight toÂ arrive up to an hour early from Narita. Although early arrivals areÂ fantastic news for passengers, they are not so fantastic for plane spotting, as they add an additional variable to getting that elusive photo. I was invited by the airport to view the aircraft landing from the ramp and we made it out just as it turned onto the taxiway. Â As the plane arrived at the gate, we were greeted by some surprises – the Dark Lords of the Sith. Well, really just some ramp agents having a bit of fun for this unique arrival. 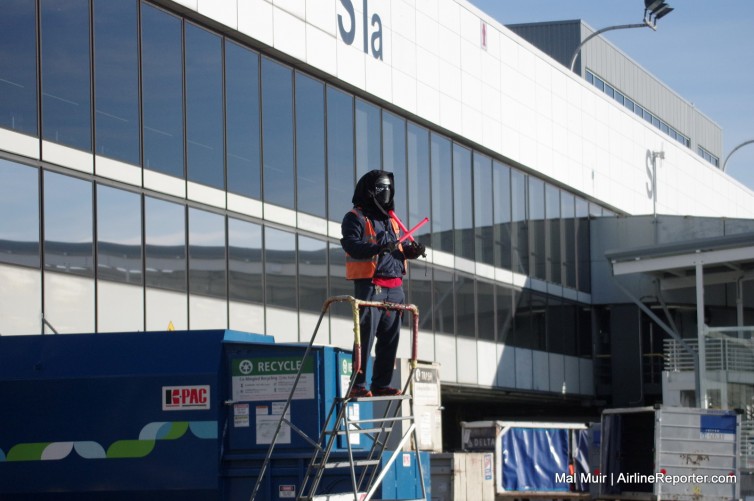 HO NO — a Dark Lord of the Sith has found it’s way onto the ramp! Nah, people went full out Star Wars for the visit.

Although the flight was an exciting event for us in Seattle, it was operated pretty much the same way as any other flight – there wasnâ€™t much in the way of pomp and circumstance. Â Well, except for R2-D2 hanging out on the ramp with me. The special liveryÂ did draw quite a crowd both in the airport and on the ramp with manyÂ people wanting to stop for a photo.

Although the in-flightÂ experience goes beyond the special Star Wars livery, it is nowhere near as immersive as Eva Air’s Hello Kitty experience. The aircraft features special headrests, cups, and napkins in economy that look like our small white and blue friend. Business class passengers get a special treat as they get to ride with a life size Yoda!Â The small green Jedi rides in a business class seat (if one is available). Maybe he will teach us the ways of the force? Probably not!

As a special promotion, during the month of December, all six currently released Star Wars films will be availableÂ to view while flyingÂ ANA internationally. Â Now that is some good in-flight entertainment! 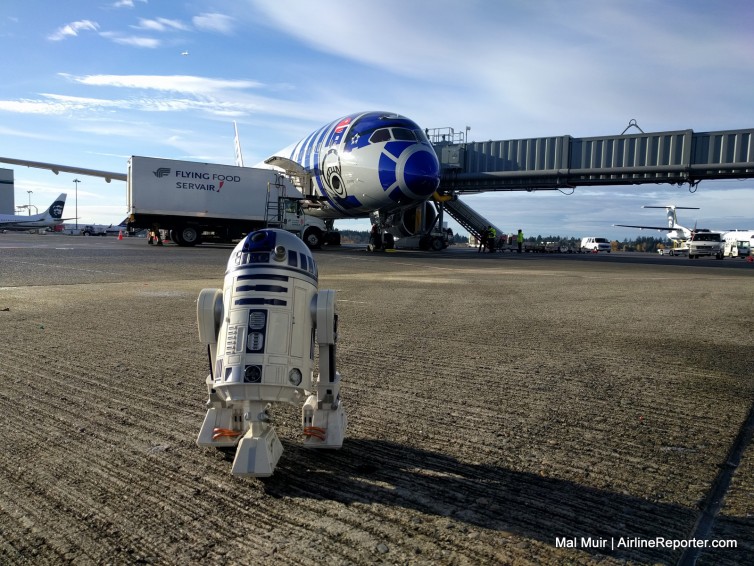 As the aircraft departed Seattle, people stopped to take more photos or do a double take as it taxied by.Â I was happy to catch one ofÂ those perfect take off shots (which are never easy in Seattle).Â I will definitely be trying to watch for and photograph this plane as much as I possibly can. 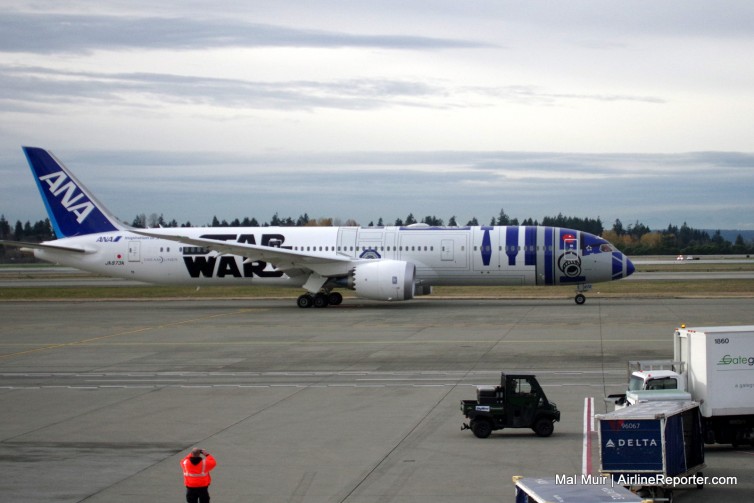 After this brief stint in Seattle, the R2-D2 787 will embark on an exciting new route. On the 11thÂ of December, ANA will inaugurate service to Sydney and what better plane to use than this one? This will be ANA’sÂ first time back down under in almost 16 years!

For those of you in the USÂ wanting more Star Wars liveries, don’t fret, another livery in our midst soon enough. 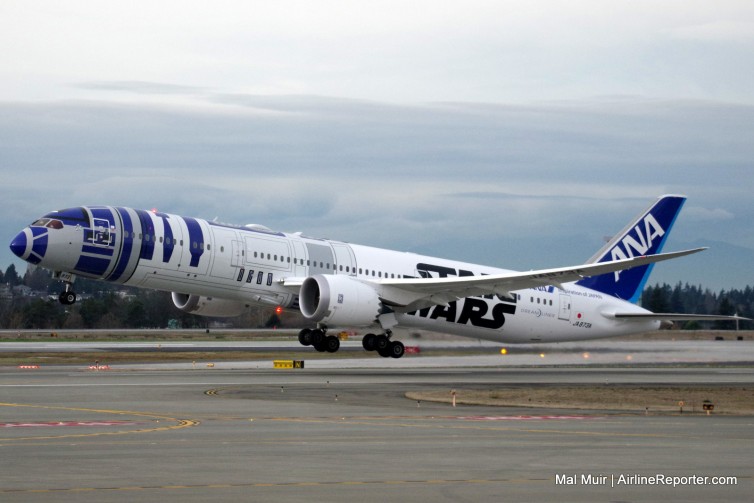 The lastÂ of the threeÂ Star Wars jets (the second one is a 767, currently serving domestic routes in Japan) will be a 777-300ER. This jet will featureÂ BB-8, the newest droidÂ from the upcomingÂ Star Wars film, The Force Awakens. Â It will mainly serve North American routes such asÂ New York, Chicago, Houston, Los Angeles, andÂ San Francisco.

Although this was my last official foray for AirlineReporter, it will not be the last for an ANA Star Wars jet in the US and sure as heck not the last time I take some time and go spotting them.

Until Next Time Mal!

David’s note: A big thanks toÂ Mal for all of hisÂ contributions he has given AirlineReporter. He was the first writer to start writing for meÂ and due to his passion and awesome work, helped to build us to where we are today. Of course we shall remain friends and I look forward to hearing more about your adventures! The best of luck.Â

Blaine’s note:Â Mal was the first person from AirlineReporter that I actually met in person, years ago. Â As irony would have it, it was on an ANA 787Â inauguralÂ flight. Â He was in business, me in coach, and he taunted me over the seat-to-seat texting system. Â It was good fun. Â We’ll miss you, Mal.

Bernie’s note: Mal approached stories from a completely different angle than I would. I’ll miss someone who actually attempted to quantify who had the best airline pyjamas (but missed Etihad’s) or explained the reasoning behind coffee cups.

I was on this flight (seating in 3A), it was indeed a wonderful experience~

Thanks Fred. It was always a pleasure to write what I felt and what I experienced.

I have enjoyed your stories Mal – just the right amount of humour! Keeping filling your pajama drawer!

I and my wife were also on this flight, although by accident. We were flying back to Spokane from Singapore via Narita. We were in the ANA lounge for about 5 hours in a layover and were told our flight to Seattle would be leaving at gate 54. After landing in Narita and taxing to our gate I had spotted the R2D2 setting next to the taxiway. The ANA lounge is right above gate 54. About an hour before our departure a tug came pulling in R2D2 to the gate. A BIG surprise! Not a good flight for us as our seats, 8A and 9C, were right next to the RR port engine and it was a very noisy trip. I had my noise cancelling headset but my wife did not and ones provided by ANA are not very good.